Thankful for their special gift

Their baby could not be saved, but couple wants to help others facing loss

Everyone loves an uplifting, beat-the-odds kind of tale. But what about those stories that take a different, less joyful turn? Are they any less inspiring?

Alysen Shields and her husband, Gareth, would tell you absolutely not. 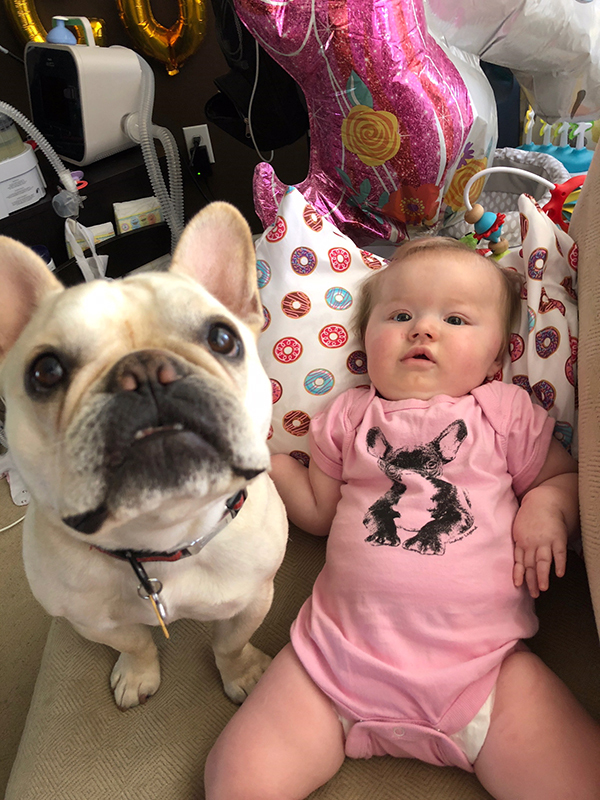 Theirs is the story of a little girl named Corinne, Cori for short. A baby who filled their lives with joy and laughter, albeit mixed with pain and sorrow during her time here.

Still, they are better for the journey, they believe.

It was a normal pregnancy, Alysen recalled. As a labor and delivery nurse at IU Health Methodist Hospital, she knew pretty much what to expect when it came time for her daughter to be born in October 2017 at IU Health North.

There were no issues with the birth, but the questions would soon begin. Cori, born at 6 pounds, 12 ounces, had trouble breastfeeding. The couple supplemented with formula, but their baby still was slow to gain weight.

At Cori’s one-month checkup, her mom pointed out her daughter’s floppy wrists but was relieved when her pediatrician suggested it was just a lack of muscle tone due to her small size and slow growth.

By her two-month appointment, the newborn seemed to have turned a corner with eating, but she wasn’t doing much else. During tummy time, she didn’t even try to lift her head. Perhaps some genetic testing was in order, her doctor suggested. The first available appointment was months out.

Alysen, a first-time mom, tried to keep her fears at bay, but Cori’s appetite soon took a turn for the worse. She was put on antibiotics to treat what they thought was a cold. When that failed to make a difference, Alysen took her back to the doctor, where it was determined her size had dropped below the standard growth curve. It was a case of failure to thrive, a term used to describe children whose growth appears to have stopped or reversed, often for unknown reasons.

Barely a day after being admitted, Cori was in the NICU, on respiratory support and a feeding tube.

A new drug called Spinraza was approved by the FDA for treating SMA, but the family had to go to Chicago’s Lurie Children’s Hospital for a clinical trial.

It would be more than two months before they would return to Riley, and by that time, they had already initiated talks with the palliative care team.

That’s where Dr. Adam Hill, division chief of pediatric palliative care at Riley, stepped in with his team to help.

“We met Alysen and Gareth in the pediatric intensive care unit of the hospital, after returning from a clinical trial,” he said. “In our initial meetings, we helped offer them support surrounding the serious news of their daughter’s medical condition (SMA). We helped to advocate for them along the lines of their medical goals of care, and helped them to make future medical decisions for her and their family.”

People often think palliative care is the same as hospice, Alysen said. “They think it all just means end of life. But from the early days when we learned she had this long-term chronic disease and we didn’t know where it was going to go or what each day would hold, they’ve been such a huge advocate. They listen, they’re unbiased and nonjudgmental. They just care about you and your family.”

And most important of all, they helped get their little girl home.

After deciding against a tracheotomy for Cori, Alysen and Gareth prepared to keep her comfortable at home, continuing the one-hour breaks from BiPAP breathing therapy three times a day. They knew it wasn’t a long-term solution, but it was best for her, they believed. They tried to keep her needs at the center of every decision.

“She’s a baby, I want her to be a baby,” Alysen said, when making the case for taking her daughter home. “She should be in her house with her family and her dog and just be able to be outside if she wants and take a bath and be held and be loved on.” 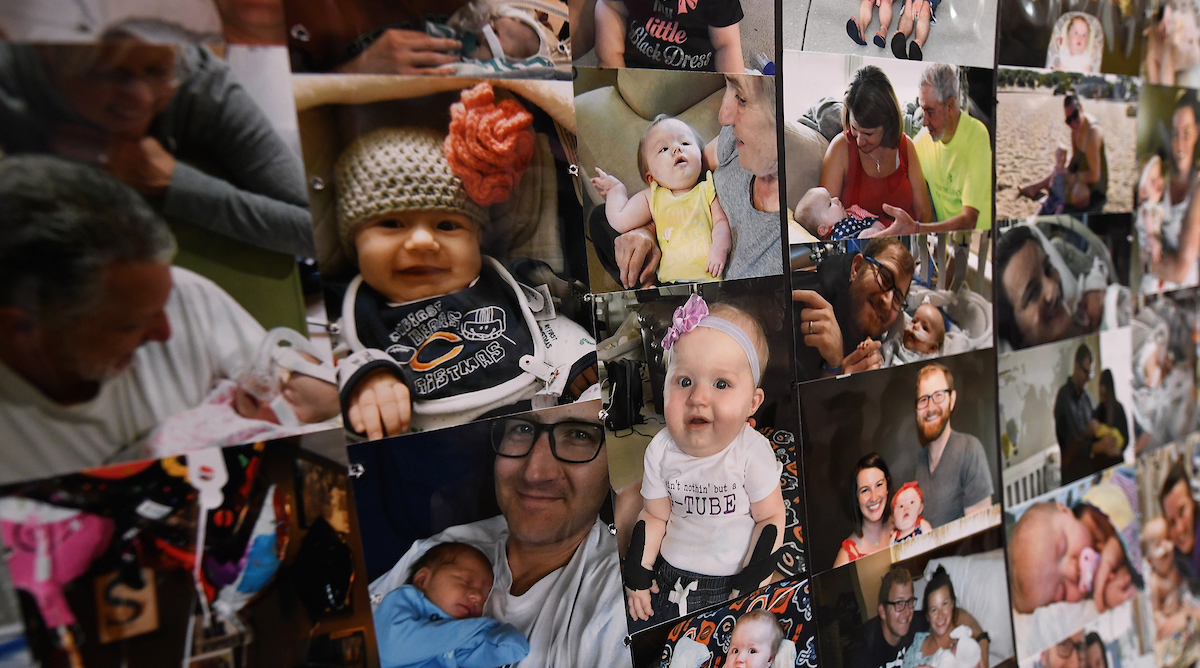 Cori went home on May 18, where her parents and extended family took turns spoiling her. In June, she had a follow-up appointment at the hospital, where it was determined that the Spinraza treatments had not helped.

But Alysen and Gareth already knew. Their tiny daughter, who used to laugh and smile, who loved nothing more than to be cuddled and read to, had lost her ability to smile. She became increasingly fussy. Even on her best days, her mom said, she was working really hard to breathe.

“In early July, we transitioned to hospice to make sure she was always comfortable,” Alysen said. The palliative/hospice care team was with them “in some of the worst times of our life and they supported us.”

The care team worked with the family to keep Cori comfortable at home “so that she could live her best life possible, every single day,” Dr. Hill said. “When it became clear that Cori would not survive her medical condition, we were able to be present at the home the day she passed away to make sure she was comfortable and the family was well-supported.”

Cori died Aug. 10, 2018. She was just over 10 months old. But that’s not the end of her story. She lives on in the hearts of many, including Dr. Hill, who still keeps in touch with the couple. 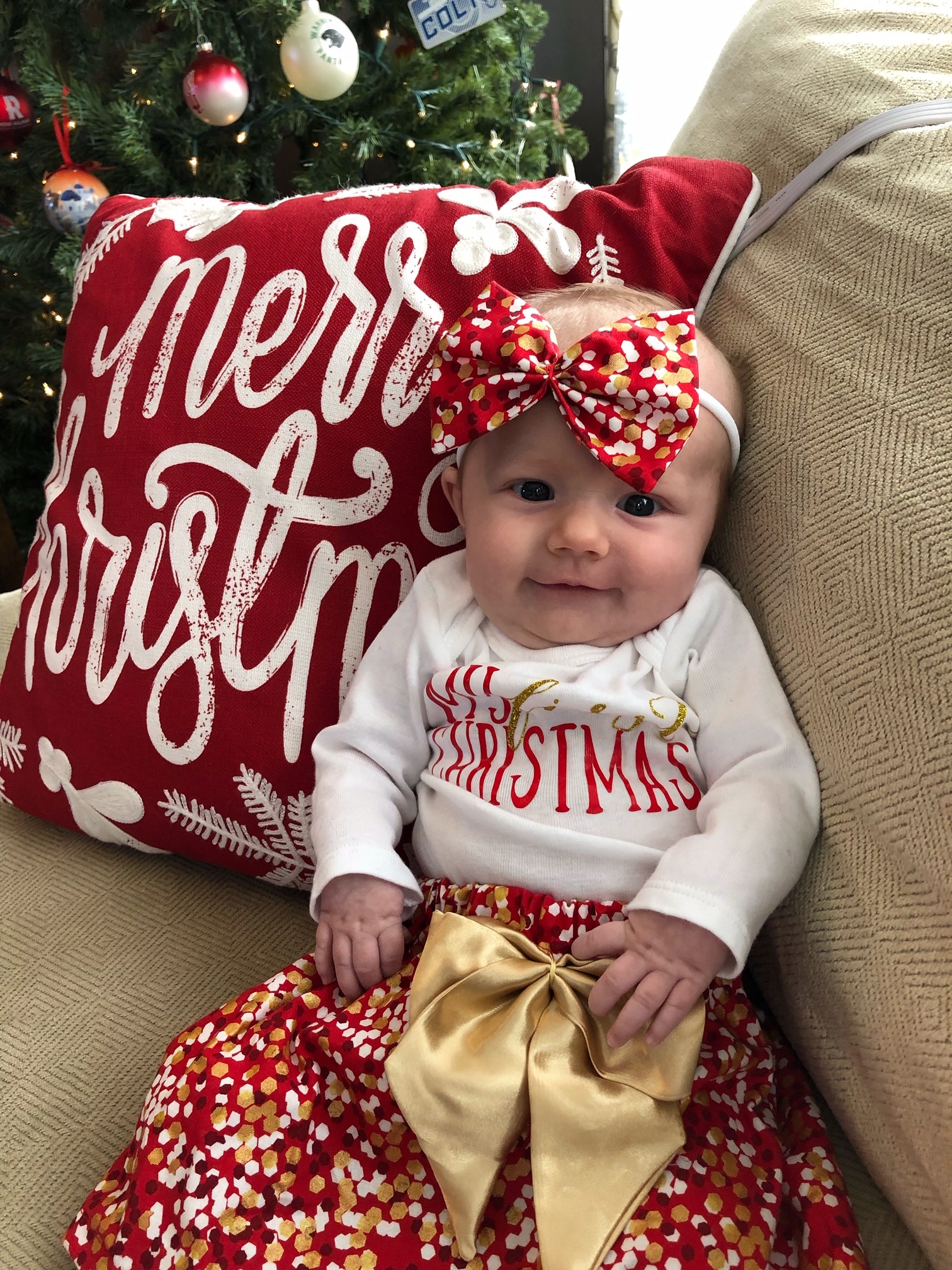 Corinne Elizabeth Shields celebrated one Christmas with her family. Her parents didn’t know it would be her last, but they are thankful for that one gift, that one special holiday.

Ornaments bearing her name decorate the tree in their Lawrence home this year, and their hearts are full, even as they grieve their loss.

Their faith helps get them through the hardest days, Alysen said. “We know where our strength comes from.”

That and the support of their friends and family, who love to talk about Cori and share memories.

“We miss her obviously, but we know where she is and we know we’ll see her again. We’re just thankful every day for the time we had with her. She was definitely a special little girl; she made a huge impact in 10 months.”

Their goal in sharing their story is to be a light in other families’ darkness, whether they are dealing with SMA, like Cori, or another life-threatening disease. They want people to know the value of palliative care and the tremendous support it offers to families facing difficult decisions.

“We felt if we could just make even the tiniest difference in someone else’s life who has dealt with loss or something similar, we want people to know there’s not a wrong decision when you’re making it for someone you love and care about,” Alysen said.

“She was so important to us and she had a lot going on, but our only job was to love her, and that was the easiest thing in the world.”