Rachel Houser, 15, visited her pediatrician for what she thought was a routine physical. The exam may have saved her life. When a lump was discovered on her neck, Houser underwent an ultrasound that detected thyroid cancer. After two surgeries at Riley Hospital for Children at IU Health and radioactive iodine treatments, Houser is now cancer free.

She’ll celebrate her “Sweet 16” this week and is looking forward to a trip to Disney but until recently, Rachel Houser’s plans were uncertain. She was focused on treatments for thyroid cancer. 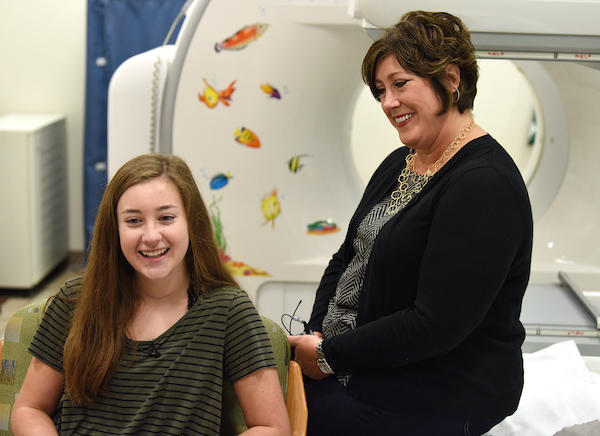 “We just ran in for a quick annual physical. It’s a good reason to always get an annual exam,” said Maureen Houser. “I didn’t even know what a thyroid was,” added Rachel, describing that day last September when life as she knew it, was interrupted.

Rachel felt fine going into the exam. She was a busy freshman at Fishers High School, hanging out with her friends and showing lamas at local fairs. But Gollnick felt a lump on the side of Houser’s neck. Two days later she went in for an ultrasound and on Sept. 23, she came to Riley and met with Dr. Ben James.

“In the pediatric population, thyroid cancer accounts for about seven percent of all cancers,” said James, who performed a seven-hour surgery on Houser to remove the lymph nodes in her neck. It was one of two operations. Next she began radioactive iodine treatments to clear any remaining cancer cells.

“She had extensive cancer which is not unusual with pediatric thyroid but the mortality rate is almost zero. It’s usually more aggressive up front,” said James. 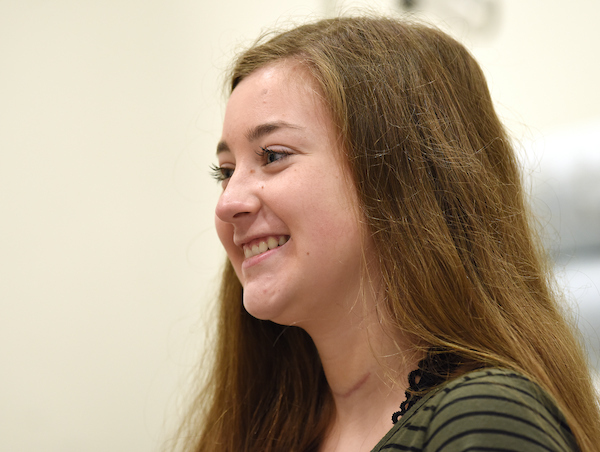 On her first day of summer vacation, Houser returned to Riley for a check-up with James. Her blue eyes sparkled as he said: “She’s recovered well and appears to be cancer free.” The only thing that remains is a small scar on her neck that James says will fade over time.

While Houser’s cancer was detected during a physical exam, James said routine screenings for thyroid cancer are not recommended.

“If you have a mass that is non mobile and doesn’t decrease over time then you may want to consult your doctor who may recommend an ultrasound,” said James, who has written a book chapter on pediatric thyroid cancer. In all of his work James said “I’ve never had a kid respond as well as she has. Her energy and attitude have been the best.”

Other than feeling tired and missing school after surgeries, Houser was determined to stay on track to recovery. She says her friends were a big part of her recovery.

When she was secluded after her iodine treatments, her friends gathered outside her bedroom window serenading her. They brought her gifts and sent snap chats to keep in touch.

And when she got back on her feet House participated in a dance marathon and fashion show, both supporting Riley Hospital.

“I may have participated before but it wouldn’t have had such a deep impact,” said House, the little sister of a brother and sister, both attending Indiana University.

Uncertain what she might do after high school, Houser says for now she’s looking forward to enjoying her summer break - driving with her learner permit, showing her lamas, attending science camp and . . . celebrating her 16thbirthday with a trip to Disney.

A Look at a Leader, Meredith McMahan, RN

McMahan talks about her own experience with cancer, and how that enabled her to relate to her own patients battling cancer.

Cancer can impact even the youngest of us. According to the U.S. National Library of Medicine,...