Teen Tree Parachuter Came To Riley A Paraplegic. Then, He Walked Out

Alex Kingsbury, 14, lay on his back on the ground unable to move after falling out of a tree. He thought he must be dreaming. He wasn’t. Alex was in the midst of a real life nightmare.

There it was towering right in front of him -- the perfect tree -- hidden back in the woods of rural Columbus, Ind.

It was skinny and tall and had those bendable limbs just perfect for what 14-year-old Alex Kingsbury had in mind.

He climbed up to the top, nearly 20 feet high. Once there, Alex went to swing his legs over a limb so the weight of his body would lower the limb down to the ground.

But when he tried to hook his legs, the tree snapped. Alex tumbled to the ground. And then, he stayed there – not moving at all.

His 13-year-old brother, Joseph, chuckled to himself as Alex lay on his back on a bed of pine needles and sticks and clumps of dirt.

Such a goofy jokester, Joseph thought.

“But when I went over to him, he literally couldn’t move at all,” Joseph says. “That’s when I knew something was wrong.”

Alex’ dad, Aaron, came over to his son and asked him to move his legs.

“I couldn’t,” Alex says. He couldn’t move his fingers or toes, either. “I asked my dad if I was dreaming. I thought, ‘I’ve got to be dreaming.’ I never thought this would happen to me.”

Alex wasn’t dreaming. He was in the midst of a real life nightmare.

With one tree climb, Alex Kingsbury, a strong, rambunctious athlete with a heart of gold, was a paraplegic.

Mindy Kingsbury was inside a friend’s house next to those woods on that fall Sunday afternoon. The Kingsbury family had come to have lunch with friends from their church. 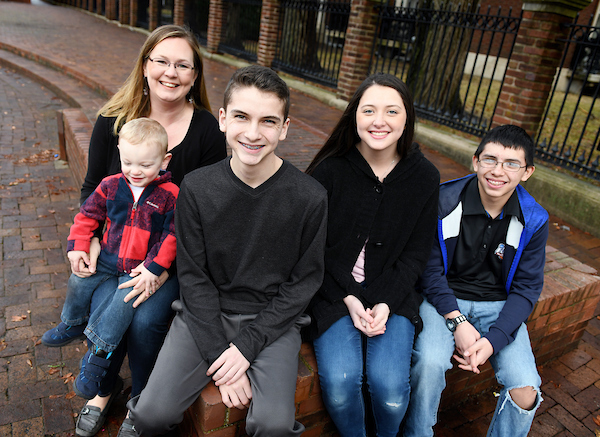 One of those friends came rushing in with 2-year-old Graham, the youngest of Mindy’s children, in his arms.

Mindy’s first thought was that Alex must be really scraped up, maybe even had suffered his first broken bone. None of her four children, including 15-year-old Lea, had ever broken a bone.

But back in those woods, kneeling next to Alex, Mindy saw it was something much more devastating.

“That’s when I realized he was not moving,” she says. That’s when she realized it was bad.

The scene was eerie, unthinkable. Alex was conscious and pale and quiet. He wasn’t crying or screaming. He just kept asking the same questions over and over.

The family started praying around Alex and told him help was on its way. 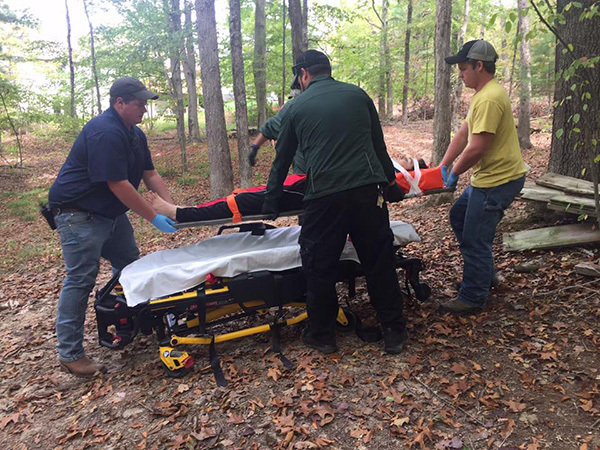 When first responders arrived and realized how little sensation Alex had on his body, they made a crucial decision. Alex needed to get to Riley Hospital for Children at IU Health immediately.

Aaron and Mindy watched as Alex was put onto a gurney and loaded into a LifeLine helicopter. They watched as their son ascended into the sky, neither knowing whether he would ever walk again.

Long before Alex ever got to Riley, the hospital had been alerted. Teams of people were preparing for his arrival, including Jeffrey Raskin, M.D., a pediatric neurosurgeon.

Alex had burst his C6 vertebrae. Shattered it.

“The vertebral body was squashed down and burst out,” Dr. Raskin says. “It burst out forward into the esophagus but didn’t cause esophageal injury and it burst out backward into the spinal cord.”

And there, it did cause injury. Devastating injury.

Alex was lucky, in one way. His was an incomplete spinal cord injury, meaning he still had a chance of repair, a chance of walking again.

But no one knew for sure. 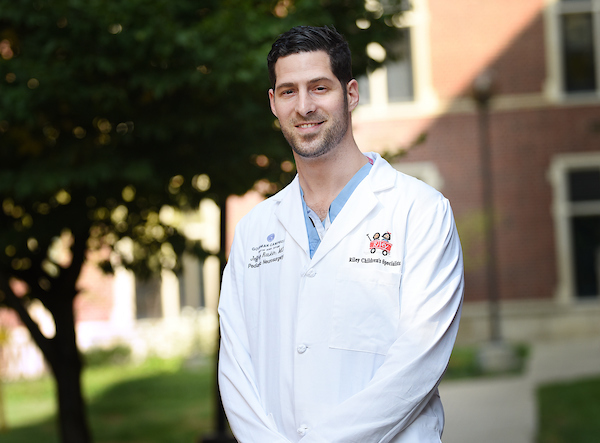 “His parents were devastated as these families always are,” Dr. Raskin says. “One minute they had a totally normal child, who goes from normal to facing a life-threatening injury.”

Or, perhaps, worse -- an injury that would mean Alex’ life as he knew it was over.

The pain was excruciating as Alex lay in a trauma bay at Riley. The pain was so bad in his neck, he couldn’t even feel the needles poking him. He couldn’t open his eyes.

“I was in so much pain. That’s just how I kind of would deal with it,” Alex says. “I just closed my eyes and tried to get over it and not cry.”

Aaron and Mindy rushed in to a room scattered with leaves and dirt and sticks – a leftover reminder of those fateful woods.

The room was also filled with medical staff tending to Alex, doing all they could. Checks and tests and scans. There were scary moments in that room, when Alex vomited and his heart rate dropped and doctors weren’t sure he would make it.

And then, Alex was stabilized, and it was time for surgery.

“We knew he was paralyzed,” Mindy says. “And before surgery, they told us that some people will regain movement and some people won’t.”

The surgery lasted more than four hours -- until 12:30 a.m. Monday. It was a fusion, a fairly common and ordinary surgery, says Dr. Raskin. But its intent was extraordinary, to help Alex walk again. 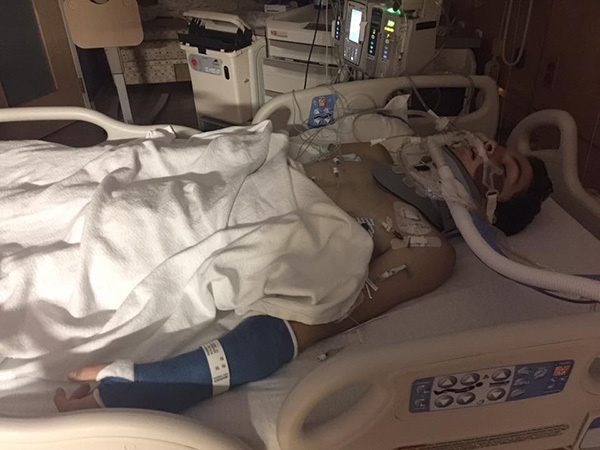 The corpectomy and fusion was done with an incision through the front of Alex’ neck. Dr. Raskin moved his trachea and esophagus to the side.

He pulled out bone fragments and discs. He put in a tibia allograft, a piece of tibia from a cadaver, to replace the bone. Dr. Raskin then screwed in a metal plate.

And now came the wait.

Over time, the tiny movements got bigger. Each day, Alex got more and more back. After 10 days in the ICU, he was moved to Riley’s rehab unit.

In Columbus, Mindy and Aaron met with a company to find out what they needed to do to their home to accommodate Alex. They went over where the ramps should go, what room would be best for Alex to live in with his wheelchair, any obstacles inside the house.

Mindy came back to the hospital that day and told Alex about it.

And for weeks, Alex worked in rehab. Taking steps. Using a cane. Shimmying down parallel bars. Frustration and grit and determination propelling him forward.

And then, just like he said he would, Alex walked. He walked right out of Riley and went home.

It’s been two months since that day. Alex has just finished an orthodontist appointment after a day of school – the stuff teenage boys’ lives are supposed to be made of.

He is sitting in the Lucabe Coffee Co. shop in Downtown Columbus.

It’s Monday and, on Tuesday, he will complete his final day of rehab. Alex went back to school after Thanksgiving break. The only lasting effects of his injury are a weak left hand and left leg.

When asked what advice he has for teens, there is the obvious. Tree parachuting is a bad idea.

And then, the words that come from his heart, born from the days he battled in rehab trying to put one foot in front of the other.

“Don’t give up and don’t get discouraged,” Alex says. “Just because something might not happen right away doesn’t mean it’s not going to happen. And if you never try something because you think it’s never going to happen, it won’t happen. But if you keep trying, it probably will happen.”