Cancer hit first, then severe complications almost killed him, but Logan Adams never stopped fighting. Now, he is learning to walk again with help from a Riley physical therapist.

It’s not exactly pain that Logan Adams is feeling, but he doesn’t like the tingling sensation that stretches from his ankles to his toes. The nerves in his feet are on high alert after months of immobility. 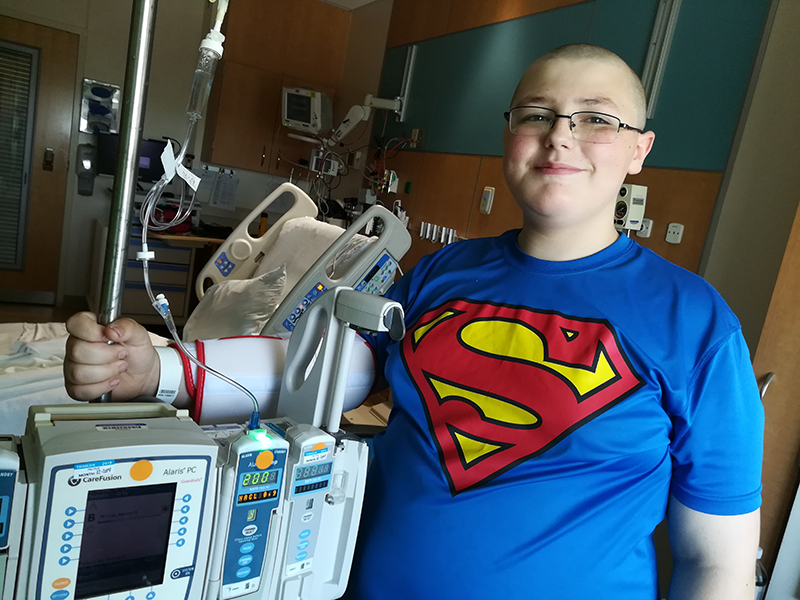 As rehab tech Valencia Gammage tries to clean the 15-year-old’s feet, he grasps the hands of his mom, Kay, and physical therapist Sarah Johnson and winces, taking deep breaths, willing the appointment at Riley Hospital for Children’s rehab unit to be over.

Gammage is preparing Logan’s crooked feet for another round of casting in an attempt to correct the contracture he suffered after months in the hospital. The condition can cause shortening and hardening of muscles, tendons or other tissue, often leading to deformity and rigidity of joints.

Casting is an alternative to surgery, one the boy and his mom are willing to accept after a long, hard road of cancer and devastating complications.

Logan was diagnosed with Burkitt lymphoma, a form of non-Hodgkin’s lymphoma in which cancer starts in immune cells called B-cells. A fast-moving cancer, it can be fatal if left untreated. Symptoms can include abdominal swelling, distortion of facial bones, night sweats, intestinal obstruction, an enlarged thyroid and enlarged tonsils.

That diagnosis last April was just the beginning of Logan’s troubles. In the midst of treatment, his colon perforated and he became septic. He was intubated and sedated for weeks in intensive care, and when he woke up, he could not walk.

For six months, Logan was unable to put weight on his feet, relying on a wheelchair to get around. Last month, Johnson agreed to try casting Logan’s feet to slowly reverse the curve, replacing the casts weekly as his ankles adjust to a more normal position. 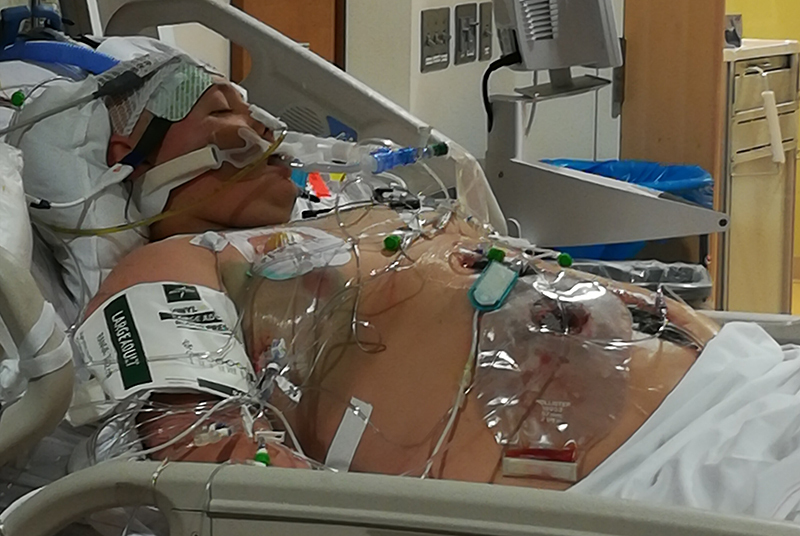 “He hadn’t walked since he came into the hospital. After his first round of casts, he was able to walk for the first time since June,” Johnson said. “He’s just a really neat kid who has been through a lot of stuff, and to have any motivation after going through something like that is pretty remarkable.”

Johnson says Logan’s mother has helped him remain strong – mom and son are focused on the goal of him walking again.

On his third visit to Riley’s outpatient rehab clinic, Logan was able to stand with help and take several steps down the hall. His anxiety about falling will ease in time, Johnson said.

“In the cast, I can position his foot, which makes it more stable, and I can build it up, putting different heel lifts in the cast to make it so the cast is flat, even if his feet are not. Once I give him a stable place to be able to stand, he can start working on balance and leg strength.”

It may take a few more weeks before Logan’s feet are corrected, but he is well on his way, Johnson said, noting that he has gained over 25 degrees of flexibility in the right ankle and 15 degrees in the left, bringing him closer to the 90-degree position he needs to be able to stand and walk on his own.

“He has some complications from the chemo with his nerves and muscles, but at least this gives him a chance,” she said.

Kay Adams is thrilled with his progress, as she watches him go from sitting to standing to walking in the small exam room. Also returning is his sharp wit, which he relies on to keep the mood in the room light. 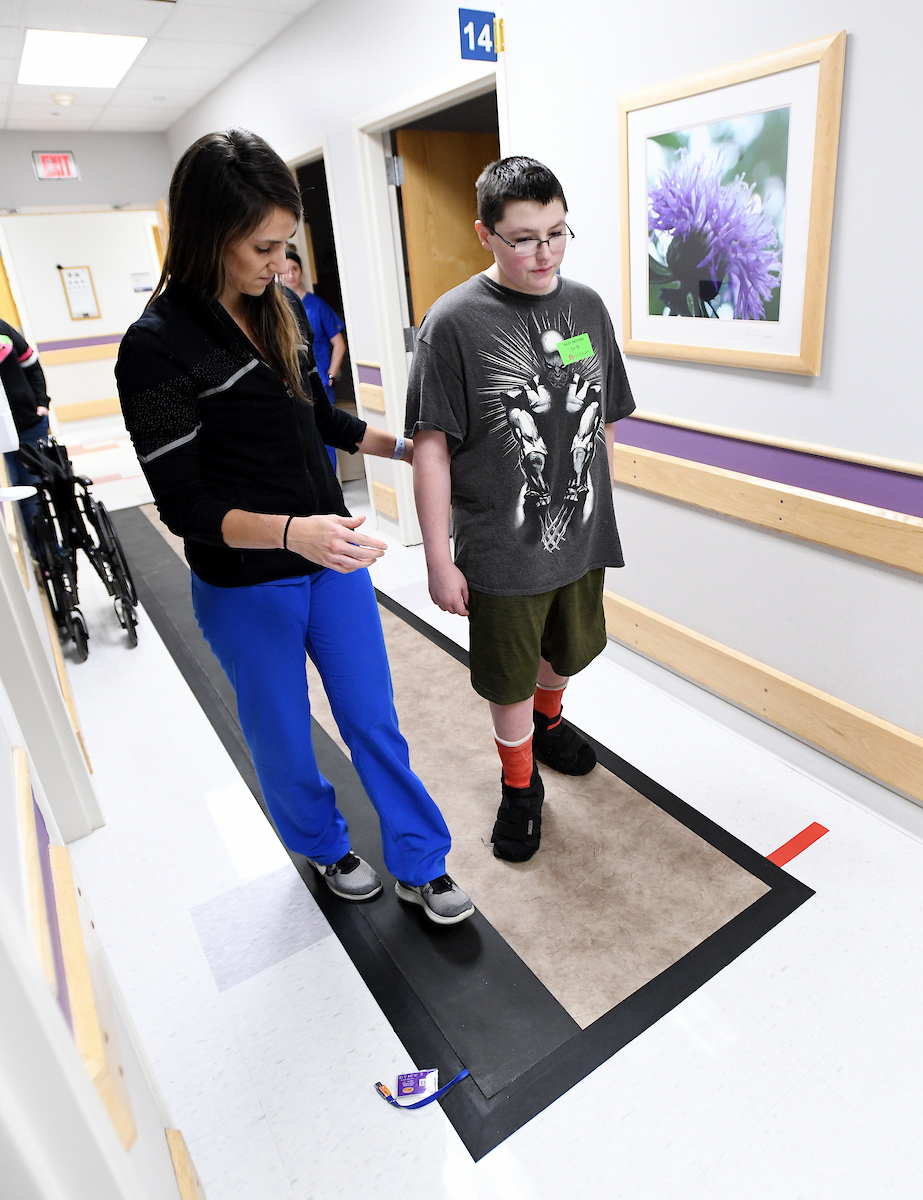 For now, Logan, who has two younger brothers, still uses a wheelchair to get to classes at Jefferson High School in Lafayette, where he is a freshman. But he is getting in his steps at home, he said.

The teen, who loves fishing and wants to study marine biology in college, lost 70 pounds in the hospital. After three weeks on a ventilator, baby food was about all he could eat before he could go home. Banana was his go-to baby food.

His appetite and his diet have improved since those early days.

Now that his cancer is in remission and he is regaining the use of his legs, Logan is ready to put the last year behind him. So is his mom, who is thankful to the rehab team for helping her son walk again and to his oncology team, in particular Dr. Michael Ferguson and Dr. Tyler Severance.

“We loved his oncologists,” she said. “They were awesome and answered all our questions and were there when we really needed them.”

Johnson expects to see Logan a few more times but is impressed with his progress.

“Typically, patients only gain a few degrees each round of casting, but he has been working hard standing and walking at home, which has helped tremendously.”