Sweet reunion: Riley patient meets medics who helped save him

IEMS workers reunite with 15-year-old Dylan Matkins, nearly eight months after they responded to a 911 call and found him lying on the floor at his home, a gunshot wound to his back.

Dylan Matkins had so many questions. How did the paramedics get the IV in? How did they get him out of the basement? How long did it take for the ambulance to reach the hospital?

Lucky for him, Katie Bailey and Tyler Hostetler with Indianapolis Emergency Medical Services had time for him and all of his questions.

Bailey and Hostetler reunited with 15-year-old Dylan at Versiti Blood Center of Indiana last weekend, nearly eight months after they responded to a 911 call and found him lying on the floor at his home, a gunshot wound to his back. 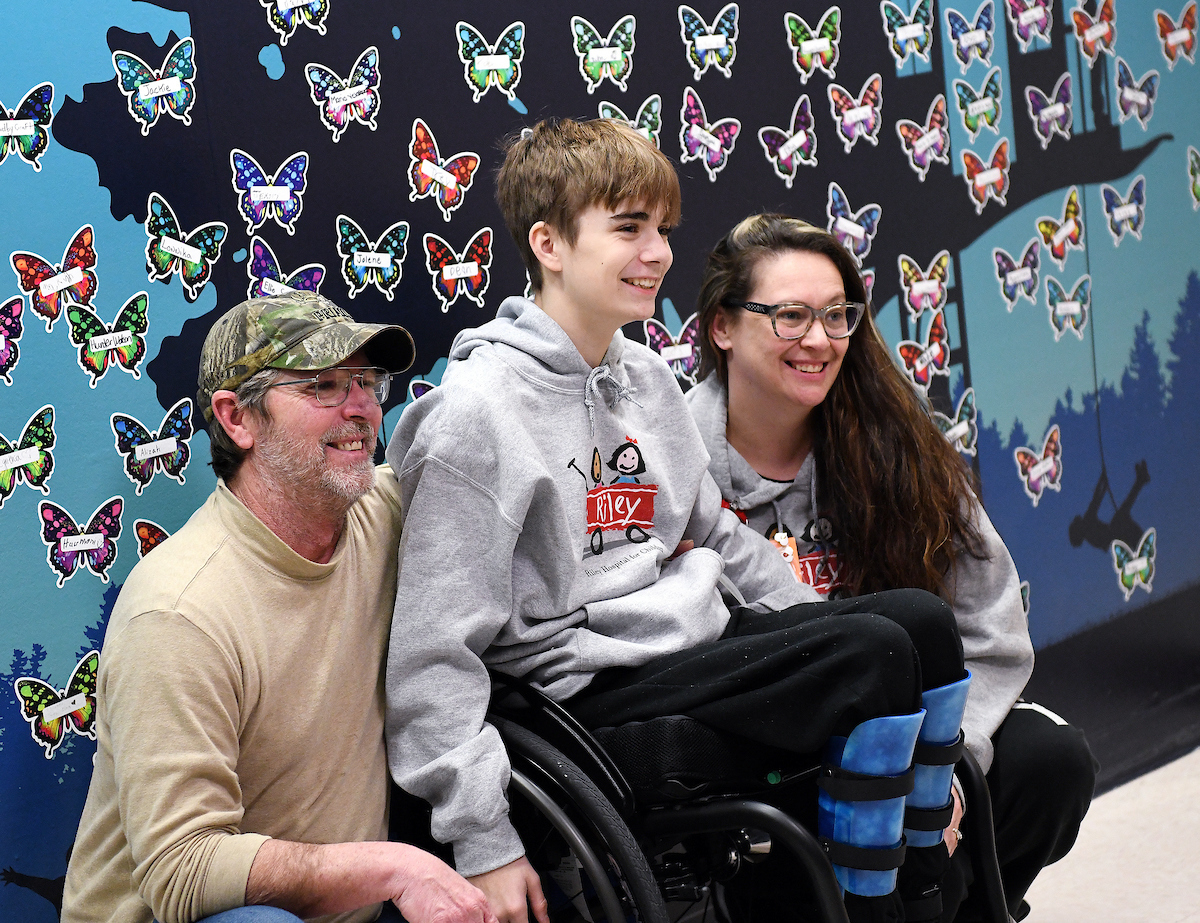 The reunion was arranged by Dylan’s mom, Misty Welch, who works at Versiti, and Brian Van Bokkelen, media relations and public affairs manager for IMES.

It capped off a daylong blood drive in honor of Dylan and his baby brother, Dalton, who passed away three years ago.

Dylan was injured in the accidental shooting Jan. 2 in the basement of his Southside Indianapolis home. The bullet that entered his back caused severe damage to his spinal cord, and he spent six weeks recovering at Riley Hospital for Children.

His outpatient rehab continues with twice-weekly therapy sessions at the IU Health Neuroscience Center. In March, he began walking with the support of a robotic treadmill in the neuro-rehab unit at the center.

And now, several months later, he wears braces on his legs, but he is bearing weight on his own and can move on the treadmill without robotic assistance on his legs, his mom said.

He doesn’t remember a lot about that morning, but he is ready to fill in some of the gaps in his mind, now that a little time has passed.

Bailey, who has been with IEMS for six years, was thrilled to see the teen doing so well when she saw him last weekend. 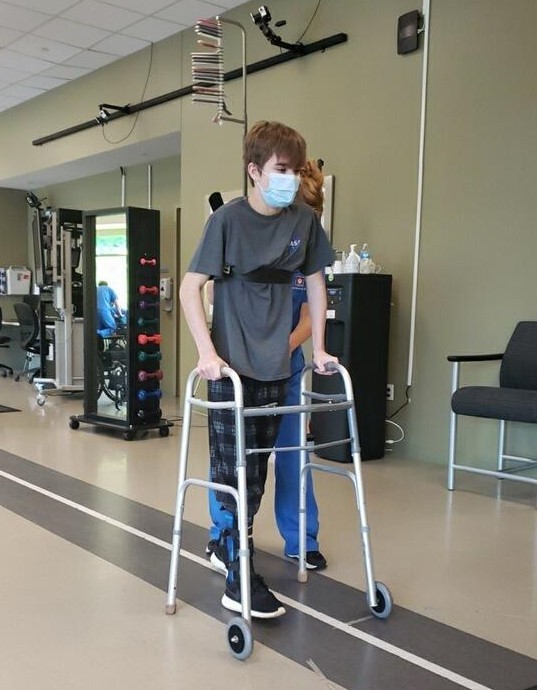 “It was awesome to see him. He seems very determined to walk on his own,” she said. “He has a goal in mind and you can tell that he is really working toward that goal.”

Bailey, who has a daughter Dylan’s age, said she and her partner knew they were being sent on a gunshot run, but they didn’t realize the victim was a child.

“I walked in and said, ‘We’ve got a kid here.’ I think that was probably one of the biggest shocks.”

Dylan asked Bailey if it was hard for her to treat him when she has kids of her own at home.

“I told him that in those situations, I don’t think about that. ‘I think about helping you, getting you to the hospital.’ ”

When they arrived on the scene, Dylan’s mom had been giving her son CPR, but he had a pulse and was breathing on his own, despite having lost a lot of blood.

Their mission was to keep him stable for the 15-minute trip to Riley.

“It feels like an eternity when you’re in the back of the ambulance on the way to the hospital,” Hostetler said. During that time, as Bailey struggled to get an IV started, Hostetler and a firefighter tried to keep the teen alert, asking him questions.

“He was going in and out of it,” Hostetler said. “There were some tough decisions that had to be made on that run. He was bleeding out. She (Katie) had to make decisions on IV access points, fluids.”

When the medics told Dylan that they had talked about video games with him in the ambulance, he didn’t remember any of it.

What Bailey and Hostetler remember upon arriving at Riley is that emergency department physician Dr. Gregory Faris greeted them at the door, ready to spring into action.

“He took report from Katie real quick so he knew what to do on his end, but the moment we went into the room it moved so flawlessly,” Hostetler said. “The surgeon that was taking the lead on it made sure the room was quiet so Katie could give the report to them even though a majority of them had heard it on the radio. She made sure that Katie was heard and that this kid was going to get the best care possible.” 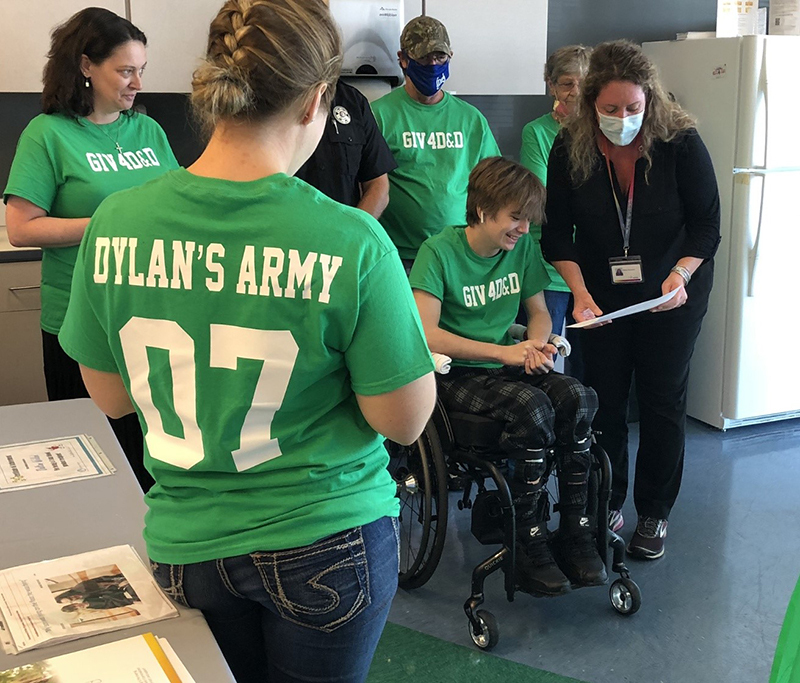 As Welch and other family members and Blood Center employees witnessed last weekend’s reunion between Dylan and the EMS team, they couldn’t help but get a little emotional.

But not Dylan, his mom said.

“He was so engaged in what they had to say. He asked so many questions, and the information didn’t seem to bother him,” Welch said. “So much happened that he didn’t remember.”

The blood drive collected nearly 100 units of blood products that day, representing the number that Dylan used during his surgeries at Riley.

“That was our goal, to put back on the shelf what he used,” said Welch, who is passionate about blood donation.

She is hoping that her son will be walking with crutches by his 16th birthday in January.

“God had his hand on this the whole time,” she said. “We are all so grateful for the prayers from everyone, and we hope you all continue to join us throughout the rest of his recovery.”