Superhero costumes could help children at Riley push through pain

What if a child could push a button on a dress or shirt and activate a superpower? And what if that superpower could help the child through a painful hospital procedure or a grueling physical therapy session?

It might sound like something out of a comic book, but the goal is to give kids a dose of encouragement rather than medicine, said Dr. Chuck Dietzen, who is developing the idea with a team of experts who have a passion for Riley Hospital for Children. 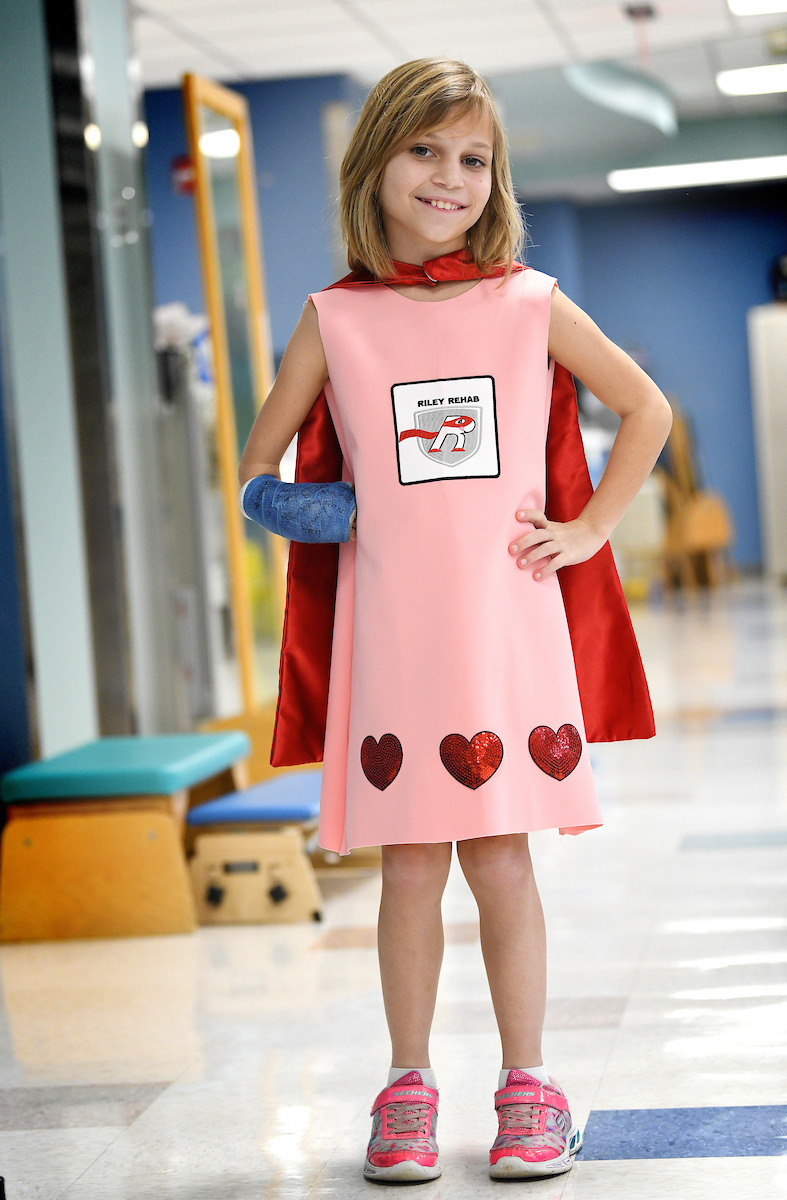 One of those experts is Hayden Cloud, who was rocking her superhero outfit at Riley last week. You might even call her a “super” model.

The 10-year-old was modeling a pink dress and red cape designed by a team of former Riley kids, with an assist from a longtime Disney and Marvel Comics animator.

Hayden, an orthopedics patient at Riley, would like nothing better than to go home wearing the costume – the better to annoy her little brother – but it’s just a prototype, so it doesn’t have any superpowers yet.

Replacing pain meds with a super psychological boost of sorts puts the power back where it belongs – with kids, said Dietzen, medical director of rehab medicine at Riley and founder of nonprofit Timmy Global Health.

“When you come into a hospital, it’s scary. So much of what we try to do here is, how do we empower a child, how do we give them some control over what’s happening?” 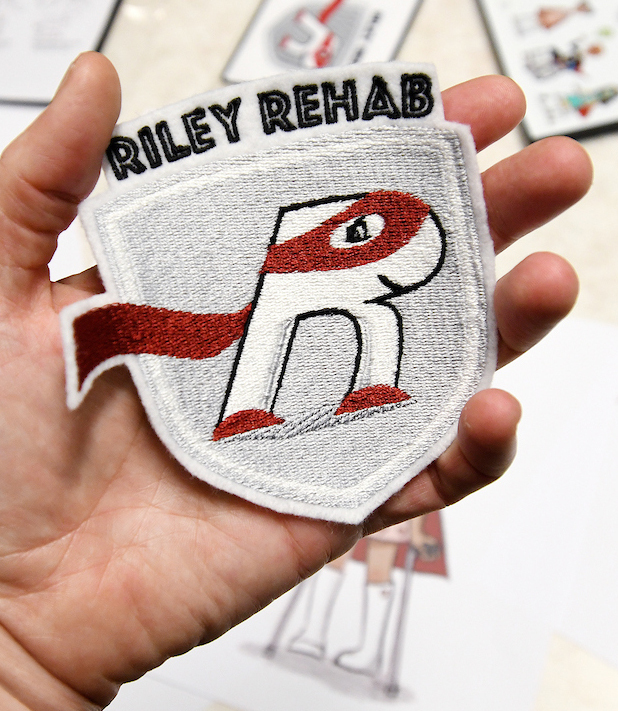 Instead of wearing the usual hospital garb or sweats during a rehab session, a child could wear a superhero outfit with a Riley light-up patch on the front.

“When they need more endurance or strength or maybe things are starting to hurt a little bit, they push on that patch and the Riley rehab emblem lights up and makes a sound – and now they’ve got more energy,” Dietzen said.

He turned to animator Amy Duarte, who worked on “Spiderman” and “Iron Man,” among dozens of other films, to sketch out designs for his dream. Each featured a child with a mobility device, be it a wheelchair, crutches or a scooter.

“I thought, what would be the best illustration for a young patient to feel, ‘Oh, that could be me. It’s OK to be here, it’s a safe place,’ ” she said.

Duarte, who was born deaf, found her superpower in drawing. After 20 years in the movie and TV industry in California, she moved to Indiana to take a job as a motion designer for a healthcare marketing company.

With the Riley project, she said, “I feel I’m doing something wonderful for children. It’s a really fun process.” 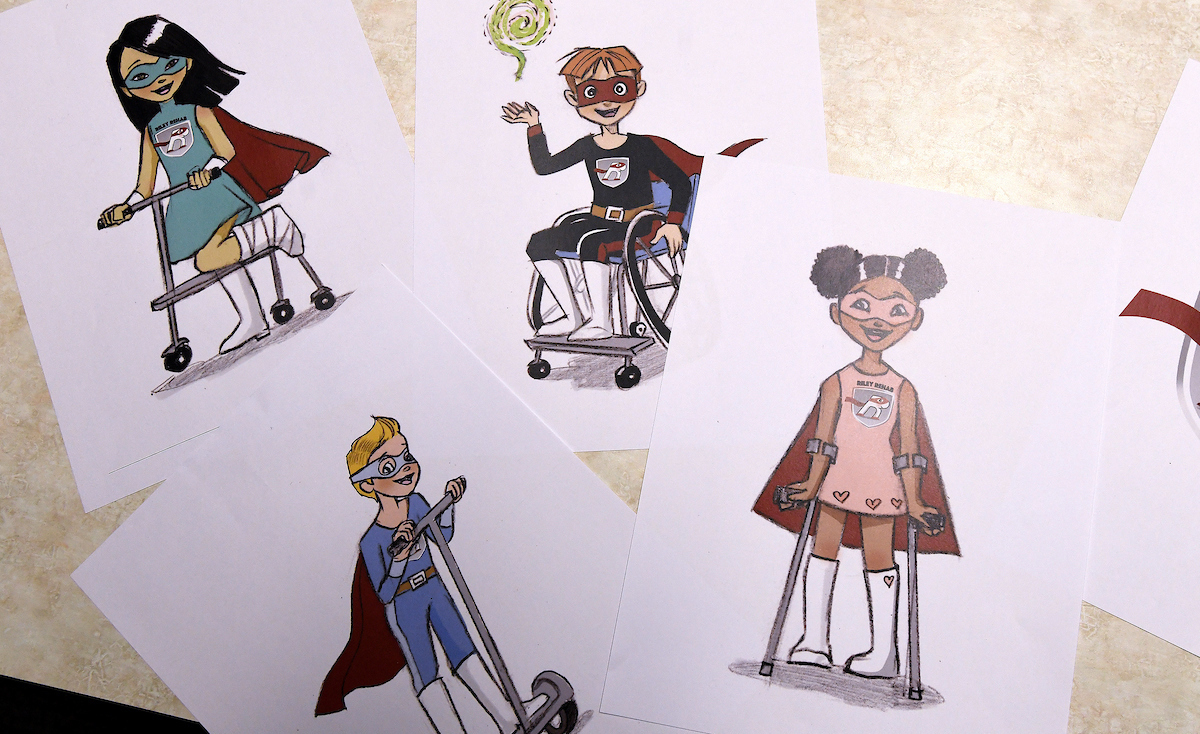 After he had sketches in hand, Dietzen pulled in former patient Kaycee Marshall when he found out she was studying fashion design in college.

Marshall, a senior at Kent State University, is already working on her senior design project for school. The collection will feature evening wear for women in wheelchairs like herself.

For Dietzen’s project, she designed and sewed the outfit that Hayden was wearing. “I started out going for comfort, but I wanted to bring a little sparkle to it so I went with sequin patches.”

The sparkle definitely met with Hayden’s approval. “I really like it, I want to keep it,” she told her mom, Kelli Cloud, practice manager for rehab and palliative care at Riley.

Marshall, who underwent multiple surgeries at Riley as a child, was on hand as Hayden first showed the dress in public at a fashion show Marshall hosted with nursing student Savannah Harrison to benefit Riley earlier this year.

Since then, another fashion designer and former Riley patient has joined the team to help create four additional prototypes for boys and girls. 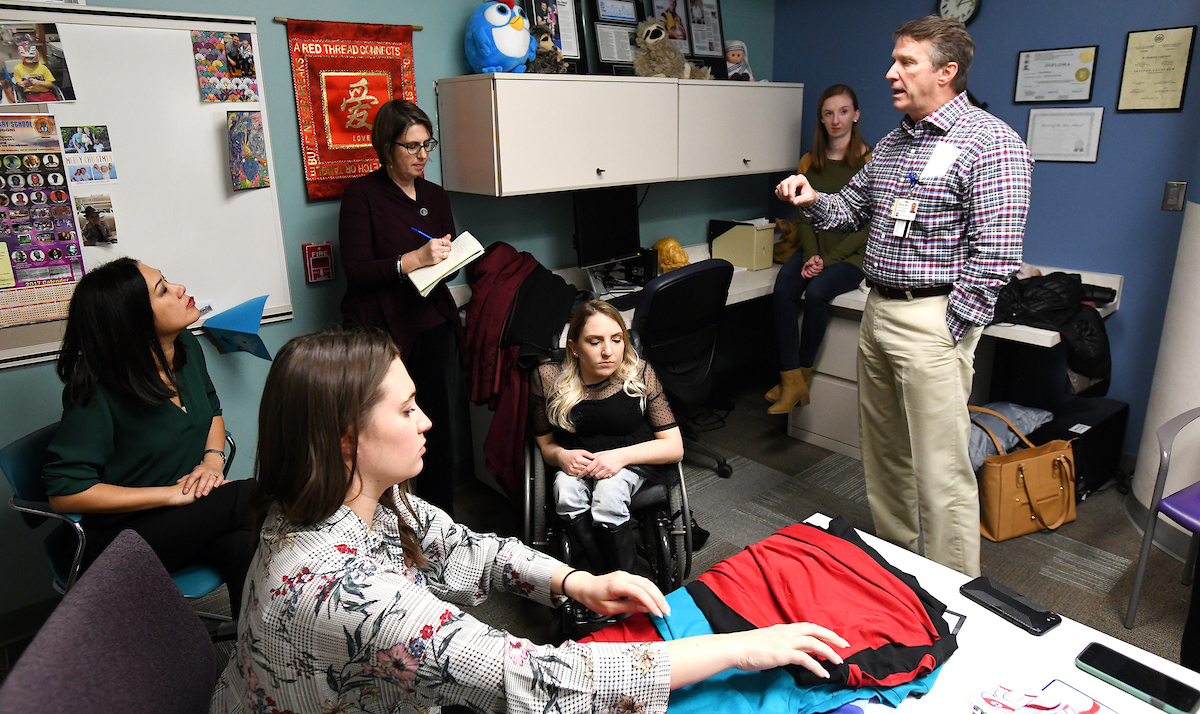 Julie-Anne Bignal, 25, studied fashion design at Indiana University, graduating in 2015. In between developing her own private label and working in a bridal boutique, she has worked on the Riley project.

“This whole process is figuring out which fabrics are best for kids, what’s most comfortable, which designs are the most functional,” she said.

Ideally, the finished product will be something kids not only want to wear but will help them in their rehab and make them feel better about being there, Bignal said.

The trickiest part of the project is figuring out how to incorporate the light-up emblem. For that, Dietzen turned to an old friend who operates a forensics lab in Kokomo for electronics manufacturers.

Terry Munson is leaning toward putting the LED gadget inside an accompanying stuffed animal that would wear a matching superhero outfit, but Dietzen said he hasn’t given up on the patch idea for the shirt. Other possibilities include a watch or locket that could activate a child’s superpower.

Dietzen points back to a favorite 1960s TV superhero, Underdog, as an inspiration. “He popped open his ring and activated his superpower.”

Looking around the room, the physician said he was amazed with what each young woman brought to the design project. “We have the Fantastic Four right here.”

Dietzen said he hopes to have costumes in production by spring.

Even without special outfits though, Riley kids are super every day, he said. “These are the real heroes in life.”