Skylar Littlewood, IU Health Employee and Past Patient: “My Heart Brought Me Back to Riley”

Skylar Littlewood was treated at Riley as a newborn infant, and now has returned to work as an HR Consultant.

Skylar Littlewood’s arrival into the world was a dramatic one. “My mom was two days overdue with me when she began to get a bad feeling, and generally not feel well,” recalls the 24-year-old Lafayette, IN native. “So, she went to get checked out. Nothing extraordinary was noticed so she was sent home. She started bleeding four hours later and was rushed to the hospital.”

Doctor diagnosed Skylar’s mother with placental abruption (a condition in which the placenta partially or completely separates from the uterus before a baby is born). “I was basically drowning inside her,” Skylar says.

Shocked, Skylar’s mom underwent an emergency Cesarean. “Prior to the pregnancy she had never had any health issues, no complications at all,” recalls Skylar.

The baby came out safely but soon started bleeding from her nose and mouth. Staffers at the local Lafayette hospital worked on the precarious infant for 14 hours, hoping to see some improvement. When there wasn’t, Skylar was rushed to Riley Hospital for Children at IU Health. “I went into cardiac arrest and had a heart attack in the ambulance on the way there,” Skylar says. “It was bad.”

Upon arrival, staffers told Skylar’s parents that she likely had a 20 percent chance of survival. “If I did survive they said I would probably be severely disabled,” she says. “And I was my parent’s first child--they were devastated.”

The Riley team immediately began to prep Skylar for ECMO. “Otherwise known as extracorporeal membrane oxygenation, ECMO is a tool used in life-threatening situations,” explains Dr. William Engle, neonatologist at Riley. “An ECMO machine allows blood to drain from a baby’s heart into an artificial lung and then through this artificial lung the oxygen is taken up and carbon dioxide is removed. This well oxygenated blood is then pumped back into the baby by way of the heart or blood vessels around the heart.” Essentially, he says, it’s a way to treat babies whose lungs or hearts are not working well. 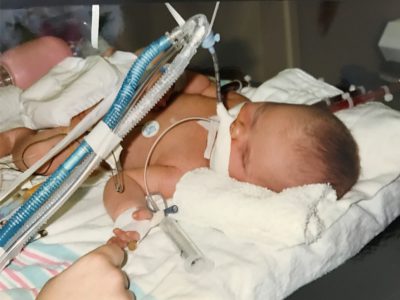 Still, ECMO is often a last option due to the complications that can occur, says Dr. Engle. ECMO patients require surgery to get connected to the equipment and have to take blood thinners—circumstances that can be risky for some. Still, the Riley program is a successful one that has stood the test of time. “We first used ECMO at Riley on May 31st in 1987,” says Dr. Engle. “Our program is coming up on a 30 year anniversary and we have been designated a Center of Excellence.”

This high caliber care saved Skylar, who stayed at Riley for a few more weeks after having ECMO before heading home. “I still required regular checkups,” says Skylar. “We lived in Lafayette then but my parents would drive me to Indianapolis to go to Riley until I was a year old.”

Skylar was lucky. Most say she recovered in a way that was almost miraculous. “I never had any lasting issues. I went on to go to school and hit all of my milestones. I attended and graduated from Purdue. Everything was fine.”

Why was she spared? “No one knows,” she says.

But, one day Skylar felt called back: “I heard that IU Health was hiring and I wanted to work at this amazing place. In a way, it’s like my heart brought me back,” she says. 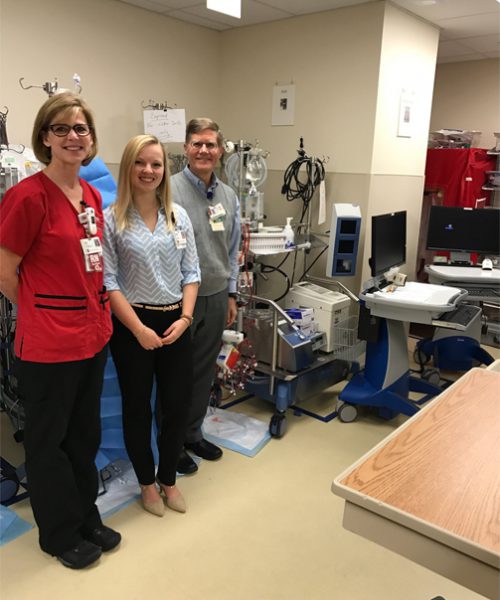 Skylar was hired in February to be a Human Resources Consultant.

Shortly after, she went to see Dr. Engle. “I sent him an email thanking him for my life, asking if we could meet.” He happily obliged. “He invited me to tour the NICU and see the ECMO machines,” she says.

The best part: Skylar met a mom who had a two-year-old daughter on an ECMO machine. “I was able to tell her that I was once on the machine and while it was hard then, things turned out okay for me,” she says.

“It was extremely emotional. But, afterwards I felt like I had given her a little help and maybe hope. It was life-changing.” By