She’s lost her leg, but her spirit remains strong

4-year-old spends another birthday in the hospital, so her parents bring the party to her.

Korah Dearing is crying as a nurse adjusts the tubes and wires attached to her little body. It’s not a loud cry, more of a whimper, but her 4-year-old face twists up in unhappiness until she sees her mom walk in. 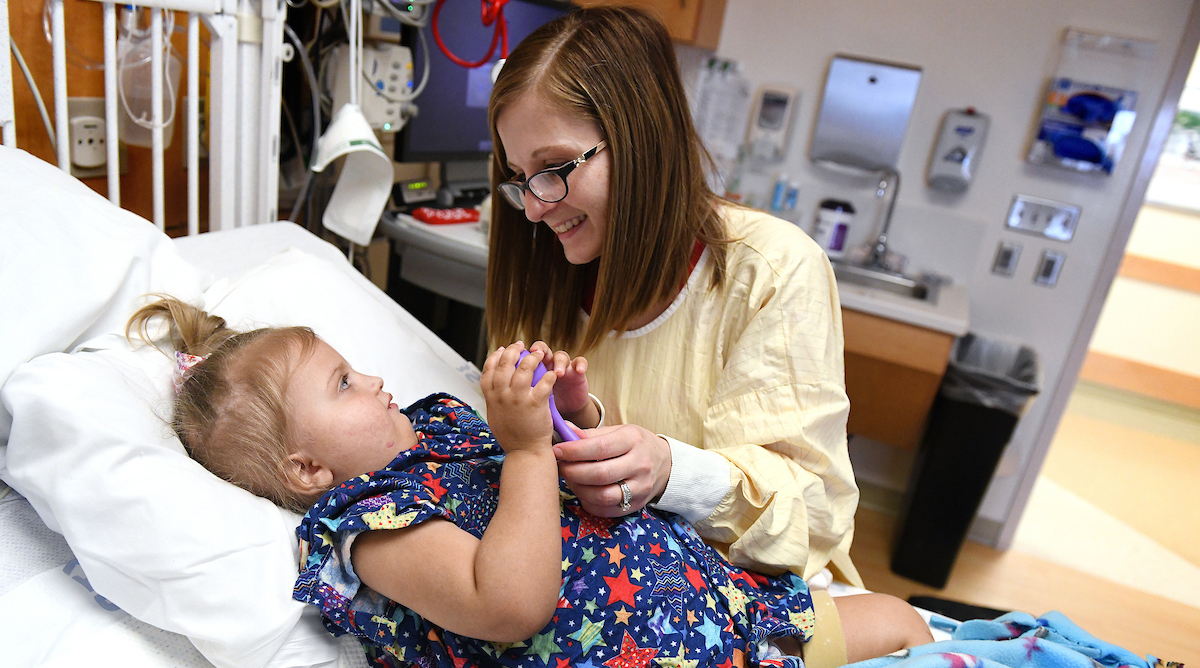 Melissa Dearing has just driven 90 minutes from her home near Van Buren, Indiana, to Riley Hospital for Children to see her little girl. She’s been making the trek every other day, trading off with her husband, Travis, since Korah was admitted to Riley back in November.

It’s an ordeal for everyone, including the couple’s five other children at home.

“My other kids, it’s hard on them,” Dearing said. “I was spending a lot of time here before, but this last time I had to spend more time at home because they took it really hard, not being together as a family. Korah is a big part of all of our lives.”

This is Korah’s latest of several hospitalizations, but it likely won’t be her last. She has spent three of her four birthdays hospitalized. Last month, her mom and dad brought cupcakes and balloons to celebrate her fourth birthday, while they FaceTimed with her siblings, who were home with cupcakes of their own. Korah’s birthday balloons still sit in the corner of her hospital room. 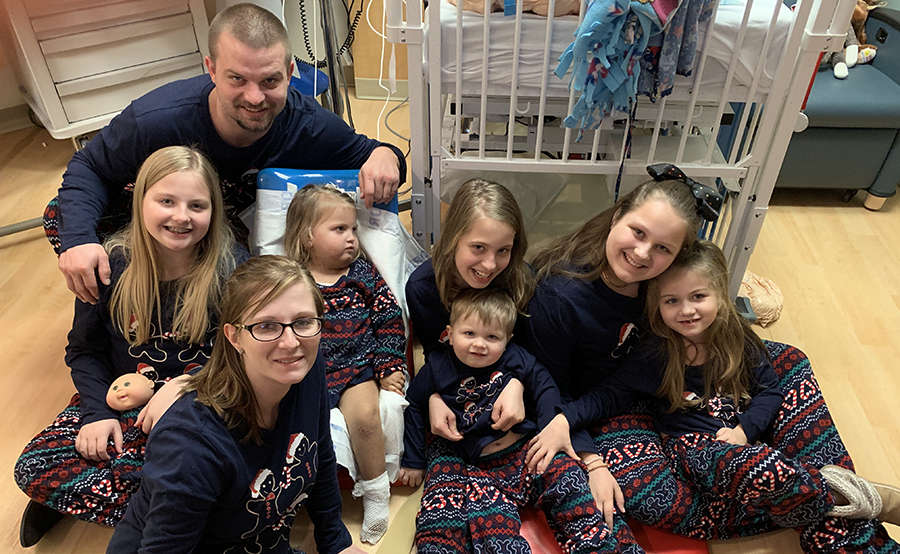 The blond-haired, blue-eyed girl has faced a host of health challenges, starting when she was diagnosed with epilepsy before she was 2. But that was just the beginning. A bout with the flu in 2017 left her immune system weakened, and she suffered septic shock.

Even though she had been eating on her own up to that point, a feeding tube was placed in her to ensure she was getting enough nutrition during the height of her medical challenges. She has a liver condition that causes varices (enlarged veins) to form in her liver and esophagus, which can be life-threatening if they break open and bleed.

She also has mitochondrial disorder, a chronic disease that occurs when the mitochondria of the cell fail to produce enough energy for cell or organ function. Symptoms include poor growth, developmental delays and muscle weakness. And she suffers from adrenal insufficiency, which requires her to take daily steroids.

Perhaps the most difficult thing she and her parents have had to endure so far is the amputation of Korah’s right leg below the knee in December due to an infection.

It was hard to let go of part of their daughter, Melissa said. “We didn’t know what life would be like for her after that.”

She’s become used to steeling herself for these kinds of setbacks. A labor and delivery nurse in Marion, she knows more than the average parent about her daughter’s medical challenges.

“I kind of know what to anticipate, but it’s hard to let go as a parent,” she said. “I didn’t want her to have a G-tube because she ate fine before she got sick the first time. And I didn’t want her to lose her leg, but obviously I wanted her to be alive. So we have to make decisions like that. You kind of have to let go of stuff.”

Korah is a tough cookie. She was on a ventilator for several weeks but is now breathing on her own. As cartoons play on the television in her room, she quietly claps to the music and a sweet smile slips out. She loves music, her mom says. “The Wheels on the Bus” is a favorite.

Music therapist Jenny Kaufman saw that firsthand. Kaufman worked with Korah during much of her time at Riley, bringing her guitar in to play and sing familiar songs like “The Wheels on the Bus” and “If You’re Happy and You Know It.”

“Oftentimes it broke my heart how upset she’d be when I’d come into the room,” Kaufman said. “She’d be crying and squirming in bed, obviously in distress and uncomfortable.”

But within minutes, the mood changed. The familiar songs calmed and comforted her, allowing her body to put its energy toward healing versus being sick, Kaufman said. Not only did it make Korah feel better, it helped other staff members who were able to see the change in her. 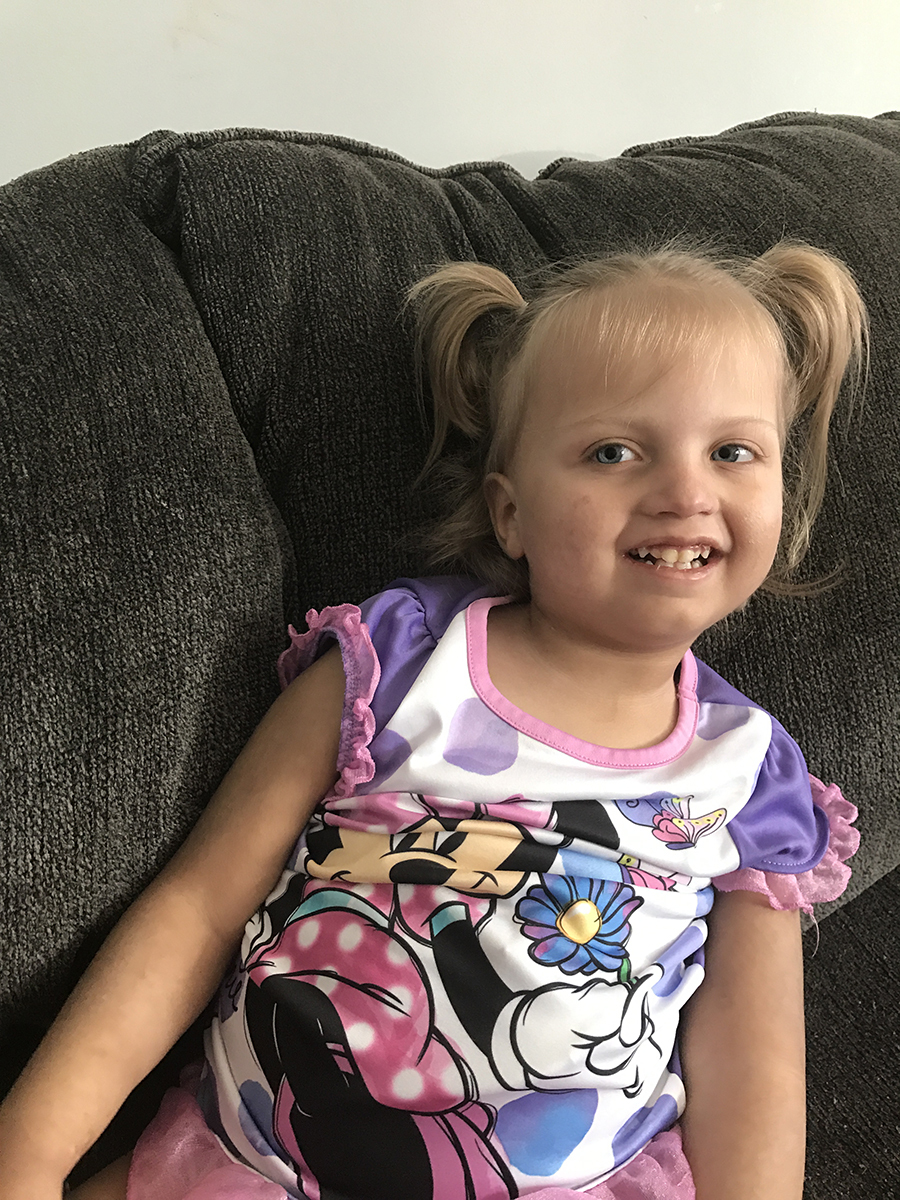 “It was like a light in the room when she was able to calm down and sing along,” Kaufman said. “She would go from being upset to smiling and clapping her hands.”

Korah was born in Marion in January 2015. Melissa’s pregnancy had been normal until about the 36th week, when an ultrasound revealed her baby’s growth had slowed.

She was induced at week 38 and delivered 4-pound 10-ounce Korah without incident. Mother and baby even went home three days later. But it soon became obvious that Korah wasn’t hitting all of her milestones. Korah is developmentally delayed, her mom said. Even before the amputation she wasn’t walking, though she was sitting up and learning to crawl. Her vocabulary is limited to hi, mama and dada, but she coos and giggles and is a good communicator, Melissa said.

“Korah is usually a very happy little girl. She loves people, she loves to play, loves to be outside and go for car rides.”

Fry said her young patient was much sicker the previous week. “She’s a strong one. Earlier today, she was smiling and cooing. She gives us all the faces,” the nurse said as Korah twisted her mouth into another smile. “I love her attitude face.”

With four older sisters and a younger brother, Korah perhaps is used to showing a little attitude. But mostly, her mom says, she likes to snuggle, to play games and to FaceTime with her siblings while she’s in the hospital.

“It lights up her day to see them.”

The good news is that Korah finally got to go home last week. There was a lot waiting for her – a mountain of Christmas presents under the tree, a new big-girl bed and one more birthday party with the whole family.

Melissa doesn’t know what the future holds for her youngest daughter, but the most important thing right now is that she’s home.