She Was Captain Of The Infant ICU

For 30 years, Janet Delk watched hundreds of children fight for their lives. Now, in home hospice, she is fighting for hers.

She’s lying back in a recliner, painting her nails. They are long, perfectly manicured nails and the polish she has chosen this day is clear.

The colon cancer that attacked her body nine years ago came back with a vengeance in 2014 and then it spread to her liver. 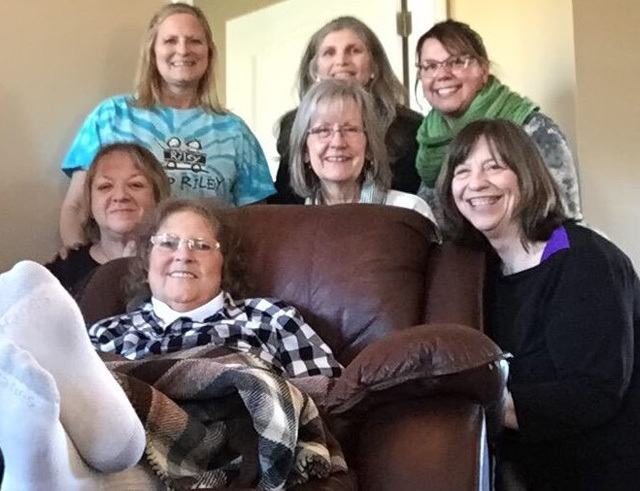 The chemotherapy has stopped. Delk is in home hospice. The last few days, she’s been sorting through those photographs, smiling through tears at all the memories.

She has been watching the Food Network, even thought she can’t keep one bite of solid food down. She has been visiting with people who come by like clockwork to check on their dear friend.

She has been planning a day with a positive matter-of-factness that no one wants to hear her plan.

“Where is that photo, the one for the funeral?” she asks her daughter, Kelly.

Delk, 69, who has always been a positive force of goodness, is smiling. Such a sweet, pretty smile. And she is talking, a lot.

She has stories to tell about a magical place at Riley Hospital for Children, a place she adored, a place she poured her heart and soul into -- the infant intensive care unit.

An infant ICU was unheard of in 1986. But Riley was ready to open one, to be the first in the nation to have one, and it was looking for a secretary to run the new unit.

Delk came in to interview and was hired on the spot. There were no beds or patients or nurses yet. But, Delk was given a key to the unit and went to work.

Things quickly came together and, in 1987, the six-bed unit was up and running. Delk sat in the hub, with an eye into every single room. 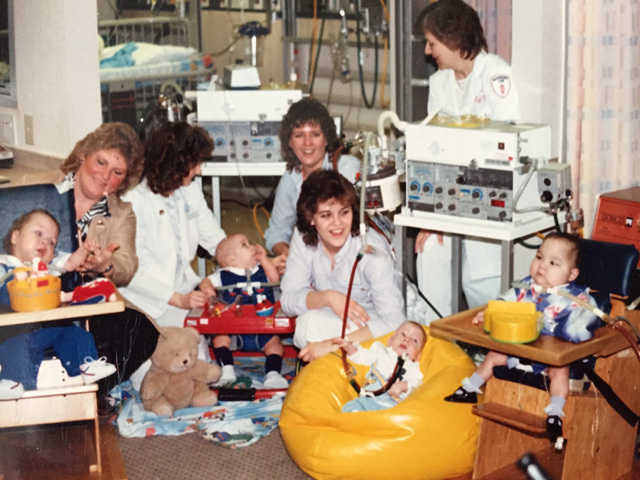 She loved those babies, those chubby little infants. There are so many pictures of her beaming as she holds a patient. Delk grew close to the babies and to their families.

And as often happens in any job, it was the little things that Delk did that stood out. The things that weren’t listed anywhere in her job description of answering phones and filing and organizing.

There was the camera Delk used. Nurses loved to dress up their patients for holidays. A little Santa hat for Christmas or bunny ears for Easter. Sometimes, though, the parents couldn’t be there to see that.

Delk would come into each room with a camera and shoot pictures, print them out and leave them for the parents when they returned.

“She had a big heart, very kind, always happy, always upbeat, always helpful, a servant’s soul,” Lisa Sorgius, an administrative assistant at Riley, said from the hospital this week. “She loved being here. She loved being around the people and the patients.”

Delk was the perfect combination of kindness mixed with a no-nonsense attitude.

“If she wasn’t there, we were like a ship without a captain,” said Kathy Shields, a pediatric nurse who started working with Delk in 1987. “She kept us all going. She just did everything and when she wasn’t there, everybody felt her absence.”

There was the book, a legendary book now. It’s worn and faded. Shields keeps it in her locker, but has it in her hands as she talks about Delk.

It’s a book Delk started on Jan. 19, 1987, the day her unit took in its first patient.  She titled the book the “Infant ICU Census, Maintained by Janet Delk.”

This was a time before computers and electronic records and Delk wanted a way to keep track of those patients. So, she did it herself.

In that book is the name of every single infant who ever came to her unit, with arrival dates and discharge dates. It has updates to conditions, updates when they moved to another unit, updates when they passed away, even if it was years after they left the infant ICU.

It was such a detailed and tedious task for Delk, but one doctors and nurses still reference today, Shields said.

And doctors, at the time, most certainly appreciated what they saw in Delk. Veda Ackerman, M.D., a pediatric pulmonologist at Riley was even known to talk about Delk when she presented at physician conferences. That was quite a feat for a secretary. 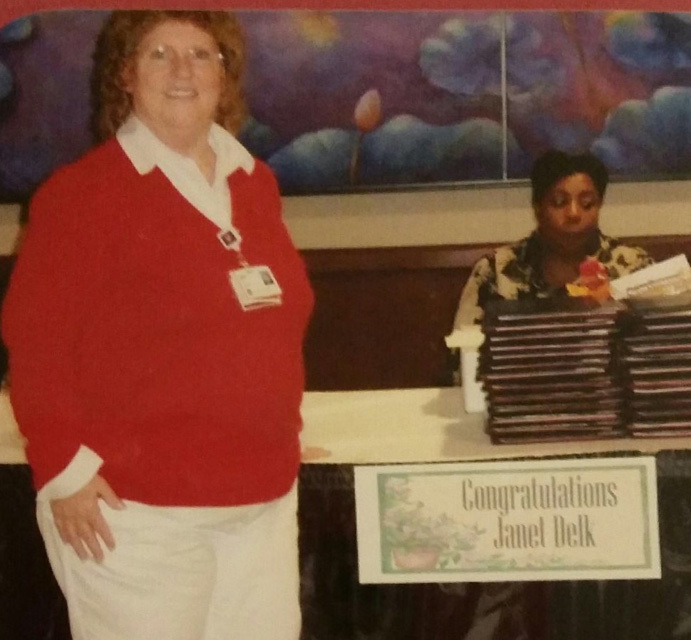 Just a few years ago, Delk got the ultimate honor: Unit secretary of the year at Riley.

She still smiles when she talks about that. Because really, it never seemed as much like a job to her as it did a calling. A calling to help.

There was the little boy not doing well in the infant ICU.  Leann Rohr, a pediatric nurse, was taking care of that boy. Delk was doing anything and everything that a unit secretary could do to help Rohr.

“Afterward, after we got him taken care of and he was better, I went out to thank her for all of her help,” Rohr said. “Janet said, ‘I can’t save lives. That’s not my job. I don’t know how to do that. But, I can make sure I do my job well so I can help you as much as I can.’”

Delk had a passion for Riley and the infant ICU that shined through.

It never failed, not in nearly 30 years. They always came back looking for Janet Delk. The patients and families wanted to see that woman who had been so kind to them.

There was the family who came back and hand-delivered a wedding invitation to Delk, to the woman who had given her heart to them in infant ICU.

There was the mom who ran into Delk in the Riley outpatient garage with her 19-year-old son.

“Janet Delk?” she said, in happy surprise. Delk had always gone the extra mile to help her as she sat by her son’s bed.

“I would say 99.9 percent of the time when families came back, they would ask for Janet,” said Laura Alter, a clinical manager of 8 East at Riley, who was Delk’s manager for more than 10 years.

Not really a surprise. Delk was there for those families in ways no one else was.

When patients would leave, she would put together a folder filled with typed-up discharge instructions. For their follow-up appointments, she included a map with the spot marked where they needed to be with the date and time of the appointment.

It was something, Delk said, she thought would make life easier for those families.

“She is one of the nicest people you would want to meet,” Rohr said. “We miss her. We miss her here.”

Delk misses Riley, too. She didn’t want to leave. She wasn’t ready to retire. She wanted to come back.

But when the cancer returned, “I said, ‘It’s trying to kick my butt,’” Delk said. “It finally did.” 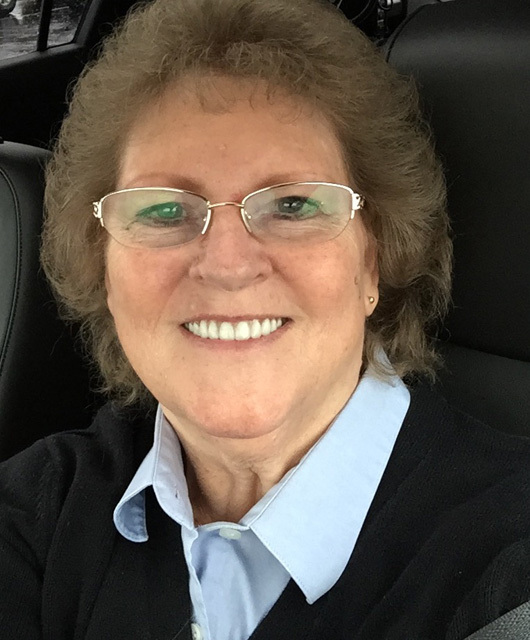 But cancer can’t take away her memories. It can’t make her forget her love of singing; she was a karaoke DJ and sang for years, winning competitions.

It can’t take away her love for her family. In addition to daughter Kelly, who has been there every step of the way caring for her mom, Delk has a son Curtis, four grandchildren and one great-granddaughter.

And it can’t take away all those years at Riley, the impact she made at the hospital and the impact it made on her.

What she loved most about Riley was the people, the patients, the families and the coworkers, she said.

And that those hospital hallways, where so much emotion flowed, kept life in perspective.

“Some days, things weren’t going right, you’re getting behind on work, you’re feeling not great,” Delk said. “Then, you’d walk down the hall and pass a newborn. And there’d be a family out in the hallway crying their eyes out because their baby was dying. And you realized there isn’t anything wrong with my day. It always kept me grounded.”

And it still does. Even right now. As she fights for her own life.