She Reached Out Because She Can Relate

Much of her teen years were spent at Riley Hospital for Children at IU Health. Back surgeries at another hospital, her journey through chemotherapy treatments, blood transfusions and a bone marrow transplant – helped acquaint Ashley Griffith well with the hospital setting.

“Even as tired and sick as she was she still wanted to do homework and be ready for finals. I always told her ‘knowledge and education are never a waste,” said her mom Vicki Griffith. After Ashley heard about another Riley patient Madi Moore, and the 16-year-old’s fight with leukemia, Ashley knew she needed to reach out to the younger patient. For seven months Madi has fought cancer, including five rounds of chemotherapy before receiving a stem cell transplant on August 31.  Still, she has remained on track with her homework – getting all A’s.

Ashley and Madi have never met, but on the same day that Ashley turned 27 – September 13th, Madi read the following words of support: “I had a stem cell bone marrow transplant in 2010. I too was determined to continue my education, throughout my transplant and afterward. I want to encourage you and congratulate you on pursuing your education.”

As she read, Madi said: “This feels great – to know someone took the time and understands what I’m going through.” 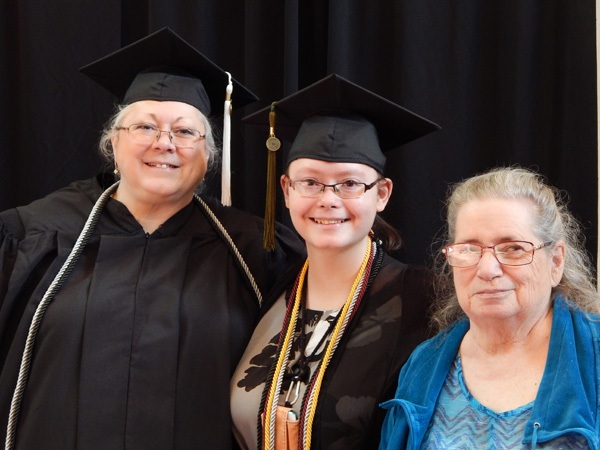 It took her a little longer than she anticipated but Ashley earned a 4.0 GPA with a Core 40 diploma and last May graduated from IUPUI with a degree in Science Health and Rehabilitation Sciences. She also received a certificate in Rehabilitation and Disability. And there’s more – walking alongside Ashley to receive her college diploma on Mother’s Day was the woman who had supported her throughout her hospitalization and healing. Vicki Griffith completed her college degree. “It meant a lot that my mother could graduate the same day as me. It’s another thing we celebrate,” said Ashley.

Looking back at her time at Riley, Ashley says that some of what kept her going was finding humor in every day situations. “For some time I wanted to be a mortician or a medical examiner until I realized I had to touch blood,” she said.

It was when she was shopping for back-to-school clothes that Ashley discovered what she describes as a “dip” in her back. Surgery followed to correct her deteriorating spine. Then two years later, a second back surgery was needed to build and fuse her back. Four months post second back surgery, she showed signs of life- threatening blood abnormalities and was admitted to Riley Hospital

“In a weird way, back surgery saved my life,” said Ashley. To this day, her mom says the symptoms and diagnoses remain a mystery – when her body wasn’t producing red blood cells, she required numerous life-saving blood transfusions. In 2010 she received a blood marrow transplant from her twin brother, Tyler. Both are 21st Century Scholars. Tyler is a graduate of Purdue University where he majored in Industrial Engineering and a concentration in Computer Technology and Electrical Engineering.

“Before the transplant he missed 30 days of school to be sure he stayed healthy. He’s my hero. I wouldn’t be here without him,” said Ashley. As she talks, her mom smiles and adds details about the mystery of Ashley’s illness. Vicki Griffith had a high-risk pregnancy with the twins, which resulted in them spending three days in NICU. Ashley didn’t talk until she was four, was diagnosed with autism and seizure disorders and had intermittent illnesses including mycoplasma pneumonia at the age of nine. 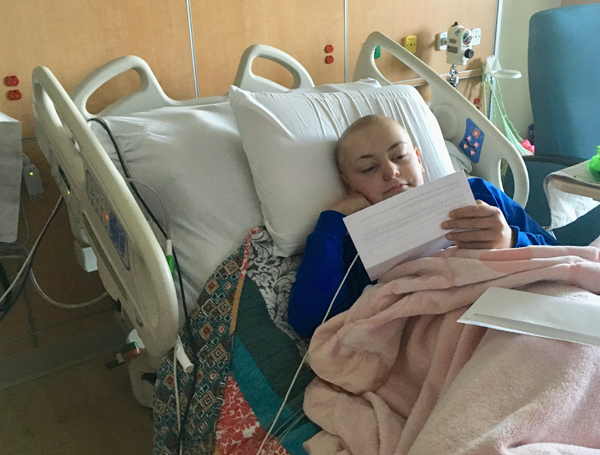 “We don’t know if something early on caused health problems or not,” said Vicki. “It’s all a mystery but we do know Ashley is a fighter and an encourager.” Throughout her illnesses and treatments she has maintained a positive attitude. During college, she endured numerous health complications and lost her father, Randy, to cancer in 2014. One of Ashley’s professors Dr. Kathleen Weaver would bring homework to her while she was in the hospital her first year of college. “I don’t know what I would do without all the people and caregivers at Riley, home, and school who helped me keep going,” said Ashley.

She concludes her letter to Madi Moore with the following: “Determination and optimism are important in going through health complications because they help you see the light in the darkness and the sliver linings in every cloud, even storm clouds. . . Be patient, be brave and have faith that everything will work out.”