She Is Riley’s Epic Gatekeeper

Melissa Sexton is adored by celebrities, respected by hospital administration and admired by just about every department at Riley.

There’s a bustle in the lobby of Riley Hospital for Children. Of course, there is always a bustle. Kids are traipsing about. Red wagons are whizzing by. Moms and dads are looking anxious.

Melissa Sexton is standing in the midst of it all -- at the front door of Riley in her signature royal blue polo, a paper in hand.  She is standing there with a look that few can pull off -- a subtle mixture of stern and sweet.

It is a perfectly fitting place to find Sexton, at the front door of Riley, standing on the welcome mat.

Because if there is a gatekeeper of Riley -- a protector of the hospital, its patients, its families and its staff -- that gatekeeper is Sexton.

Any community group – any sports team or choir or band, any superstar singer, or Olympic athlete – who wants inside this beloved children’s hospital to interact with patients must go through Sexton first.

It is her job to weigh the pros and cons of opening the door to an outside visitor. And as one can only imagine, thousands of people ask to get inside Riley each year to help the kids.

Sexton, whose official title is Child Life Special Events Coordinator but is known at the hospital as simply Mel, fields all of those requests herself. 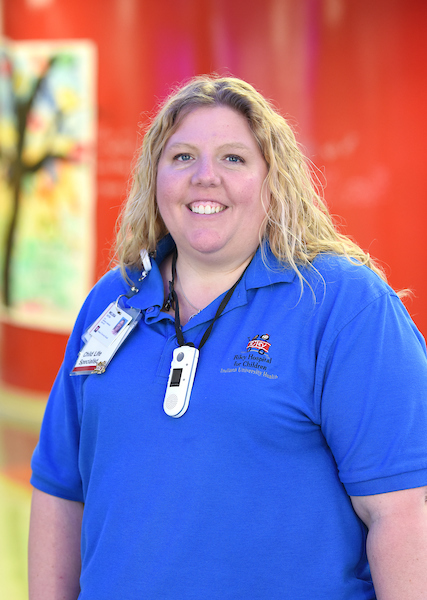 It’s a hefty responsibility to carry, but Sexton said it’s simpler when she keeps her “true north” in mind.

But it’s rarely a hard “no” from Sexton. If the request won't work in the hospital, Sexton almost always tries to find another way for the group or person to get involved with Riley.

“I want to protect the patients, of course,” she says. “But I also am protecting the community, protecting people’s hearts.”

Heartbeat Of The Hospital

The celebrities adore “Mel.” They are her first contact when they want to come visit the kids.

“Mel is my go-to,” says Matt Overton, a former Indianapolis Colts long snapper, who is a tireless advocate for Riley. He is a regular visitor and a friend to many kids. “And when I need anything there, I call Mel. She is awesome.”

Sexton is respected by hospital administration. Most events – from everyday crafts in the Child Life Zone to more attention-grabbing events, such as this week’s Indianapolis 500 party featuring IndyCar drivers -- are hers to put on. She often needs no approval.

“She has earned the trust and communication respect of the key decision makers,” says Sara Barnett, manager of Child Life and Volunteer Resources at Riley, “because they know Mel is always comprehensive in her event planning.”

Those in just about every single department at Riley appreciate Sexton.

“She is the heartbeat of the hospital,” says Maggie Kirles, a child life specialist. “Things would not happen without her here.”

That’s why Sexton’s title is a bit of a deceiving one. Yes, she plans parties, meet-and-greets and special events at Riley. But she wears dozens of other hats.

“She is always stepping up to the plate whenever there is a need,” says Barnett. “She literally takes care of so many behind-the-scenes details that I don't know where she gets the hours in her day.”

Sexton has an incredible memory and seems to know everything, Barnett says.

“She is lovingly referred to as ‘pocket Mel’ because we all know that if we have a question, we can tap Mel for her expertise,” Barnett says.

And Sexton isn’t just the first to welcome visitors. She is also a welcome face to new staff.

“When I meet with new team members and ask if anyone has been especially helpful, Mel's name always comes up,” Barnett says. “She invests in everyone.”

Sexton is the oldest of four children – born within a six-year span – raised in a family that was extremely close.

Grocery store trips in their hometown of Avon were a family affair. Swim lessons. 4-H activities.

“Mom would just pile us all in the car and go,” she says.

Sexton’s parents, Windford and Mary Williams, often worked alternate shifts. Her dad was a metals technology specialist. The coding on airplane parts was his niche.

Her mom worked different jobs as Sexton grew up, but during her teenage years, correctional officer was the gig. 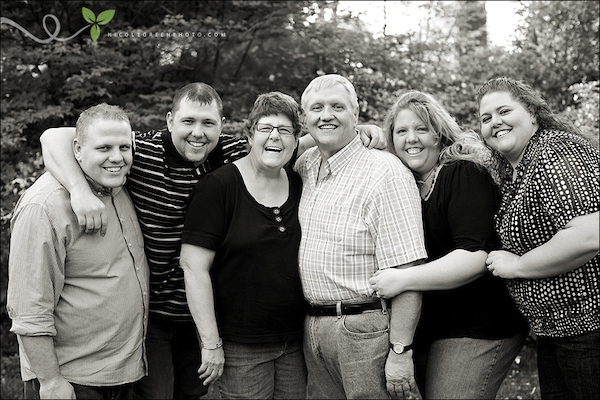 Being the oldest, Sexton held a special role with her younger siblings.

“I was kind of like the mother hen,” Sexton says. “I’ve been herding cats my whole life.”

She treasures those family times now – when all six of them were happy and laughing and together. Making the mundane things in life seem marvelous.

Because those times didn’t last forever. The parents she and her siblings adored were taken much too soon.

Her dad was diagnosed with liver cancer in October of 2010. It cut deep for the family. But he fought through it and went into remission the following spring.

Then the unthinkable happened. Just as Sexton’s dad was celebrating remission, her mom was diagnosed with acute myeloid leukemia in May of 2011.

“They alternated being in remission and relapse,” Sexton says. For 34 months, as her parents battled cancer, Sexton almost lived at Indiana University Health Simon Cancer Center. She grew to love the nurses on 3 East.

But she also grew to need, more than ever, her work at Riley -- where she was both a child life specialist in the stem cell unit and coordinator of special events for the hospital.

It was a major life change for the close-knit siblings. And it was then Sexton decided she would make her own life change – at Riley.

Being up on the stem cell unit was tough for Sexton, knowing her mom couldn’t get that transplant because she had relapsed.

Plus, Sexton had been there for 12 years and for seven years had also been doing double duty as the special events coordinator. After her parents died, Sexton decided to relinquish her clinical role.

In August of 2013, she became the full-time Child Life Special Events Coordinator.

Her years on the unit – Sexton also had worked in hematology and oncology – very much impacted what she does now.

The cancer unit, she noticed then, got a lot of visits, a lot of attention.

“I was able to recognize if that many events are happening here, they’re not happening other places,” Sexton says. “I try to be very cognizant of spreading the events out and making things happen on other units when I can.”

So, when one of those thousands of requests come her way, Sexton thinks of the burn patients and transplant patients and heart patients, too.

After all, in its simplest of terms, Sexton’s job is to spread the message of Riley, what happens inside the hospital, to those on the outside.

And if there is one message she wants people to know about the hospital, it’s this.

“Riley really is one of the best places ever. It’s not a story. We really do care that much for our patients and our families,” she says. “They become an extension of us. That’s not something we just say. It’s what the staff practices. It’s what we do. It’s what we feel.” 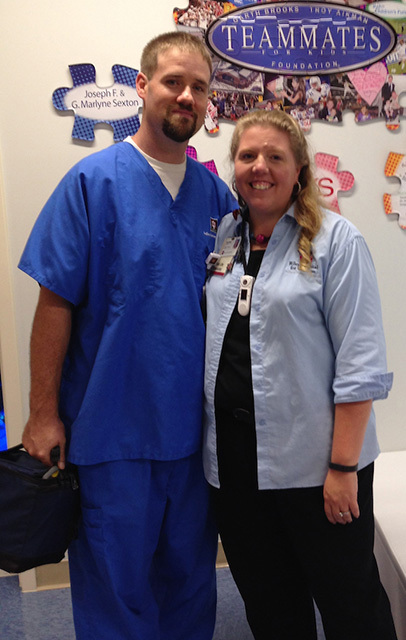 Personal: Married nine years to Steven. They both work for IU Health; Steven is a medical technologist in the cell therapy lab at University Hospital. They carpool to work almost every day.

Hobbies: She and Steven are active at Kingsway Christian Church in Avon, both part of the worship tech art production. They are super aunt and uncle to their nephews and can always be found at track meets, lacrosse, wrestling, basketball, football and baseball games.

Hidden Gem: The couple has a cattle farm with Mel’s brother, where they also raise pigs during 4-H season.