She earned wrestling gold in Poland, then returned to work at Riley

Nicole Higham is not one to throw her weight around – unless it might earn her a medal. Or better yet, a trophy and a world title. 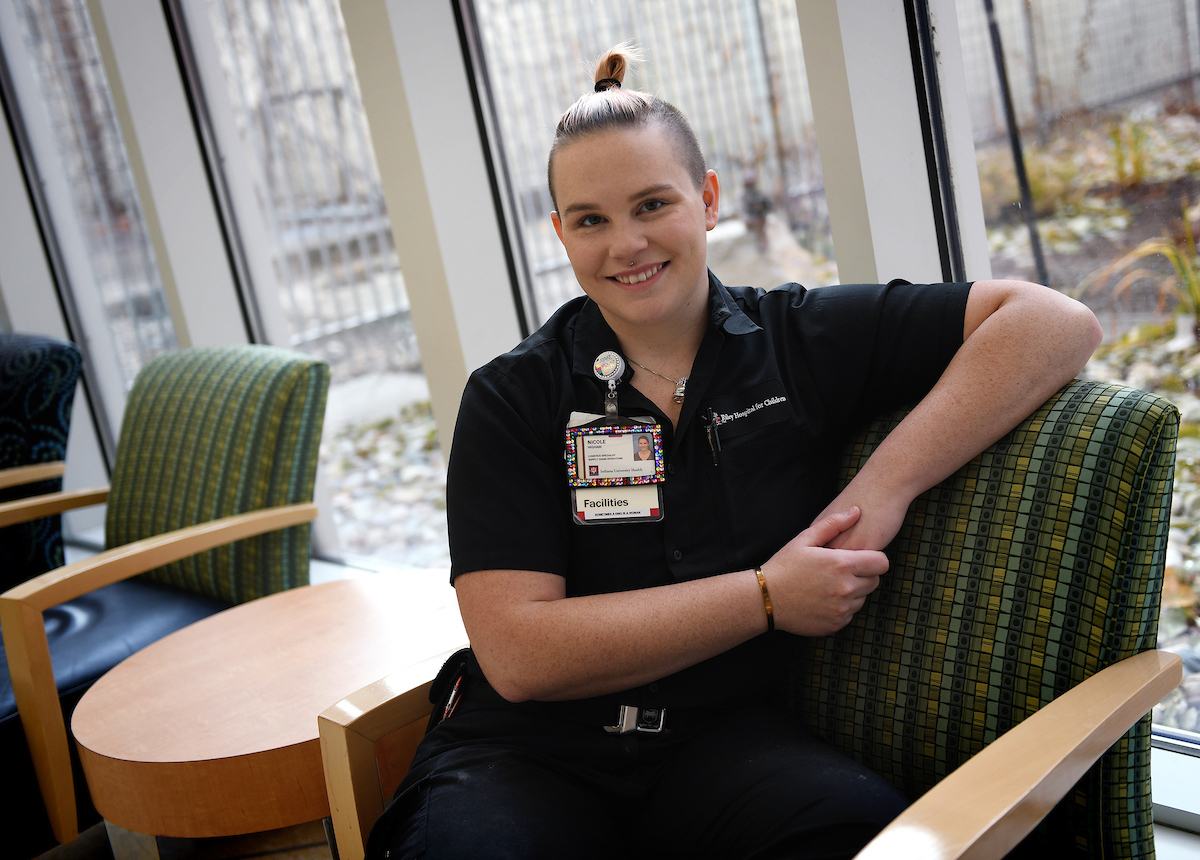 Higham, a maintenance technician in the facilities department at Riley Hospital for Children at IU Health, just returned from Poland, where she won a gold medal at the Mas-Wrestling World Cup 2019 international competition.

“Right now I am still on cloud 9 and going 100 mph,” she said when she returned to work after clinching the title in a sport that dates back to the Vikings. “It’s weird to talk about yourself because it sounds like you’re bragging,” she said, “but in Russia and Poland, it’s kind of like being Michael Jordan, which is pretty cool.” 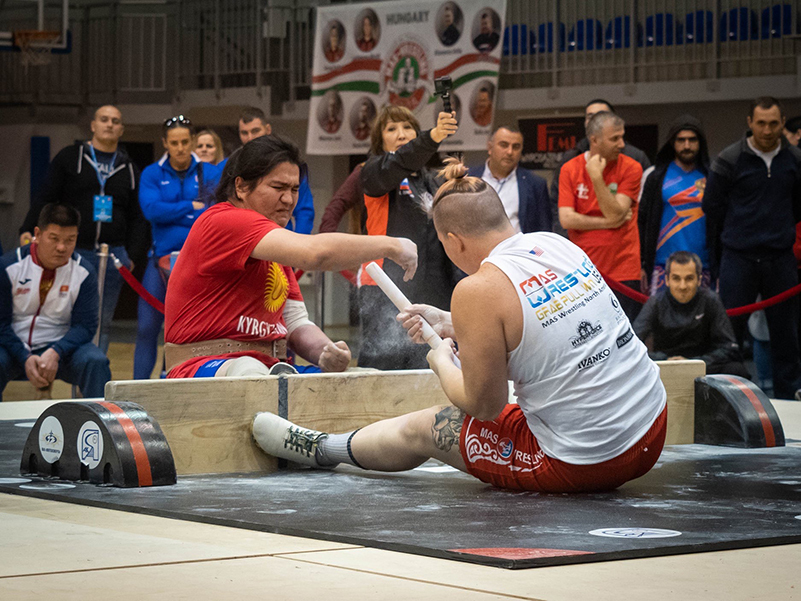 Mas-Wrestling essentially is “a very heated fight over a stick,” the 24-year-old explained.

It is a two-person tug of war using a wooden stick, also known as the “mas.” In a match, the competitors sit on the floor facing each other, with their feet pressed against the footboard divider between them.

Mas-Wrestling, which could become an Olympic sport in the next five years, is the national sport of the people in the Sakha Republic in northeastern Russia. So imagine how they felt when an American beat them at their own game.

Higham went undefeated in 16 matches in the most recent competition, where athletes from 49 countries gathered to show off their strength.

“It’s kind of fun to make other countries listen to your national anthem,” she said, recalling how she accepted the gold medal while women from Russia and Kyrgyzstan to her right and left on the podium took home silver and bronze.

Higham had never heard of the sport until just a few years ago when she was attending a fitness expo for CrossFit and got roped into signing up for a competition.

Turns out she was pretty good.

“When I started, I wasn’t all that strong compared to the other girls, but I have really good grip strength, so once I grabbed hold of the stick, they couldn’t take it away from me. I have since gotten a lot stronger.” 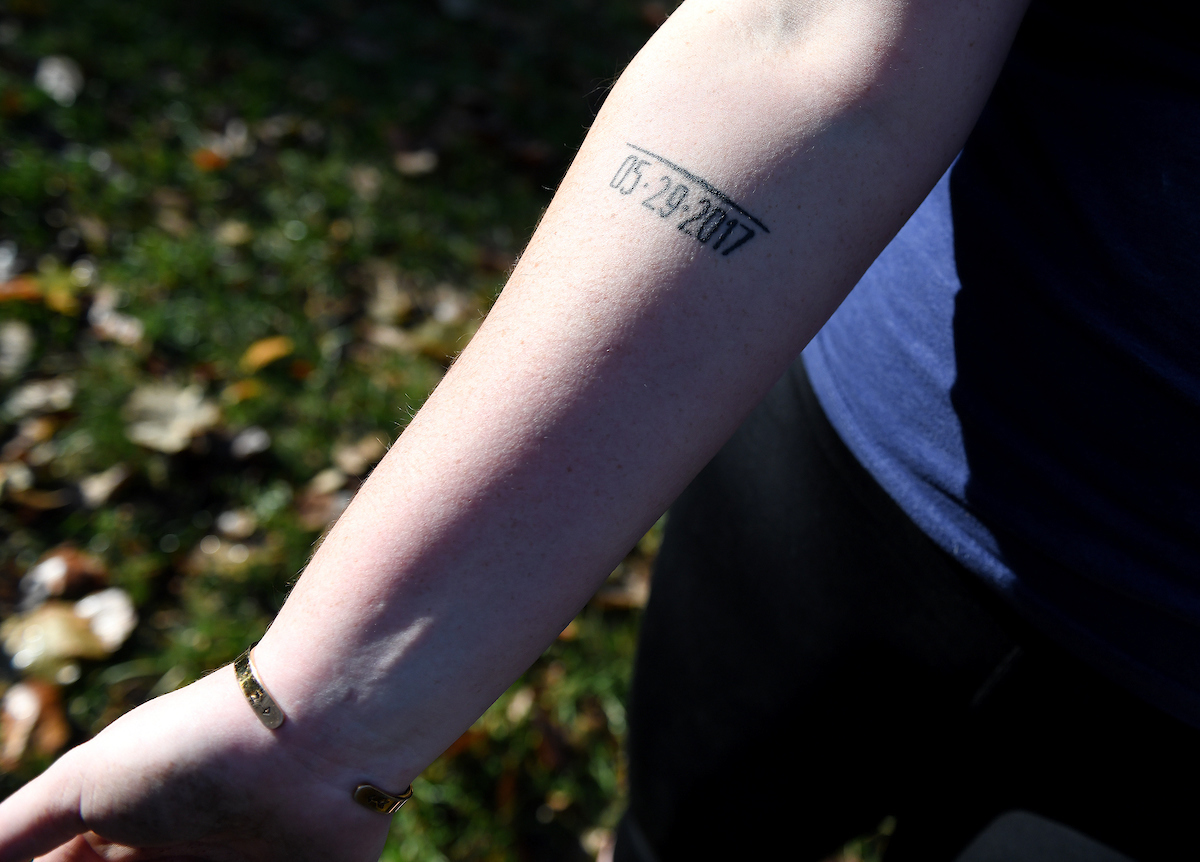 What Higham didn’t know in that first competition was that she had cancer. She was diagnosed about a month later at age 21 with cervical cancer. She has the date of her first chemo treatment – 5-29-2017 – tattooed on her right arm to remind her of her fight.

The cancer helped her become stronger – in body and spirit, she said.

Beating it “gave me a sense of hope and purpose and pride.”

Though now in remission, she decided not to grow her hair back. Instead, she wears a mohawk, sometimes adding glitter to the sides.

Working around the kids at Riley helped her through her own cancer journey.

“They’re never sad and sometimes they’re in the worst possible situation. When I was sick, that helped me a lot. If they can’t be sad, I can’t be sad.”

By virtue of her gold medal, Higham is now ranked as one of the strongest women in the country. She can’t claim the title outright because the rankings in strongman competitions are separate from wrestling, but she competes in those as well. 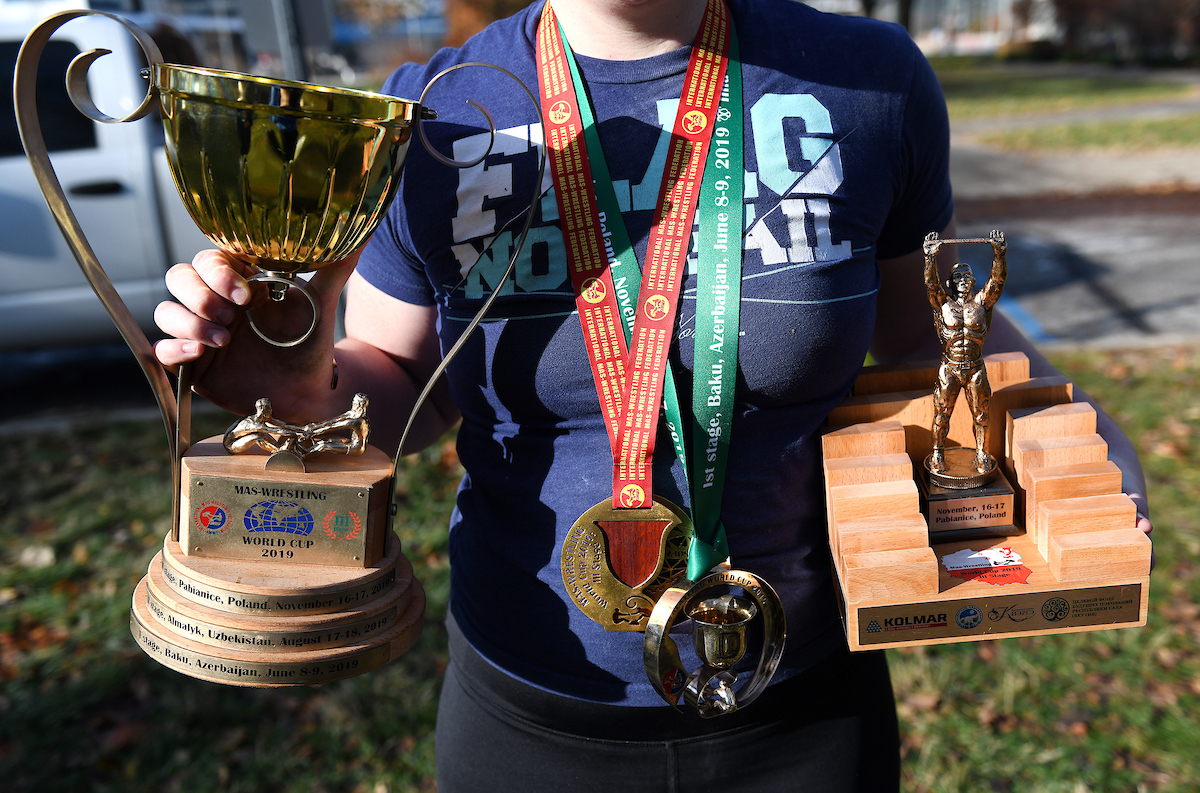 She even demonstrated her skills on the lawn across from Riley last week – lifting a 95-pound atlas stone atop her shoulder and doing overhead presses of about 120 pounds.

“Overhead pressing is my jam. It’s where I get to show off and excel,” she said.

Higham and her fiancé (and fellow strongman), Ryan Korner, built a strongman gym in their garage. Next up is a trophy case to hold all of their awards. Higham came home from Poland with two large trophies and two medals to add to her collection. She sat with the larger trophy in her lap on the long flight home because it wouldn’t fit in her suitcase.

It was a small price to pay for her big adventure.

“Before I started this, the world was very small to me. I’d never been out of the country,” she said. “I have friends all over the world now.”