Second-grader waits for a new heart

After nearly two years on the transplant list, 7-year-old Giancarlo Gomez has spent the past month at Riley. The waiting is hardest on his mom: “The doctors say we’re here until he gets a heart.”

Seven-year-old Giancarlo Gomez takes a giant bite of a caramel apple, scattering peanuts onto his hospital bed at Riley Hospital for Children at IU Health. 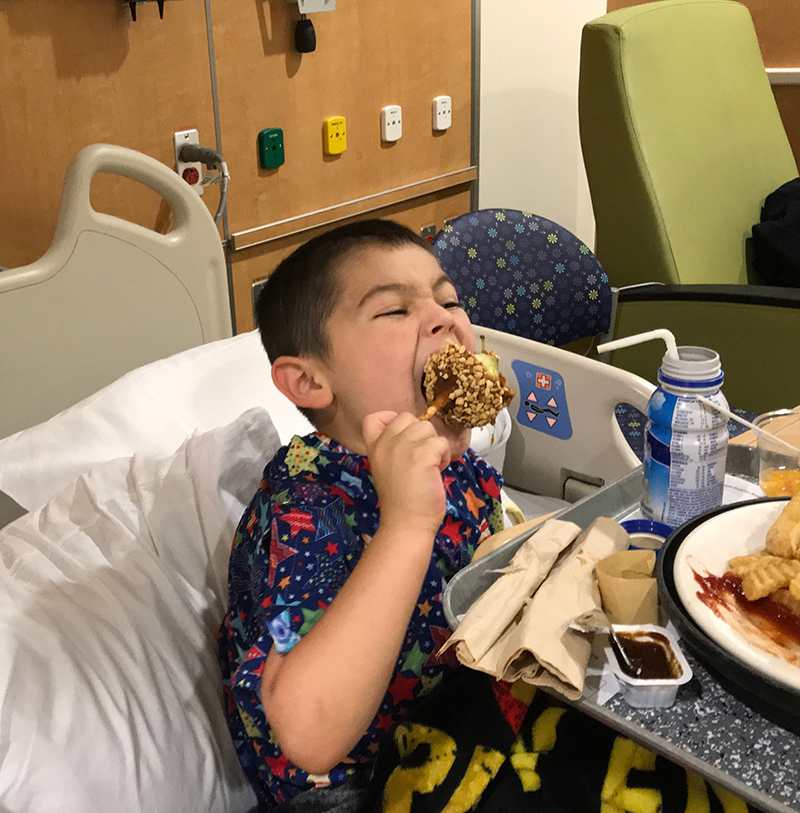 It’s Saturday afternoon, and his mom brought him the treat after getting off work from one of her two restaurant jobs. Left mostly untouched before him is a plate of chicken nuggets and French fries.

“I ate two nuggets,” says the second-grader, who is on the small side for his age, weighing about 42 pounds. Amie Hastings is always trying to beef up her youngest child, worried that his size will delay the heart transplant that he needs.

“In the past year, he gained a pound and we were fighting for that pound,” Hastings said. “He’s about the size of a 4-year-old.”

Giancarlo, whose mom calls him Gianni and whose dad calls him Teddy, was a kindergartner when he was diagnosed with restrictive cardiomyopathy, a rare form of heart muscle disease, two years ago. Without treatment, his heart could have stopped without warning.

He’s been on the transplant list since January of last year, but he was well enough to wait at home while on oral medications.

That changed last month when his body began slowing down as his heart rate began to speed up. Now under the care of cardiologist Dr. John Parent, Gianni was admitted to Riley one month ago to keep his blood pressure under control in preparation for a transplant. 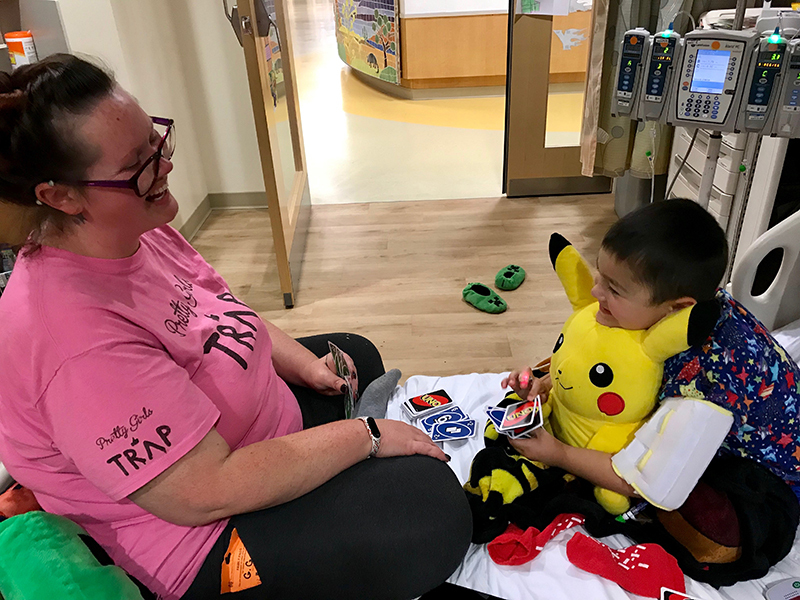 “We’re a pretty active family, and a few months ago I had to get Gianni a stroller because he wasn’t able to keep up with us,” Hastings said. “The doctors say we’re here until he gets a heart, but there’s no telling when that’s going to be.”

Meanwhile, she juggles two jobs while trying to spend as much time as she can at the hospital, counting on friends and family members to fill in when she can’t.

“I think I expected Gianni to stay healthy forever,” said Hastings, who also has an older son, Paolo, who is being cared for by the brothers’ father, Uriel Gomez.

“It’s really rough,” she said. “For the last two hours at work, I was freaking out because I felt like I should have been here. I had a bad attitude until I walked into the hospital, then I felt so happy.”

Because this is where she needs to be – sitting on her son’s hospital bed, sharing a caramel apple and playing UNO on a Saturday night.

When Riley nurse Nathan May comes in to check on Gianni, the boy mentions that he might want to be a nurse when he grows up. 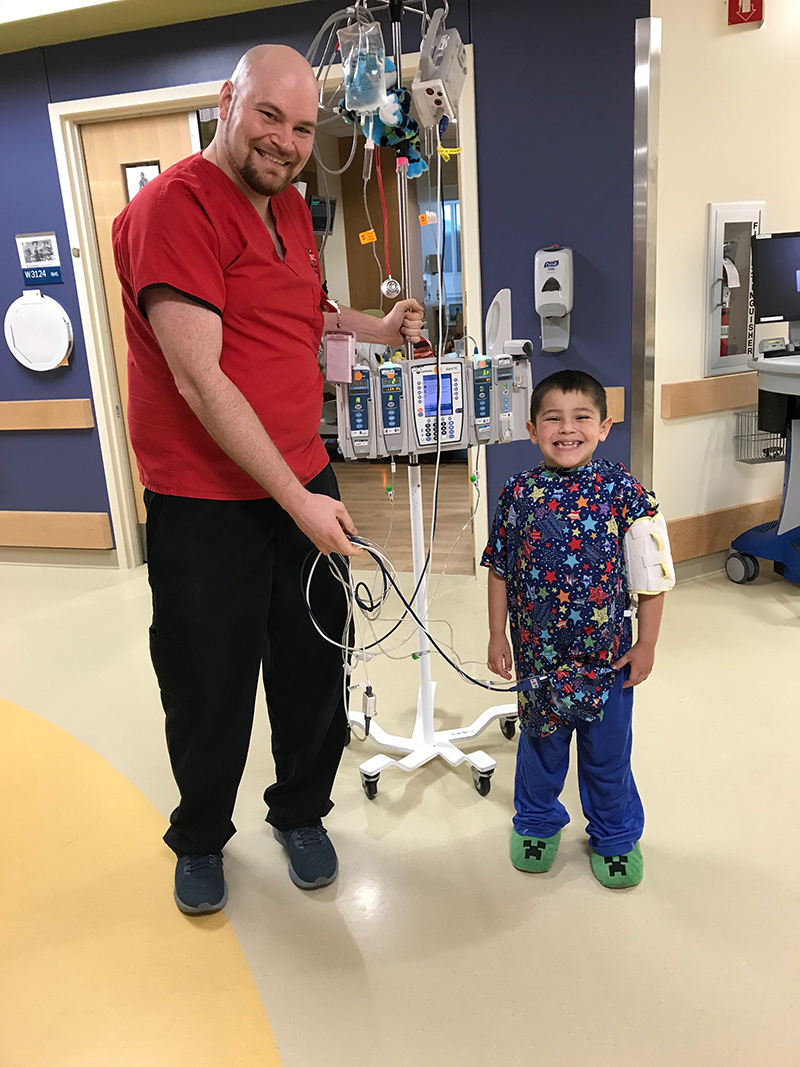 “You want to be a nurse? That’s so cool,” May said, as he helped Gianni out of bed for a walk down the hall. Earlier in the day, May had told Gianni that he once was a Riley kid when he was treated for juvenile arthritis.

May and Gianni share an affinity for the video game Fortnite, and the nurse said he sometimes will play the game with Gianni for a few minutes to keep him company.

To encourage Gianni to walk – something the young boy tries to avoid – May put together a scavenger hunt in the hallway, using pictures of characters from Fortnite, Pokemon and Minecraft. Gianni found all six and didn’t complain about walking.

In his Minecraft slippers, he moves quickly through the hallway one more time, with May at his side.

“Everybody always asks about him,” May said. “He’s popular.”

Though shy when he first arrived, he knows a lot of the patients in the cardiac unit now, including 13-year-old Haley, who is in a room a couple doors down.

“There’s a girl in that room who’s just like me,” he tells his mom. “I have her as a friend on Fortnite. She plays games like me.” 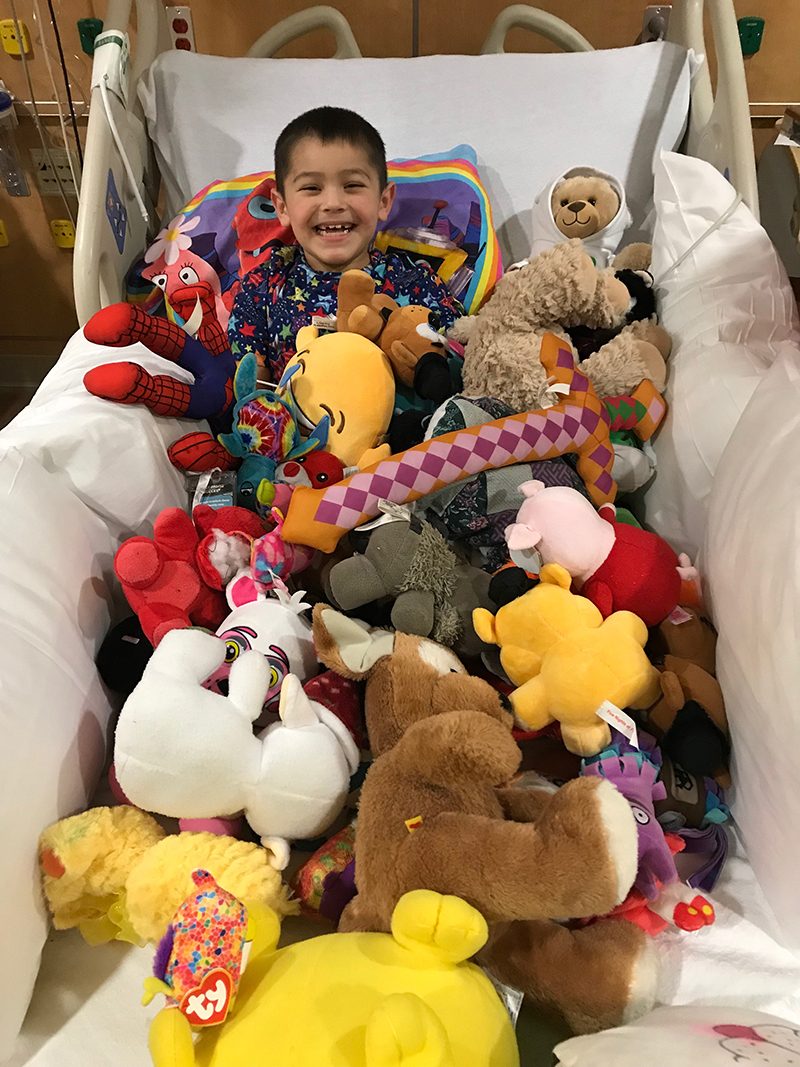 The two have never had a real conversation face to face, but they chat via their video games.

Gianni is in no hurry for a new heart, he says. He’s happy hanging out at the hospital, playing video games and cards with anyone who stops by his room.

Hastings has made her son’s room as comfortable as she can. He has tubs of Legos, family photos and all the stuffed animals his bed can hold. And he has his Xbox, of course.

Still, there are a couple of things he misses from home, he said.

“My bed and my kittens.”