In recognition of occupational therapy month, we are spotlighting the work of a few of our team members who give patients the tools they need to overcome significant health challenges.

Micah Patton walks in to his occupational therapy session with a smile on his face and a question: “Where are the Spiderman Legos?”

When you’re 9, that’s an important question.

His therapist, a cheerful Lynne Kaminski, says she’ll find them, and she does within seconds. Soon, the two are huddled together over the Legos, designing and building ramps and discussing strategies for play.

Micah is on the autism spectrum and has attention-deficit/hyperactivity disorder. He comes to Riley Hospital for Children’s facility at IU Health East weekly to work on fine-motor skills, basketball moves, handwriting and other activities that are helping him become more successful as a student and as a son. 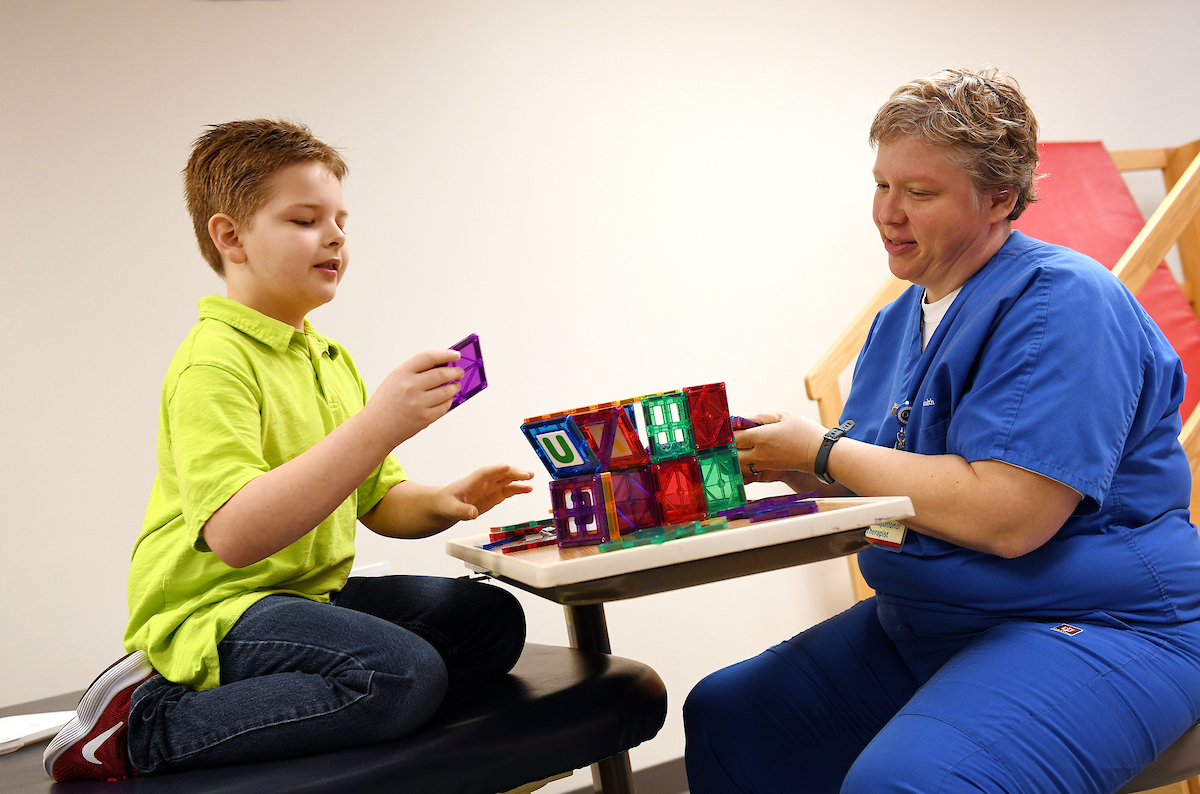 Kaminski and he have a bond built over the past three-plus years, but it wasn’t always this relaxed.

Before Micah learned techniques to curb his anxiety, regulate his emotions, shift his focus and try new things, he was a different kid, his mom said.

“When he first came, he couldn’t even function,” Melissa Patton said as she watched her son work with Kaminski. “He’d flop on the floor like a fish because he was overwhelmed.”

School was a nightmare. His frustration and anxiety over not being able to express himself led to behavior issues in the classroom.

“I was in tears because I’d get calls from kindergarten all the time, telling me to come get him.”

At home, he could be destructive and defiant.

“To see what he’s doing now is just amazing. The difference is night and day,” Patton said. 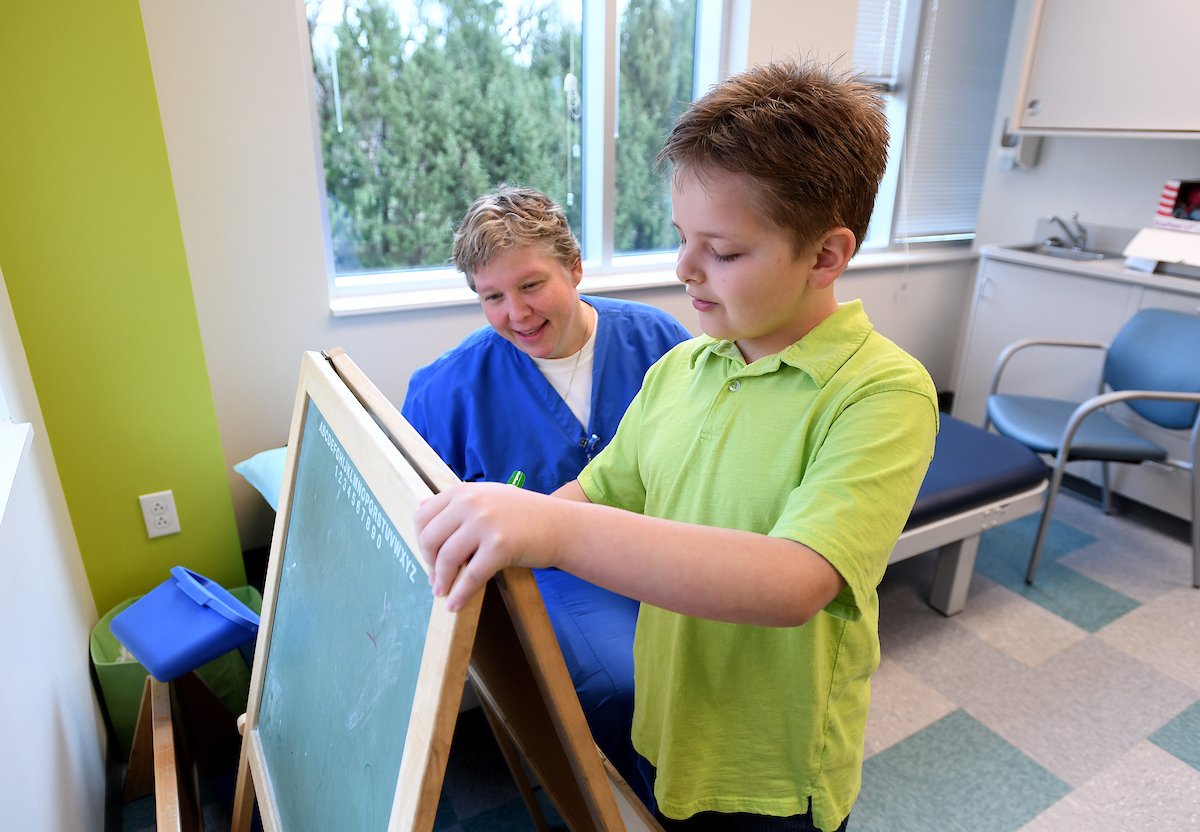 Autism refers to a range of conditions characterized by challenges with social skills, repetitive behaviors, speech and nonverbal communication. According to the Centers for Disease Control, autism affects an estimated 1 in 59 children in the United States today.

Kaminski, an occupational therapist with IU Health since 2008, previously worked with adults who had suffered brain injuries or strokes. Then she had a son, now 8, who was diagnosed with autism.

“I poured everything I had into helping him with his sensory processing disorder,” she said.

And a lightbulb went on. She wanted to work with kids.

“I made the switch and absolutely love it. The things I was learning with my son and the background I had with neuro occupational therapy transitioned so well to help this population.”

During an hour-long session at the East Washington Street health center, Micah will work on fine motor skills through play (Legos); he’ll catch, dribble and shoot a basketball to work on his coordination; he’ll read a sentence, then copy it neatly to improve his handwriting; and he’ll complete an exercise called Superflex, a curriculum designed to help kids with social and communication challenges.

Through it all, Kaminski is offering encouragement, suggestions and sometimes choices – like which activity to do first or second. It’s a way to give Micah a little more control over what is happening. A visual schedule board helps Micah know what to expect and makes the transition from one activity to the next easier.

Kids like Micah often struggle to process how they are feeling, Kaminski said. What does it mean to feel hot, cold, hungry or tired, for example? 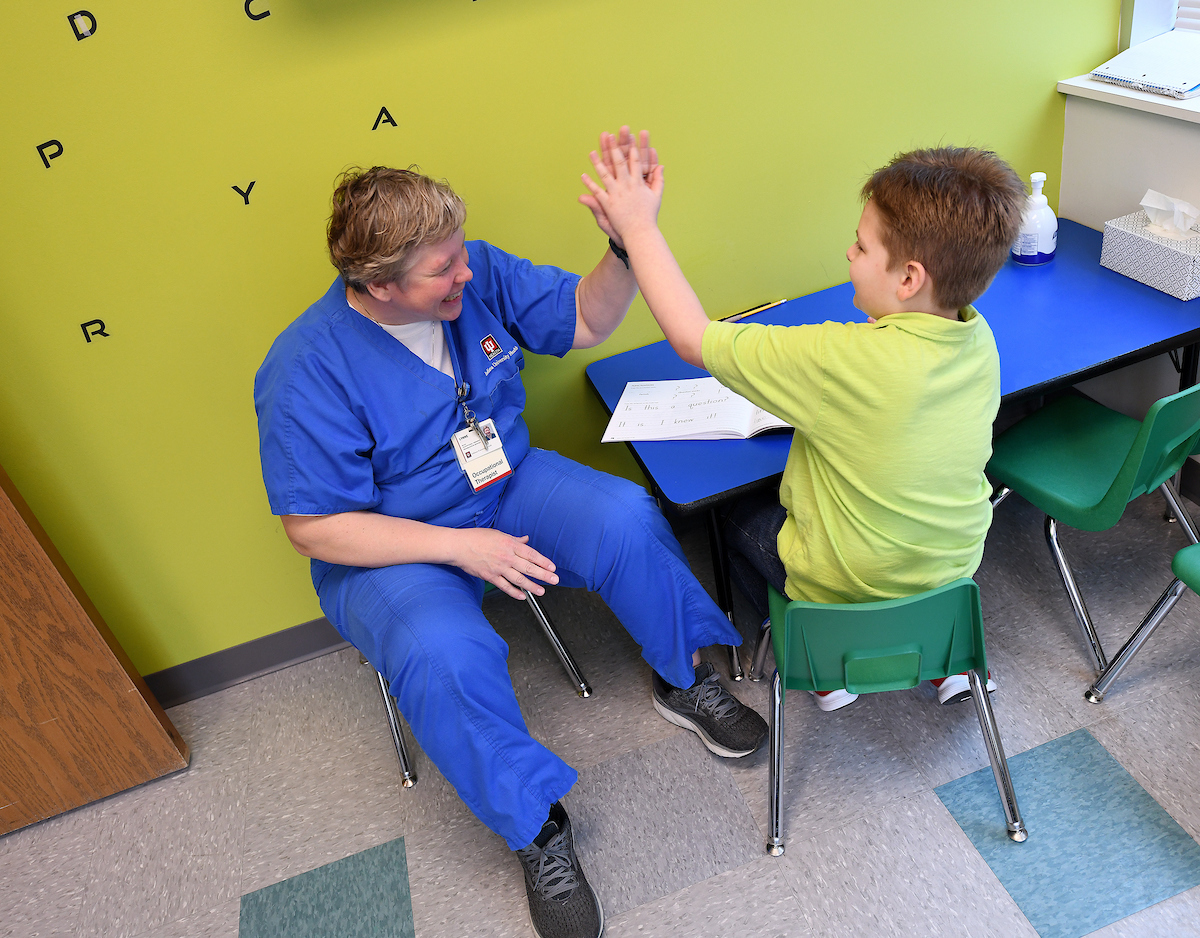 Occupational therapy has nothing to do with working a job, she explains. “It’s the roles we play in our lives. For Micah, that’s son, basketball player, classmate, student. It could be helping them learn to get dressed, write their name, use technology or communicate if they don’t have language.”

Melissa Patton said the work Kaminski does isn’t over when the session ends.

“It takes a good therapist to guide us,” she said.

When Micah has an issue at home or school, his mom knows she can call Kaminski to get suggestions for how to work through it. Kaminski gives the compliment right back, saying it takes teamwork and follow-through by parents and teachers.

The results can be seen in Micah’s smile and his enthusiasm for tackling things that would have once seemed impossible to him.

“It’s been really great to see his progress from a time when his confidence in doing some things was so low where he might just shut down,” Kaminski said. “He wouldn’t move, he wouldn’t participate because he felt so overwhelmed by whatever task we were doing or the situation.”

Now, when he misses a basket or can’t find a soccer ball during therapy, when his pencil lead breaks as he writes a sentence, or when he has to put away those Spiderman Legos, he doesn’t have a meltdown or collapse in frustration.