Sammy’s smile brings out the joy in others

She watched her son die, then be revived: “I remember the look on Sammy’s face before he coded. He was looking at me, then the alarms went off and he was still looking at me, but you could tell he wasn’t there.”

The little boy in the hospital bed is talking through his open door to a passerby in the hallway.

He’s a little bossy, but that’s part of his charm. As he’s chattering, his favorite child life specialist is reading a book to him. 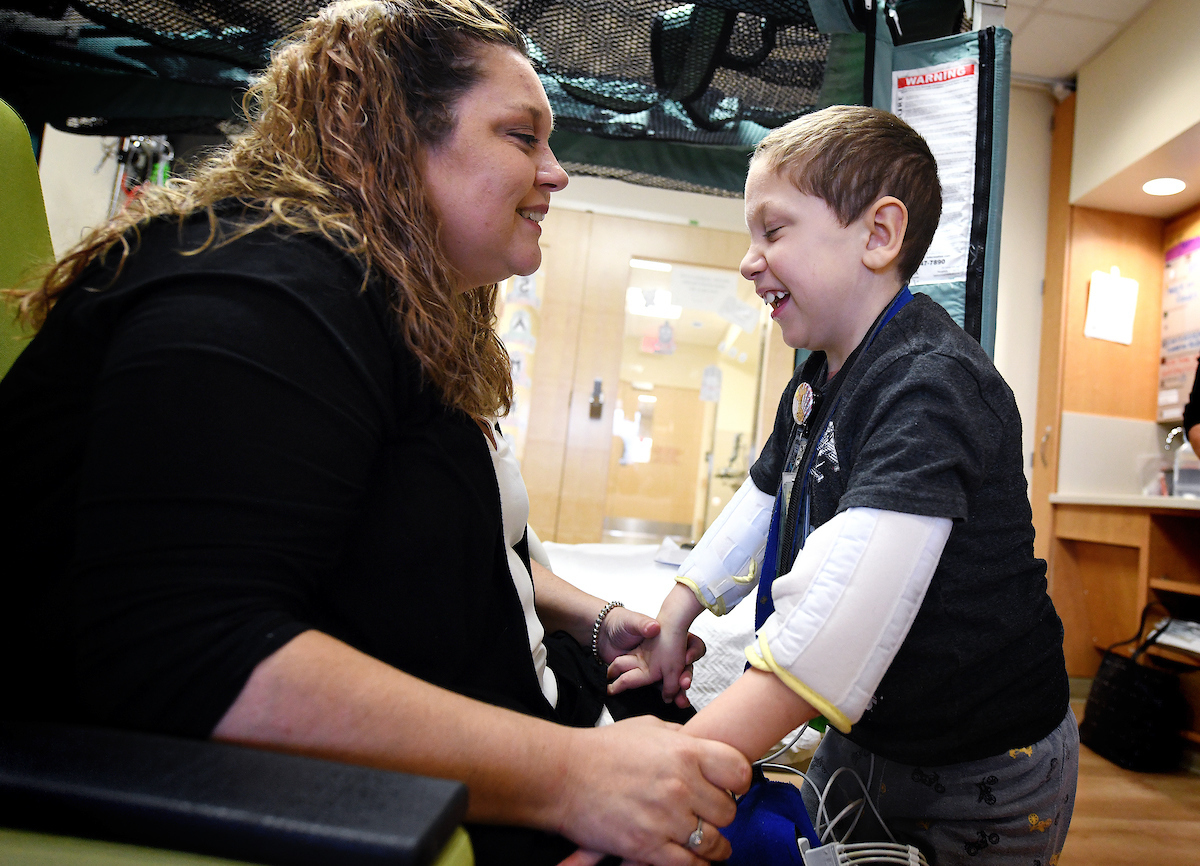 Sammy Curry is a 6-year-old bundle of energy and love. He doesn’t know a stranger, according to his mom, Jennifer. He doesn’t really know where he is or why he’s here either, except for one thing.

When Sammy comes to Riley Hospital for Children, he gets to watch “Thomas the Train” all day every day.

He’s been here this time since July 23 while receiving a six-week course of antibiotics for a persistent fungal infection near a conduit valve by his heart.

Sammy has been a Riley kid since shortly after he was born in Franklin, Indiana. He was born full-term, but his skin had a blue tinge to it. Doctors heard a heart murmur and consulted with staff at Riley after seeing the results of an ultrasound.

The diagnosis was Tetralogy of Fallot, a combination of four congenital heart abnormalities that cause oxygen-poor blood to flow out of the heart into the rest of the body.

He would eventually need surgery, but his parents were able to take their son home two days after his birth in November 2012. 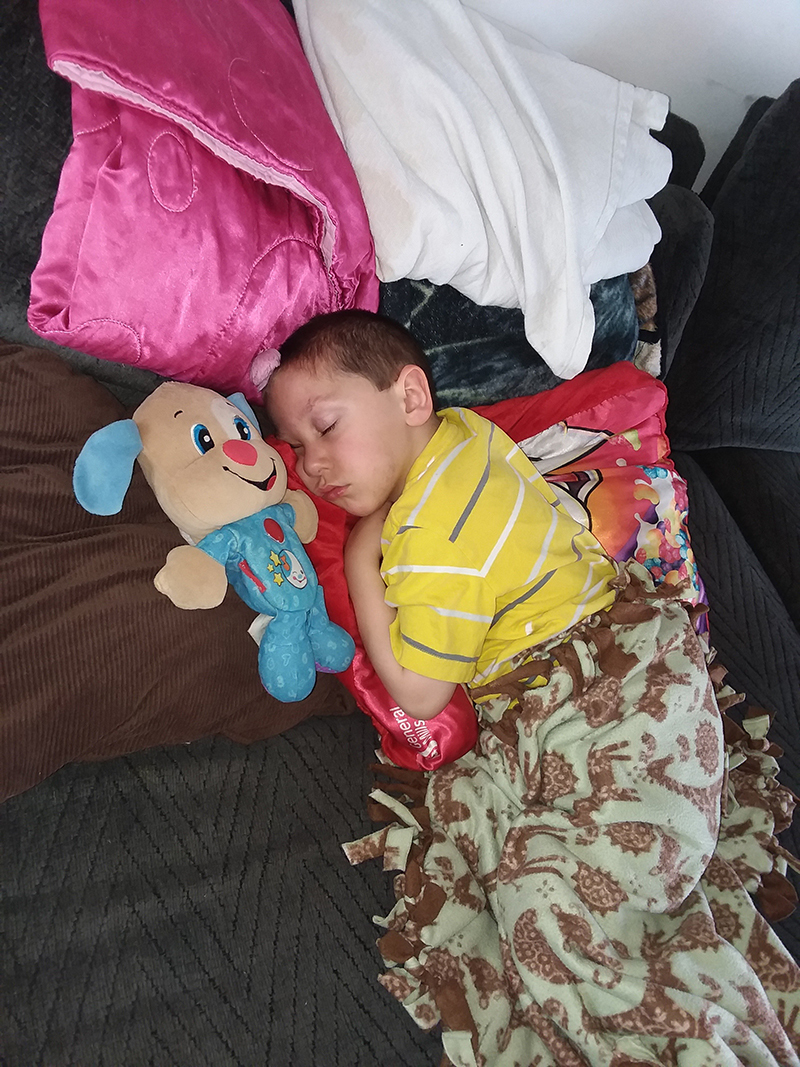 Those early days were a bit stressful.

“We would have to squeeze him like an accordion to get the blood to flow a couple times a day,” Jennifer said.

Three open-heart surgeries, multiple procedures and one cardiac arrest later, Jennifer has come to expect the unexpected from her son, who has an older brother and a younger sister. Another brother died as an infant.

At 10 weeks old, Sammy had a shunt put in to provide temporary relief for his blood flow issues. At 7 months, cardiovascular surgeon Dr. Mark Turrentine performed surgery to repair the heart defects.

Everything went well with the surgery, but the next day things changed. Jennifer had just finished giving Sammy a bottle and was taking a video of him in his hospital bed when alarms started going off.

“He flatlined,” she said.

A team of physicians and nurses arrived in seconds, desperately trying to revive her baby, while Jennifer shrank into a corner, watching everything. She thought he was gone.

“I remember the look on Sammy’s face before he coded. He was looking at me, then the alarms went off and he was still looking at me, but you could tell he wasn’t there.”

It would be 40 minutes before they got enough of a rhythm to wheel him into the operating room, she said. She gave him a quick kiss, then watched as he disappeared down the hall. The next time she saw him, he was on ECMO, a heart-lung bypass device.

But he was alive.

Since that day, Sammy has been in and out of Riley for various issues. The cardiac arrest he suffered resulted in brain damage, but Sammy does more than anyone expected.

He walks, talks, laughs, sings and plays – just on more of a 2-year-old level than a 6-year-old, said Jennifer, who lives in Indianapolis with her fiancé and children. She and Sammy’s dad are divorced.

Coming back to Riley is always hard for Jennifer, but she wouldn’t go anywhere else for Sammy’s care.

“I hate being here, but I trust this team. We’ve had the same team from the get-go. Dr. Turrentine is the only one who will operate on him, and Dr. (Robert) Darragh is the only cardiologist I trust,” she said.

“They know Sammy. They know he will throw a curve ball when you least expect it, and he does every time.” 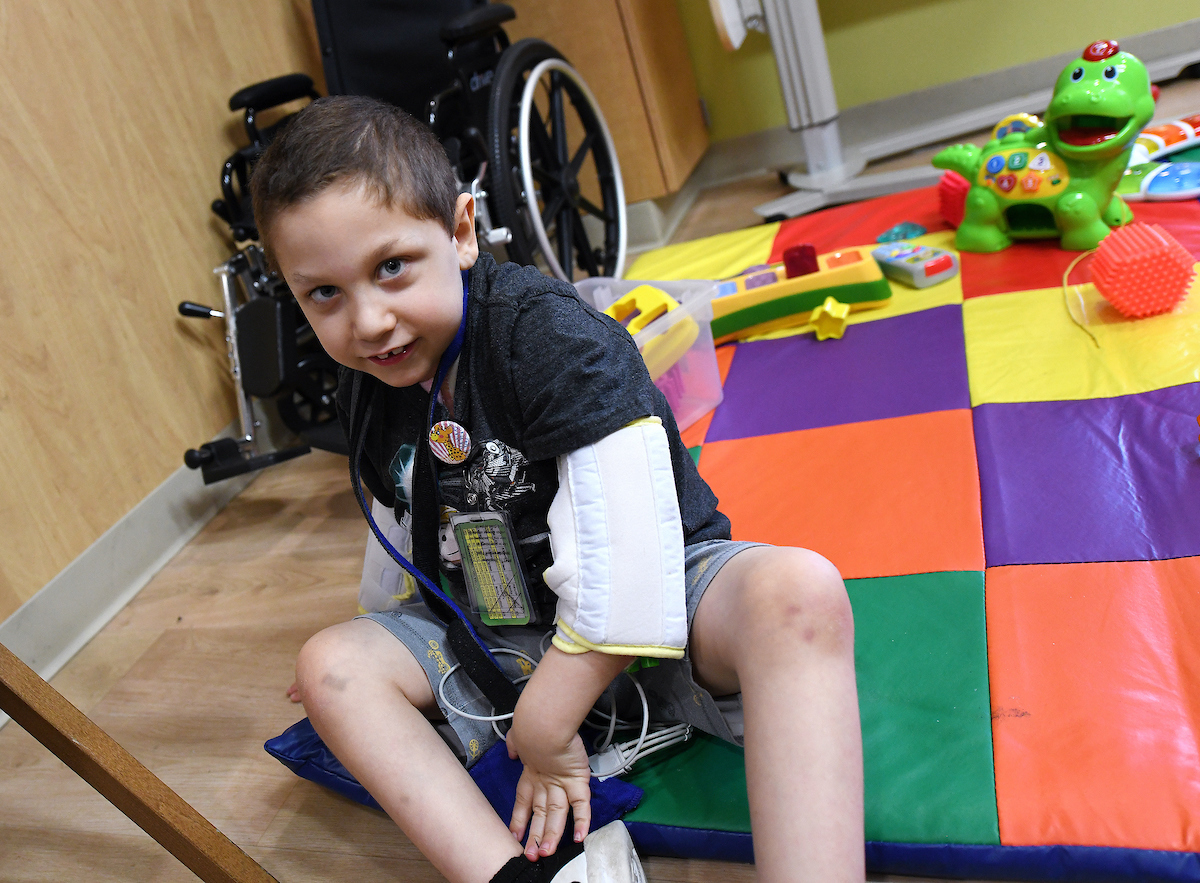 This happy boy, who also has been diagnosed with autism, epilepsy and cerebral palsy, has a hospital room filled with toys, but he prefers to play with a name badge his mom gave him and to watch “Thomas.”

“He’ll throw a ball, but he doesn’t really play with toys,” Jennifer said, though he does like to line them up. He also enjoys being read to. One of his favorite books is a “Thomas the Train” encyclopedia, which he knows front to back.

Sammy is partial to one stuffed puppy that has been with him through every operation, every heart catheterization and every test for six years. He received it as a baby at Riley, and now his “Baby” is his best friend.

No one knows what Sammy’s life will look like long-term, Jennifer said, but she treasures the boy she has now.

“I don’t know if I could be that happy if I had gone through what he has,” she said. “He is funny, he is sweet, and he is caring. He’s been through a lot, but I don’t think I’d change it because I can’t imagine having somebody else – another Sammy. He is perfect. He fits our family perfectly.”