After their baby was born struggling to breathe, an Indianapolis couple has to watch and pray as the newborn is put on a LifeLine flight headed to Riley.

They thought they were at the hospital for a routine delivery of their second child. Of course, a baby is hardly routine, but still, the Indianapolis couple expected to welcome a healthy daughter into the world, then take her home to join her big brother in a couple of days.

There had been no indication that anything was wrong. The baby was full term, but during Amy DeArmond’s labor at a Southside hospital, her daughter’s heart rate dropped more than once, so doctors decided to do an emergency C-section. 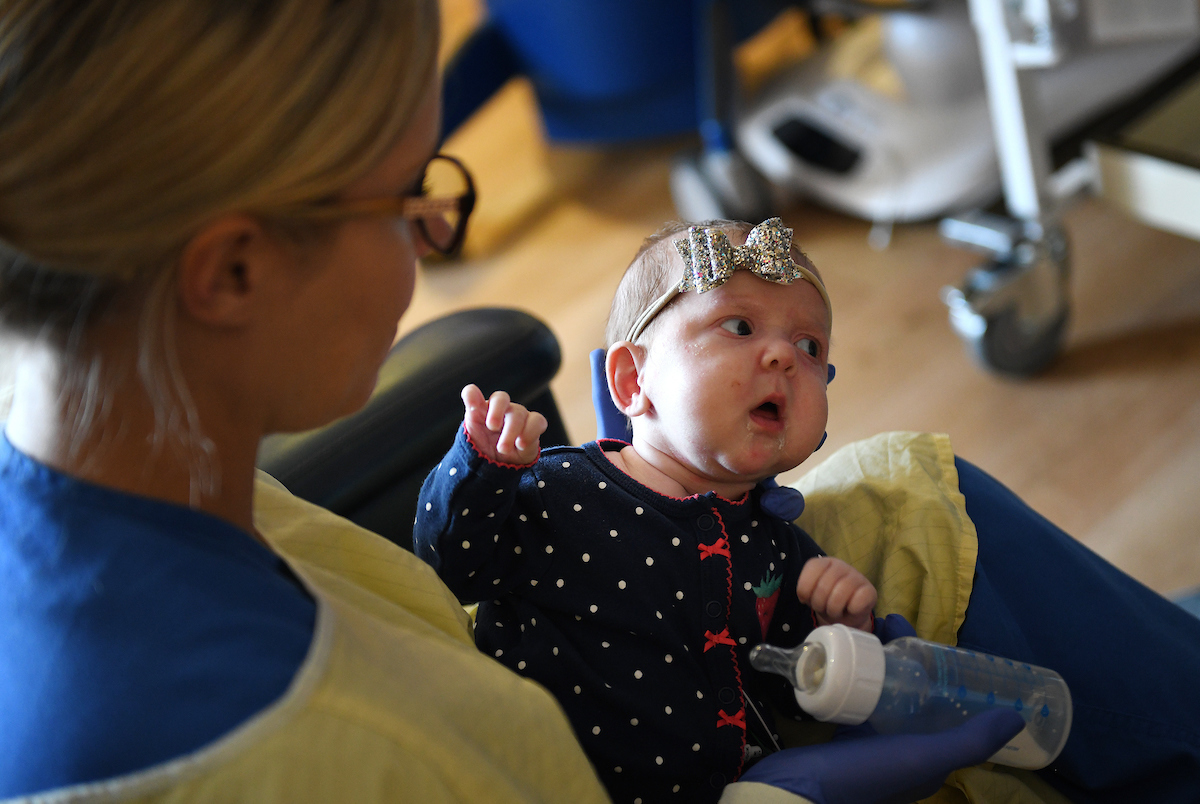 Lyla DeArmond came out of the womb weighing a solid 7 pounds, 14 ounces, but struggling to breathe. She was purplish in color and was whisked away to the hospital’s special care nursery for a little extra oxygen to get her lungs moving.

Though they barely got a glance at their daughter before she was taken away, Ryan and Amy DeArmond were assured that babies sometimes have breathing issues and it was nothing to be alarmed about, so they patiently waited for word from doctors.

When it came, it was devastating.

The hospital had called in the emergency on-call provider that Saturday evening, Sept. 14. It was Ashley Wood, a nurse practitioner with Riley Hospital for Children’s neonatal unit.

She knew immediately that the baby’s lungs were compromised and put in a chest tube in Lyla’s collapsed left lung to assist her breathing. But the right lung also was not working correctly. Wood made the call to IU Health LifeLine to have the baby transported to Riley.

It was terrifying to say the least. Both Ryan and Amy struggled to process the turn of events and the thought of their newborn flying in a helicopter without them.

“The first time we actually saw her was when she was on the gurney about to go on the helicopter,” Amy said. “We could just hold her hand before she left.”

Ryan was able to follow the helicopter to Riley and be there with his daughter, but it would be two days before Amy could get there, and she was still dealing with plenty of pain and mobility issues from the C-section. 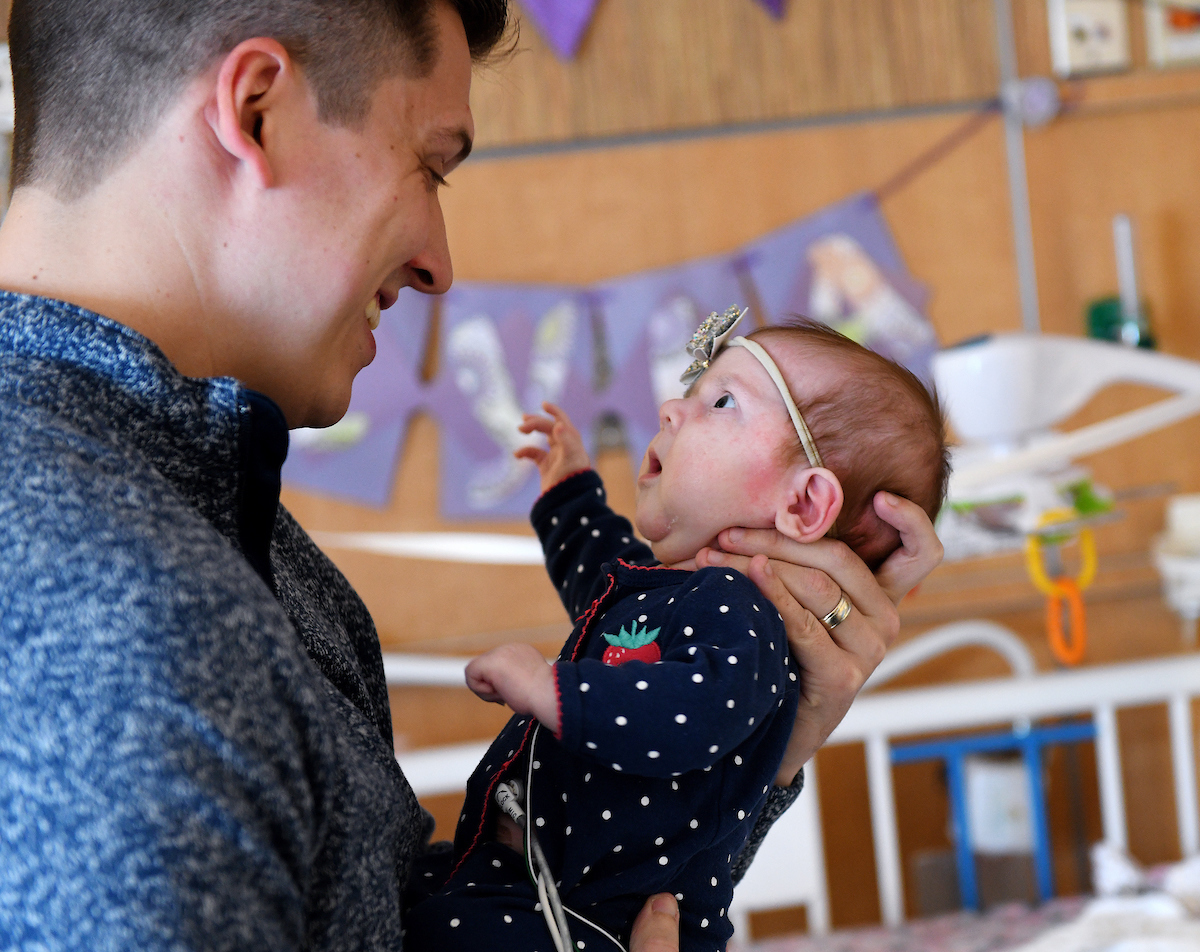 It’s now two months later, and the entire family is breathing easier, thanks to the care Lyla has received at Riley. She is still in the NICU, but after surgery to remove the lower lobe of her right lung, which had massive cysts filled with fluid, she is finally off the ventilator and all oxygen.

Now her struggle is to learn how to eat and swallow without gagging.

Riley speech pathologist Shellie King was helping her with that on Friday morning.

Before a nurse comes in to start the formula feed on Lyla’s NG tube, King cuddles the baby in a chair, dipping her pacifier into formula and letting her suck on it, then attempting to introduce a bottle sparingly.

“Every time we’ve attempted to bottle-feed, she gags and throws up,” Amy said.

She has “trust issues,” Ryan says, after having tubes down her throat.

But on this day, she swallows not just once, but three times. A new record, her dad says.

They are heartened by her progress, hoping that if she can gain weight and keep her formula down, she can come home soon. Perhaps as soon as this week.

“We were hoping we could get her home with no strings attached,” Ryan said, but the G-tube likely will go home with her for now. 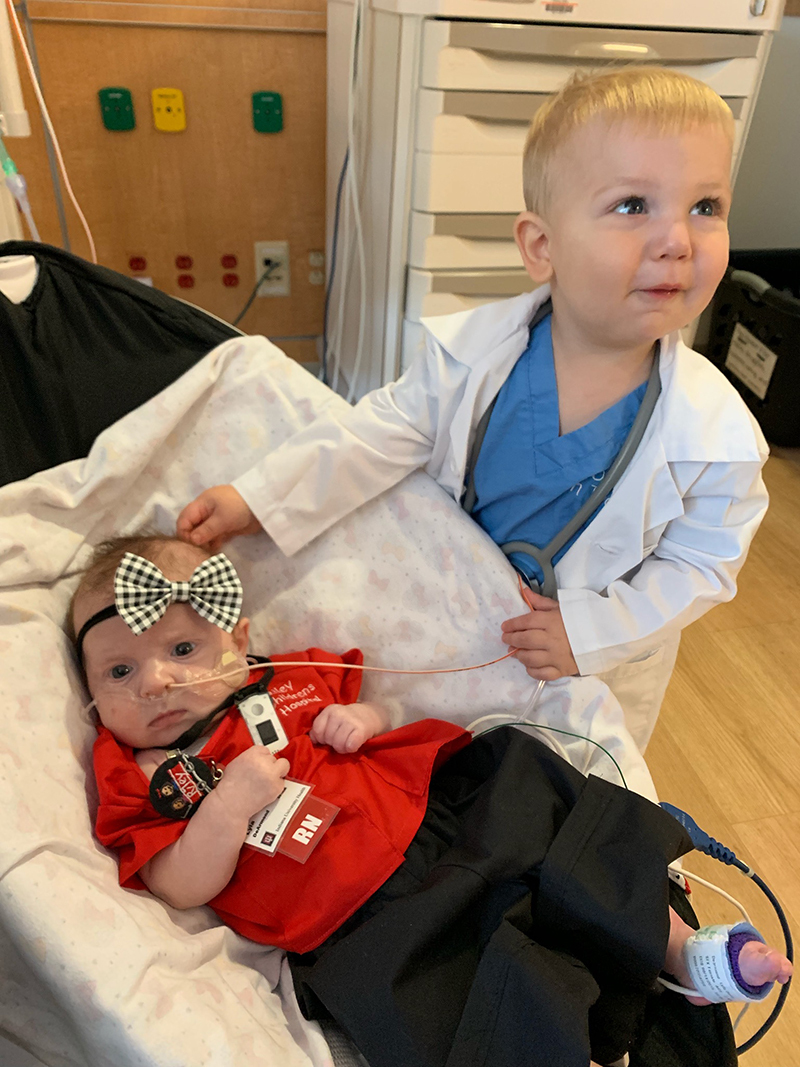 Waiting at home is her big brother, Daniel, 19 months old. He likes his sister in theory, Amy laughs, but he’s not 100 percent sold on the idea of her coming home with them, she said. He’s gotten to visit her in the hospital three times, the most recent at Halloween when he dressed as a doctor and Lyla was dressed as a Riley nurse, with her own ID badge and a fake Vocera communication device.

“He seems to like her. He seems to think she’s great because she’s not at our house,” Amy said. “We’ll see what happens once she comes home.”

Now 9 weeks old and weighing 9 pounds, 14 ounces, Lyla is exercising her newly strengthened lungs with cries that can be heard down the hall. She is very stubborn, her mom says, but she also loves to snuggle.

Doctors say her left lung has healed and her right lung will continue to grow and expand as she grows, with likely little effect on her ability to live a normal life.

Ryan and Amy, both Catholic schoolteachers, are grateful for the support provided them by their schools, friends and family. But they are most grateful to Riley and the community of care providers who have made them feel like family.

They look around the room at the small touches that nurses like Ashley Bowling have added to the walls, including a card with Lyla’s tiny footprint standing in for the Riley red wagon – so cute.

“As terrible as this is, the people here have been phenomenal,” Amy said. “We have really gotten to know them and you feel like you’ve known them your whole life. It’s very comforting. In a time that’s very stressful and exhausting, they make it easier.”