Tina and Kelsey Miller work opposite shifts as neuro technologists at Riley and it couldn’t be more perfect.

The clock strikes 7 p.m. inside Riley Hospital for Children.

Tina Miller is finishing up a 12-hour shift, a busy, hectic day as a neuro technologist.

It’s time for the night shift neuro techs to take over. And one of them approaches Tina with a familiar hug.

Her name is Kelsey Miller. She is Tina’s daughter. And with her, she has a little boy. His name is Jeff, Kelsey’s 9-year-old son. And he’s ready to go home with grandma Tina.

The next morning, when Tina comes back into work at 7 a.m., she brings Jeff with her for Kelsey to take and get off to school.

Kelsey smiles sweetly as she talks about it, grateful she has her mom to be with Jeff. Tina smiles, too.

Being a mother – and grandmother --has always been top of the list for Tina. Kelsey, after all, isn’t her only child. She has three more grown children, two sons and a daughter, and two other grandchildren, two girls.

But Kelsey is the only one who shares the same job title as her mom. And that’s pretty darn cool, Tina says, to see her daughter following in her footsteps.

Growing up, Kelsey didn’t watch her mom as a neuro tech, going into work at Riley.

Tina has a bachelor’s degree in early childhood education from Purdue University. For two decades, she ran an in-home daycare.

It was a little girl she watched, who had a severe seizure disorder, that planted the seed for this career. Tina would even watch that little girl overnight, when her parents went on trips.

And as Tina saw the girl battle seizures, she started thinking about the medical side of it all. The brain and the EEGs.

Tina now specializes in all of that. It was 2006 that she made the decision to go to school to be a neuro technologist. She graduated and started at Riley nine years ago.

Kelsey, 26, followed the same path as her mom – after exploring a couple other career avenues. She started at Riley five years ago.

They both love the patients and the doctors and the team. They both can’t imagine doing anything else. 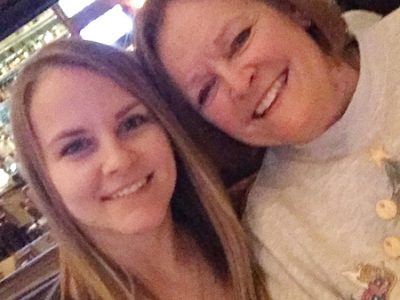 It’s not all that surprising that Tina and Kelsey landed in the same career. They have many similarities. Both call themselves introverts.

“That doesn’t mean we’re shy,” Tina said. “It means we very much think about what we say before we say it.”

Growing up, Kelsey remembers her mom as her biggest cheerleader, always at all her kids’ events, supporting them.

She also was a tough mom.

“You knew not to cross mom,” Kelsey said. “She was the authority figure in the household. We were not scared of dad. We were scared of mom.”

Tina remembers Kelsey, growing up, as a bit of a toughie herself.

“Ever see the word strong willed in the dictionary?” Tina asks.

“Her picture is next to it.”

The two burst out laughing at that.

Outside of work, Tina and Kelsey like to eat out together, crochet and go on vacations with the family. One year, the entire crew went to Gatlinburg, Tenn. There is an upcoming vacation planned for Colorado.

When they’re not at Riley, they still like to talk about work. It’s their passion. And the two will likely have that in common for quite some time.

“I don’t plan on retiring any time soon. I plan on staying here,” Tina said. “I like working here a lot.”

One of the reasons Kelsey followed in her mom’s footsteps

“I think she saw how passionate I was about my job. There is never a day that I don’t want to go to work,” Tina said. “I’m always like, ‘What’s the day going to hold?’”

She knows at least one thing for sure each day will hold. She will start it with a greeting from her daughter Kelsey. And she will end it the same way.