Each family who walks through Dr. Juan Sanchez’ door sees that twinkle in his eye. They feel that genuine care.

The board in his office at Riley is filled with photos of patients. Christmas cards with pictures of kids he’s treating now. Graduation announcements of patients he treated long ago.

It’s hard to explain if you’re not there to see it. But Juan Sanchez, M.D., gets a twinkle in his eye when he talks about those kids.

“Kids are really tough. They go to an intensive care unit, they fight and they get better,” says Dr. Sanchez, a pediatric endocrinologist at Riley Hospital for Children at IU Health. “Kids are really resilient. They are heroes. Many times you see the courage that they have and it is amazing.”

He sees the courage in the newborns, all the way up to teenagers. Dr. Sanchez takes care of kids with diabetes, adrenal gland problems, pituitary gland issues and patients with brain tumors and cancer, whose pituitary glands are affected by the tumor or by the treatment.

Each family who walks through his door sees that twinkle in his eye. They feel that genuine care.

“I can say that I have heard more comments from parents who absolutely love him than any other doctor at Riley,” says Richard Schreiner, M.D., former chairman and physician-in-chief at Riley. 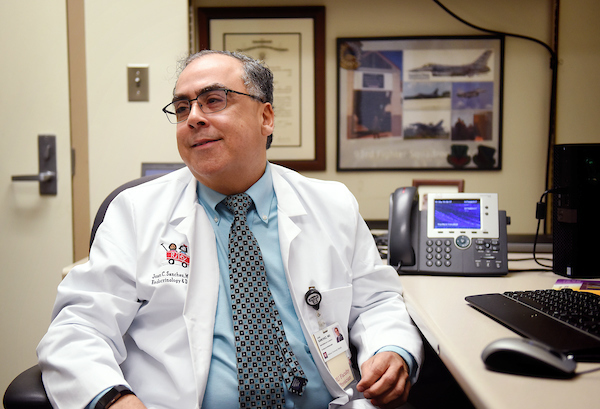 Dr. Sanchez tries to veer from that kind of talk. He clearly does not want to talk about him, but – of course – about the kids. And not just Riley kids.

His mission is to make the lives of all kids better. And, recently, this beloved Riley doctor got to do it for some children who desperately needed his help.

He was standing in line at the airport, ready to return to Indianapolis from New Orleans – where he had attended a conference put on by the American Diabetes Association.

In Dr. Sanchez’ hand was a bag from that conference. A man saw it and approached him, asking if Dr. Sanchez was an endocrinologist? Yes. Would he be interested in helping kids with diabetes in Ecuador?

Of course he would be.

That was just a few months ago when Dr. Sanchez became involved with Life For A Child, an organization that provides education and resources to children with Type 1 diabetes.

“Unfortunately, many places in the world, the children may die because they don’t have access to the insulin, to the supplies needed,” he says. “So, it’s important to create awareness.”

Many countries don’t even diagnose the disease, especially if children are living in a very remote area.

Weeks after that meeting at the airport, Dr. Sanchez was in Ecuador. 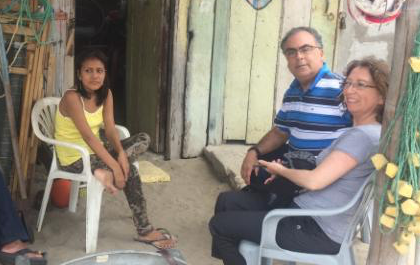 He gave many talks in his weeklong visit -- at hospitals, to doctors, to nurses, to educators. He did Q&A sessions with patients and their families.

And he went on home visits. That was his favorite part of the trip.

He met a girl who had recently been hospitalized for her diabetes, which had gotten out of control. He was there to talk to her family about how to make sure that didn’t happen again.

Dr. Sanchez was raised in Puerto Rico, one of four children. His father was an administrator at an electric company. His mom stayed home. 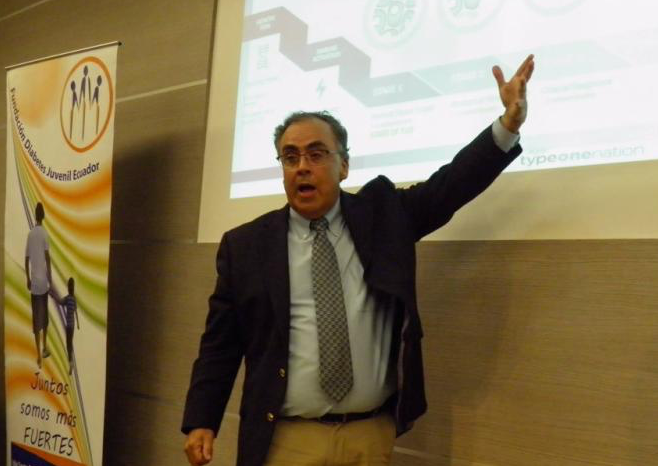 As a kid, he was really good at science. He liked it a lot. And, as he went to medical school at University of Puerto Rico, he started to figure out endocrinology would be the perfect specialty.

It was a milestone for his family.

While working as a pediatric endocrinologist in Miami, Dr. Sanchez got the call from Riley. That was 19 years ago.

“It had a great reputation,” he says, “so I was very glad to come to be part of the Riley team.”

And over those nearly two decades, Dr. Sanchez says one thing has stood out.

Personal: He met his wife, Carol, in Miami where she was a nurse. They have one son, Robert, 25, who is finishing his degree in mechanical engineering.

Outside of Riley: Dr. Sanchez is going for his black belt in karate. He has a purple belt now. He can play piano, trumpet and has plans to venture into plenty of other hobbies. “I think it is important to keep yourself learning,” he says. “Always learn something new.”

When Ryan Daines’ parents realized he had type I diabetes, they took him straight to...

How to Help Your Child Manage Type 1 Diabetes During Summer

​For children with Type 1 diabetes, a lack of school structure coupled with an inconsistent summer schedule can wreak havoc on blood sugar control.