Kalkidan Sirbaro, 12, was born in a remote area of Ethiopia. Blinded by a brain tumor, she was brought to the United States by missionaries who sought help from doctors at Riley Hospital for Children at IU Health. Sirbaro shows appreciation for others through her artistry – creating handmade items from yarn.

Doctor Daniel Fulkerson a neurosurgeon with Riley Hospital for Children keeps a small square of knitted cloth tucked inside the pocket of his white coat. The square was knitted by one of his patients, 12-year-old Kalkidan Sirbaro.

“It reminds me of Kalkidan’s positive attitude. She reminds me that good things do happen to people,” said Fulkerson, who operated on Kalkidan in 2014 to remove a brain tumor that robbed the young girl of her sight. 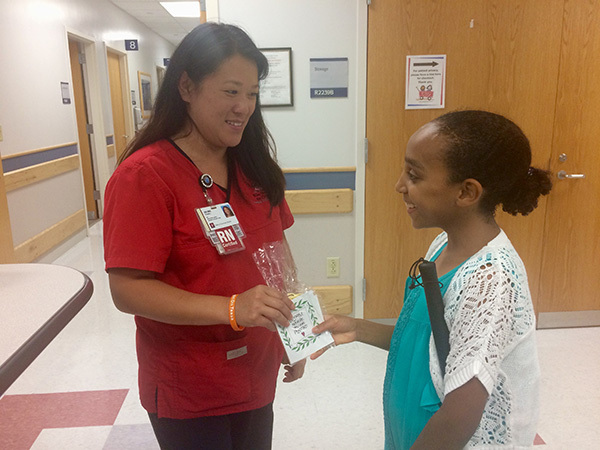 On a recent week day morning, Sirbaro returned to Riley Hospital greeting Fulkerson and other staff members with warm hugs and handmade gifts.  Wearing a turquoise dress and a big smile, she sat in front of several TV cameras poised and ready to tell her story. She couldn’t see the people behind the cameras but she felt the heat of the lights. She was told several times that she was a star, but that compliment meant little to this humble soul.

Like the heat of the camera lights, Sibaro depends on the sense of touch to complete some of the most remarkable tasks including creating handmade gifts from colorful balls of yarn.  The art of making those gifts is something she considers a job.

“I feel excited anytime I have a job,” said Sibaro. “I was born in a place where you had no time to sit. The only time you rested is when you went to bed, so I still have that blood in me – that need to work.”

In her native Ethiopia, Sibaro shared a 300-square-foot thatched house with her parents, three younger siblings and the family’s farm animals. The children slept on a dirt floor. In the coldest seasons, temperatures dropped to about 40 degrees and the family used an open fire to warm their home.

“We never let the animals out at night because there were hyenas everywhere and they would kill them,” said Sibaro. She would awake at 5 a.m., sweep the floors, let the animals out, sling one of her siblings on her back and walk miles to fetch as many as seven gallons of water. Then she would go to school, come home and start over again.

Sirbaro has experienced more in her 12 years than many people will experience in a lifetime. And for the most part, she doesn’t think her life is extraordinary.

“This is my life. This is where God has brought me and I am so thankful for all the doctors and people who have cared for me,” said Sirbaro.

It’s a different life than she experienced in Ethiopia where rural hard-working families often live on less than $1 and 2200 calories a day. Medical care is scarce in the mountainous areas. So when Sibaro’s family recognized her declining health – punctuated by persistent headaches, they left their rural village and walked hours seeking medical attention.

At the age of seven, Sibaro was brought to the United States by medical missionaries where she received her first surgery at a hospital in California to remove a brain tumor. But when it grew back, she was brought to Riley Hospital for treatment.

“I call this type of tumor (craniopharyngioma) the cockroach of brain tumors because they almost always grow back,” said Fulkerson. “After we completed the second surgery, we got a charitable donation for radiation therapy. There were a lot of different services from Riley working together,” said Fulkerson. He added that the benign tumor tends to grow near the eye nerves and hormones. In addition to causing blindness, the tumor has impacted Sibaro’s growth. 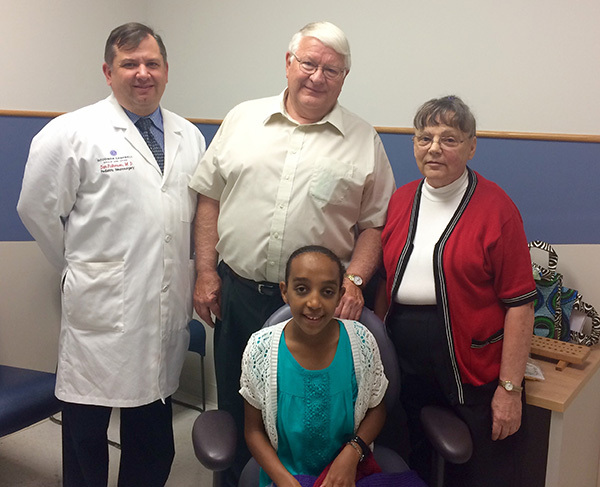 “This is a remarkable story of a child with a brain tumor that made her small and took her sight and yet she’s a very positive young lady who brightens the lives of everyone she meets,” said Fulkerson. “Her knitting is an expression of her outlook on life and is a reminder to me of why we go into medicine.”

When David and Annette Mains were contacted by a California orphanage seeking temporary housing for Sibaro, they knew because of her medical needs, her stay in Indiana would not be temporary.

The couple operates a boarding school in Huntertown, Ind. – just outside Fort Wayne - where Sibaro lives and attends school with seven other children, she calls her sisters. All were born in Ethiopia and some have been in the United States for 10 years.

“She knew no English when she came here, but she is remarkable,” said David Mains. “She goes grocery shopping with me and knows all the clerks and shows such sensitivity to others. Once when a woman in the store told her about the loss of a child Kalkidan stopped right there and prayed for her,” said Mains.

“I like to encourage people who are down,” said Sibaro. “I tell them there is a reason you have hard days – without hard days you won’t learn to appreciate the good days.”

Annette Mains said Sirbaro loves to tell stories and she loves to sing. One of the doctors who cared for Sirbaro volunteered to pay for her voice lessons.

It took little encouragement for Sibaro to share her gift of song with a small audience gathered around her at Riley Hospital.  “I’m not shy,” she said and began singing: “Amazing Grace, how sweet the sound. I was blind but now I see.”

In addition to voice lessons, Sibaro is learning to play the guitar and is learning Braille. Her favorite subject is science.

“My parents could have been very sad about losing a daughter but they were happy because I was coming to be with great doctors,” said Sirbaro, a fifth grader at Heritage Mission boarding school.

She sends small gifts back home to her family but anything elaborate would be frowned upon. “I want my parent’s friends to respect my family. If they see that they have something nice, they may be jealous. My father works hard for our family.”

When Annette Mains first met Sibaro, she recognized the young child’s work ethic. It was something engrained in her and Mains needed to find something that would keep the child busy and also make her feel useful. She introduced Sirbaro to a primitive weaving technique using sticks and a pegboard where she began making small projects such a hot pads. She packages the homemade gifts with a card that reads: “Today is a great day to be amazing.” Over time she began knitting other projects such as scarves, mittens, hats and socks. She enjoys giving the gifts as much as she enjoys making them but her ultimate goal is to make dresses for homeless children.

“I know how others have so little. I want to make them something special,” said Sibaro.

And she has another goal to: “If I get my eye sight back, I’d like to become a surgeon and help other children like I’ve been helped.”

“Her recent scans were clear but we’ll need to be diligent in checking and monitoring her,” said Fulkerson. “All I can say is the things that would have knocked down anyone else have given her strength to keep going,” said Fulkerson. “She is just amazing and just keeps on going and inspiring others.”

A Face on Fire: How Riley Soothed One Child’s Pain

After being diagnosed and treated for trigeminal neuralgia, Racheal Opaczewski has a new life.

The procedure, called a stereotactic laser ablation, is a minimally invasive surgical management strategy for many types of intracranial lesions. “Stereotactic" means using a GPS-like system to precisely place a laser in a brain lesion,” says Dr. Raskin.

A Look at a Leader: Jeffrey Raskin, MD

“Children are so resilient and so wonderful to work with,” he says. They are one of the biggest joys of my job.”