Dr. Andrew Jea’s passion for medicine began as a teen when his sister got sick. Now he’s leading Riley’s neurosurgery unit: “Our vision is to be a top 10 pediatric neurosurgery program in the country. We’re rising very quickly.”

Dr. Andrew Jea is not the type of guy to command the spotlight. He’d much rather share it with the people around him.

So when the pediatric neurosurgeon was asked to appear in IU Health’s “This Changes Everything” marketing campaign, he didn’t want it to be about him. He originally suggested they share the stories of his colleagues, stories he thought would be just as interesting – if not more so – than his.

“Everyone here has made far more contributions to our patients and to Riley than I have,” he said modestly. 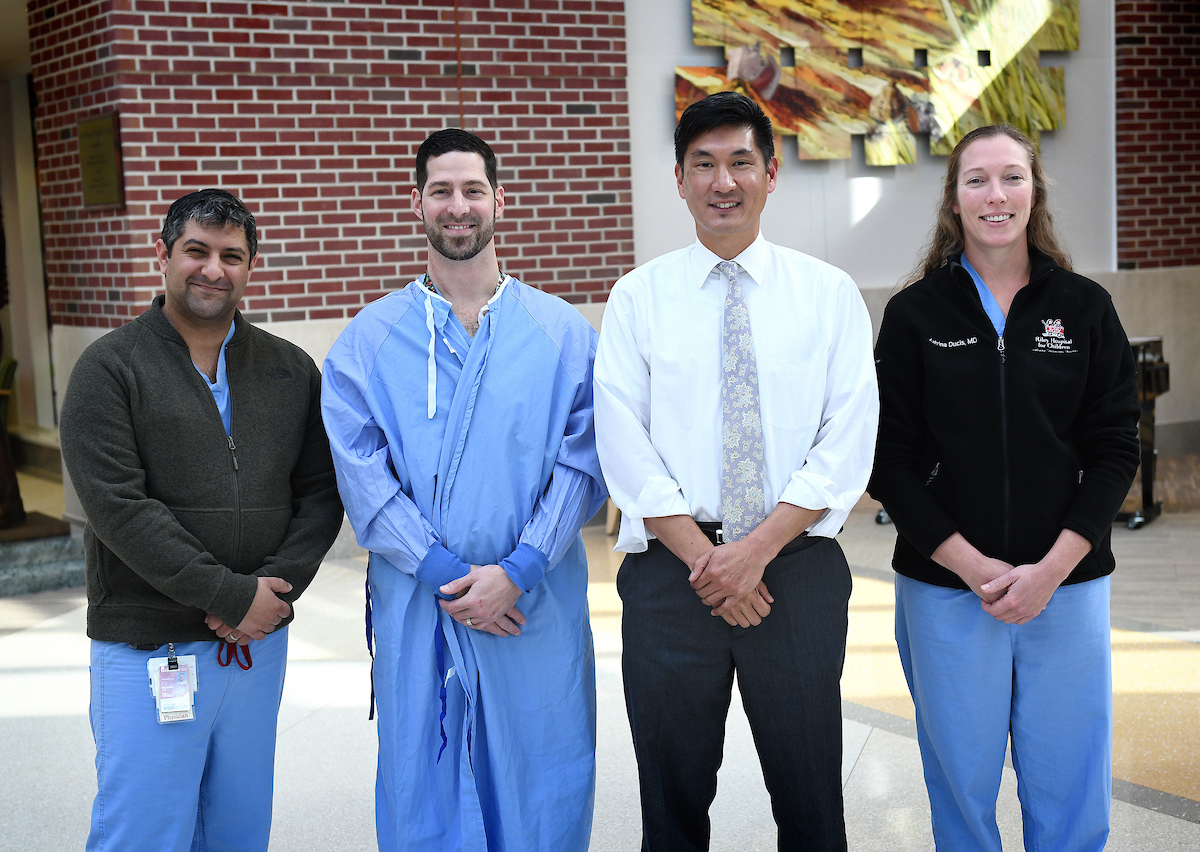 But Dr. Jea is also a team player. And he knew this would be an excellent opportunity to spread the word about the awesome team he works with as chief of pediatric neurosurgery at Riley Hospital for Children at IU Health.

So that’s why the sports-loving surgeon agreed to a video shoot of him playing basketball with his twin 9-year-old sons, while a bit of his personal/professional story played out.

“The only stress I had was to make sure I made a shot,” he said with a smile.

Dr. Jea has three children with his wife, Dr. Lourdes Eco-Jea. They came to Indianapolis from Houston, where he was with Texas Children’s Hospital for several years.

His kids like to play basketball and soccer, while he grew up playing baseball and football, along with club volleyball in college. He spends his time away from the hospital trailing after his boys to soccer games, he said. Now that he is also enrolled in an MBA program, there’s little time for anything else.

The attraction to neuro started when he was in high school and his younger sister was diagnosed with arteriovenous malformation, a tangle of abnormal blood vessels in the brain, requiring surgery.

His sister’s illness “had a big impact on my exposure to medicine and to neurosurgery specifically,” he said.

But the family-centered care she received had a profound impact as well. And that culture of caring was something he knew he could find at Riley.

Dr. Jea was born in New Jersey, but grew up in Miami, where he was surrounded by many cousins close in age. He attended med school at the University of Miami School of Medicine and did his residency at the university’s Jackson Memorial Medical Center. He then completed a fellowship at the Hospital for Sick Children in Toronto before going to Houston.

Coming to Indianapolis three years ago was a culture shock – in a good way, he said.

“Moving here, we were struck by how nice people are,” he said. “Hoosier hospitality is absolutely real.”

Dr. Jea said he looks forward to coming into work every morning – first to see his team, which includes four other surgeons, four nurse practitioners and 10 office staff, and then to see his patients.

And while he came to Riley for the opportunity to lead a major program in a top-notch pediatric hospital, he wants more for this hospital’s neurosurgery program. The infrastructure is in place, he said. And the team is ready to show what it can do.

“Our vision is to be a top 10 pediatric neurosurgery program in the country,” he said, as measured by U.S. News & World Report’s Best Children’s Hospitals report or similar rankings.

The most recent report ranks Riley’s program at No. 24, up from about 40th three years ago, Dr. Jea said. “We’re rising very quickly.”

A lot of that improvement is based on the wider range of procedures available at the hospital.

“There is not a single pediatric neurosurgery service or procedure that we don’t do here. And that’s all because of my colleagues. Our vision is to continue to be a top-notch program through clinical, education, research and faculty development.” 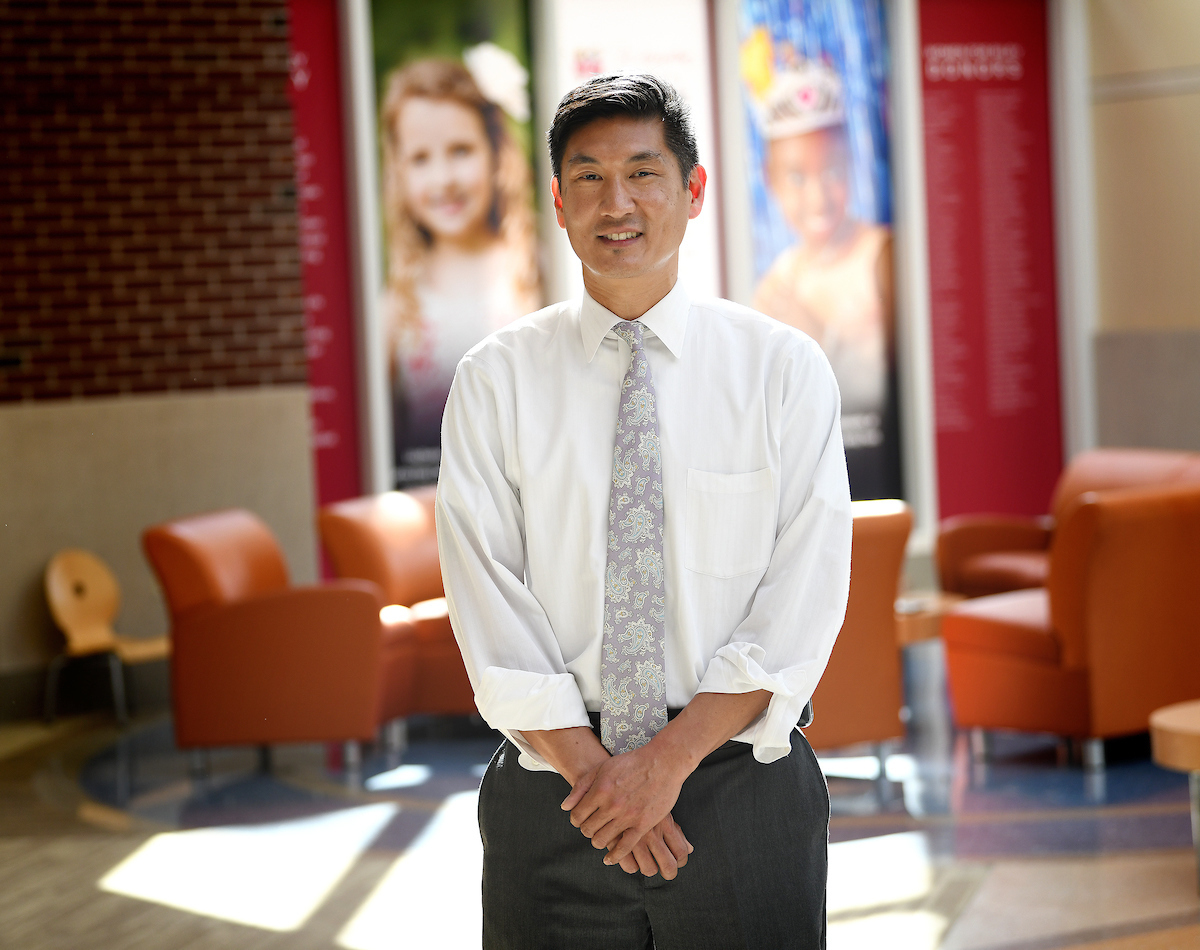 In the end, he said, “We want to be a national and international destination for infants, children and adolescents with pediatric neurosurgical problems right here in Indianapolis.”

The three pillars the department is focused on currently are improved treatments for epilepsy, neuro-oncology (brain tumors) and fetal neurosurgery.

Already, Dr. Jeffrey Raskin is performing life-changing surgeries including hemispherectomies (a rare procedure in which half of the brain is removed to control severe debilitating seizures), as well as minimally invasive epilepsy surgeries with maximum impact, Dr. Jea said.

In those minimally invasive surgeries, targeted laser fibers are delivered into the brain to ablate, or burn away, the nerve cells causing the seizures.

“All these kids that go for surgery have intractable epilepsy, meaning they failed medical treatment previously,” he explained.

In the area of fetal neurosurgery, he said once the department has a fetal surgeon to open and close the womb to keep a pregnancy viable, the team will be ready to fix certain birth defects including spina bifida in fetuses.

Dr. Jea also is excited about the day when incision-less surgery will be available. A trial is currently going on that could change the way epilepsy and brain tumors are treated in children, using high-intensity ultrasound waves that go through the skull.

“It’s still surgery but without the blood loss and without a disfiguring scar,” he said.

Stem cell therapy and its potential to treat traumatic brain injuries and spinal cord injuries – to regenerate the nervous system – is more cutting-edge technology around the corner, he said.

The future of care is exciting, but Dr. Jea’s focus remains on the patients and their families who come to Riley for help and hope.

“I hope that the message that my patients get after meeting me is that I try very hard to earn the privilege to help.”