Riley saved her mom’s life, so now it’s her turn

Rachel Boyer is a farm girl at heart, but her passion for nursing is rooted in a calling to serve others. When the call went out for volunteers to redeploy to Methodist last spring as the COVID patient population increased, she stepped forward. 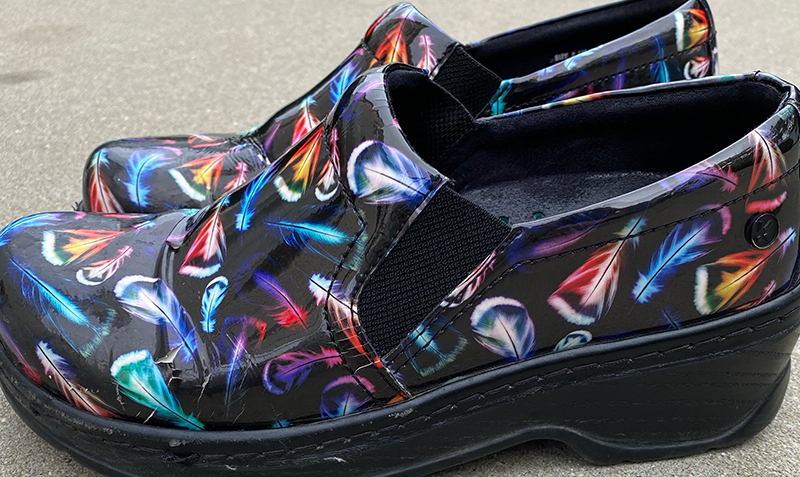 With her colorful clogs, the bling on her badge and the Mickey Mouse lanyard around her neck, it’s clear that Rachel Boyer has found a home at Riley Hospital for Children at IU Health.

A nurse on 8 West for five years – including two years as a student nurse – Boyer has had her sights set on Riley since she was a little girl.

“My mom will tell you all I ever wanted to be was a nurse and to work at Riley,” Boyer says with a laugh.

In fact, her mom said just that when reached by phone.

Lori Need can’t remember a time when her daughter dreamed of anything else. She comes by it naturally. Boyer’s father is a firefighter, and her grandmother was a nurse. Serving others runs in the family.

“So I grew up with two people who were always sharing really cool stories,” Boyer said. “I like that and I want to help people.” 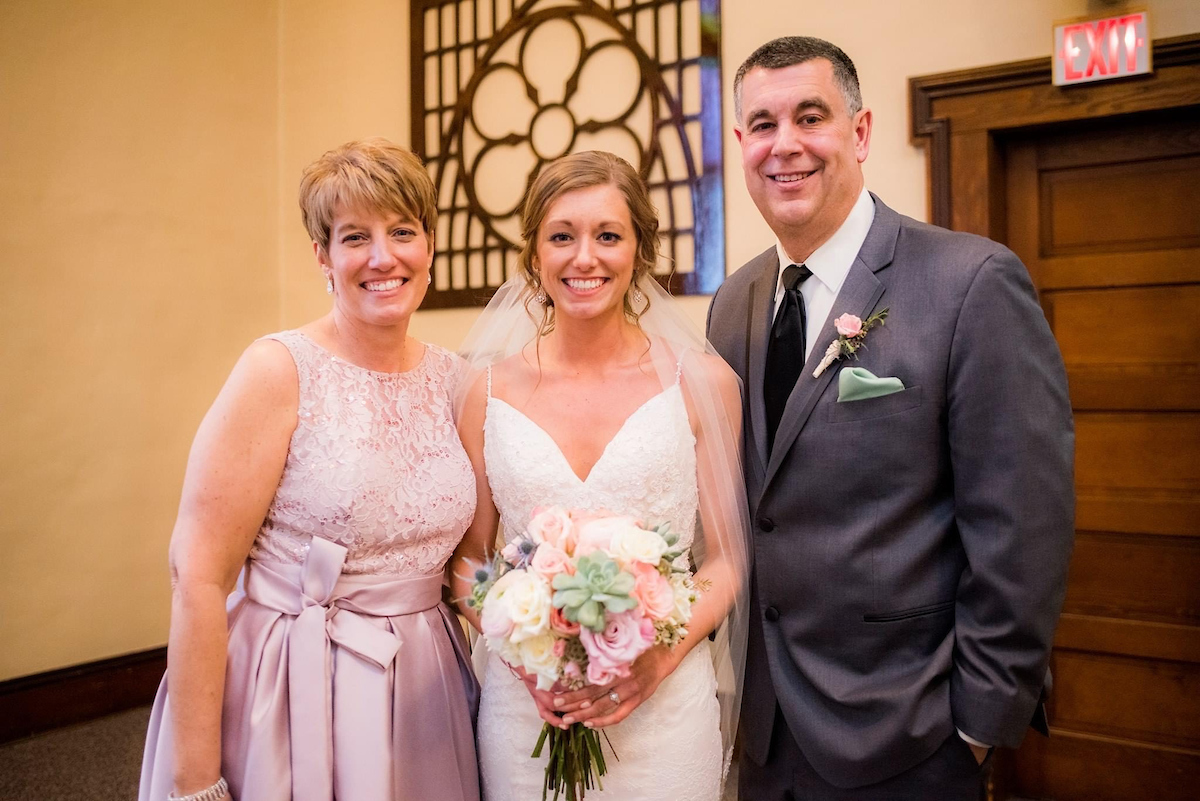 Riley has always been close to her heart because the hospital saved her mom’s life more than a half-century ago.

Need had heart surgery at Riley for narrowing of the aorta when she was just 3 weeks old, then again at the age of 8. Dr. Harold King, who passed away in 2016, was her surgeon. Dr. King joined the Riley surgical team in the 1950s and served as director of cardio-thoracic surgery at Riley from 1971 until his retirement in 1990.

Boyer brought her mom back to the hospital a couple of years ago, and the older woman didn’t even recognize the expanded campus, but Need knew her daughter was in the right place.

“It’s a calling,” Need said. “Knowing my story and how important the doctors and nurses were in saving me I think made an impact on her. She is just meant to be a nurse.”

The multiple Red Shoe and Daisy pins on Boyer’s badge are just a hint of the mark she has made at Riley in her first few years on the job.

While her career might have seemed preordained, it was a three-month study-abroad trip to Africa during nursing school that sealed her future.

She says she grew in her faith and in her passion for nursing while caring for people in Zambia. 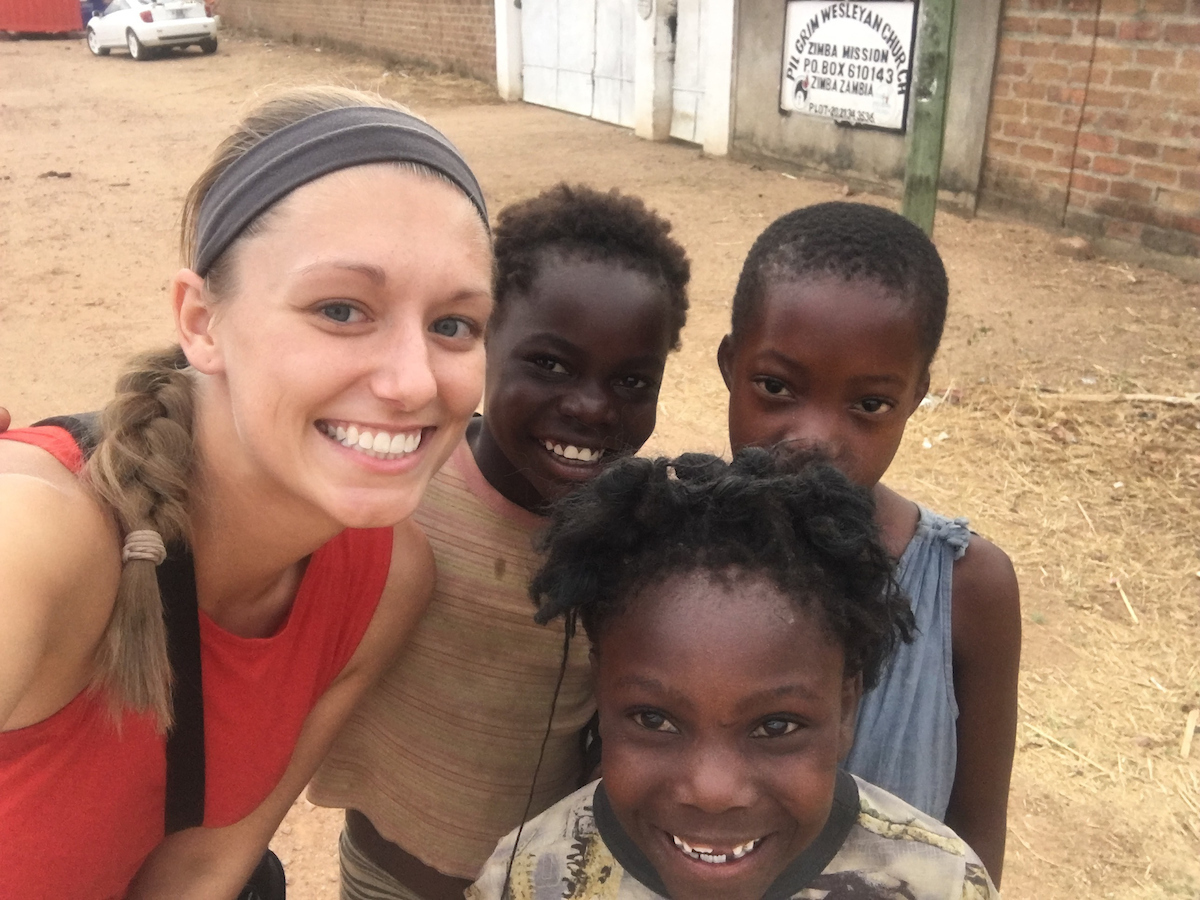 “It was absolutely amazing and changed my life in so many ways. The students were the nurses on the night shift – passing meds, delivering babies, scrubbing into surgeries – it really gave me confidence in my nursing skills and made me a lot happier as a person.”

But the biggest way she grew was spiritually, she said. “I learned to trust God.”

It was that trust that allowed her to step forward last spring when IU Health was seeking volunteers from Riley to redeploy to adult hospitals as the COVID-19 crisis first hit hospital doors.

She redeployed to IU Health Methodist Hospital’s cardiac progressive care unit, which was preparing to accept COVID-positive patients before eventually transitioning back to its regular patient population.

“I went there thinking I was going to be caring for COVID patients; that’s what we signed up for,” Boyer said, matter-of-factly.

Not that it was easy. Transitioning from pediatric patient care to the adult world is hard, and the idea of caring for seriously ill patients suffering from a highly contagious, deadly disease was frightening.

But Boyer believed her faith left her no choice.

“I’m blessed that I’m healthy and have no co-morbidities that I’m aware of. I knew that Riley’s census had dropped and people needed their hours, so I knew that I should probably do something,” she said. “The fear of COVID was really huge back in March. Everyone was terrified. I just felt this nudge that I needed to go to Methodist and take care of COVID patients if that’s where they placed me.”

Her family wasn’t a bit surprised. 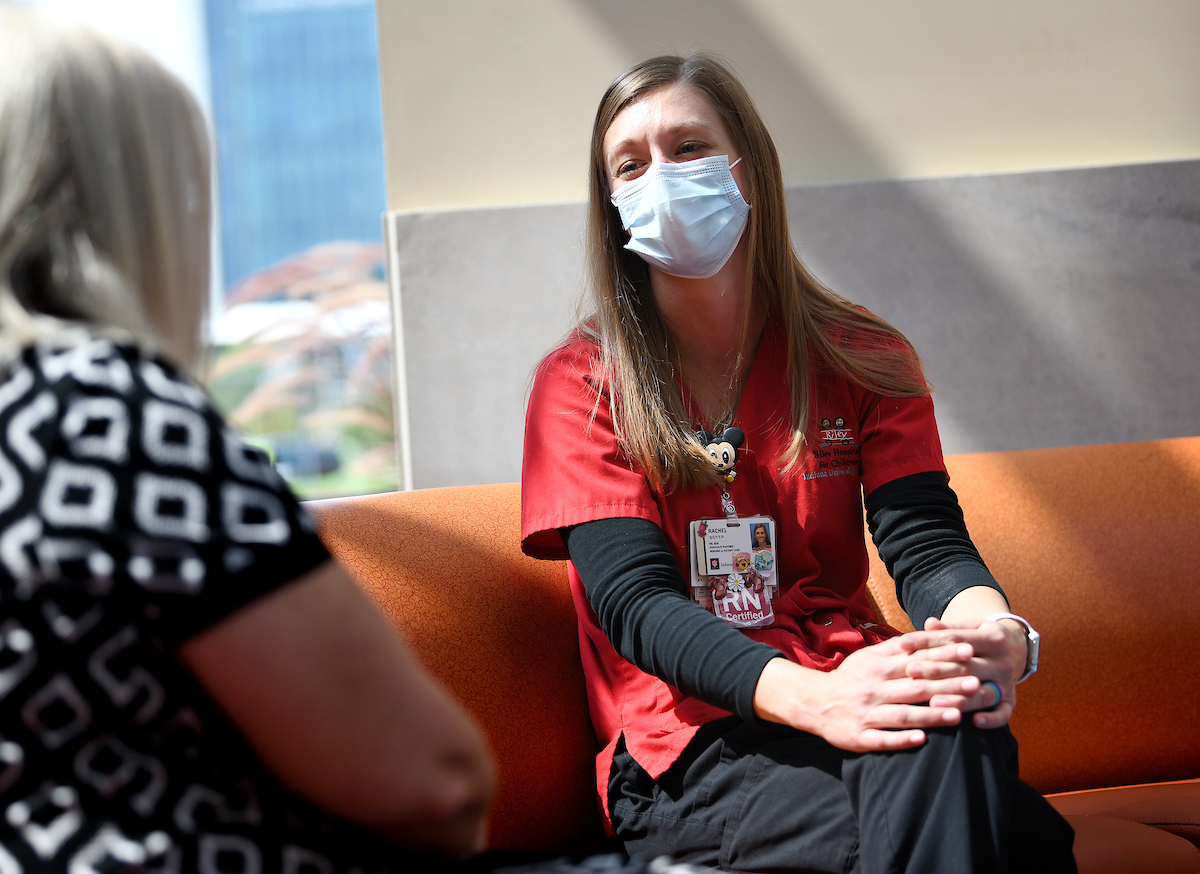 “When you sign up to help someone, you take the risk with it,” said Boyer’s mom, wife of a firefighter. “You protect yourself, you do everything you can, but when it’s something that’s on your heart to do, you just do. You go.”

So Boyer went. For five weeks back in April and May, she worked at Methodist, caring for heart patients like they were her own family, like she would want someone to care for her.

When the call for volunteers to redeploy was made, Boyer didn’t hesitate, Phegley said, calling her friend “selfless and humble.”

SHE LOVES TO LEARN

What may have surprised Boyer was how much she enjoyed her time in the adult world. So much so that she now works a shift at Methodist every other week, on the same unit where she redeployed last spring.

Calling herself a “nerd,” who has started re-reading her freshman year anatomy and physiology textbook, she says she doesn’t want to go back to school, but she craves knowledge. What better way to learn than by challenging herself, she figures.

“I don’t know where it’s all going to take me. If you would have told me in January that I’d be working at Methodist, I would have laughed in your face. But I’ve really enjoyed getting to learn about cardiology and how the adult medical system works.”

The self-described adventure-seeker dreams about maybe working as an IU Health LifeLine nurse someday, but she’s almost afraid to say that out loud. As a child, she remembers the thrill of seeing the LifeLine helicopter land at her high school in Rossville, Indiana, for an emergency transport, and thinking that would be an exciting job.

“I told myself when I was younger that I couldn’t do that, but now after going to Methodist, it made me think maybe I can.” 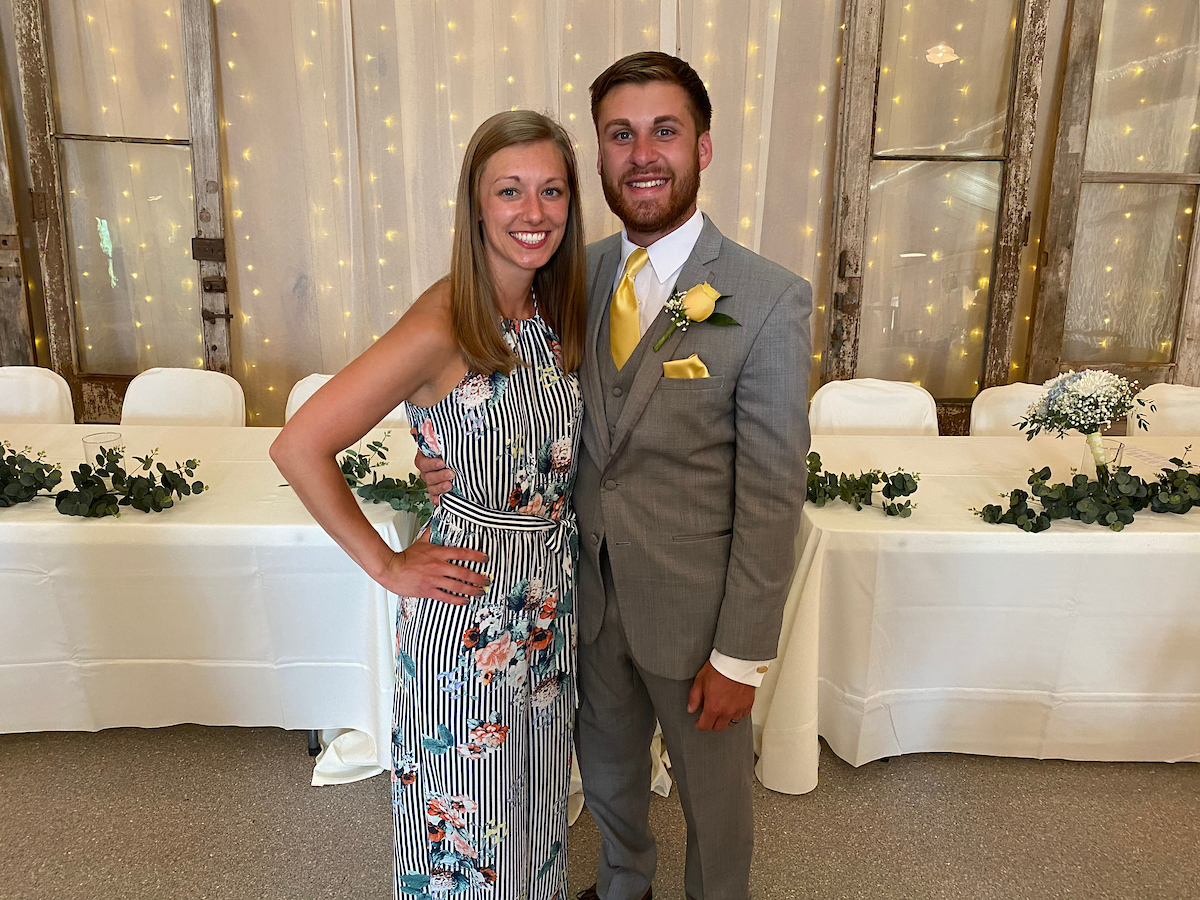 If she hadn’t decided to become a nurse, Boyer would have returned to her roots in farming. She grew up on her family’s farm and met the boy who would become the love of her life in 4-H. She and Brandon Boyer began dating in college and married last year.

She still loves agriculture and was able to get her farming fix last season during fall harvest at her in-laws’ farm. In fact, she had a moment of indecision last fall during that harvest.

“I think everyone has a moment where they wonder if they made the right career choice,” she said. “Should I have gone into agriculture? I started questioning everything. And then COVID hit. For most people, that would have been a sign to get out. But for me it was a sign to jump in with both feet. It was like a fire lit under me.”

As the coronavirus tightens its grip on the healthcare system yet again, Boyer stands ready to help in whatever way she can. She counts on her faith to speak louder than her fear.

“I’m not reckless, I follow procedures,” she said, reminding people to wear a mask and social distance. “And I understand I can get sick. But these people need to be taken care of. If I contracted COVID or anyone in my family did, I wouldn’t want people to be scared to come into contact with us. I would want someone to provide love and care without showing they’re fearful, so I want to be that person for patients.”