Riley Patient, 16, Is Singing His Way Through Bone Cancer

Austin Hewitt was lying in bed, having just finished yet another round of chemotherapy when it hit him. He should write a song about this journey. He called it "The Twelve Days of Chemo."

This is Austin Hewitt's life. Port accesses and blood transfusions. Cups of pills and saline bags.

He's 16 with bone cancer. Six rounds of chemotherapy are behind him. An amputation is in front of him. Then, months more of chemo into next summer.

But this is not his life. Not if you ask Austin. His life is music and dance. He was barely old enough to toddle around when he started belting out songs and dancing. His family called him Elvis, the way he swiveled his little hips.

He's been in more civic theatre performances than can be counted. He made the elite show choir as a freshman, a rare feat, at his Eastern High School in Greentown. He wants to go to college to become a choir director at a school. He has dreams. Big, enormous dreams.

Right now, those big dreams are on hold. Austin is focusing on the little dreams.

The day after prom in April, Austin noticed a sore on his big toe. He thought he must have stubbed it or someone might have stepped on it during the night of dancing. But the sore didn't go away. It swelled.

A doctor diagnosed him with gout and put him on medicine. After no improvement and with Austin in dire pain, he was sent for an MRI and then a biopsy.

His mom, Tonya Hewitt, got the call just before Labor Day. Her son's swollen toe was a rare form of bone cancer, Ewing Sarcoma, and the road ahead would not be easy.

Just days later, on his 16th birthday in September, Austin was at Riley Hospital for Children at IU Health getting his chemo port put in and having a bone marrow biopsy. He's spent countless days sick in his hospital bed, nauseous and weak. He has had setbacks and been in intensive care.

Through it all, his music and show choir group, Encore Singers, has kept him going.

"Big, big support," Austin said. "This group has been my backbone. They've really just kept me together and held me together."

Inside the high school choir room, Austin's spot has been left empty so members will remember to think of him when he can't be there, said Karol Evenson, choir director at Eastern.

The kids have rallied around Austin, she said, every step of the way. And Austin has been there for the choir group, too.

"We've had to reschedule chemo just so he can be at the concerts," said Tonya Hewitt. "Because missing one? That's not an option for him."

Just weeks after starting chemo, Austin had a fall concert. Of course, no one expected him to be there.

"He was bound and determined he was going to sing and dance for that concert," said his grandma, Linda Flodder. "He shoved that tumor into a pair of dress shoes and he danced. And I cried through the whole thing."

Austin was smiling on stage, but Flodder knew he was in pain. He was dancing, but he had a limp. He was singing, but in the back of his mind was that terrible thought that kept popping up: "I have cancer."

Still, Austin was tackling one of those little dreams. Of performing in a concert. It's literally what "keeps him going," Flodder said. He was at his Christmas concert, too.

And when he has to be in the hospital, Austin still finds a way to keep music in his life.

Which is how another little dream of his just came true.

"This is his world," Tonya Hewitt said Friday as Austin stood inside the recording studio at Riley's Child Life Zone. 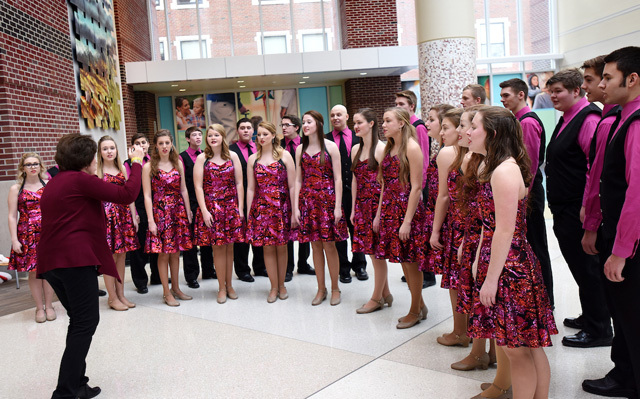 His world had come to his hospital, all 23 fellow show choir members and Evenson. They had arranged for a day of missed school to record a Christmas album with Austin. Then, they performed in the lobbies of Riley.

The whole idea was Austin's, said Caitlin Krater, his music therapist at Riley.

"He's the creative energy behind it," she said. "When he first was admitted, I heard from his medical team that this kid really loves music. It's the way he copes."

Austin has asked Krater to teach him piano while he's in the hospital. She knows when he's having a good day because her phone will ring and it will be Austin asking for another lesson.

And when Austin heard from Krater that Riley had a recording studio?

As they sang Friday, Austin was glowing, smiling and joking. His choir had rallied around him and were giving it their all.

Then, when all the songs had been recorded, Austin asked the choir to sing one final piece with him.

It was a new song -- a song that came to Austin as he was lying in bed, having just finished yet another round of chemotherapy. He couldn't sleep and an idea came to him. He should write a song about this journey that he never really wanted to be on. The journey of bone cancer.

He called it "The Twelve Days of Chemo" and he infused it with humor, topics such as perky nurses and food trays. He also revealed the serious side of cancer, things like ports and cups of pills.

As the choir sang that song Friday, they didn't do it sadly. They did it joyfully, as Austin smiled.

Dr. Karen West became the first female surgeon at Riley at IU Health 31 years ago. “It was a...

For pediatric patients and their families, the weight of an unexpected medical diagnosis can be...

But the time the IndyCar driver spent with the kids Tuesday meant even more.