Riley Occupational Therapist: ‘It’s Amazing To Just Watch What These Kids Can Do’

If she thinks about it, for just a few seconds, Kirsten Bovee starts to smile -- just thinking about the amazing wonder she gets to see.

The teenage girl with cerebral palsy, who after months of therapy, learns to get dressed without any help. The toddler with autism who masters clapping to the beat of a song. The boy born without a hand, who just wants to tie his own basketball shoes – and he does. Then, he throws a ball through the hoop.

“They come in and they can’t do it. And then, they do,” says Bovee. “It’s amazing to just watch what these kids can do.”

There are plenty of medical marvels inside hospitals. But occupational therapy is a place where hundreds of tiny marvels happen each day.

As team leader of the occupational therapists at Riley Hospital for Children at IU Health, Bovee gets to see plenty of them.

She assesses each child who comes to her department and prioritizes when they will be seen by a therapist. She works with a team of 25 to schedule and hear progress of patients. She even fills in as occupational therapist when an extra hand is needed. 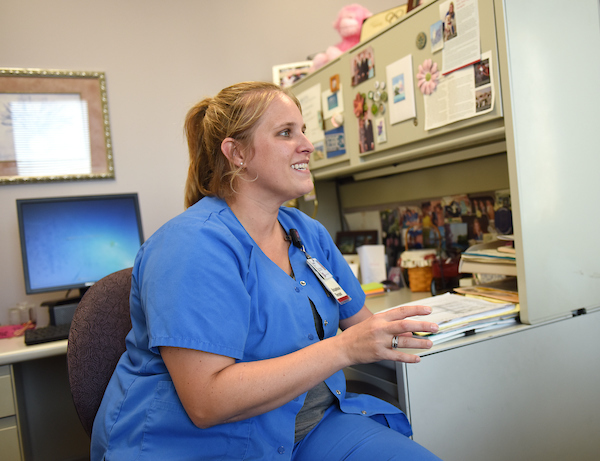 All the while, Bovee stands out inside the halls of Riley – for her compassion and her kindness. As she sits in an office next to a colorful room filled with therapy equipment, toys and games, Bovee’s love for her job is evident.

She is, after all, doing exactly what she dreamed of as a teenage girl.

Bovee was a junior in high school in Crown Point, Ind., playing soccer and on the track team when she had a talk with her dad about her future career. Bovee wanted to work with kids, she told him. Maybe be a teacher.

Bovee was born without her left arm, the result of amniotic band syndrome. The condition occurs when bands of fibers form in the amniotic sac and, essentially, cut off circulation to growing limbs.

Most days at Riley, Bovee works without a prosthetic arm. She’s never really gotten used to wearing one. She never really liked the feel of it.

Bovee remembers the mornings at home getting ready for first grade. Her mom would have her put on her prosthetic arm and send her off to school. When Bovee arrived, she would promptly take it off.

The school nurse would call her mom to let her know. Eventually, Bovee won that battle.

She doesn’t remember being treated any differently by the kids at school. One time, in third grade, a boy made fun of her. The teacher caught wind of it, took him out into the hallway, and it never happened again.

The kids at Riley sometimes take a bit to warm up to Bovee. They notice she doesn’t have a lower left arm. But it doesn’t take them long.

In fact, they get so used to it that they forget there is anything different. Bovee will be showing a child how to clap – for her that’s taking her right hand to her left elbow -- and the patient will clap that way, too.

“No. No,” she’ll smile and tell them. “You have two hands. Clap with your hands.”

It took Bovee just four years at the University of Southern Indiana to earn her master’s of science degree. As a student, she did a clinical at Texas Children’s Hospital in the neonatal intensive care unit.

When Bovee graduated in 2009, she applied at every children’s hospital in the United States that had an occupational therapy opening. Riley didn’t have an opening at the time.

Bovee landed a job in the outpatient clinic of Children’s Hospital of the King’s Daughters in Virginia. She stayed there until May of 2015, when she landed the job of team leader at Riley.

“I love watching the progress of the children,” she says. “I love being able to form those bonds.” 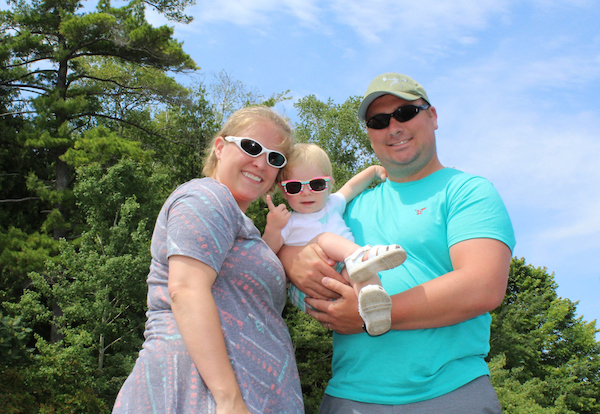 Personal: Bovee and husband, Jeremy, are parents to 13-month-old Madelyn. They also have Carley, a 5-year-old German shorthaired pointer.

Outside of Riley: She loves spending time with her family and going on walks and hikes with Carley. She and Jeremy are active in Cross Fit and in training for an upcoming competition. She also loves hanging out with her parents and three siblings and going to Indianapolis Colts games.