Rhea Watson was treated for leukemia as a teen; now she cares for patients fighting the same disease: “There are too many parents holding their children for the last time, crying goodbye as cancer takes them out of this world.”

Rhea Watson was born competitive. Her twin sister, Renee, came out of the womb first, and Rhea has been trying to make up for it ever since. She jostled for attention among three older siblings, and she always wanted to win on the softball field and in the gym.

She and her sister pushed each other to be better and to do better in everything.

So when it came to fighting for her life, Rhea gave it her all again – with her sister by her side – and claimed victory. 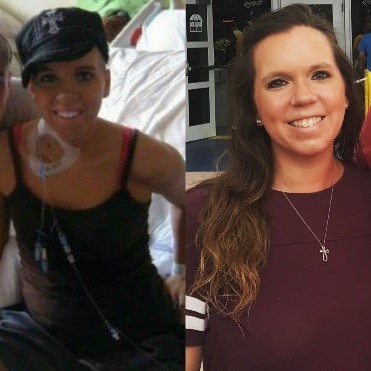 Diagnosed at 18 with acute lymphoblastic leukemia, she was treated first at Simon Cancer Center, then at Riley Hospital for Children at IU Health, and is closing in on her 10-year “cancerversary.” Her gratitude for celebrating this milestone has led her to another competition.

Rhea, 28, is a nurse in the Center for Pediatric Cancer and Blood Disorders at the Riley Outpatient Center. She is also a candidate for the Leukemia & Lymphoma Society’s Man & Woman of the Year campaign. It’s a fundraising effort that benefits people with blood-cancer disorders.

“There are too many parents holding their children for the last time, crying goodbye as cancer takes them out of this world,” she said.

When Sarah Amador, mother of a 7-year-old Riley patient who just finished treatment, asked if she could nominate her, Rhea didn’t hesitate.

“I was so excited and said yes right away.”

Amador said Rhea was one of her son’s nurses during his cancer journey, and when she learned that Rhea was a survivor, “it was a huge weight off my shoulders.”

Her son, Maddox, was diagnosed at 3. “Three-year-olds don’t have the words to tell you how they’re feeling, and we had never experienced anything like this before,” Amador said. “Rhea graciously allowed me into her personal experience. It was very emotional for me to be able to talk with a survivor who knew my son too. She helped me as a mom navigate something I didn’t have the skills for – I didn’t have those experiences.” 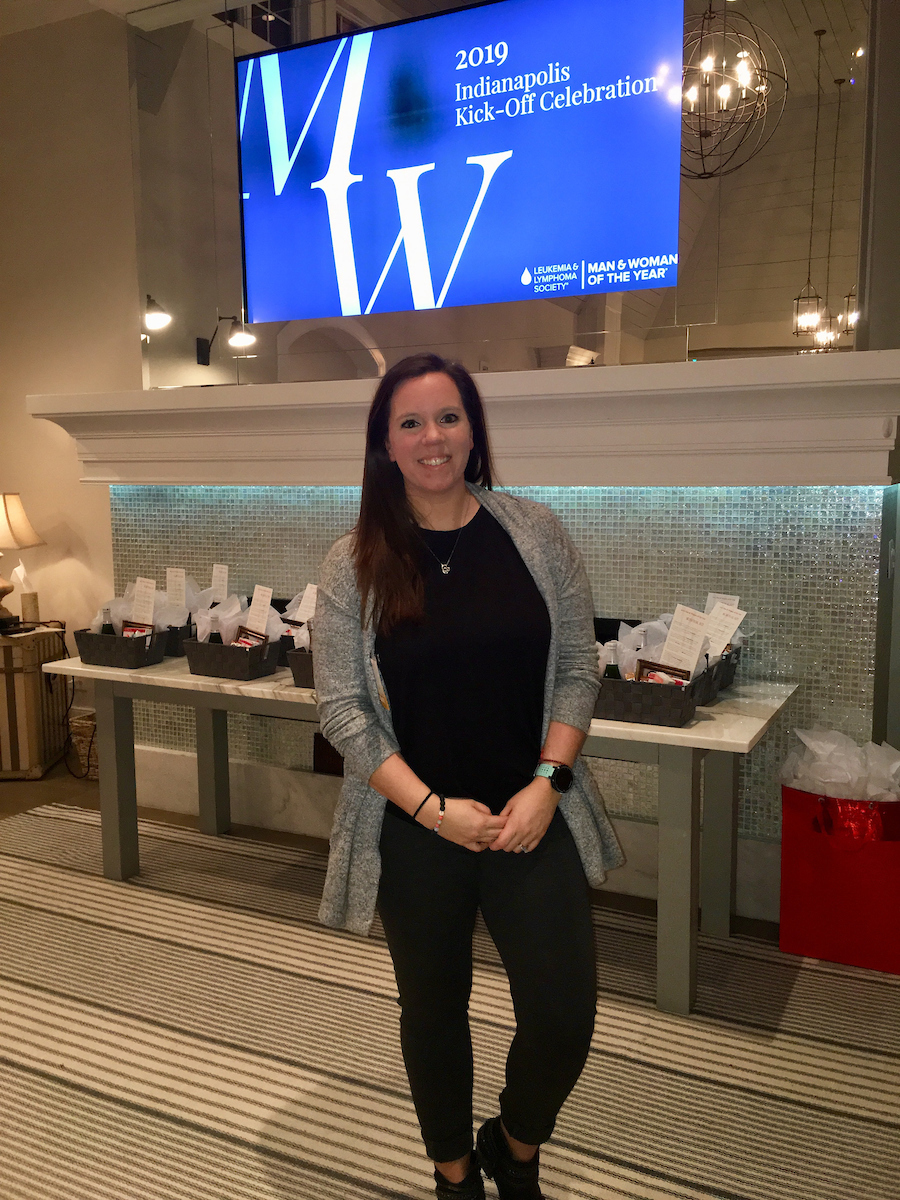 The Indianapolis campaign, which kicked off March 6, has Rhea going up against 14 other nominees from around the city. Most are not in the healthcare field like she is.

“Some people have a connection to the cause, and some people are just really good at raising money and want to be part of a philanthropic campaign,” she said.

Her connection is more personal than most, a fact that she hopes might give her an edge in the contest. The “winner” will be crowned in a gala at the JW Marriott on May 18.

Leading up to that night, Rhea and her team of supporters will host a series of events, including an informational night at Taxman Brewing in Bargersville on March 16 (tickets are $10), an NCAA bracket tournament, a trivia night and a Kentucky Derby party. Her goal is to raise $75,000.

“I keep telling myself it does not matter how much money I raise in the end,” she said. “I want to win, but all the money is going to LLS for research and to provide support to patients.”

Amador and her family hope to be at as many events as possible to support Rhea. “I think anyone who hears her story would want to support her,” she said.

Rhea was two weeks away from graduation at Center Grove High School when she found herself hospitalized for treatment of leukemia. She struggled to make sense of it.

“Your whole world has suddenly changed. You were just playing softball and now you’re dealing with cancer at 18.”

Even though she was in the hospital on graduation day, she walked across the stage virtually to collect her diploma.

“My sister and I Skyped each other and when they called our names to walk across the stage, she walked me on a laptop across the stage with her. It was one of the coolest moments.”

And the thunderous applause brought her to tears.

“The amount of support I had from the community was overwhelming.”

She spent a month in the hospital, then continued outpatient treatment for two-and-a-half years. During that time, she took online classes in business management at IUPUI. Along the way, she had an epiphany that changed her career path.

“The longer I came to Riley and the more I interacted with my nurses, the more I knew this is where I needed to be,” she said. 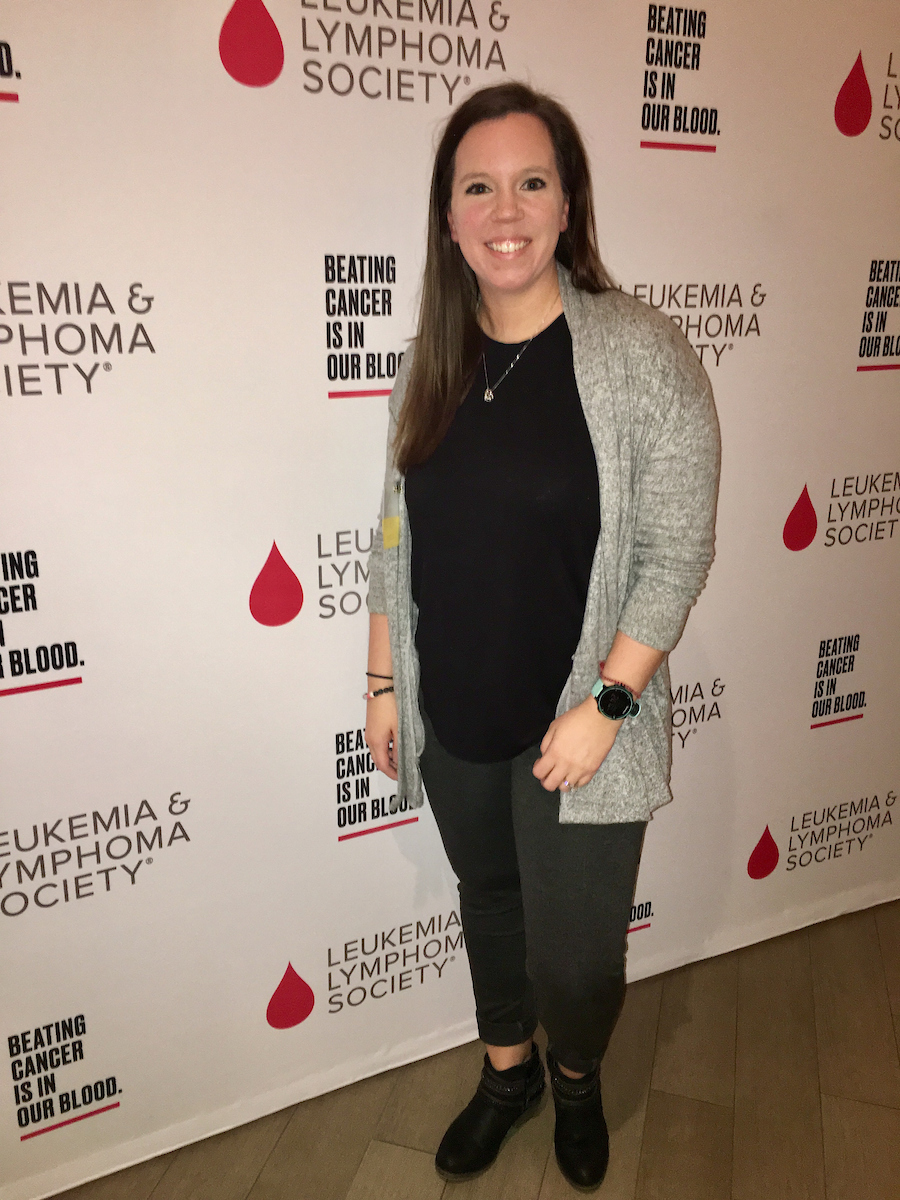 She switched majors, graduating in 2015, and immediately started working on 5W – the hospital’s hematology/oncology unit. After more than a year there, she made another move – to the outpatient center.

“I was treated mostly outpatient. That’s why it was in my heart to come here,” she said. “It was already my second home, and I wanted to be able to talk and connect with kids in the same situation that I had faced not too long ago.”

Rhea, who lives with her husband, Zach, and dog, Nala, in Bargersville, recently took on another challenge as a coordinator of Riley’s new adolescent/young adult cancer program. She spends two days a week working to launch that initiative and the rest of the week in the infusion center at the ROC.

Her own cancer journey changed the trajectory of her life, personally and professionally.

“It made me so thankful for the supportive family I have. It strengthened my relationship with my parents and my twin. I literally don’t know how I would do life without her. She is the other half of me. God knew what he was doing when he gave me Renee as my twin.”

Find out more about the campaign here. You can also visit her Instagram page at @rheaforwoty.