Kathleen Theisen can’t imagine being anywhere else, except beside those babies inside the NICU.

The resilience of those tiny babies. It’s remarkable every single time.

There they are, hanging on to life. Dependent on those big bodies, those medical people, swarming around them, fighting for them.

Yet they, too, are fighting with everything they have. Those babies, some weighing as little as 400 grams, not even a pound, are little warriors. 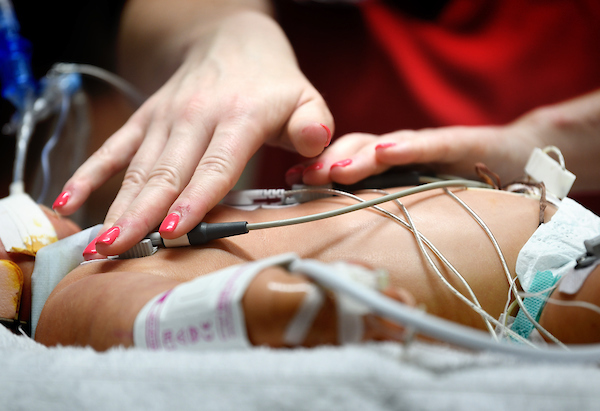 “It’s just amazing to see what they endure and how they can recover,” says Kathleen Theisen, a nurse in the neonatal intensive care unit at Riley Hospital for Children at IU Health. “That’s what’s amazing about my job. That’s what makes you come back.”

Theisen can’t imagine being anywhere else, except beside those babies inside the NICU.

As a nightshift nurse, she is there when darkness falls, saving tiny lives.

“If you would have told me at the beginning of my nursing school I would be at Riley, I wouldn’t have believed it,” she says. “I’ve always wanted to do this. This is where I wanted to be.”

That passion started when Theisen was in college at Xavier University, majoring in psychology.

There were triplets born in her neighborhood back home in Noblesville. They spent time in the NICU. Theisen babysat them from the very beginning.

“I was in awe of how little they were,” she says. “It was just incredible.”

After graduating with her psychology degree in 2013, Theisen went immediately into an accelerated nursing program at Xavier.

In 2015, she graduated with a master’s degree in nursing. By August, she had landed a job in the Riley NICU.

“We take care of the sickest babies in Indiana,” she says. 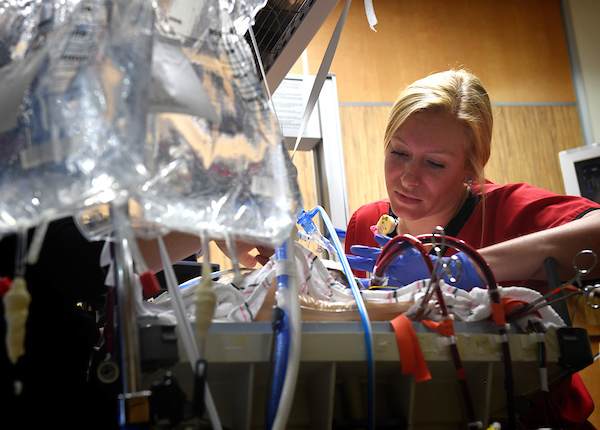 On this night inside Riley, Theisen is with little Charlie. He is very sick, living minute to minute.

Charlie is just three days old, born with severe complications and on ECMO – extracorporeal membrane oxygenation. ECMO lets his heart and lungs rest. So that he can survive.

Theisen and another nurse spend the night monitoring little Charlie, making changes to his medications, emptying fluids that pass through his body, reading EKG results, checking the ECMO machine. They want to keep him well sedated. They want his stress level as low as possible.

Many people don’t realize exactly what the NICU is, says Theisen. They think it’s a place where nurses cradle and feed babies. But inside the NICU are critically-ill babies.

Those who work with Theisen say she is one of the best to care for the sickest of those little ones.

“This is the most stressful time of their entire life,” says Theisen.

It’s important to make sure they realize things are critical, she says, but to also give them hope, to keep things looking toward the future.

“I’m always looking at the positives and the little strides,” Theisen says. “The smallest things matter because those lead to the big things.” 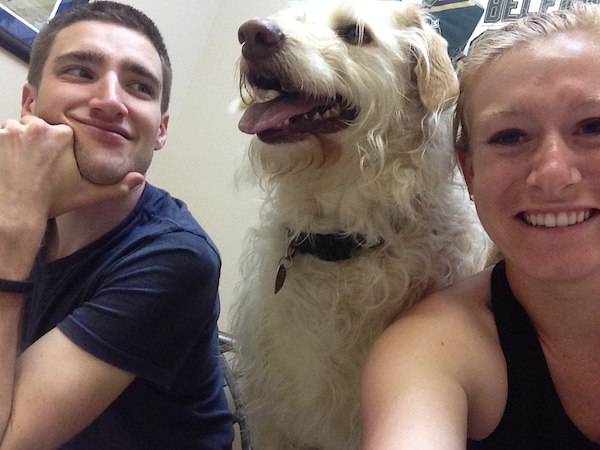 Outside of Riley: She is a Pure Barre enthusiast, working part time at the Fishers location. She loves to hang out with her boyfriend, RJ, a fourth year dental student, and her dog, Lola.

Memorable patient: Theisen took care of a baby girl, born at 26 weeks gestation, for six months in Riley’s NICU. She worked overtime to be there for that baby girl. Now, that little girl is 2 years old. Theisen often visits her and her family and sometimes babysits. “She’s like my little miracle baby,” Theisen says.

You might not know: She played Division I soccer at Xavier University. Her whole family went to Xavier. Her dad now works for the university and the family goes to all of the school’s home games.

Life changing event: Theisen and her younger brother, Patrick, are just 15 months apart and very close. After he was recently diagnosed with Non-Hodgkin lymphoma, it turned her world upside down. Out of his diagnosis, though, Theisen has examined even more closely her role. “All this changed my perception of how to be a nurse,” she says. “It really makes things real and makes you think about everything. I think it made me better.”