She says she remembers being thrown from the vehicle in the violent collision.

The next thing she remembers is the sound of music as she began her long journey of healing at Riley Hospital for Children.

Naomi Greenwood, 12, suffered serious injuries in the crash, which happened on Father’s Day this year in northern Indiana. 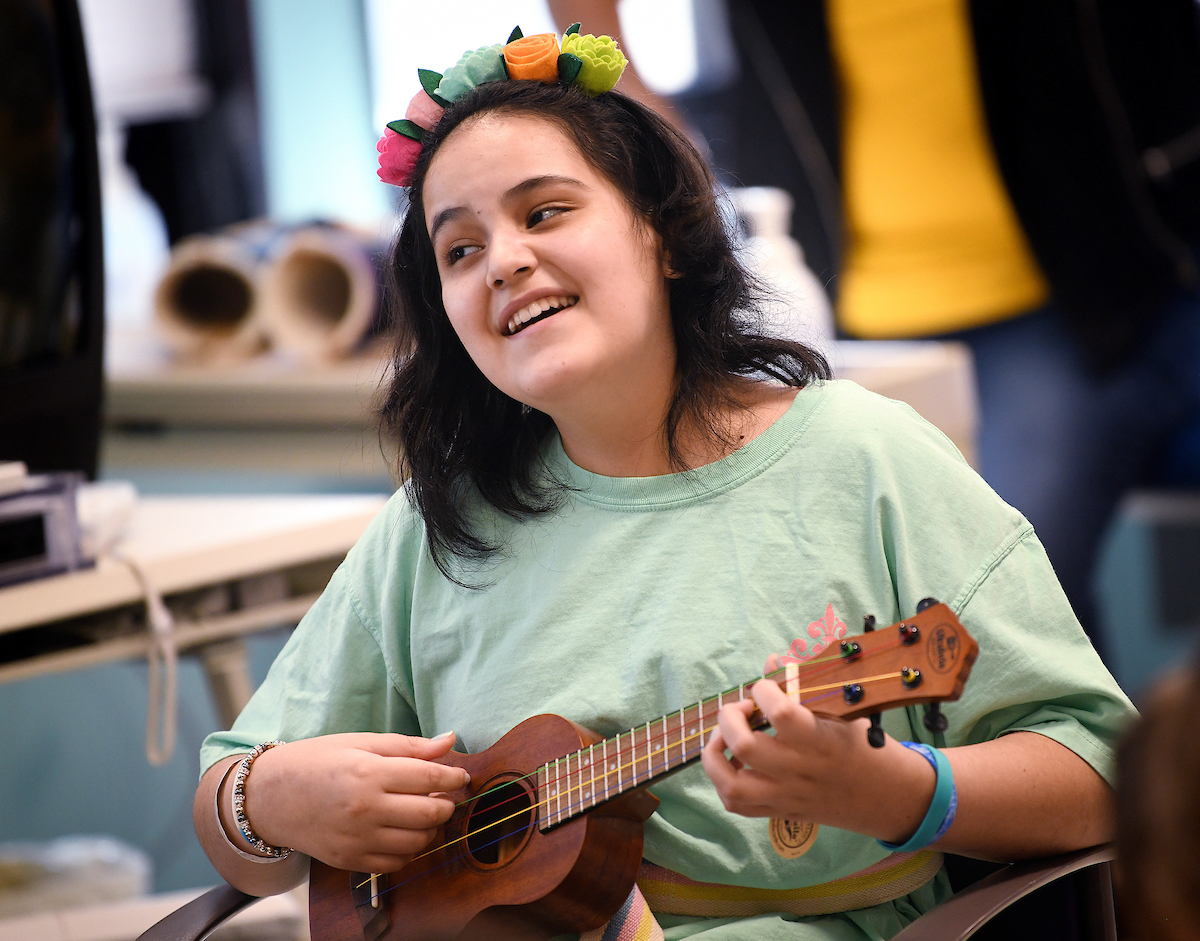 She was riding in an older vehicle with a lap belt but no shoulder belt when the van collided with another vehicle in an intersection. Naomi was ejected, struck a guardrail and landed in tall grass, her mother said. At first, emergency responders didn’t see her. When they found her, she didn’t have a pulse, but they were able to revive her.

All of that is history now, but the music that helped bring her back will continue to carry her forward.

To look at her now, you would be amazed. She is amazed herself.

“Yes! I am walking without the walker. I’m still doing great and I’m remembering things,” she said. “I know I had a head injury and I went out of the car and I survived!”

She is bright, polite, thoughtful and kind. She adores her mother, Susie Mendoza Savick, and father, J.C. Greenwood, and can’t wait to get back home to Plymouth, Indiana, where she will be reunited with her sister and her two dogs, Gucci and Fluffy. “They make me happy every day.”

Naomi’s three months at Riley were filled with hard work and more than a little suffering. But she has nothing but good things to say about her nurses, her doctors and her therapists, including music therapy fellow Joshua Frey.

“Josh helped me, all the people at Riley helped me,” she said, “and I’m not giving up.” 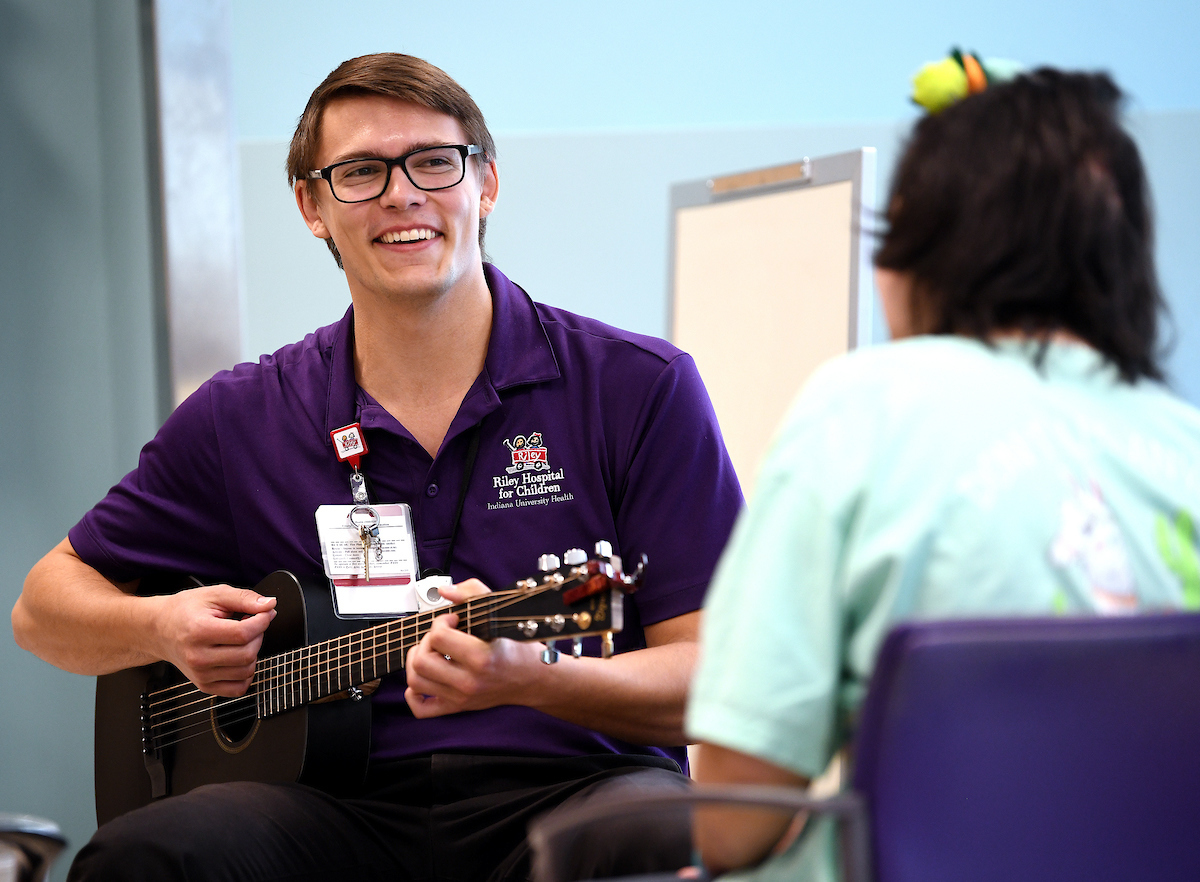 Frey started his fellowship at Riley in late May, so he has worked with Naomi since she arrived at Riley in June, after two weeks at a hospital in South Bend.

MUSIC WAS THE KEY

Naomi’s mom remembers Frey coming up to the ninth floor when her unconscious daughter was being treated for a traumatic brain injury, a broken leg and other serious injuries.

“She was shaking, she wasn’t responding to anything, and he played music,” Savick said. “The music stimulated her. He got a reaction from Naomi by playing one of her favorite songs.”

That was just the beginning.

The two began working together regularly, and Naomi slowly recovered her speech and her ability to walk, thanks to the support of physical, occupational and speech therapists. She began participating in weekly rehab group sessions with Frey and other patients, making music and making friends.

One little boy who had trouble with her name called her “My homie” repeatedly, but she loves him and the group just the same.

“It’s my favorite thing,” she said. “I love singing with the kids and making their day. It makes my day, too.”

She has taken on the role of encourager and cheerleader in the group, offering words of support to each child, as they sing, try out instruments, move to the beat of the Chicken Dance and toss a ball back and forth. “You got this,” she says.

“Group gives them a chance to make music with each other while addressing rehab goals,” Frey said. “For music therapy, there are so many different things to do. For kids who can play, I try to teach.”

GIFT OF A UKULELE 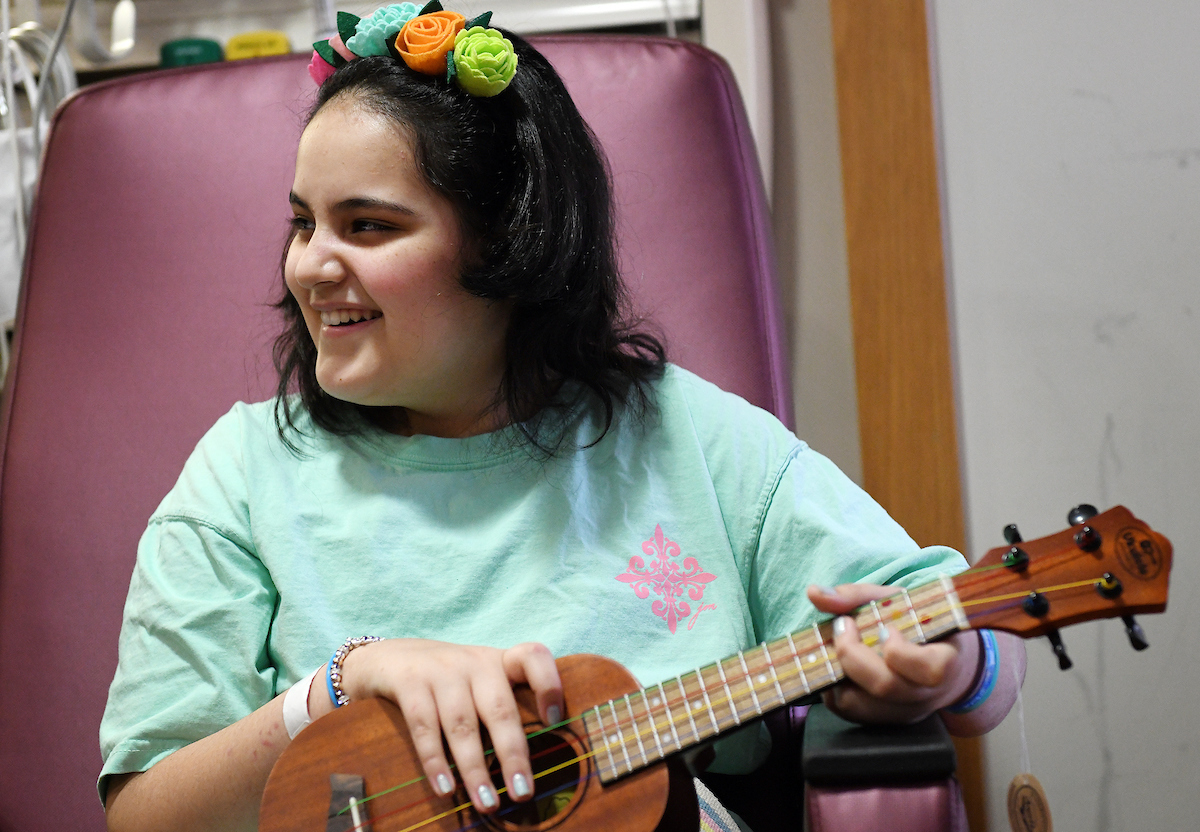 Frey found an eager student in Naomi, so he presented her with a special gift just before she left the hospital last week. It’s a ukulele from the Ukelele Kids Club, a nonprofit founded by a man who wanted to connect with children’s hospitals after losing his son. After noticing the impact music had on kids and families, he began donating ukuleles to hospitals, thousands of them over time.

In fact, the Ukulele Kids Club funds half of Frey’s salary, while the Riley Cheer Guild pays the other half.

When Frey asked Naomi if she would like a ukulele, “she just lit up,” he said, so he retrieved one from his office and presented it to her, taking the time to teach her a few chords to get her started.

Gestures like that mean the world to Naomi’s parents, who are thankful to the Riley team for bringing their daughter back to them.

“They really, really care,” Savick said. “My child had deficits in the beginning, but they always had a sense of hope that she would overcome.”

And so she has.

While these past few months have been challenging in ways they never imagined, seeing their daughter laughing, talking about her dreams and strumming her new ukulele brings them both to tears.

“All I want to do is help other people because I just realized how much people helped me,” she said in a voice barely above a whisper.

Naomi has always been kind, but now she’s even more thoughtful, her mom said. An aggressive edge, perhaps learned on the basketball court, has softened, her dad said. And she’s let go of the anger she felt after the accident, she said, calling it “disrespectful.”

She has some short-term memory lapses, but she’s looking forward to going back to school and seeing her friends again. She will return to Riley for kidney surgery Oct. 11.

On the last day before she was discharged, Naomi got a chance to say goodbye to her friends in rehab group, after listening to Frey play and sing along to “Get Back Up Again” from the “Trolls” movie.

As the session wound down, Naomi waved goodbye to her friends, saying “You can get through this!”

Before leaving the rehab unit, she shot hoops in the corner with her dad, then turned to wrap him in a hug. The two danced for a few seconds to music still playing in Naomi’s head.

A tender moment between dad and daughter, and one J.C. Greenwood likely will never forget.

He looked at his girl and said, “She’s gonna be all right.”