Riley educator finds her joy in and out of the classroom

School Program manager advocates for her teachers and patients inside the hospital and in the community: “I love talking about our teachers, and I love advocating for our kids.”

Kristin Wikel was at a crossroads. Torn between continuing to work directly with patients as a teacher at Riley Hospital or moving into a management role with the Riley Hospital for Children School Program.

Her title today, manager of the Riley School Program, tells you what road she took, but getting there took some serious soul searching.

Wikel has been with the Riley School Program for 15 years, the first several at IU Health Methodist Hospital, which had a Riley inpatient rehab unit onsite until it moved over to Riley. She has a master’s in special education and will graduate in May with her director license in special ed from Ball State University. In the fall, the mother of three will start her doctoral program. 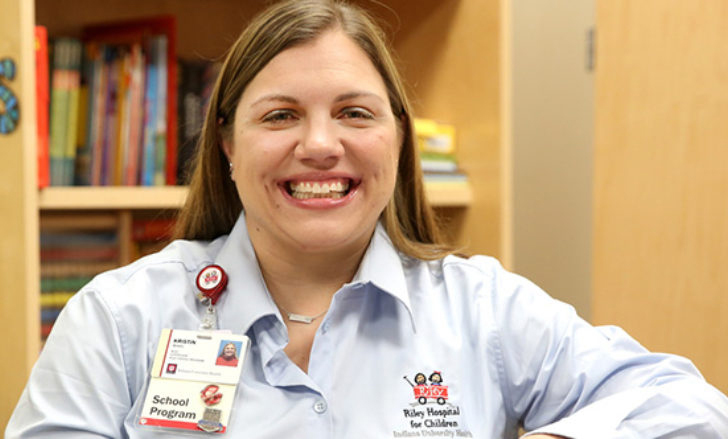 She didn’t have ambitions like that when she was a teacher, but that’s where the road she chose took her. When the previous school manager left, she was offered the job, but she resisted, saying, “My patients are my joy, how do I find my joy?”

For a few years, Wikel was able to straddle both worlds, working with patients in the burn unit on academics while also managing her staff of teachers, which at that time numbered five. But it couldn’t last. As the team and responsibilities grew, she needed to go all in as a manager.

It took a couple of heart-to-hearts with key people to help her see the value in her leadership role. And she has never looked back. She oversees a staff of 11 teachers and two student teachers in Riley’s kindergarten through 12th-grade program. Those teachers work with patients and siblings to tutor and bridge the gap between hospital and school.

She has embraced her new role, appreciating that she can have a bigger impact, but also savoring the individual successes – like the patient she worked with on the burn unit who was recently adopted by a team member. Those stories give her joy.

“I love it. I get to meet cool people and I get to tell the stories of the amazing work the teachers are doing. I love talking about our teachers, and I love advocating for our kids. I love the community support we get here because everyone loves Riley.” 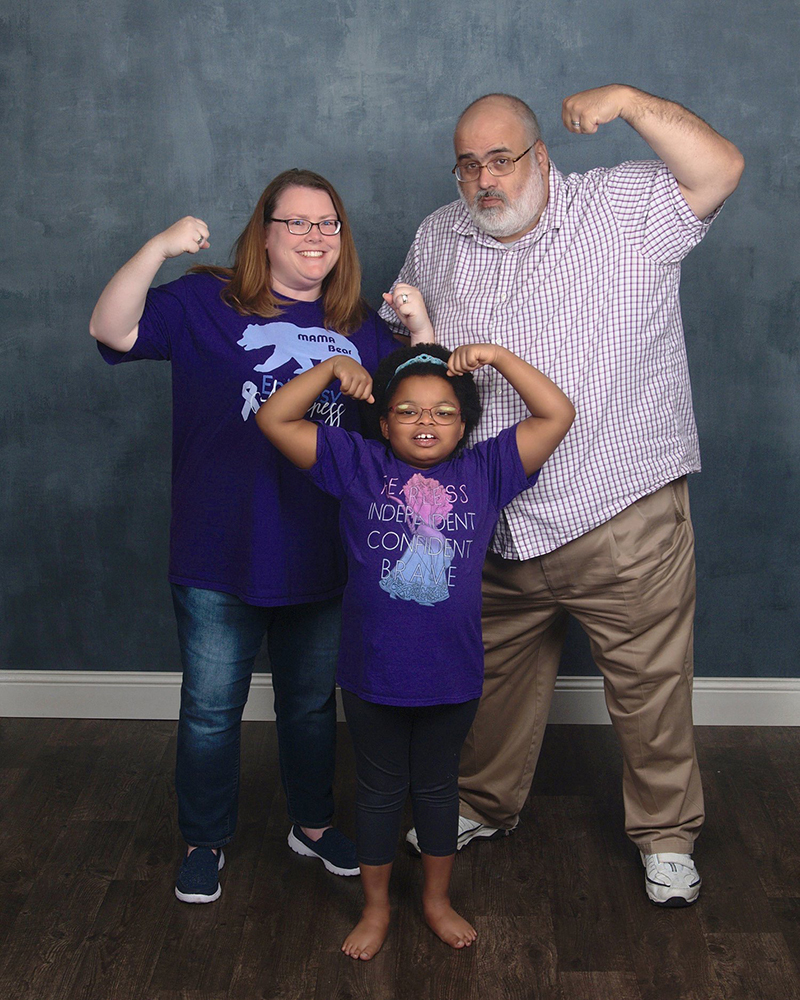 Amy Gaffney is part of the community that relies on Riley for its school program, not just classroom support but advocacy for her 7-year-old daughter, Gigi. Gaffney and Wikel met when their daughters were in kindergarten together.

Gigi was born at 35 weeks and suffers from epilepsy, a compromised respiratory system and a swallowing disorder. Those are the big things she battles, her mom said. They can lead to both short and long hospital stays, during which she gets the academic support she needs at Riley.

“School is a challenge for her,” Gaffney said. “She’s had developmental delays. She’s not a big fan of doing schoolwork especially with mom all the time, so it’s been nice for us when we’re at Riley for someone else to do math and reading with her. She will work better for somebody else.”

No matter what floor Gigi might be on when she is inpatient, the Riley teachers find her and know what she needs to work on, Gaffney said, adding that Wikel has been good about communicating to her staff what Gigi’s needs are.

Beyond that, Wikel has worked with Gigi’s home school in Center Grove to advocate for her medical needs in the classroom and for a homebound teacher half-days.

“To have that person at the hospital who can help be that go-between has been really helpful,” Gaffney said. “She knows the law really well, so she was able to help get services. We are so thankful that Kristin has been there for us.” 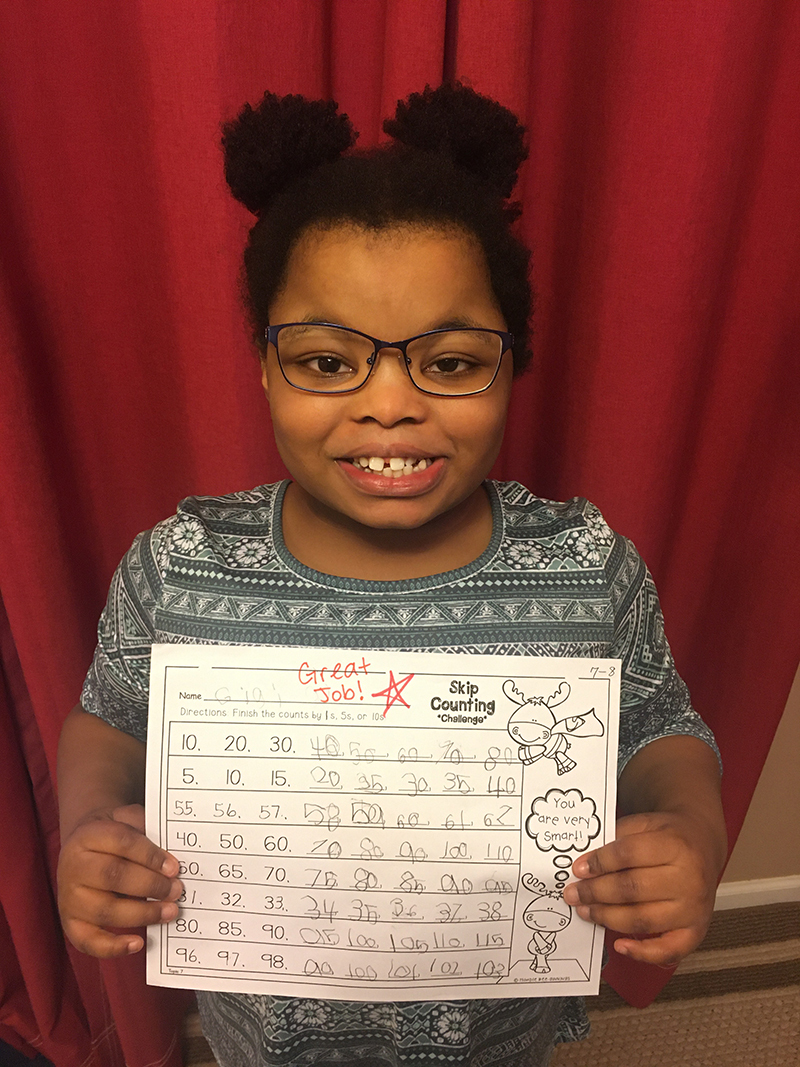 Gaffney wants others to be aware of the support that Riley’s School Program offers to patients and families.

After her daughter underwent brain surgery, Gaffney said she and her husband, Patrick, were so focused on the medical aspect that they didn’t think beyond that.

“You don’t think about how this is going to affect your child when they leave the hospital and go back to school.”

Having a liaison from Riley working with the school makes the transition easier, she said.

Gigi, who is under the care of neurologist Robert Blake, loves the character Merida from the Disney movie “Brave.” The princess is fearless, and that’s what Gigi strives to be.

“We talk a lot about her being brave in the hospital,” Gaffney said.

She’s definitely spunky, and that spunk has kept her going since the moment she was born, her mom said. But she’s also sweet and loving. She loves music and playing with her dolls.

“She’s usually a happy, bubbly girl until she’s not. And then the sass comes out.”

Kristin Wikel: Bringing Education to Young Patients - When a child is hospitalized or dealing with a long-term illness, the priority is health and healing. But families can overlook or be overwhelmed with the task of helping the child keep up with school. Kristin Wikel, however, understood how beneficial continuity in education was for young patients on the road to recovery, and she knew it would be a relief to parents as well.