Riley ECMO honored as a Center of Excellence

Since 1987, a team of superheroes has cared for 1,012 ECMO patients. That team is again being recognized for its life-saving work.

The stories are as different as the patients themselves. There was 2-year-old Millie, who had heart surgery; 7-year-old Jazzy, who was stricken with pneumonia; and 8-year-old Owen, whose flu bug quickly escalated into respiratory failure.

Each was near death and each was saved by a team of superheroes at Riley Hospital for Children at IU Health.

But they weren’t alone. In all, 1,012 patients have been saved using ECMO (extracorporeal membrane oxygenation) at Riley since the technology was introduced at the hospital in 1987.

ECMO refers to a system that removes blood from a patient’s body, oxygenates it and returns it to the patient, allowing a person’s overworked heart and/or lungs to rest for days or even weeks.

The Platinum Level Center of Excellence Award marks the sixth time Riley has been designated a center of excellence (the first time at platinum level) by the Extracorporeal Life Support Organization (ELSO).

“This award is such an honor, and it’s important because it represents our entire multidisciplinary team,” said Gail Hocutt, ECMO program manager. “We’re fortunate in Indianapolis to have two platinum Centers of Excellence – Riley for pediatrics and Methodist for adults. We are among elite company, both nationally and internationally.” 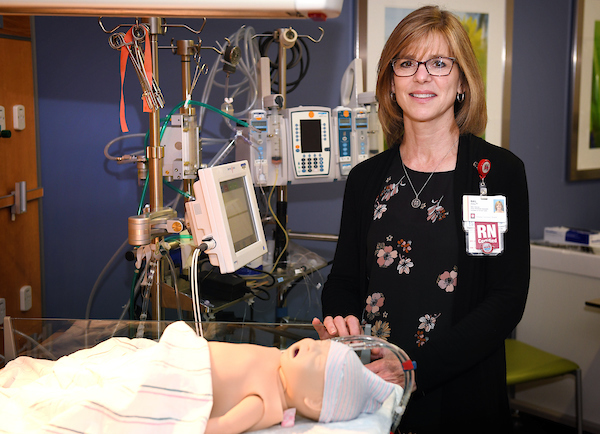 Currently, there are six pediatric and nine adult centers in the nation that are platinum, Hocutt said. More will be awarded in September, when the team is recognized at the ELSO annual meeting in Austin, Texas.

It’s a high honor, she said, and it doesn’t come easy.

In 1987, when the program started in the NICU, all fellows and physicians there were trained just like the technical specialists. It’s too hard to do that now because ECMO is no longer just in the NICU.

“We take care of all kinds of patients now, and there are a lot more people to train and to keep them competent and comfortable in caring for those patients,” Hocutt said.

It’s an evolving practice, with a team of eight physician champions who receive specialized training and are expected to keep up with the latest advancements.

“We change the work we do based on the information we glean from our patient population and outcomes.”

In addition to the cardiovascular intensive care and pediatric intensivists who are specially trained, Hocutt has a team of 30-some nurses in the ECMO program, and she is preparing to incorporate respiratory therapists into the team as well.

“It is still exciting, but I think all of us have a healthy respect for the technology we use,” Hocutt said. “It may be our thousandth, but for this family it’s their first. That’s how you keep it fresh, thinking that we’re doing this for this family and educating them as much as they want to be educated about what it is, and just walking with them along the journey.”

Christa Johns, a nurse in Columbus, is profoundly grateful for Riley’s emergency ECMO team. Her son Owen’s life was saved at Riley earlier this year.

“I thank God every day that they made that call (to send her son to Riley),” she said. “He would have died had he not been there. It felt like every worst-case scenario was happening, but they were prepared the whole time.”

Owen, who was on ECMO for six days, has recovered and will be a second-grader this school year.

Hocutt, who joined the ECMO team in 1989, says ongoing improvement efforts in CVICU, PICU, NICU and physician education have made the Riley program strong.

“I have so much pride, leading a team that works so well together, collaborating to provide great care.”

It’s a partnership that benefits patients.

“We learn and grow with each patient we put on. I am very fortunate to have a physician group that is engaged, and that has taken time,” she said. “It’s nice to have that support – that’s what pushed us over and allowed us to get to the next level.”

The Center of Excellence designation is in effect through 2022.