Riley chaplain intern overcomes his own fears in ministry

“It’s like in ‘The Magic School Bus,’ when Miss Frizzle says to get out there and make mistakes, have fun and learn. While that sounds like a good time, for me that has been difficult.”

Marland Pittman has a gentle way about him. A kind smile. A sense of empathy. These traits serve him well in what can be a difficult post at Riley Hospital for Children at IU Health.

Pittman is a chaplaincy intern in the clinical pastoral education program at IU Health. He floats around the halls of the ninth floor, checking in with young patients and families who are under the kind of stress that the hospital setting can create.

But his calm outward demeanor belies an inner struggle – to rise above the fear of making mistakes. 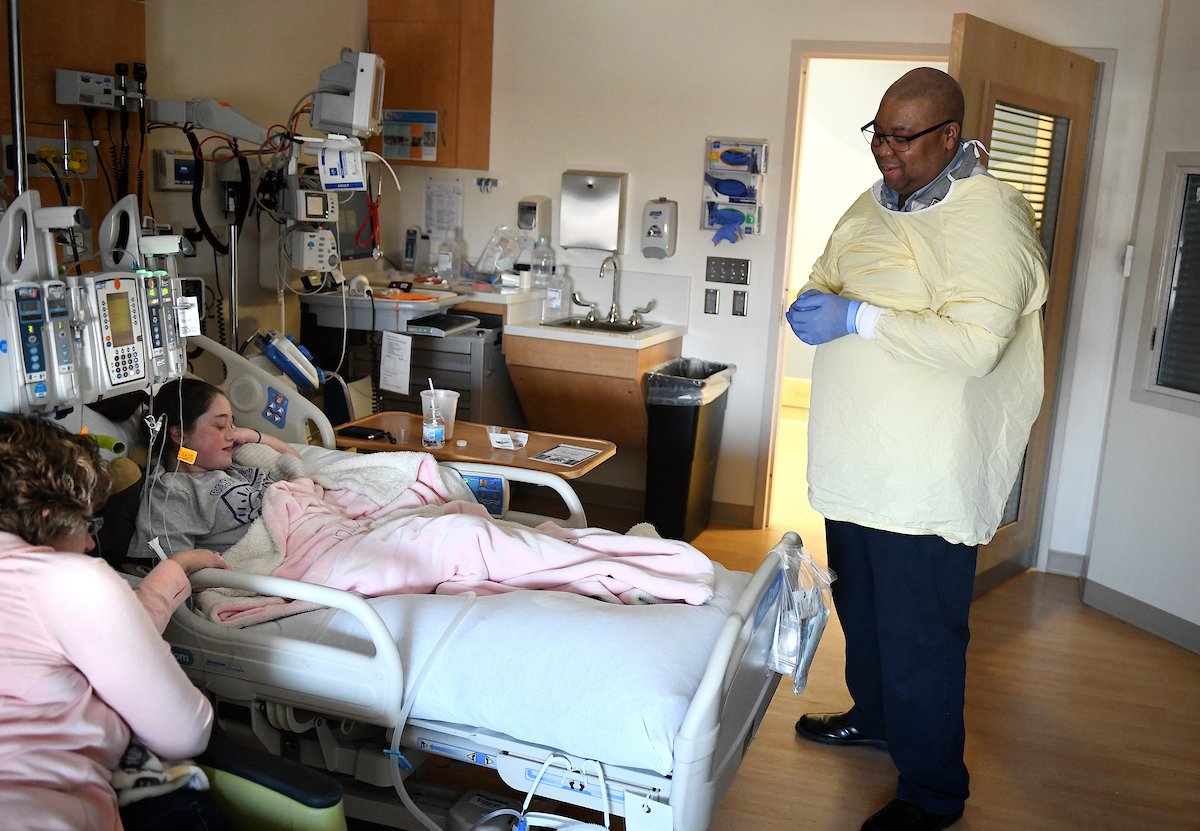 “Working in a hospital is not difficult for me,” he said. “(But) clinical pastoral education is very difficult. The thing that has been most challenging yet rewarding is – we are to do a task (meeting with a patient), then reflect on it. That model is different than what I would have normally done in any other job. Normally, you learn how to do something, then you do it, so you don’t make errors.

“It’s like in ‘The Magic School Bus,’ when Miss Frizzle says to get out there and make mistakes, have fun and learn. While that sounds like a good time, for me that has been difficult.”

But it’s been a chance to grow and to recognize that there’s always more to learn in the area of spiritual care, he said. He and his peers in the clinical pastoral education program meet weekly to talk about the work they’ve done and learn from one another.

“We learn how to be with people, how to be with each other, how to evaluate ourselves. Sometimes you just have to deal with your own stuff so that it doesn’t spill into patient care. We work on it in group and by reflecting on what we have done. There’s a lot of emphasis on self-care, which is valid.”

Pittman, 42, came to the ministry late in life. He is a third-year seminarian at Christian Theological Seminary in Indianapolis and is working for IU Health, not for pay, but for credit and experience. He grew up in Kokomo and attended the African Methodist Episcopal Church. Today, he’s affiliated with the Presbyterian Church (USA).

Though he thought about the ministry as a teen, he knew he didn’t want to be a pastor. Still, over the years, the pull of ministry was there. It was there while he was a student at Purdue University, studying psychological sciences and later English and professional writing. It was there in more recent years when he worked as a technical writer, crafting instruction manuals for software. The latter might explain his struggle to go into a situation without a defined plan. 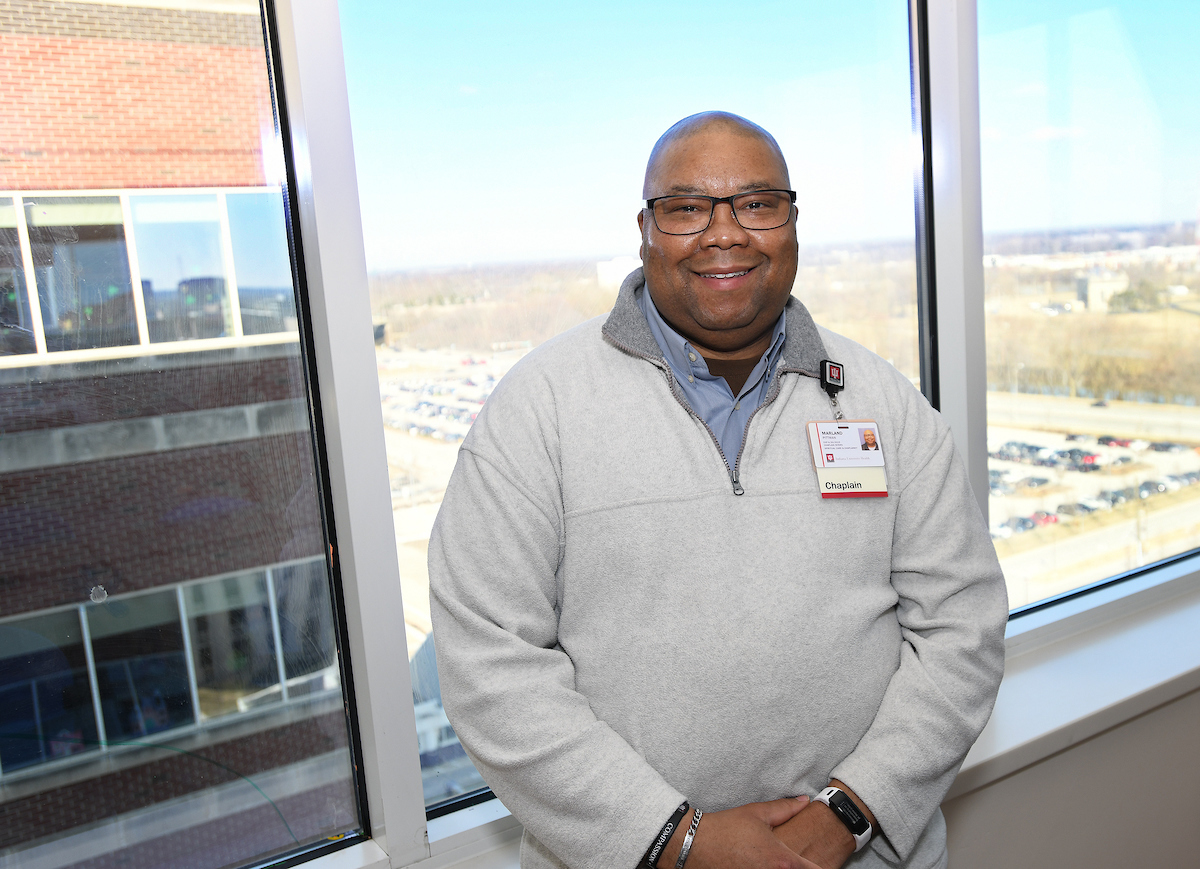 “Patients and families need you to be present and non-anxious in that moment,” he said.

But he’s learning. On a recent Monday morning, he visits the room of a young patient with cystic fibrosis. He asks first if she and her grandmother are comfortable if he comes in, then he puts on the required gown and gloves and moves into the room, where he engages the teen with small talk about why she’s in the hospital. In that conversation, he’s doing a kind of spiritual assessment.

When she tells him she had a chest tube put in over the weekend, he gently inquires if she had family and church support to get her through the experience. He asks the same questions of the grandmother, understanding that the patient’s pain is shared by her family.

Then, with the teen and her grandmother’s permission, he says a simple prayer for healing. But the prayer really can be about anything, he says.

“I’m not here to tell you what you have to do to get better. I’m just here to meet your needs. If you just want to get out of here and go eat ice cream, we can pray about that.”

Pittman said later his goal is to simply be with people in their time of need, rather than pushing theology.

“For me that’s much more important than – this is the story of Christ and here’s how it will affect your stay,” he said. “We see where people are, see what they need, then provide that care.”

He describes his theology and his ministerial style, at least within the hospital setting, as communal. “Presence is a big part of what ministry is for me,” he said. “Whatever space you’re in, I want to be there with you. I’m less interested in bringing people to some sort of religious understanding; it’s more of a lens that helps me be with people wherever they are.”

The married father of two is still discerning how best to use his gifts in ministry but says that hospital chaplaincy is a possibility.

“I might actually be inclined to do this; otherwise they wouldn’t let me go see patients,” he said with a chuckle.

“Church community is still important to me, and I recognize there are other ways to serve that community.”