Blake Stickels was born with a congenital heart defect and a myriad of other health issues. The anatomy inside his body is so rare that, in a given year, cardiologists at Riley Hospital for Children at IU Health may not see another child with the same condition.

The scary moments happen. When 2-year-old Blake Stickels has his blue spells, his feet and hands turn a grayish, purplish blue.

When things get really scary, Blake’s usually rosy cheeks will fade to blue, too.

Blue is the color that tells the story of Blake’s body, and Cora Stickels has had to figure out something no mom wants to -- how much blue is too much for her little boy?

“He goes to sleep and I’m always going in to check on him, pulling up the blanket to make sure he’s not blue,” says Cora, who lives in Tipton, Ind. “You feel relief to see the pink cheeks.”

Blake was born with a congenital heart defect and a myriad of other health issues. The anatomy inside his body is so rare that, in a given year, cardiologists at Riley Hospital for Children at IU Health may not see another child with the same condition. 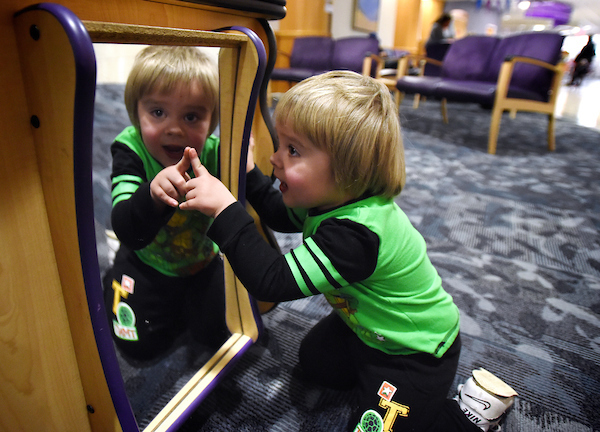 Of the 95,000 babies born in Indiana each year, an average of two will have the same anatomy as Blake.

His condition is a complicated one – a frightening one. But Cora has found enormous comfort inside a tiny hospital room at Riley with Randy Caldwell, M.D, a pediatric cardiologist, by her side.

Just hearing Dr. Caldwell’s voice, she says, can make what seems like a nightmarish day normal.

“Anytime we’re upset, anytime we are concerned, he is there,” says Cora, who lives in Tipton. “He will tell us, ‘Here is what it is. This is how it goes.’”

There are times they get worried, when Cora and Blake’s dad, Allen, feel like the blue has become too much. They go to Riley.

“Sometimes we come in and it’s nothing at all. Dr. Caldwell will tell us that,” she says. “I’m like, ‘If Dr. Caldwell says that then I believe it.’”

Cora and Allen are certain Riley – and Dr. Caldwell – saved their son’s life. All the testing done to find out his condition. The two open-heart surgeries Blake has undergone. The third surgery that Dr. Caldwell is preparing the family for.

“We would have never known,” Cora says. “We probably would have ended up waking up one day and just found Blake…”

She can’t finish her sentence, but it’s clear what she means.

“There is no way he would have lived this long,” she says. “He was in heart failure.”

Cora plans to start a blog. She already knows how her first entry will begin. 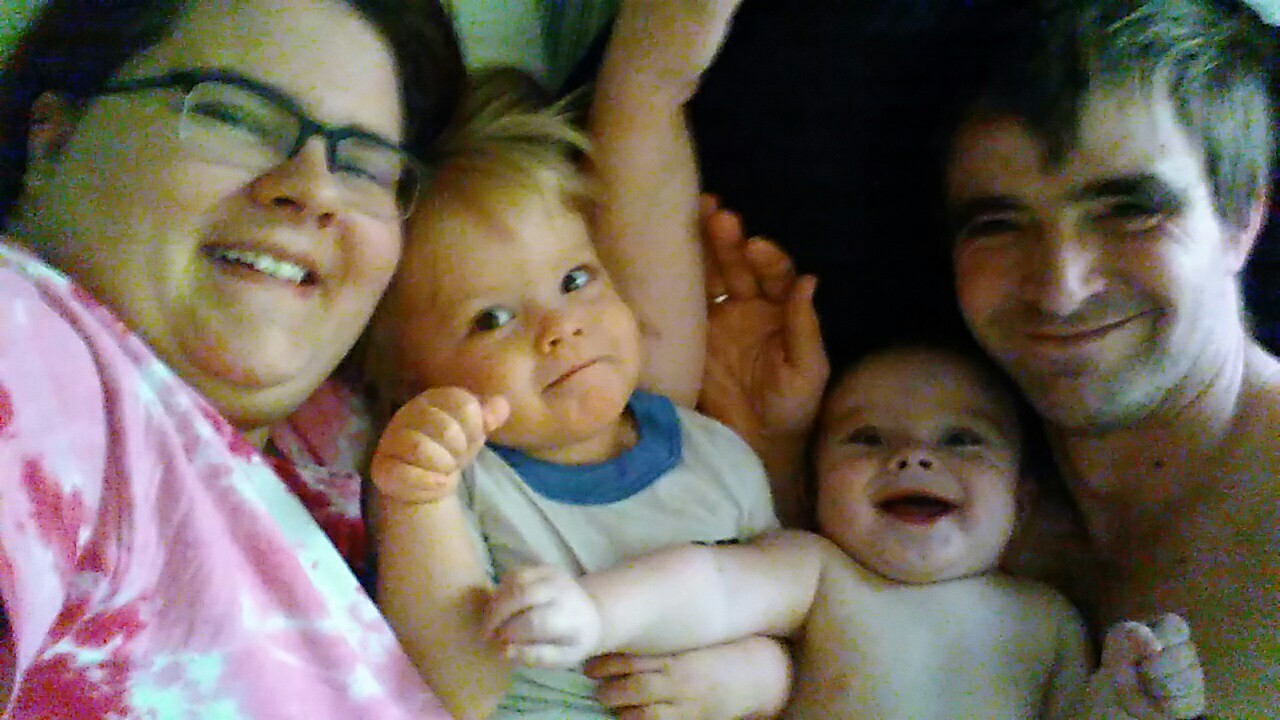 On the third day at IU Health Methodist hospital, where Blake was born on June 1, 2015, ordinary vanished.

Doctors came in to tell her that Blake had L-transposition of the great arteries.

As Cora explains it to people: “It’s a really big term that basically means the bottom half of his heart never rotated while he was in utero.”

The Stickels were sent home from Methodist with paperwork for an appointment at Riley the next day. When Blake was just four days old, he met Dr. Caldwell.

His heart points to the right side of his chest instead of to the left, a condition called dextrocardia. Blake also has heterotaxy, a rare condition in which his organs are abnormally arranged in the chest and abdomen.

“Everything in his body is mirror image of what it should be,” Cora says. “His heart is on the other side, his lungs are reversed, his stomach is on the opposite side.”

Instead of looking at it in a negative way, though, Cora sheds the positive light on it.

“I always said I wanted a special child,” she says. “He is definitely special.”

Dr. Caldwell walks into the room at Riley. Blake and his 3-year-old brother Junior are playing around. 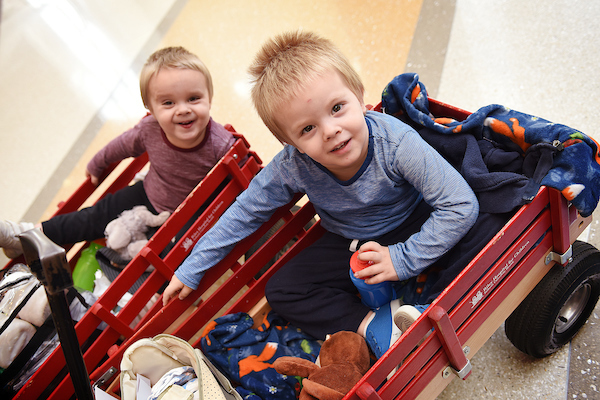 “Blake, how are you?” he asks, shaking Blake’s hand. As he checks Blake out, Dr. Caldwell asks Junior if he’d like to help.

It’s late October and Dr. Caldwell wants to know how things have been going since Blake left the hospital after his July surgery.

“It’s been a bumpy road,” Cora tells him.

She is worried about the harsh cough Blake has had. She is worried that he gets worn out when he plays with Junior. She worries that his saturation levels – the amount of oxygen in the blood – dips too low, at times. And, she says, lately Blake has been sleeping a lot.

Dr. Caldwell puts Cora’s and Allen’s worries to rest. All of this is normal – for Blake.

“I would like him to be as active as he wants to be,” Dr. Caldwell tells them. “When he is exercising and moving around his stats are going to drop a little bit.”

And he will get tired. His heart isn’t functioning as a typical 2-year-old’s heart would. If he’s fatigued and needs to sleep a lot, let him, Dr. Caldwell says.

Blake’s saturation levels, too, are about what is expected. Normal is 95 percent. As long as Blake’s levels are in the high 70s to mid 80s, that is fine, he says. 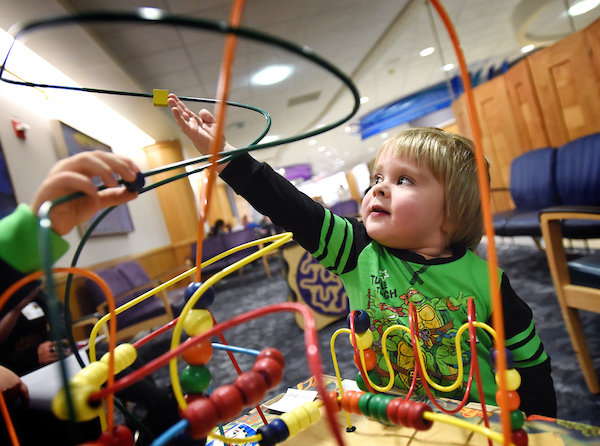 “I’m not disappointed in how he’s doing,” Dr. Caldwell says. “This is what we expect. But again, it’s not normal.”

But, Dr. Caldwell says, “we want to get him older and bigger before we do the next surgery. He is the one controlling when we do that next surgery.”

Cora is in no hurry to send Blake in for another surgery. She knows it’s saving his life, but it is so tough on her.

“You see him going away with a smile and you say, ‘Bye sweetheart, be good,’” Cora says. “It is difficult. You know they are going to cut your baby open.”

Dr. Caldwell tells the Stickels he’d like to see them back in six months – unless something concerning happens with Blake before then.

He looks at Blake sitting on the exam table. “You are a good boy,” he says. “Do you want to sit up there or do you want to get down?”

“Get down,” Blake answers.

“OK, very good,” Dr. Caldwell says, as he holds his hands out for Blake to take hold of. “Let’s jump down.”

Blake looks up at Dr. Caldwell, takes his hands – and he jumps to the floor. It’s clear Blake trusts Dr. Caldwell, that he is completely comfortable with him.

It’s almost like Blake knows this man is saving his life.