Michele Boyer, a Riley kid herself 54 years ago, went on to become a respiratory therapist at the hospital. Now she’s a beloved volunteer in the Child Life Zone and is being honored with the Red Shoes Award.

Michele Boyer has a way with kids. They gravitate to her in the Child Life Zone at Riley Hospital for Children, where she volunteers. Just like they did nearly 40 years ago when she was a respiratory therapist at Riley.

At least now, she says, “I get to do just the fun stuff and not make any kids cry because of a procedure I had to do.”

The RT work was challenging, especially in the beginning for a young Boyer, who said she treated her patients not as patients but as the kids they were. It took a toll.

“I would be so overwhelmed when I first started working there. After every shift before I could even drive home I’d sit in my car and cry,” she said. She told herself she couldn’t do it, the work was way too sad, just seeing what the kids go through. But then she gave herself a talking to. 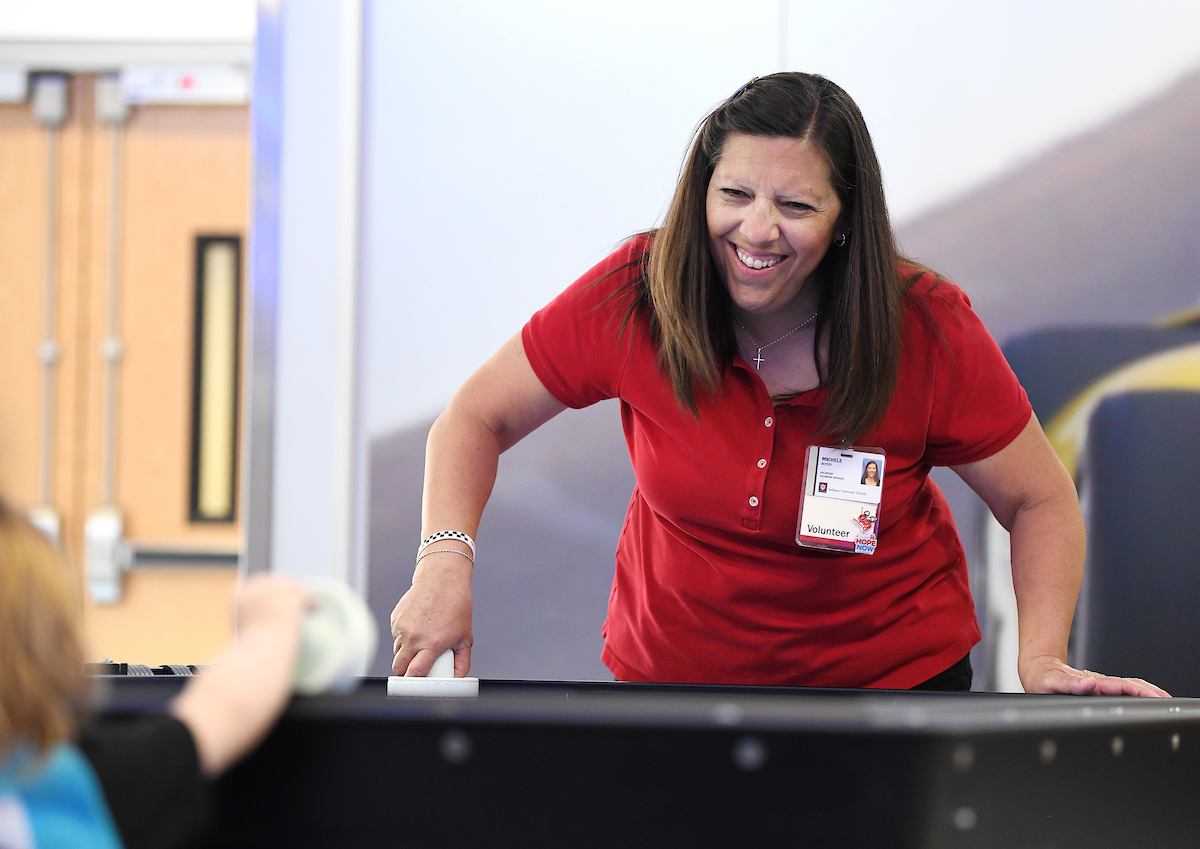 “This hospital is going to be here and there are always going to be sick kids,” she said. “I had to get my emotions in check and help take care of these kids, help make their day a little better, or just quit. That was the turning point.”

Boyer’s connection to Riley goes back even further. She was 5 when she came to the hospital for treatment of a seizure disorder. She returned as a young woman to work in respiratory therapy. Then she took the next quarter century off while she raised six children with her husband, David.

But she never really left her love for Riley behind. She talked about her work and shared pictures with her children as they grew up, and each one of her kids would go on to volunteer at the hospital. One of her daughters met her fiancé at the hospital’s annual kidney camp, where both were volunteering.

When she took her youngest daughter in to sign up to volunteer, Boyer felt the pull again and found herself signing up as well. She works in the Child Life Zone on Mondays and Wednesdays.

She’s made quite an impression on the young patients and their families there. So much so that one young girl named Neveah Baker nominated her for the prized Red Shoes Award, given to team members and volunteers who exemplify the spirit of family-centered care. 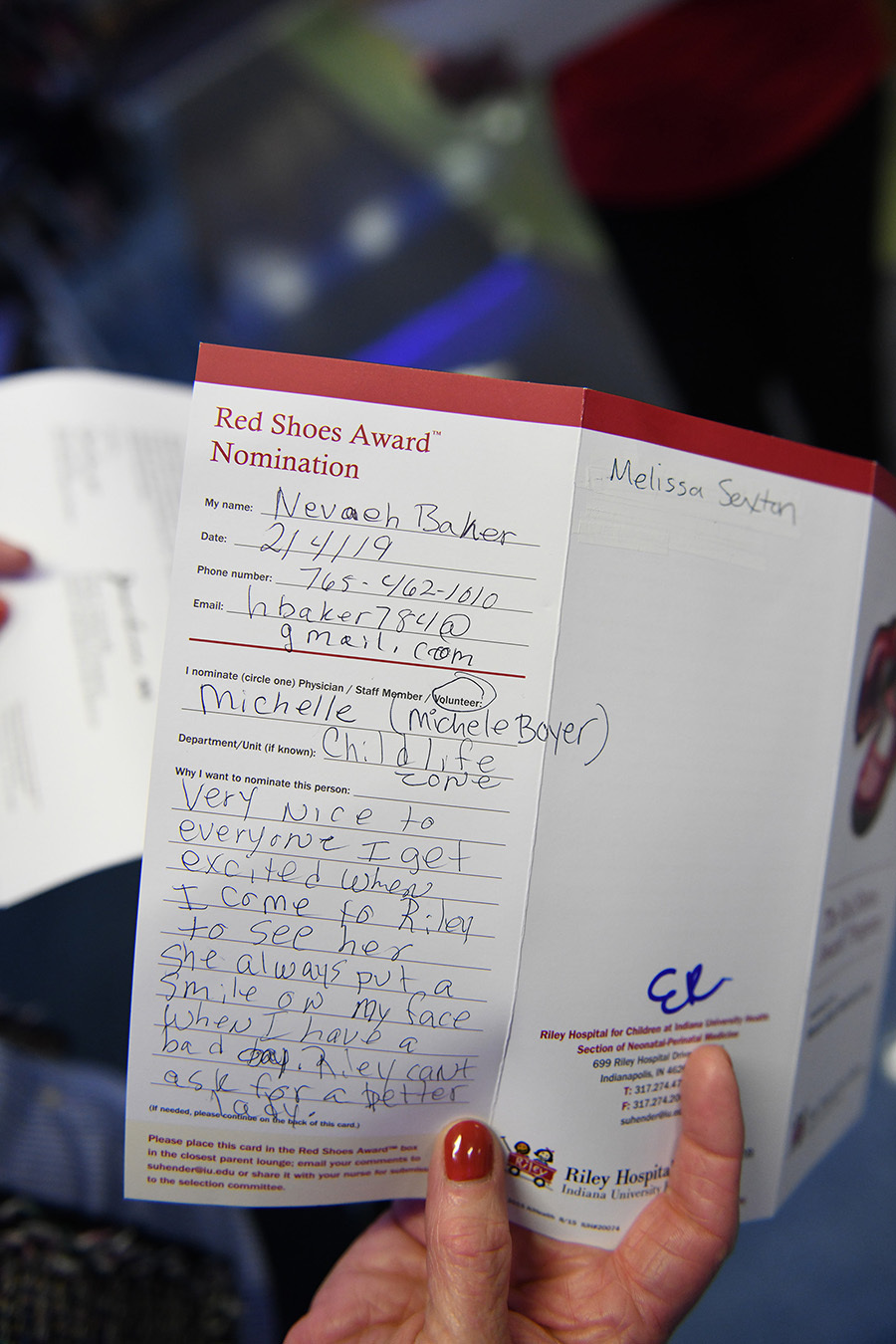 In her nomination letter, Neveah printed this: “Very nice to everyone. I get excited when I come to Riley to see her. She always puts a smile on my face when I have a bad day. Riley can’t ask for a better lady.”

The award is sponsored and administered by the Riley NICU. Anyone can nominate a member of the Riley family for the monthly staff and volunteer award. An annual award is given to physicians.

When informed of her nomination, Boyer, 59, was speechless.

“I don’t volunteer expecting to get an award. I just love going in there. I wanted to do something for the kids, but in the end, it really does help me because it gives me perspective on life to see what these kids and families are going through.”

The Child Life Zone is a home away from home for many kids and families who spend a lot of time at the hospital or visit frequently. In Boyer’s mind, it gives the kids a sense of normalcy when abnormal things are going on in their life. And it gets their mind off their medical problems.

But it’s also a haven for families. “A lot of times parents will come in and just pour their heart out,” Boyer said. “It’s almost like therapy time for them. It’s a relief for them to have somebody to talk to.”

Boyer understands the fear and exhaustion they feel. She resolves to never let the “small stuff” bother her.

“When you see what these little kids go through, it gets to be so much for these families. So gosh, when they can come to the hospital and actually look forward to coming to the Child Life Zone and play and paint and do crafts, I want to be part of that.”