Jeff Eaton is learning about strength in the face of illness as he teaches sick kids while quietly fighting his own battle against cancer.

If you remember spelling lessons from your youth, you might recall the trick to spelling the word principal when you’re referring to the leader of a school: The principal is your pal.

Well, the kids Jeff Eaton interacts with in his role as a volunteer teacher with the Riley School Program might see him as a pal, but they probably don’t know he’s also a longtime school principal.

Eaton, 66, is in his second year as a volunteer at Riley Hospital for Children at IU Health, after retiring from a 30-year career in school administration, the last 20 as a principal in Franklin Township on the southeast side of Indianapolis.

It’s a role he relishes for many reasons.

“I enjoy it,” Eaton said as he walked briskly from room to room, traveling up and down elevators, to collect schoolwork from a second-grader and a sixth-grader and to check in with the full-time teaching team at Riley. Earlier in the day, he’d also worked with a fourth-grader and an eighth-grader.

“I worked all my life with kids,” the retired principal said. “God blessed me, putting me in education. If you love kids, it’s a great life.”

The Riley School Program supports students in kindergarten through 12th grade who come to Riley for a variety of treatments. There are 11 paid teachers and two student teachers on staff, each partnering with patients’ schools to coordinate assignments to ensure children keep up with their schoolwork as best they can.

As a volunteer, Eaton usually tutors children in math and says he’s probably most effective with middle-school kids, “but I like the little kids, too.”

And sometimes they teach him a thing or two – like strength in the face of illness.

Eaton, who today is being shadowed by an IUPUI student, brings a passion for education and a heart for kids with him when he reports for his Friday shifts at the hospital, where he understands that the patients don’t always feel like doing schoolwork.

Their health dictates how much they can do school-wise, he said, and that takes priority. So, he exercises plenty of patience and keeps in mind a mantra he used when supervising teachers at the schools he led: “Don’t try to teach them how much you know until you show them how much you care.” 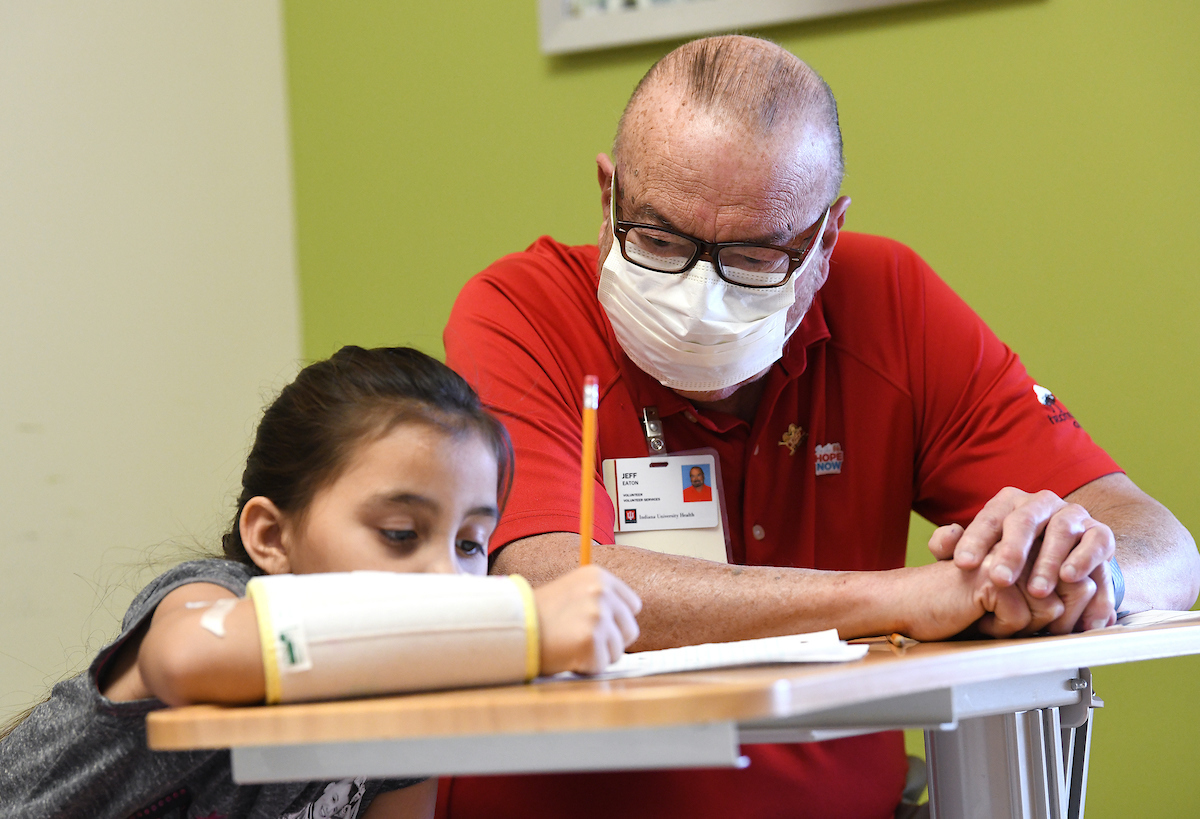 When he walks into a 7-year-old patient’s room, you can almost see the smile behind the mask he wears to reduce the risk of the child being exposed to germs. He quizzes the little girl on place-value problems in math as her mom watches.

“You did a great job today,” he tells the second-grader. “I’m very impressed.”

Then it’s her turn to smile, as he collects her work and moves on to the next room.

Peggy Green, educational liaison and Riley’s Teacher of the Year in 2019, appreciates having a volunteer of Eaton’s caliber.

“He gets to know the kids so well and builds a relationship with them first, which is really what teachers do in the classroom,” she said. “You don’t know what you’re going to get when you walk in a room – what kind of mood they’re in or how they’re feeling. But we can trust him with anyone.”

TIME TO GIVE BACK

Eaton remembers sitting on his couch watching TV one night after retiring when he decided to look into volunteering at Riley.

“I thought to myself, ‘Eaton, you could volunteer your services.’ And I really didn’t know about the education program at Riley. I was just going to volunteer here. When they found out my background, they steered me in this direction, and it’s been great. I love it.”

He says all of this while putting up a quiet fight against illness himself – cancer that started in his prostate and has since “jumped around.”

But even as he finishes up chemotherapy, he doesn’t want to give up on possibly his most important teaching assignment.

The father and grandfather says he gets a gratitude check every time he walks through the doors of Riley.

“God has blessed me. It’s been great for me, it’s one of the best things I’ve ever done.”