Pushing through the pain to stand on her own

A bone disorder affected her growth, but teen keeps putting one foot in front of the other on her journey toward healing.

Adelaide Binkley wears an oversized hoodie to hide her lean, 14-year-old frame. Her dark hair falls into her face as she focuses on straightening her leg, willing her knee to lock in place.

“Push, push, push,” says the physical therapist who supports the teen as she stands. “Good job!”

It takes grit, and that is something Adelaide – “Addy” for short – has in spades. For half her life, she has endured surgery after surgery, more than a dozen in all, to lengthen her right leg and left arm to compensate for fibrous dysplasia, a disorder where bone is replaced by fibrous tissue, leading to uneven growth in her limbs. The exact cause of the disease is not known but is believed to be due to a chemical defect in a bone protein. 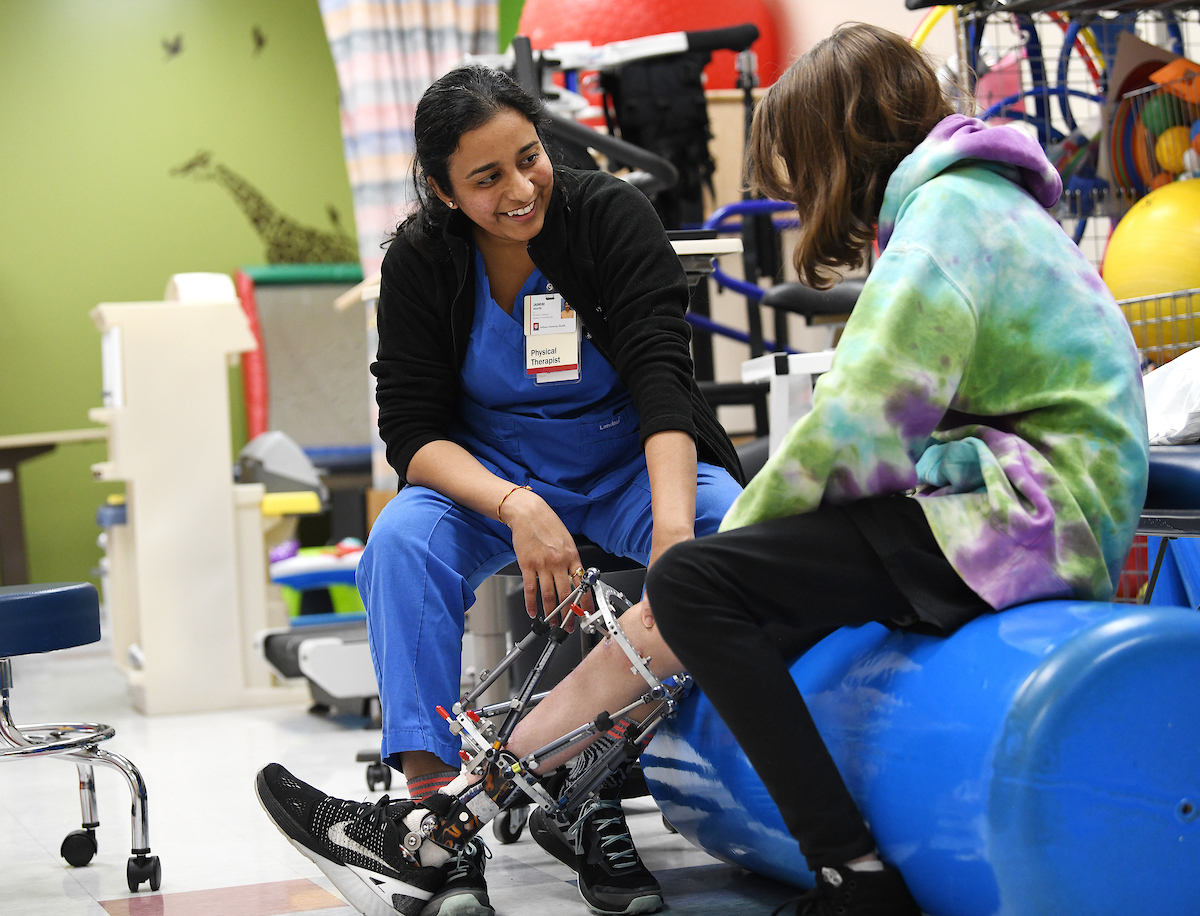 Addy was diagnosed at age 4, but it wasn’t until a couple of years later, when she broke her leg while dancing in her living room, that the family was referred to Riley Hospital for Children for treatment. She has been under the care of Riley orthopedist Christine Caltoum since that time.

Her mom, Miriam, says despite the debilitating disease, Addy “acts like it’s nothing.” She’s learned how to be tough, not letting others know the anguish she sometimes feels.

“The worst pain I ever saw her in was when they operated on her finger,” her mom said as she and her husband, Tracey, watched Addy during the hour-long therapy session in Riley’s outpatient rehab center.

Today, Addy is wearing what looks like a torture device on her right leg, but the external fixator is holding her bones in the proper position to heal after her most recent surgery in June. The stabilizing frame allows metal pins or screws to be placed into the bone through small incisions in the skin and muscle. Those pins are attached to a metal frame outside the skin.

“Not really,” the soft-spoken teen says. But it’s mighty uncomfortable. She can’t wait to get the contraption off later this month so she can wear regular pants, instead of the leggings she wears with one leg cut off to accommodate the fixator.

The procedure to remove the device will be done at the start of winter break, so the Beech Grove eighth-grader can spend the next two weeks healing before school starts again.

Addy has worked with Riley physical therapist Jaimini Khatri for nearly six months, learning how to bear weight on her right leg and foot again and improve her hip and leg extension.

Although initially, Addy couldn’t bear for Khatri to touch her right foot, they worked through that challenge, and by the end of September, she had made significant progress.

“She came here in a wheelchair, and now we are walking,” Khatri said as she helped her patient steady herself to take a few steps in the rehab room. “She has been walking with one crutch at school and independently walking inside her house.” 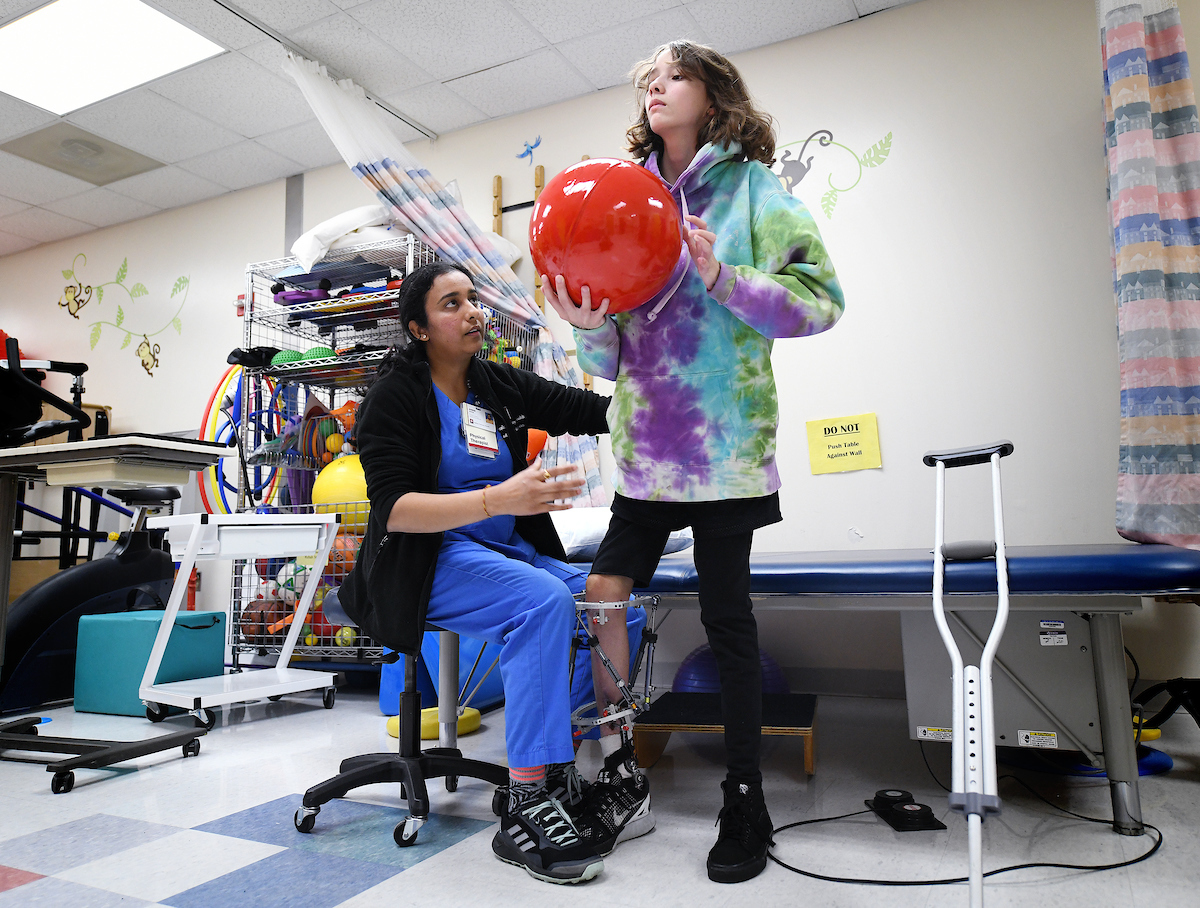 As they tossed a ball back and forth, Khatri reminded her patient to center her weight so she was not leaning to the left.

“This is stretching her hamstring as well as shifting her weight,” Khatri said to the girl’s parents before turning her attention back to Addy. “You feel your legs are shaking? Your muscles are getting stronger.”

Khatri, who moved here from India and is certified in neuro-developmental PT treatment, marvels at Addy’s strength.

“Her pain tolerance is unbelievable. She is super strong, a real fighter, and she has a great spirit.”

That spirit has carried her through this difficult journey, says Miriam Binkley, who also credits Khatri with getting the best out of Addy.

“Jaimini is really good at not listening to Adelaide say ‘I can’t’ and pushing her through and showing her that she can,” Binkley said. “It’s amazing how much she has improved since starting physical therapy. She had some nerve damage from surgery, and no one could touch her toe, her foot, or she would scream in pain. And now she’s walking on that foot. She’s kicking a ball.”

Because of her multiple surgeries, Addy has never played sports. What she loves is band – she plays the clarinet – and anime. She never leaves home without one of her sketchbooks, which she fills with drawings of her favorite anime characters. She has quite the collection at home.

Once the fixator is removed and Addy’s leg has healed, her mom has promised to take her shopping for new clothes. But Miriam won’t be surprised if her easy-going girl wants something more than clothes.