Tiny preemie was born 16 weeks early, but she has tripled her weight and has the nurses wrapped around her little finger.

“This is Princess Charlee.” 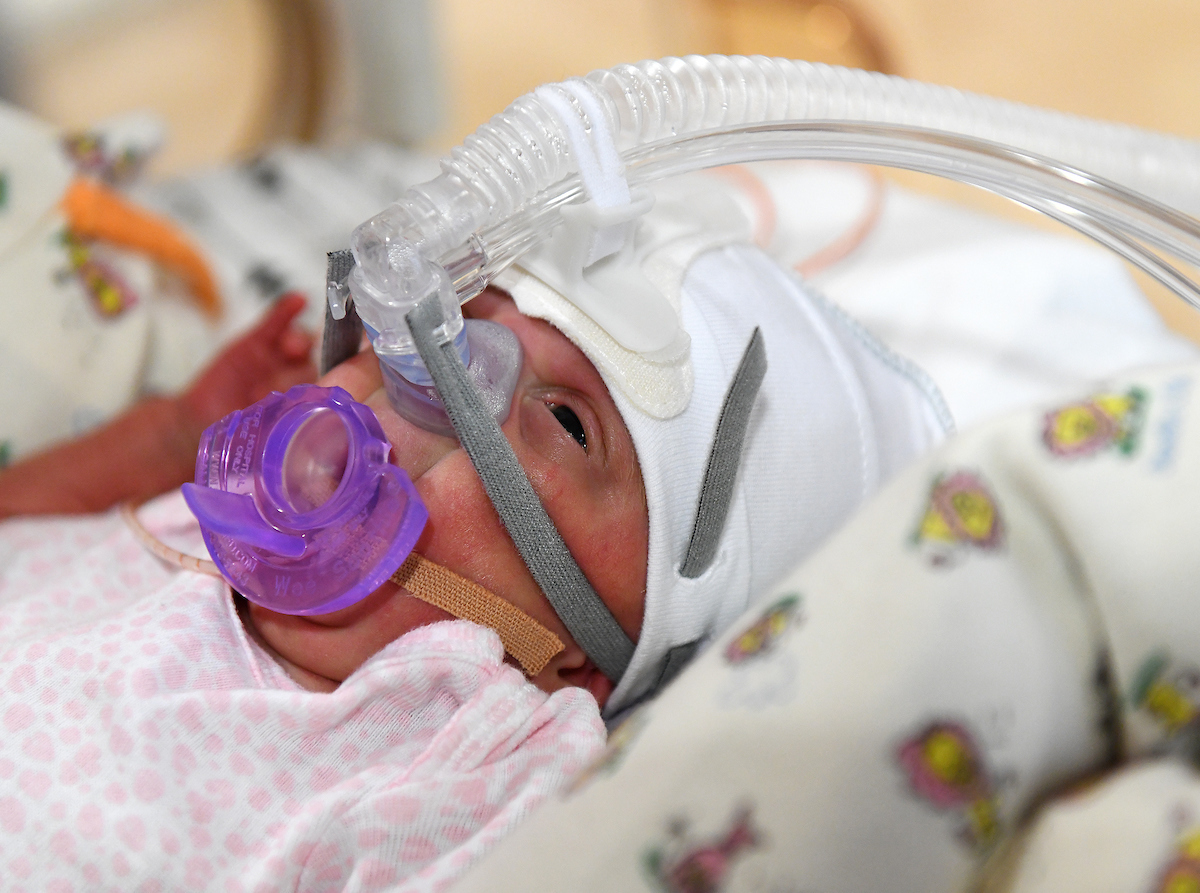 “She’s super sweet, she wakes up and smiles at you,” Benjamin said as she checked in on the now 3-pound 10-ounce girl. “I’ve had little Charlee since she got here, and I just love her.”

Charlee, named for a mix of family members, is an early bird. As in, she came into the world way too early – nearly four months before her due date.

Her parents, Noah and Alex Strati of Indianapolis, don’t know why she was so eager to arrive. There were no signs of trouble for Alex during her pregnancy – until that day in the Target parking lot in northern Indiana when her water broke.

The first-time mom had just arrived in the store parking lot after driving 2½ hours from Indianapolis. She was visiting for the weekend to attend a baby shower hosted for her by the couple’s grandparents, who live in Elkhart.

Alex didn’t realize the significance of what happened and says she felt fine, but she decided to go to the local hospital in Elkhart to be checked out the next morning – on her way to her baby shower.

She never made it to that shower. An exam revealed she was in labor, and she was transferred to a hospital in South Bend that has a NICU. Meanwhile, all the guests were already at the party, which went on without the guest of honor, but soon afterward they piled into cars and joined Alex and her mom at the hospital. Noah, who was still in Indianapolis when the drama unfolded, drove up that day to be with his wife. 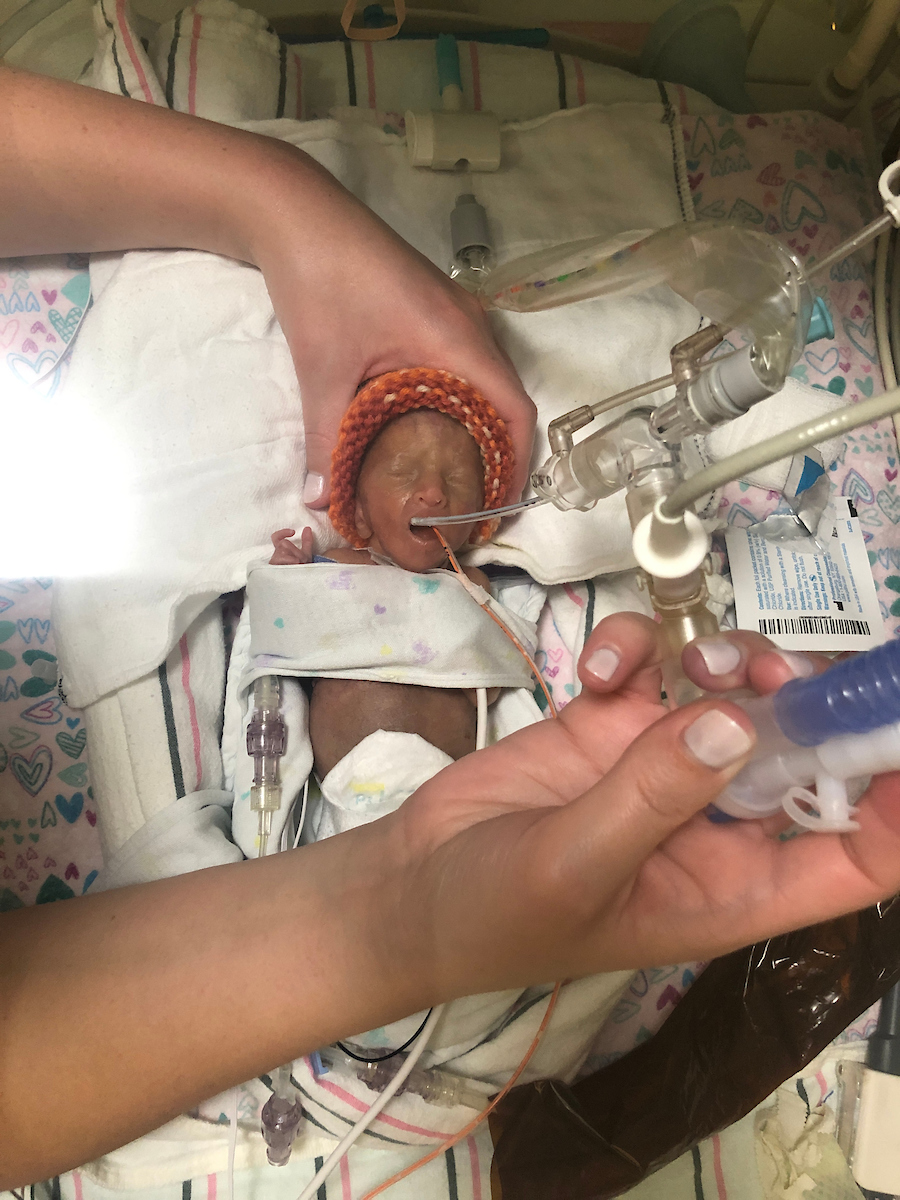 Efforts to stop the labor were unsuccessful, and Charlee was born two days later, Nov. 19. She was 16 weeks early – born at 23 weeks and 5 days – and she weighed a wispy 1 pound, 2 ounces.

Noah and Alex knew that their baby might not make it. They’d been prepared by the South Bend hospital staff, but Charlee is nothing if not determined.

For the first three weeks of her life, she remained in the NICU in South Bend, where the family was surrounded by loved ones day and night.

“It was almost a blessing that it happened in South Bend because a lot of our family lives there,” Noah said. “They were able to support us when it first happened.”

Still, the first month or two were “horrible,” he said. “The last month has been better.”

Charlee was transported via IU Health LifeLine to Riley Hospital for Children at IU Health when it became apparent that she needed lifesaving surgery to treat necrotizing enterocolitis (NEC), a deadly infection that often strikes the intestines of premature infants.

Riley neonatologist Dr. Diane Lorant oversaw the first few weeks of Charlee’s care, and Dr. Matthew Landman performed the surgery on the preemie, removing 10 centimeters of her small intestine. It was not an easy surgery for the tiny baby. She coded twice, her parents say, but she is stronger now. “Feisty” is how her nurses describe her. “Spunky” is the word her doctor in South Bend used.

When she weighs 4 pounds, which could be in the next couple of weeks, she will have another surgery to put her intestines back together. 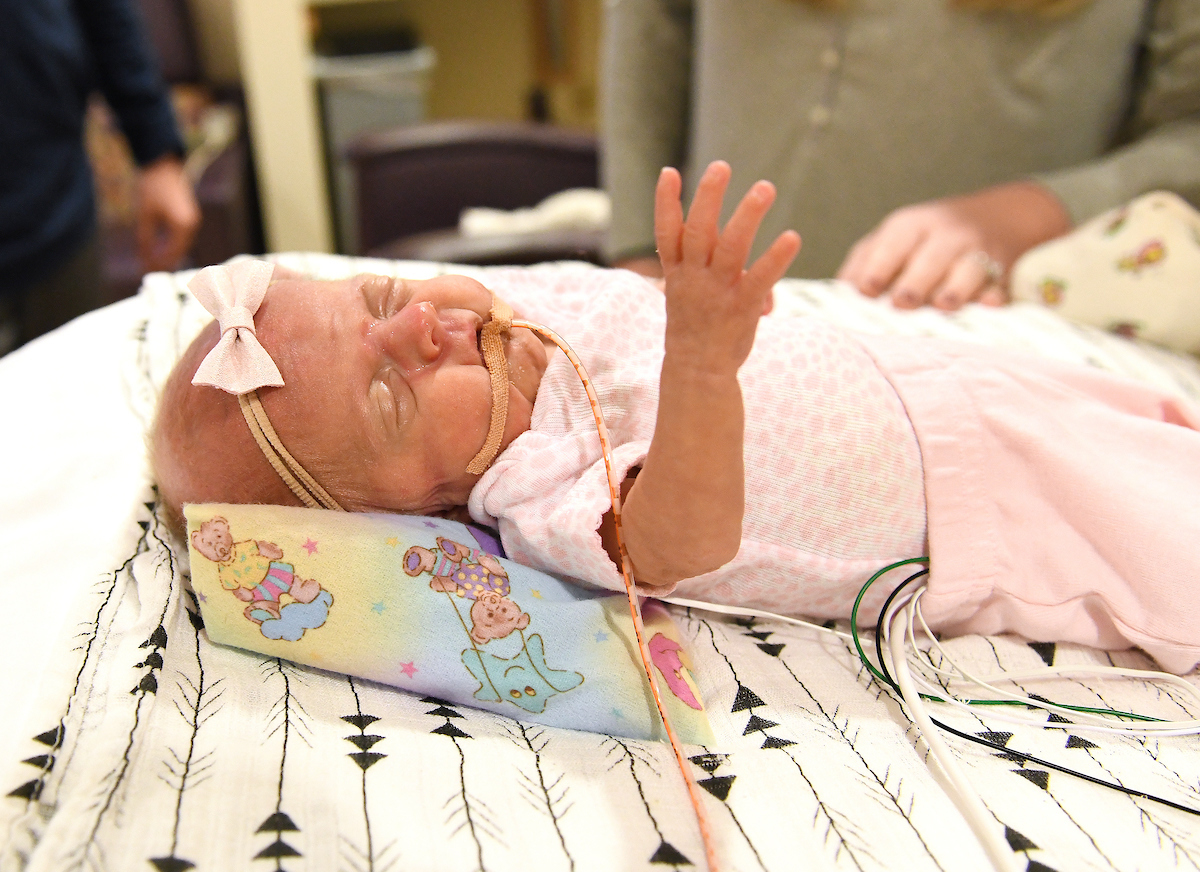 As Noah and Alex worked together last week to dress their growing girl in the tiniest pink top and pants, respiratory therapist Angie Sproles monitored Charlee’s oxygen levels. She’s breathing on her own, which is a huge milestone, though she wears a CPAP mask over her nose that helps maintain pressure and keeps her lungs working properly. Sproles took the mask off for a few seconds while photos were taken and a tiny bow was put in the baby’s hair.

The nurse credits Charlee’s parents for how well she continues to do, saying “they are here every day holding her and caring for her, so she has really thrived.”

That nursing support has meant the world to the family, Noah said. While the attending physicians rotate, “the nurses here have been consistent,” he said. “We’ve been kind of spoiled, but it adds value when you have the same nurse.”

Caring for Charlee is easier now that she is growing, but Alex acknowledges that she didn’t allow herself to look too far into her daughter’s future during those first several weeks after her birth.

But her husband said he forced himself to think positively “because if we were both negative it could have gone to a dark place.”

What was particularly difficult for Alex was wondering why her pregnancy didn’t go as planned. She worried that she had done something wrong, even though her doctors assured her that sometimes these things just happen.

It still hurts her to look at a photo of her daughter shortly after birth. The 11-inch-long baby was no wider than Noah’s hand, her eyes still fused shut.

“You hear about these things happening, but you don’t think it will happen to you, especially when all of your appointments were fine,” Alex said. “We found out she was a girl the last week of October. Three weeks later, she was here.”

Today, Charlee receives weekly treatment for retinopathy of prematurity to prevent blindness. Her tiny cry can be heard as the ophthalmology team examines her eyes, but it’s all part of the work her care team must do to prepare her for the day she goes home.

When that day will be is anyone’s guess at this point, but Noah figures it could be the end of April. Charlee’s original due date was March 12.

Her favorite nurse is rooting for her.