PICU nurse practitioner: “You can’t help but root for these kids”

Chrissy Geis finds her inspiration in the critically ill children she sees every day at Riley.

The streaks of pink in her hair are a great conversation starter for kids when they meet Chrissy Geis for the first time.

The nurse practitioner in the pediatric intensive care unit at Riley Hospital for Children added the flair to her hair over the summer.

“I just like to express myself in different ways,” Geis said during a break from her duties caring for sick kiddos on the seventh floor of Riley last week, which just so happened to be Nurse Practitioner Week. “I have a fun and creative side that I don’t usually get to show here because I’m doing serious work, but the kids see it and think it’s cool.” 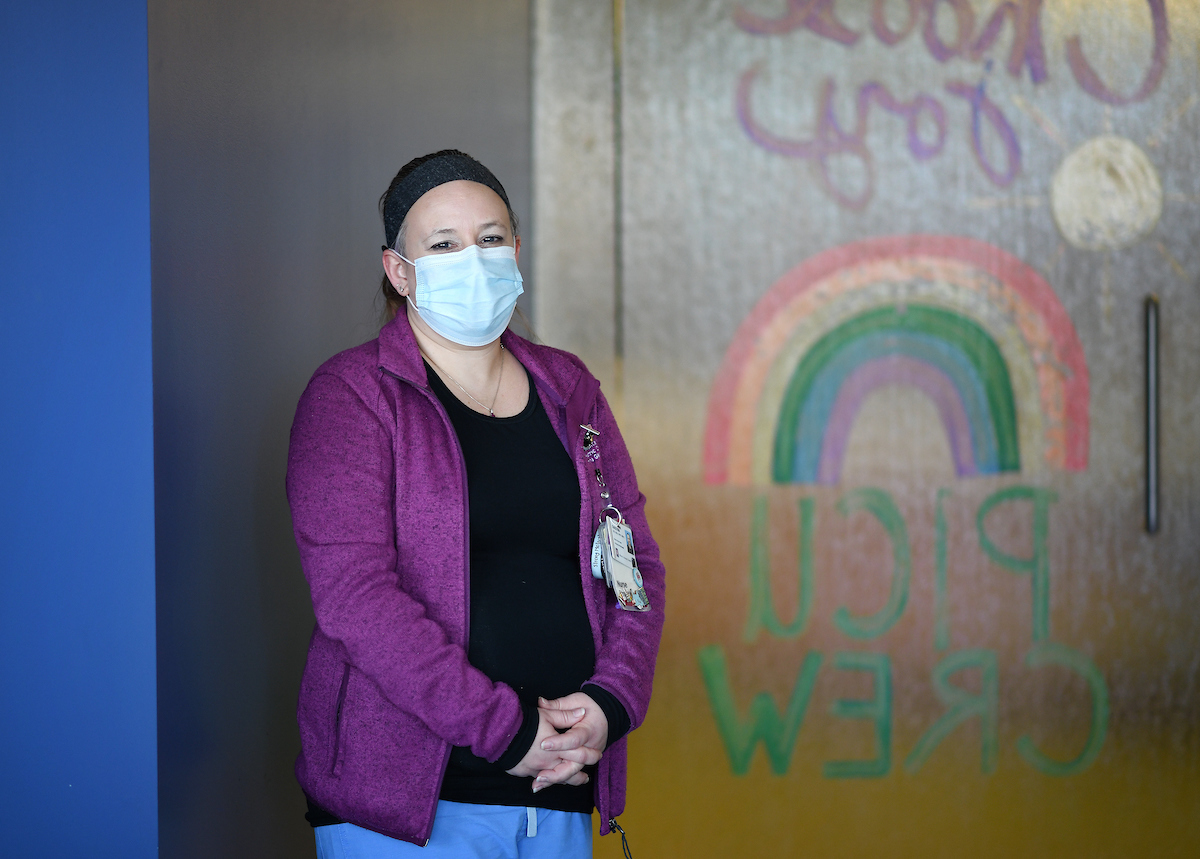 Geis, who has three sons with her husband, Mike, is closing in on 20 years with IU Health. She started as a bedside nurse in the PICU at Riley in 2001, then in 2008 moved over to IU Health Methodist Hospital to work in neuro critical care.

There, she got to work occasionally with her mom, also a nurse, who insisted that Geis refer to her as “mom” on the job. That caught on with the other nurses on the unit, who began referring to the older nurse as Mama Teri or Mama T.

By that time, Geis had earned her nurse practitioner degree, but it wasn’t until 2011 that she was able to return to the Riley PICU as an NP. It’s been her home ever since.

“As a nurse, my role was to be an advocate for my patient and do everything I could do to make them better. I still get to do those things as an NP,” she said.

But she and her colleagues work together to find the answers and the treatments and the strength to keep going even on the hardest days.

“Sure, you have some kids you never forget. Sometimes they’re the success stories and sometimes they’re the ones that didn’t turn out the way we wanted them to,” she said. “But they make you that much better as a nurse and a nurse practitioner. You can’t help but root for these kids.”

As a mom of three boys, ages 11, 7 and 3, it tugs extra hard on her heart when she meets kids the same age as her own, but she has learned how to separate her medical role from her mom role.

“One of the first things I learned as a bedside nurse was if I couldn’t leave work at work and separate it from my personal life, I wasn’t going to last as a nurse,” she said. “Now when I walk out of these doors, I stop focusing on my patients and start focusing on my family.

“I love seeing our patients get better and I wasn’t willing to give that up, so I found a way to adjust as I walk out the door,” she added. “I convert into mom, wife and friend mode.”

Of course, there are times when colleagues will have questions during her off hours, and she will jump in to help, but then she reverts back to mom mode. “I can flip back and forth pretty seamlessly.”

There was a time when Geis thought she wanted to be a pediatrician, but she worried that she wouldn’t be able to spend the time getting to know her patients. In nursing, you can, she said.

“It’s definitely not an easy profession, but it’s very rewarding.”

In her almost 20-year career, she has seen kids survive who weren’t expected to survive. She has seen others who’ve gone on to perform much better in rehab and at home than anyone thought possible.

“You don’t see that in adults so much. Kids really are so resilient. I can’t imagine working with any other population.”

Transplant patients are another tough bunch. Traditionally, they’ve spent long periods of time in the PICU, whether going through organ rejection or other complications.

“We’ve really gotten to know them and their families,” Geis said. “Now we’re at the point where we don’t see them as much anymore.”

And that’s a good thing.