Physicians as Parents: ‘I am a general pediatrician, but there were a lot of times when I just wanted to be a mom’

When Dr. Tracey Wilkinson’s daughter was born with a bilateral cleft lip and palate, the physician struggled to walk the line between medicine and mom.

IU Health physicians are trained to offer the best possible care to their patients. But what happens when a physician’s own child becomes a patient? This is the second in an occasional series about physicians as parents in the healthcare setting.

When Dr. Tracey Wilkinson and her family moved to Indiana from California in 2015, she was pregnant, starting a new job and trying to help her preschooler adjust to a new home.

That’s a pretty big ball of stress. But there was more. As Dr. Wilkinson went about establishing a care team for her pregnancy in a new city, she learned via an ultrasound that her baby had a cleft lip, a common birth defect that occurs when facial structures that are developing in an unborn baby don’t close completely, leaving a split in the upper lip.

Navigating that diagnosis and the treatment that followed, as a physician and as a mom, was tricky for many reasons, some of which Dr. Wilkinson shared with IU Health team members during a lunch-and-learn session titled Physicians as Parents. 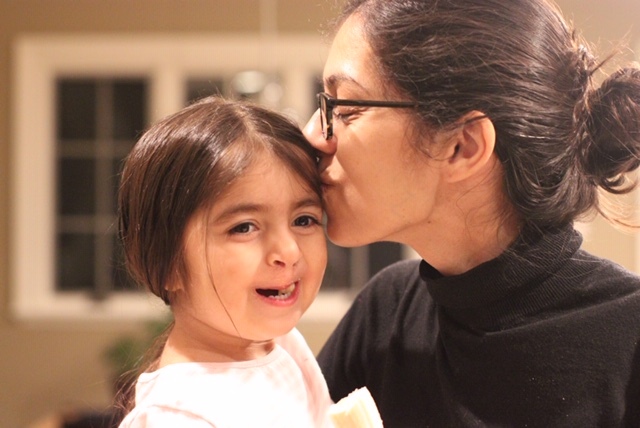 Her daughter, Eleanor, was born at IU Health Methodist Hospital in January 2016, but there was another surprise in store. When the obstetrician laid the little girl on her mother’s chest after birth, the NICU team who’d been awaiting her arrival came into the delivery room to examine her.

“We were all looking at her anatomy together,” Dr. Wilkinson said. What they saw was that Eleanor was born with a bilateral cleft lip and palate, meaning the opening was on both sides of the lip and the roof of the mouth. The ultrasound had not picked up the cleft palate definitively, nor the bilateral nature of the two.

So began more than a year of treatment, including three surgeries, and countless meetings with Eleanor’s team of healthcare specialists at Riley Hospital for Children. Because Dr. Wilkinson is a physician – she is a pediatric faculty member with IU School of Medicine and a general pediatrician at the HealthNet clinic at Methodist – it was only natural that she often slipped into that role while discussing her daughter’s case.

“The first year was intense,” she said. “It was a perfect storm where we had just moved to Indiana, so we didn’t know anybody in the medical system yet. Having a medically complex child in the first year made us get to know Riley really quickly.”

But there were times when acting as the medical interpreter for her family, including husband Huss Banai, an assistant professor in the Department of International Studies at IU Bloomington, was too much. Doctor appointments often quickly lapsed into an exchange of medical jargon, leaving Dr. Wilkinson to debrief her spouse afterward.

“I am a general pediatrician,” she said, “but there were a lot of times when I just wanted to be a mom.”

She offered this advice for medical team members: If you have a physician parent, don’t assume they want to serve in that professional role.

“It’s really empowering just to ask and acknowledge that maybe they don’t want to be that person in that moment.”

There were times when she wanted to be the medical interpreter and other times that she didn’t, but she found it hard to turn off her training.

When some members of her daughter’s care team advocated for a feeding tube to ensure Eleanor got adequate nutrition, Dr. Wilkinson pushed back.

“Those were really low moments for me,” she said. “I felt really conflicted as a mom and a pediatrician about a G-tube in a way that another person wouldn’t. I’ve seen kids with G-tubes, I take care of kids with G-tubes. This is not a novel concept for me.”

But it also wasn’t something she wanted to rush to have done. In her previous hospital work in California, she had cared for a lot of children with the same condition her daughter had, and very few of them had gastrostomy tubes, she said.

“The team and I continued to figure out how to dance together and when one of us got to lead,” she said, but she realized that some might have felt she was pushing too hard. “When you have more information as a physician, you have to figure out how to use that and how to balance that when you’re talking to patients or families.”

Her daughter never did get that G-tube, but figuring out how to feed her was challenging, Dr. Wilkinson acknowledges. They ended up putting her on a feeding stimulant, which worked wonders, she said. Today, 3-year-old Eleanor is eating OK, and she particularly loves chocolate. She speaks well, though with a slight lisp, and will be evaluated for speech therapy. Her final surgery is expected to occur when she is 8 to 10 years old.

Throughout this journey, Dr. Wilkinson continued to balance her professional skills with her parental concerns, but it wasn’t easy.

“It’s really different being on the other side as a physician,” she said, and it has changed the way she practices medicine as a general pediatrician in a primary-care clinic.

“When I make a mistake, I say so. When I’ve forgotten something, I say it, and I really let parents feel like they are just as equal a decision-maker in this conversation as I am because I’ve been on the other side, and it doesn’t always feel that great.”

In order to gain trust and build a relationship and to get patients to do what you as a physician want them to do, she said, “they have to feel like they were part of that decision.”

Katie Sutton, project manager – education senior for the Center for Physician and Advanced Provider Education at Riley, put the Physicians as Parents panel together.

The speakers, who also included Dr. Alex Lion and Dr. Jordan Huskins, navigated the delicate balance between being a parent and a physician “beautifully, thoughtfully and at times with a sense of humor and humility” (such as when Dr. Lion raised the question “Do I use the public or the staff bathroom?”), she said.

“It’s easy to forget that physicians often share the same struggles our patients and families do – both in and out of the white coat. They may feel this more acutely as they so vividly understand the complexity of a diagnosis,” Sutton said.

“I think it’s imperative that we wrap our arms around physicians and recognize their humanity, their vulnerability – to keep providing them not only with educational tools but consistently touch base with their emotional and spiritual needs.”