“People need to step up” in a pandemic, he said. So he did.

Willmore “Mac” McNeil took on the job of Riley’s interim supply chain manager at the height of the coronavirus outbreak.

His office is in the basement of Riley Hospital for Children at IU Health, but Willmore “Mac” McNeil’s profile has risen to new heights since the coronavirus began its assault on greater Indianapolis. 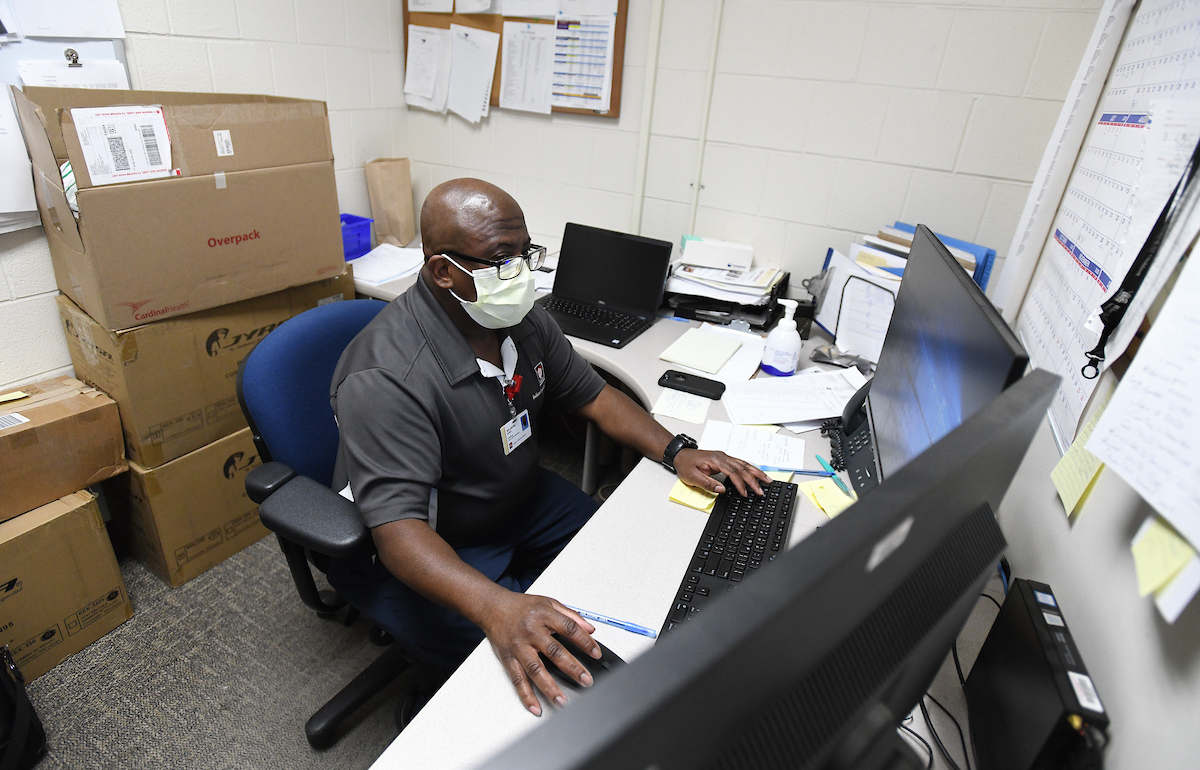 At the beginning of April, McNeil stepped up to fill the role of interim supply chain manager at Riley, responsible for everything from linens to syringes, from diapers to masks, and so much more. A “supermarket of supplies” is how he describes it.

What a time to be tasked with such a crucial job in healthcare.

“I love Riley Hospital,” the 51-year-old said. “In a time like this pandemic, people need to step up.”

McNeil knows all about stepping up. He served in the military during Desert Storm, working with the Army’s 101st Airborne Division to provide “boots, beans and bullets” – shorthand for all the supplies personnel would need on the front lines of battle. In addition, his team refueled tanks and set up evacuation hospitals.

It was good training for his current role, where he commands a team of 33 people whose job is to make sure physicians, nurses, therapists, lab workers and other Riley staff have what they need when they need it.

“I’m pretty calm under pressure,” said the veteran, who also completed a nuclear/biological/chemical weapons course in the Army, during which he had to crawl through a gas chamber and learn how to sleep in a gas mask.

McNeil, a self-described introvert, takes his job seriously, yet his gentle laugh and easygoing nature are reassuring. Riley is his life, he said. He answers his cellphone at home, “Riley Supply Chain.” He works 12-hour days, floating from his office to hospital units to the Riley library, which has been recommissioned the Team Member Safety Hub. 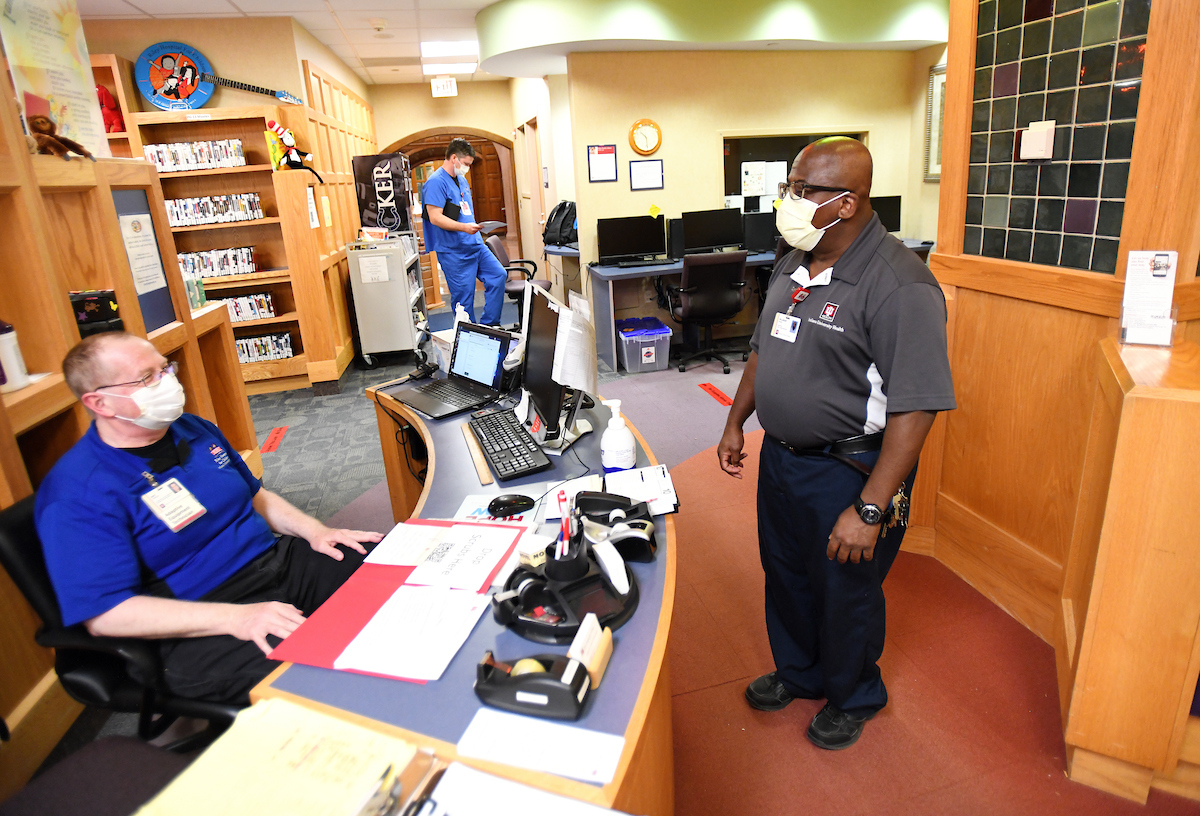 Amid all the books, team members now can pick up hospital scrubs to change into before starting their shift, then drop them off before going home. They can also get flat isolation masks and hand sanitizer refills and retrieve their sterilized N-95 masks for reuse.

It’s a one-stop shop for supplies that are in high demand for those team members caring for COVID patients in particular.

McNeil has been with Riley for seven years, and before that worked at IU Health University Hospital for three years – all of it in supply chain roles.

He served on the transformation team that orchestrated the move from the older section of Riley to Simon Family Tower. His most recent role was first-shift operations supervisor for supply chain, in charge of surgical inventory management and linens.

When the manager for supply chain retired, McNeil got the call to “audition” for his latest role.

He doesn’t regret saying yes. Riley is special to him for many reasons, but the most important one is that the hospital saved his niece’s life 13 years ago.

“They took care of her and us,” he said. “It was just amazing the way they treated my family back then.”

Ask him about the stress of working amid rapid restructuring to confront the virus, and he shrugs. “I don’t really feel the stress. It’s not an issue for me.”

What he does feel is pride. Pride in his team and everyone in the hospital – all working to improve the lives of patients. In daily huddles, they check in with each other, making sure everyone is taking care of their own health and staying as safe as possible.

“It’s still kind of unbelievable that we’re living in this time,” he said, “but I will say this about Riley leadership – those folks are top-notch. They are communicating and talking to team members, and that really goes a long way. We are a close-knit team.”

“I am so thankful to have him on our team and look forward to watching him grow.” 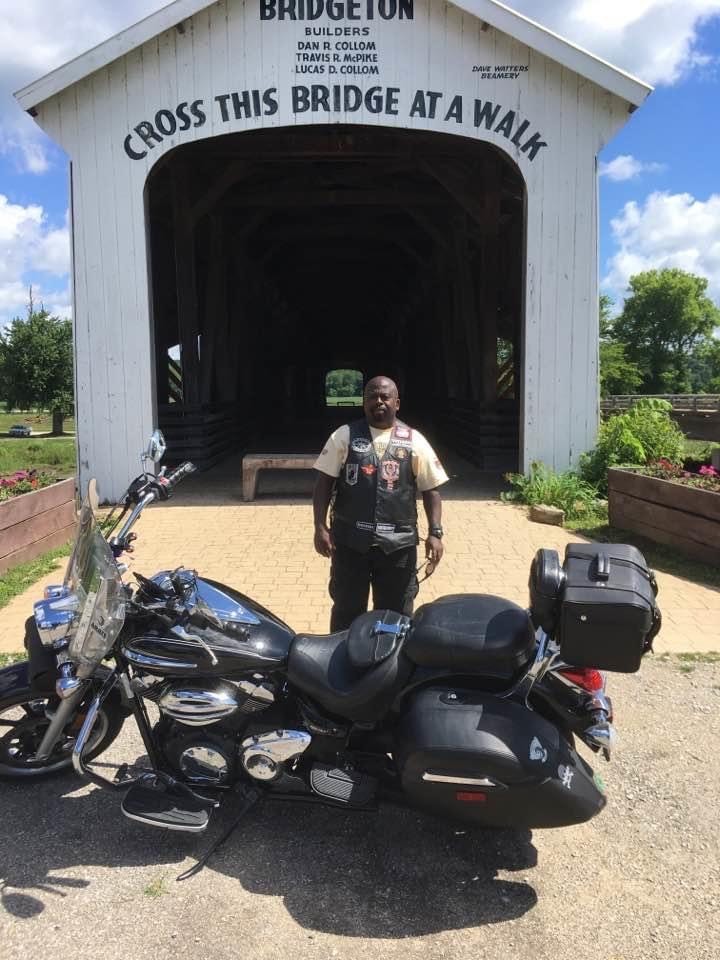 Off the job, McNeil is happiest on his Yahama 950 motorcycle, roaring down the open road. He rides often with his girlfriend, Deidra, and friends in the American Legion. The group has had to cancel two long rides already this spring, but he’s hoping he and his buddies can take a trip to Lake of the Ozarks in mid-June if stay-at-home orders are relaxed.

Until then, he and Deidra spend some of their free time at the sewing machine McNeil purchased before the pandemic struck. The father of two and grandfather of one wanted to learn how to make baby bibs and such, but sure enough, he switched over to making face masks like a lot of good-hearted people around the world.

Now he gives the masks away to family and friends, older members of the Legion and anyone who wants one.

While he credits Deidra for making most of them, the initiative is another example of McNeil’s commitment to doing what needs to be done, whether in the military or at home, no matter what the battlefield looks like.

After Desert Storm, McNeil said he learned to appreciate the little things in life – like the feel of the wind in his face on a ride and the beauty of nature all around him.

“We will get through this.”