Mysterious MIS-C typically strikes adolescents several weeks after exposure to the coronavirus. Two Indiana families are breathing easier as their boys come home from the hospital.

Multisystem Inflammatory Syndrome in Children burst onto the health scene last May, mostly in Europe at first, then in the U.S. It seems to be the body’s exaggerated response to a prior exposure to infection, specifically COVID-19, and it strikes adolescents most often.

For Wyatt Hudson (pictured above) and Richard Barnes, it meant a frightening trip to Riley Hospital for Children, lots of tests, lifesaving treatment in intensive care and, thankfully, a return to home, school and some of the activities they love.

Wyatt, 14, is an eighth-grader in Perry Township Schools in Indianapolis. Richard, 15, is a freshman in Rushville (Indiana) Consolidated Schools. Both teens were otherwise healthy before being hit by MIS-C, an illness their parents knew nothing about before it threatened their children.

Amy Hudson still remembers that helpless, terrifying feeling when she realized her son was very ill. His heart rate was dropping, his oxygen saturation levels were falling, and he was moved to Riley’s PICU on Christmas Day.

“Blindsided” is how Hudson described the scare she and her husband, Dewayne, suffered in December when their “quiet Wyatt,” then 13, began running a fever, vomiting and said his throat hurt. Then he developed a rash on his hands. He was tested for more run-of-the-mill illnesses before his pediatrician ordered blood work, then called the Hudsons to tell them to take Wyatt to Riley immediately.

That was two days before Christmas. His first symptoms began to appear three days before that.

“It was horrible, just a nightmare,” Amy Hudson said. “I knew if she was telling me to take him to Riley this was serious. We got right up there. They were fast in the ER, and that was comforting.”

MIS-C IS A PUZZLE

The challenge with MIS-C is that there is no one diagnostic test for it, so doctors have to rule things out as a matter of course.

When Richard Barnes was transferred from another hospital by ambulance to Riley early on the morning of Friday, Jan. 29, he was complaining of abdominal pain, and tests revealed swelling, so there was some concern that he was suffering appendicitis. For a couple days prior, he had an elevated temperature and was vomiting.

“We kept thinking if it was his appendix, it would be a simple procedure,” Beth Barnes said. “But they kept putting the surgery off and all these other doctors started coming in. We saw our son go downhill quickly. By that afternoon, he was on oxygen, and by Saturday he was in the ICU.”

Dr. Samina Bhumbra, associate medical director of infection prevention at Riley, saw both boys either during their in-patient stay or after discharge. She and the team at Riley have been compiling as much data as they can on the mysterious illness to help educate physicians around the state to recognize the signs of disease and establish treatment protocols.

While it’s not yet clear what causes MIS-C, most children who are diagnosed had previously tested positive for COVID-19 or were exposed to someone who had the virus. In Richard’s case, he and his parents and siblings had COVID in December. Richard’s father, Steve, had the worst case, but all recovered.

Wyatt’s parents also had the virus back in November, but neither Wyatt nor his younger sister showed any symptoms of being infected. He did, however, test positive for the antibodies later, so his parents assume he also carried the virus.

Currently, three nationwide studies are looking at different aspects of the illness, and Riley is participating in at least two of them.

In mid-May, the CDC issued a health alert in the U.S. about this new condition impacting children, specifically adolescents, who began coming into the hospital about four weeks after the peak of COVID surges with what looked like shock or sepsis.

The common denominator in their bloodwork is inflammation, along with evidence of past COVID infection, whether based on antibodies or exposure history. Additionally, two or more organs are typically affected. Often, that could be the heart, GI system, kidneys and/or skin.

Because there are similarities to Kawasaki disease (which mostly affects younger children), diagnosis can be tricky. Apart from fever and GI symptoms, Dr. Bhumbra said the next most-common sign of MIS-C is redness of the eyes and skin rash.

Other symptoms can include: irritability and decreased activity, diarrhea, vomiting, belly pain, cracked lips or a red, bumpy tongue, swollen hands and feet (sometimes with redness and peeling) and swollen lymph nodes.

Parents can look for these things, but not everyone is going to have identical symptoms, Dr. Bhumbra said.

“There’s not a single lab that can diagnose these kids, so we have to use all parts of the workup – the history, the labs and the physical findings to help come to this diagnosis,” she said.

That’s why so many specialties get involved. MIS-C affects multiple parts of the body so multiple doctors are consulting on a child’s care. They include critical care specialists, infectious disease specialists, rheumatologists, cardiologists and hospitalists.

Beth Barnes can’t count the number of doctors who came in and out of her son’s room at Riley, but she remembers when he started feeling better after he received IVIG (immunoglobulin) treatment and steroids, standard for MIS-C patients.

“He improved tremendously after the first dose,” Barnes said. “I saw my son smile and try to joke. He is very loving, ornery, loves to joke, smiles all the time. I went six days without seeing him smile.”

Richard was released on Feb. 3, five days after he was admitted to Riley. The football and baseball player returned to school the following week but continues to be seen by Riley specialists in a new outpatient clinic for MIS-C patients. The twice-monthly clinic offers a one-stop shop where kids can be seen by infectious disease, rheumatology and cardiology specialists.

Richard likely won’t be able to play baseball this spring, but his coach has already told him he will remain part of the team.

KIDS DO WELL WITH TREATMENT

For Wyatt’s parents, who lost their baby girl Kylie to a genetic disease at Riley nearly 15 years ago, returning to the hospital brought back painful memories, but Amy Hudson said Riley staff were sensitive to their fears then and now.

“I was really terrified, especially not knowing much about this MIS-C,” she said.

After spending six days in the hospital, Wyatt went home Dec. 29. In January, he celebrated a belated Christmas and his birthday with his family. He returned to school in February.

“The good thing is, despite these kids coming in as sick as they are, they generally do well with treatment,” Dr. Bhumbra said.

And the illness itself is still a rare phenomenon, she said. As of Feb. 8, there had been 2,600 cases of MIS-C reported in the United States. That compares to 3.1 million children testing positive for COVID in the U.S. since the beginning of the pandemic.

Riley has cared for about 50 patients with MIS-C since May, Dr. Bhumbra said.

“If your child is having fever and not feeling well, definitely always reach out to your physician. Don’t be afraid to reach out or take your child to the emergency room for evaluation,” she said. “This illness can be mild or severe. There’s a lot we still need to learn.”

One of the benefits of Riley serving the whole state, she added, is its focus on outreach and education, so other hospitals and pediatricians know what to look for and how to recognize and treat the illness.

The first line of defense, however, is always parents, who know their kids best.

“Watch your kids, especially if they’ve had COVID,” Beth Barnes said. “As a parent, it was very scary. We’re very lucky.”

Amy Hudson wants to be sure other parents know the signs.

“Even though it is rare, it does happen and I don’t want someone else to be so blindsided,” she said. “In that situation, I feel like every minute counts. Thank goodness Wyatt had a doctor who was aware, and thank goodness I was paying attention.” 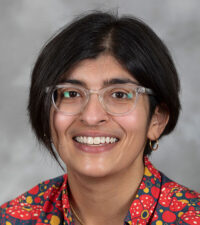