The idea of a home vent and trach tube terrified this mother, but another mom who had been through it came along to tell her she and her son could get through it.

When Shakiyla Rogers shows off pictures of her son, it’s not just to let people see how cute he is. It’s to give new parents hope.

Caiden Rogers was born at just under 25 weeks’ gestation at IU Health North Hospital. The 1-pound, 15-ounce preemie spent four months in the NICU at North and Riley Hospital for Children at IU Health, then another two months in the PICU at Riley.

When he was released from the hospital, he went home with a trach tube and ventilator to help him breathe and a feeding tube to give him nourishment. It was an anxious time for his mom, who at first resisted the idea of a tracheostomy, a surgically made hole that goes through the front of the neck into the trachea, or windpipe.

But another mom came along to help her during that difficult time – a mom who had been in Rogers’ shoes.

Courtney Espinosa’s son, Adrian, also spent many months in intensive care after his birth. He went home with the same support systems as Caiden did. That was nearly seven years ago, and today Adrian is in kindergarten, plays baseball and is learning to eat solid foods after relying on a feeding tube for the first six years of his life. His trach tube and vent are gone; the G-tube is still in, but likely not for too much longer.

Three years ago, Espinosa joined IU Health as a family support coordinator for the NICU Nest program, which provides support, information, resources and comfort to families of NICU babies.

“Courtney really helped me,” Rogers said. “It was very hard. My nurses were good, but they didn’t live that situation, so I couldn’t really make a connection with them. Having somebody to talk to who lived the same experience makes you feel more comfortable.”

Espinosa understood how conflicted Rogers was about her son going home with a trach tube and vent. “Generally in those situations, parents are scared because they don’t know how this is going to change their life. I took pictures of my son playing in a water table outside and being out and about in a stroller with his ventilator,” she said.

Like a lot of new parents faced with the trach/vent scenario, Rogers had questions about how she was going to handle the situation and how her son could live a normal life with “all of this extra stuff.”

With Espinosa’s help and the support of NICU Nest and her own mother, Rogers managed, and today Caiden is a happy 2 ½ -year-old. He no longer needs the vent or trach tube – just the feeding tube – and he weighs about 28 pounds.

So now it’s Rogers’ turn to pay it forward to other NICU parents. Shortly after her son’s birth, she took a job on the PICU floor as a unit tech/secretary, then followed her dream of going to nursing school.

“I always wanted to be a nurse, but I put it on the back burner,” she said. “I thought I didn’t have enough time for school. But after I had my son and we went home, I realized I really loved pediatric nursing, and I was pretty much a nurse at home already with all of his equipment.”

A lot of people pushed her to go back to school, including her mom, who agreed to move into Rogers’ home to help care for Caiden while Rogers worked and went to school. Graduation is now in sight at the end of the year. She’s grateful, she said, but it’s still hard. Even though her son no longer has the trach or vent, he gets sick a lot because he was a preemie. “I still cry about it, but I have a great support system. I could not have done it without them.”

Because of the gratitude she felt, Rogers wanted to do more. She want to NICU Nest Director Susan Henderson-Sears and said she remembered what Espinosa did for her and she wanted to do the same for others.

“With me having a preemie and working on the PICU, a lot of parents do ask for advice; they want to know how hard it’s going to be,” Rogers said. “Sometimes they just want to see pictures of Caiden. That can really help someone because you can get real depressed. It lifts them up a little.”

Espinosa said you can never really know the impact you have on people.

“It’s hard to gauge your impact until someone comes back later and says you made a difference. That’s why our program exists and why the parent-to-parent support is so important.”

Although her son was in the NICU at a different hospital, Espinosa connected with other parents through an online support group. “I cannot overstate how important that support is of another parent going through the same thing you are.”

She was so moved by her experience that she left her corporate job to join Riley three years ago.

“I wanted to do something that related more to my experience because I felt it had changed me so much,” she said. “I wanted to find something a little more meaningful.” 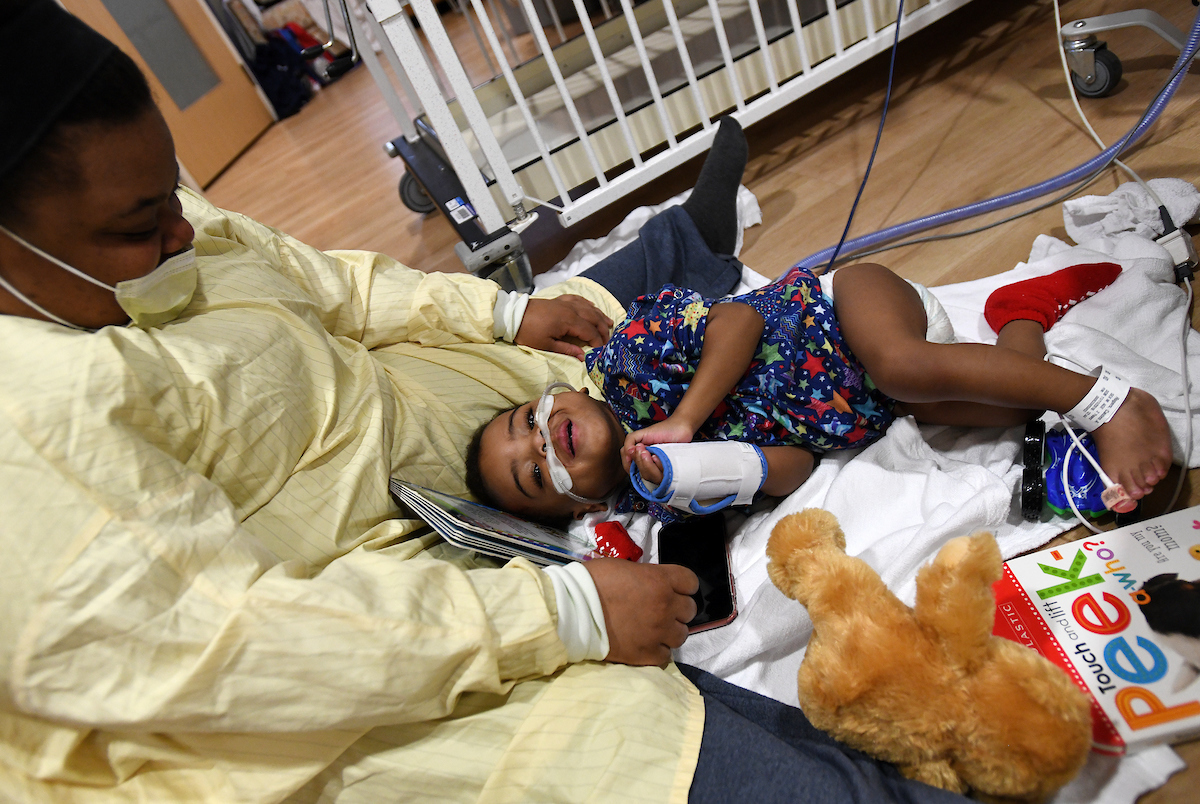 When families return to Riley and want to give back, “it affirms what we’re doing and why that parent connection is so important,” she said. “I’m super happy that NICU Nest even exists as a program at Riley. I didn’t have that when my son was in the hospital.”

Rogers said she sees herself in the parents she meets. She tells them she was once where they are, that she was scared and cried every day. And then she shows them pictures of Caiden riding his bike and sliding down a slide, a big smile on his face.

“I’m just grateful for Riley and their team of doctors and nurses who contributed to Caiden’s health and are supporting me in my nursing career.”