Paralympian visits Riley: 'I just want kids to realize their dreams aren't at the end of the street.'

Ayden Jent was born three months premature with cerebral palsy. He was treated at Riley as a little boy and came back Wednesday -- a world-renowned athlete -- to visit.

Dreams. Aydent Jent has had plenty of dreams, still does.

As a little boy with cerebral palsy, he dreamed of playing sports. So he did. Even if his legs turned inward and gave him some trouble. Even if playing baseball meant playing the outfield. 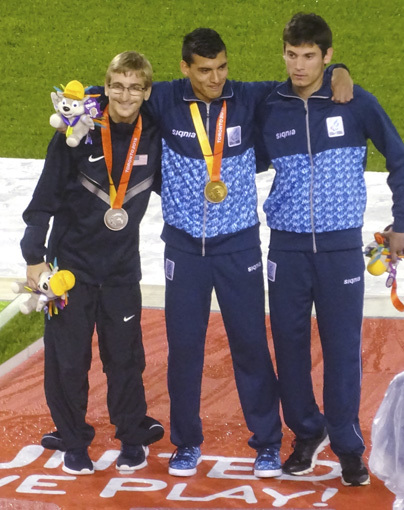 And now, at 23, graduated from college, Jent is a world-renowned sprinter who can dash 100 meters in 13.04 seconds, who can finish a 200-meter race in 27.45 seconds. He won his first national title last year and, just months ago, was in Rio competing in the Paralympics where he finished 5th in both events.

Jent's athleticism, his ability to run so fast, is uncanny. It's remarkable.

His body was the size of a dollar bill when he was born three months premature in 1993. He spent the next three months in an incubator before going home to figure out a life with cerebral palsy. He had a lot to overcome.

Dreams? He had plenty of them and he didn't let any ability or disability or impairment or whatever it's labeled stop him. Jent will follow those dreams yet again Monday all the way to California, where he will spend six months at the Paralympic training center in Chula Vista.

But before he goes there, Jent had one stop he wanted to make -- at Riley Hospital for Children at IU Health, where he was treated as a boy. He wanted to make room-to-room visits with the kids. As he did, he told them about his sprinting. He talked about his goal of getting into politics.

"I just want to help the little guys," said Jent, 23, who lives in Indianapolis. "I want kids to believe in themselves and realize their dreams aren't at the end of the street."

And with that, Jent turned his attention to the rooms where patients eagerly awaited this Paralympian.

"There are some kids who are super pumped to meet you," Melissa Sexton, Child Life Specialist & Special Events Coordinator at Riley at IU Health, told Jent.

One of them was Tremont Cissell, 15, who couldn't stop smiling as he talked with Jent. He told Jent about his dreams to play football or, if that falls through, to be a science teacher. Tremont talked about how he's good at math and science but freezes up when asked to read in front of the class.

The two finished the visit with a selfie.

Amos Burkholder could hardly believe it when Jent walked into his room at Riley. The 17-year-old is at the hospital battling Guillain-Barre syndrome, a condition where the immune system attacks nerves leading to paralysis.

"So you're an Olympian?" he asked Jent.

"Yep. Paralympics, sprinting," Jent said. "What about you?"

Amos and his dad, Christian Burkholder laughed and asked Jent more about Rio and competing.

"It's a great privilege for us to meet you," Christian Burkholder said. "We've been looking forward to it." 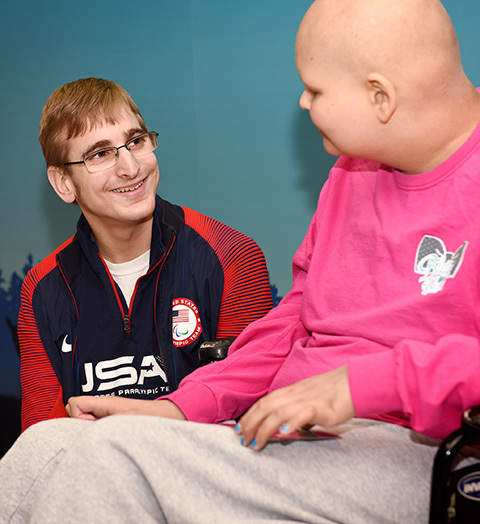 Jada Brummett greeted Jent shyly, sitting in a wheelchair. She has been at Riley for five months battling Burkitt Lymphoma.

As Jent knelt down next to her wheelchair to talk, she smiled and whispered "Awesome."

They talked and talked. Jada, who is 12, really likes art. She likes drawing and coloring and painting.

Jent pulled out a marker and a postcard he had brought filled with pictures of himself.

On the back, he wrote: "To Jada, I want to wish you all the best. Good luck in chasing your dreams."

And now to Jent's next big dream. It's been years in the making and began when he first read about Franklin Delano Roosevelt. A president in a wheelchair, a president with a disability.

"My dream is to be president," Jent said. "But I would settle for senator or governor -- and work  my way up. I just want to give back to people, to the little guys"

Dr. Karen West became the first female surgeon at Riley at IU Health 31 years ago. “It was a...

Most folks attending the Indy 500 will arrive by car, bus or even shuttle service. But not...

Riley Patient, 16, Is Singing His Way Through Bone Cancer

Austin Hewitt was lying in bed, having just finished yet another round of chemotherapy when it hit him. He should write a song about this journey. He called it "The Twelve Days of Chemo."