After Tanner Ellis was injured in an accident last spring, his care became much easier to manage last October, when Riley Hospital for Children at IU Health opened a new multidisciplinary traumatic brain injury and concussion clinic. It was patients like Ellis who inspired the creation of the clinic.

What started out as a fun afternoon of fishing nearly ended in tragedy for Danville, Indiana resident Tanner Ellis last April. The then 13-year-old was riding on the tailgate of a truck with friends when a large bug flew close to his face. For Ellis, who has autism, this was more than just startling—it was cause for panic. In his effort to swat the bug, he fell out of the truck and landed on the back of his head. He lost consciousness and stopped breathing.

To make matters worse, he wasn’t near a hospital, and it took 16 minutes for an ambulance to arrive. When Ellis’s mother, Christy LaMar, got the call that Tanner had been hurt, she tried to contain her fears in order to help her son. “I’m an EMT, so I was able to tell people how to help him breathe while they waited for the ambulance,” she says.

Ellis was rushed to Hendricks Regional Health, where a CT scan revealed the extent of his injuries: two brain hemorrhages (one in his frontal lobe and the other in the occipital lobe) and a contusion to the temporal lobe of his brain. Ellis and LaMar were then flown to Riley Hospital for Children at Indiana University Health, where doctors told LaMar that the next 12 hours would be critical for her son’s survival. It was devastating news, but she tried to stay positive. “I held onto my faith that he would be okay,” LaMar says.

Thankfully, Ellis surprised everyone and was able to sit up in bed just two days later. “His doctor was blown away,” LaMar recalls. Still, the injuries had taken a toll, particularly on Ellis’s speech, balance, memory, and concentration. He was often dizzy and nauseated, and he fatigued very easily. His eye-to-hand coordination was impaired, which made simple tasks challenging. “When I tried to help Tanner brush his teeth a week after the accident, he stuck the toothbrush in his ear,” LaMar says. But she was relieved nonetheless: “I was just glad he remembered that the toothbrush was supposed to go near his face.”

After a 10-day stay at Riley, Ellis began attending rehab there as an outpatient. While LaMar was grateful for the excellent quality of care, she worried that the therapy was focused too heavily on her son’s physical issues. “Tanner needed so many types of services to help him recover, and it was hard to oversee it all and make sure the doctors were communicating,” she says. 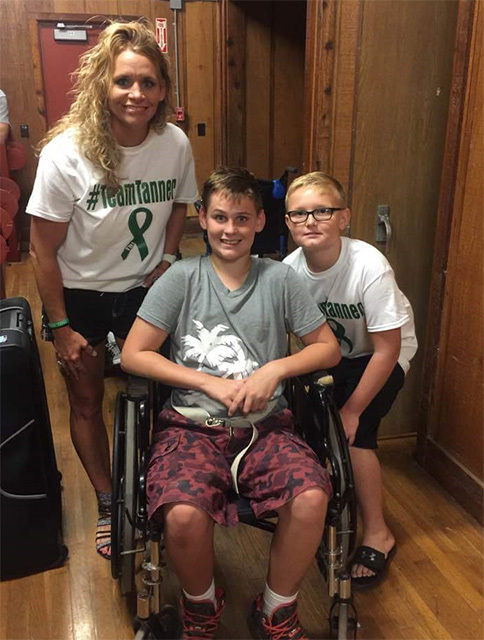 Fortunately, Ellis’s care became much easier to manage last October, when Riley Hospital for Children at IU Health opened a new multidisciplinary traumatic brain injury and concussion clinic. It was patients like Ellis who inspired the creation of the clinic, says Gloria Fritsch, RN, CPNP, a pediatric nurse practitioner and a member of the clinic’s core team. “We noticed a big need for centralized outpatient services for children with brain injuries in the pediatric neurosurgery department at Riley,” she explains. “We see kids for years after their injury to provide therapy and help them get back to school and play.”

“We are also just starting to understand the complexities of concussions – which patients are susceptible and vulnerable; why they occur; how problems develop; and what healthcare providers need to do to ensure a good outcome,” explains Andrew Jea, MD, chief of pediatric neurosurgery at Riley Hospital for Children.

What’s more, says Dr. Jea, is that attention has been focused on athletes, while younger children suffering concussions have been relatively disregarded.  “This is the reason why we put together a multidisciplinary traumatic brain injury and concussion program here at Riley, dedicated to children, adolescents, and student athletes – the first and only program of its kind in the state of Indiana.”

The program includes experts in pediatrics, physical medicine and rehabilitation, neurology, neuropsychology, and neurosurgery.  “It’s the concept of “one-stop shopping” for patients and parents to get optimal concussion care, all under the same roof, at the same time, says Dr. Jea.

LaMar also says Ellis benefitted from the unique talents of the team. “Everyone there is so knowledgeable and informative, and they really treat the whole person,” says LaMar. “Tanner recently got glasses, which will hopefully help with his headaches. I wouldn’t have even thought to get his eyes examined if the doctors there hadn’t suggested it.”

Though Ellis has only been a patient at the clinic for a few months, LaMar says she can already see a difference in her son. “Gloria has been phenomenal,” she says. “She’s so encouraging with him, but also realistic. Tanner is still very determined and strong, and he wants to do everything he did before. He doesn’t quite realize he has a disability and has to think about his safety.”

Though Ellis’s recovery will take a long time LaMar takes comfort knowing he’s in good hands. “Thanks to the clinic, I can now see that Tanner is on a path headed in the right direction,” she says.