One tiny heart, one giant blessing

Their baby girl is alive today because of another family’s heartbreaking decision.

With her bright orange toenails, her leopard print pants and her playful pigtails, Sydney Deaver looks ready for a day at the zoo or a baby playdate.

Maybe not today, but soon. 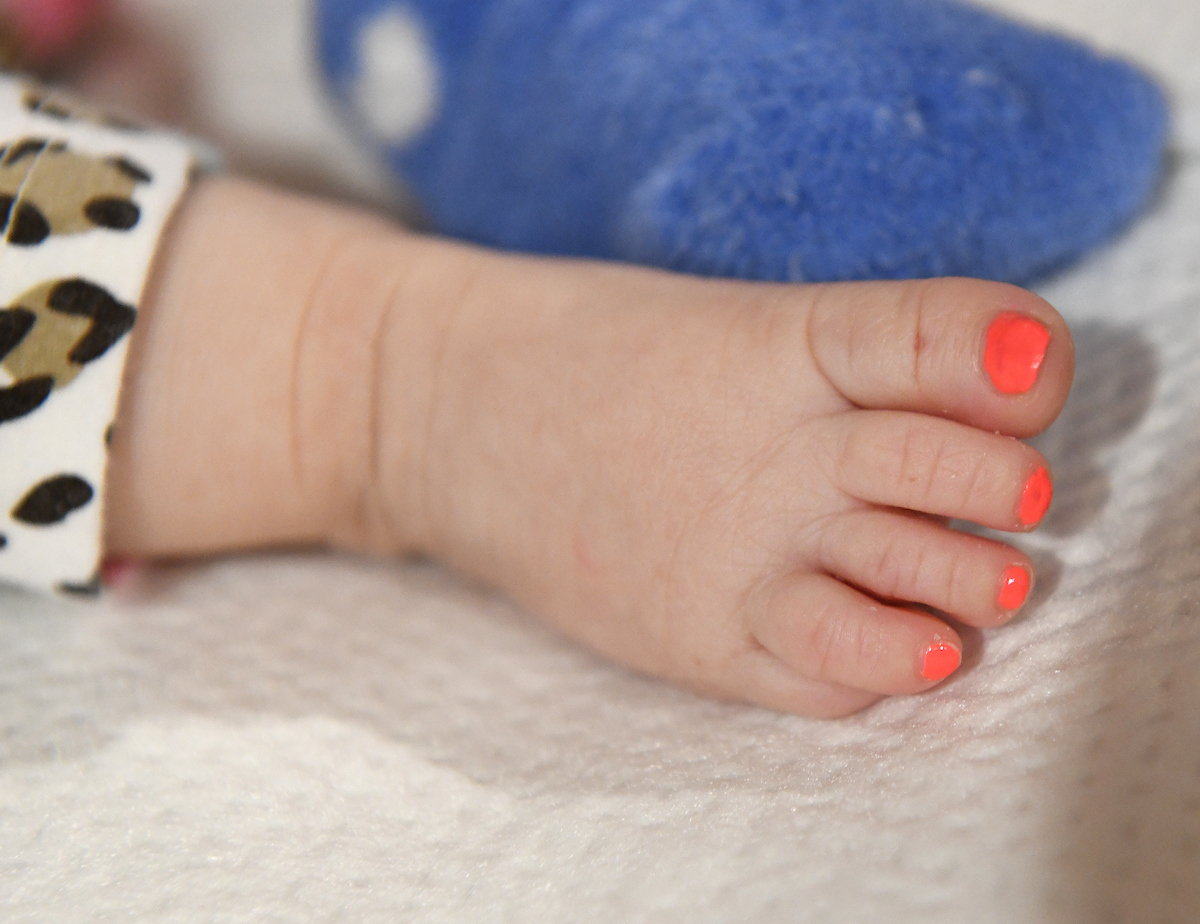 Seven-month-old Sydney lies in a hospital bed at Riley Hospital for Children, recovering from a heart transplant. It’s been her home for five months, but not for much longer. Her mom expects to be able to finally take her home this week.

As Sydney watches a children’s video in her crib, Ashley Deaver strokes her baby’s dark hair and pink cheeks. This is her world now. She is at her daughter’s bedside from 8:30 in the morning until 8:30 in the evening every day, watching her, holding her, reading to her, singing to her.

“I couldn’t imagine myself being anywhere else. Being here and seeing her little smiley face just makes me so happy.”

It’s been quite the journey for Ashley and David Deaver, who had no reason to suspect the birth of their first child would be anything but normal.

Ashley and David actually didn’t plan to have any kids. They’d been together 15 years and were used to doing their own thing.

“We didn’t try to get pregnant. She was a surprise,” Ashley said.

A happy surprise for the couple, once they absorbed the news. But for nine months it was still somewhat of an abstract concept.

“Even though I was getting bigger and bigger, up until she was born, it didn’t seem real.”

Then all of the sudden, “this is really happening.”

Ashley delivered Sydney via cesarean section at a northside hospital Nov. 24, 2018. The little girl was born full-term, but within 12 hours her sugar and oxygen levels had fallen and she developed jaundice. Doctors also detected a heart murmur.

She was moved to that hospital’s NICU for 11 days, before being released to go home. The heart murmur, they were told, was nothing to worry about. Often, murmurs don’t require treatment.

For two months, the Deavers cared for their little girl at home. She was fussy and suffered digestive problems, which the couple assumed was due to colic. They tried different formulas, kept the pediatrician on speed dial and hoped she would outgrow this stage. But she got worse.

It was at her two-month checkup when the couple learned that their world was about to change. They just didn’t know how much. 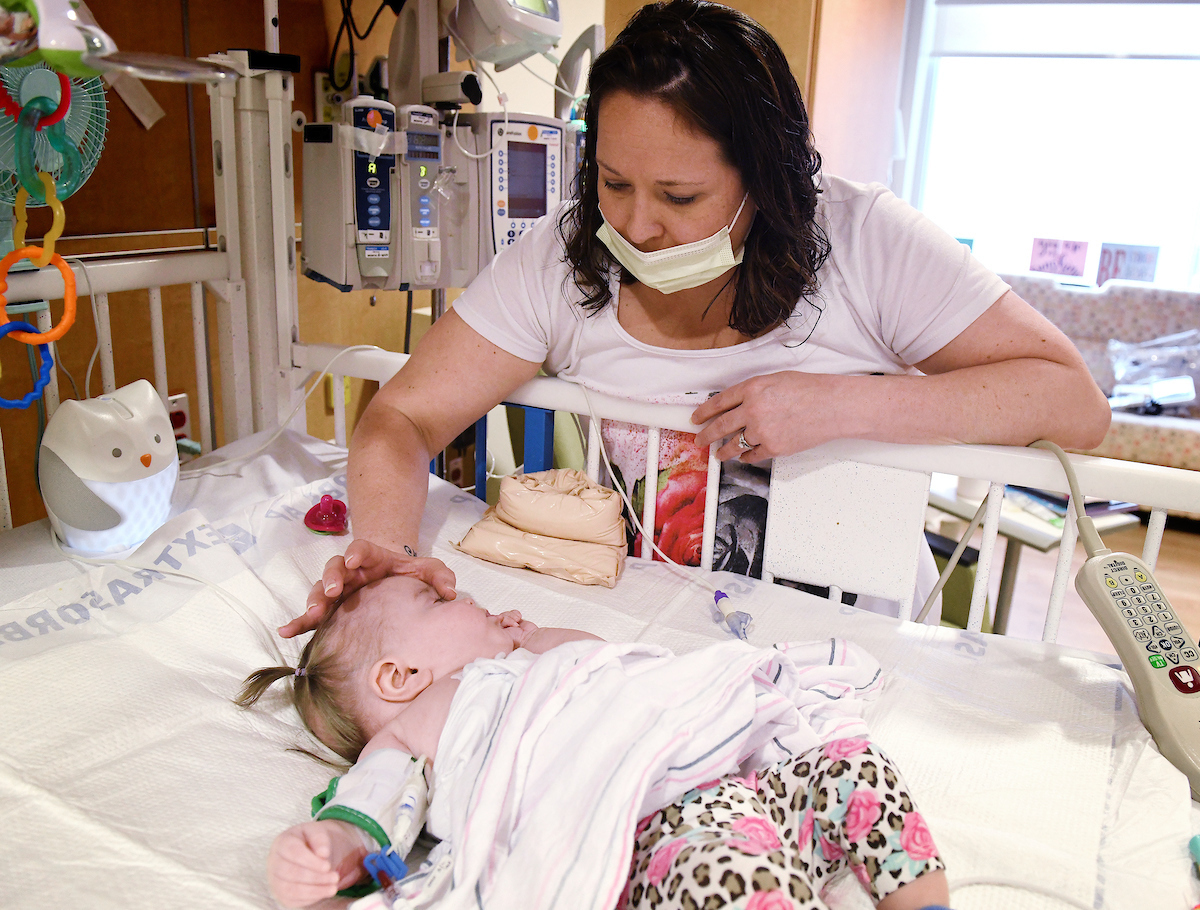 Sydney’s pediatrician noted that her heart murmur had gotten louder since a previous appointment a few weeks earlier. The doctor scheduled an echocardiogram, a sonogram of the heart, for the next day, Feb. 13.

Ashley took her daughter for the test and had dropped her back off at the babysitter so she could return to her job with a mortgage company in Pendleton. She had barely sat back down at her desk when her husband called and said they had to go to Riley – now.

“I’m in a panic,” Ashley said as she recalled that day five months ago. “I left to pick her up, called my husband, called my mom. I pretty much cried the whole way there.”

Sydney was admitted that day, but it was a heart catheterization nine days later that led doctors to determine she needed a transplant. She was moved to the cardiovascular intensive care unit Feb. 24, where she would wait nearly two months for a heart to become available.

Genetic testing revealed that Sydney had Noonan syndrome, a disorder that can cause heart defects in addition to preventing normal development in various parts of the body. She also was diagnosed with cardiomyopathy and coronary stenosis.

How do you process the idea that your newborn needs a new heart to survive?

“It was a lot,” Ashley said. “My husband and I went to dinner that night, and we both started crying at the table. We didn’t know what it entailed, how long it would take. We just knew she had to have one. It was very scary.”

Looking down at her daughter today, Ashley has a hard time getting her head around everything that has happened.

Sydney was added to the transplant list March 15, but it wasn’t until May 6 when they got the call that a heart was available. It was not a moment too soon.

As the transplant coordinator delivered the news, Ashley and David calmly listened but within a minute, both were in tears.

“We both started balling our eyes out because at that point it was getting very close to her possibly not making it,” Ashley said. “And every day was really hard because she was sedated and on so many medications.”

Dr. Mark Turrentine performed the transplant surgery May 7, just days before Mother’s Day. The idea that another family made the decision to donate their child’s heart so that another baby might live is more than Ashley can process.

“I’m lost for words. It gives me goosebumps just thinking about it,” she said. “I’m so thankful that this family was able to do that. Losing someone that close to them … I don’t know how to describe it other than this,” she said, wiping away tears.

She is grateful also to family, friends, co-workers and Riley care team members for the tremendous support the family has received over these many months.

People like CVICU nurse Emily Wilcoxon, who has been a constant presence in Sydney’s life since she arrived at Riley. So much so that the family has said Sydney will know her as Auntie Emily as she grows.

And others like music therapist Jenny Kaufman, who has brought music into Sydney’s life since those early days when the little girl was too sedated even to respond.

“Sydney was so sick before; she needed a heart,” Kaufman said during a recent visit to her room. When that heart came, Kaufman came by to play a song as the medical team came to take Sydney into surgery.

“There were so many emotions in that room,” she said.

Told that Sydney might be able to go home this week, the Deavers are equal parts excited and terrified.

“I’m happy, nervous, a little overwhelmed,” Ashley said. “But we’re ready to be at home. It’s going to be like starting over again. She was only two and a half months old when she was admitted here.” 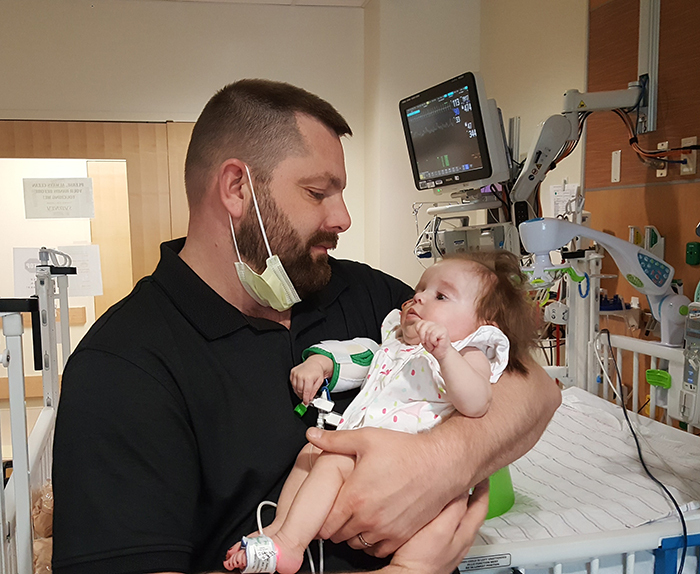 Sydney’s room is the same as she left it, though at two months she was still sleeping in a bassinet in her parents’ room. She’s ready for her big-girl crib now, her mom said.

There is a new toy waiting for her – a Power Wheels Maserati ride-on car that the couple bought before learning their daughter would need a transplant.

“Her dad and I are going to have just as much fun as she is with it,” Ashley said. “She’s going to be full-time fancy.”

As her daughter squirms in her hospital bed, she kicks off her tiny socks to reveal 10 perfect toes with a dab of orange polish on each nail. Ashley gave her daughter a mini pedicure as the little girl slept.

Now, she whispers to her: “Hi beautiful, you’re OK, you can go back to sleep.”