One day he was playing in the snow; a week later, he could barely move

Kindergartner struck down by Guillain-Barré syndrome learns to walk again

After more than a month in the hospital, 5-year-old Brysen Mills couldn’t wait to bust out and head home to Paris, Illinois. Home to his big brothers, to his Power Rangers and to his two dogs, Gage and Roxie.

The kindergartner rang the victory bell Tuesday at Riley Hospital for Children, signifying the end of his treatment for Guillain-Barré syndrome, a rare but serious autoimmune disorder in which the immune system attacks healthy nerve cells.

Brysen, normally an active, fun-loving kid, came into Riley unable to sit up or walk on his own. He couldn’t even bear to be touched on his legs. He was in agony, and his parents were distraught, anxious to find out what had happened so suddenly to rob their son of his ability to move.

Josh and Lesley Mills’ youngest son was playing in the snow one weekend in early January, and a few days later, he was complaining that his legs hurt. The pain quickly began to spread. The boy’s pediatrician suspected meningitis, but tests were inconclusive.

All of this was playing out as Josh Mills was on the other side of the world. A member of the 181st Intelligence Wing of the Indiana Air National Guard, he was deployed in Qatar, near Saudi Arabia. He had less than a week left on his six-month tour, but with help from the Red Cross, he returned home to his family Jan. 20.

By then, however, Brysen had been taken by ambulance to Riley, where they did an MRI and a spinal tap to try to identify the source of his nerve problems. When Guillain-Barré was confirmed, Brysen was started on IVIG (intravenous immunoglobulin) treatment, supplying a replacement dose of antibodies to fight infection.

“His body was attacking itself,” Josh Mills said. “He got a virus in his body and his antibodies attacked his own nervous system.”

The condition, which frequently follows a mild viral infection, leads to weakness and numbness and can eventually cause paralysis. It affects about 1 in 100,000 people in the U.S.

Brysen was so weak that doctors were discussing putting him on a ventilator to help him breathe. But by the next morning, it appeared the IVIG was working, and a few days later he was able to begin the intense rehab that would allow him to regain his strength and muscle movement.

It wasn’t easy. When Brysen first started rehab with Riley physical therapist Kristina Davey, he couldn’t sit up without support, not to mention walk.

“He was so bent up, his knees and hips up tight in a ball, and he hated to be extended because it hurt. We’ve been working a lot on that,” she said. “Now he’s sitting on his own, he’s putting weight through his legs. He refused to stand before. Now we’re walking.”

Brysen had three hours of occupational and physical therapy a day five days a week, plus a weekend session, for two weeks. Every day, either his mother or father was there, working side-by-side with the therapist, cajoling Brysen to bounce the ball, kick the ball, tap his toes, stand tall, straighten his legs and walk with assistance.

He was alternately cooperative and obstinate, as kids can be. But he kept at it. Once, when his dad turned away for a second, Brysen stood up on his own and took two steps toward Josh, who grabbed him and held him tight.

“What are you doing, buddy? Let’s not get up and walk unless somebody’s there to help you,” Josh said calmly as Brysen tucked his head into his dad’s chest. “We can snuggle tonight, I promise.”

As they hugged, Brysen said the “stingers” (whiskers) on his dad’s unshaven face were poking him. “I still love you, daddy.”

Back in his hospital room, a week before he was released, Brysen rolled around in his wheelchair, alternately looking out the window, opening cabinets, looking for toys and asking for a snack. 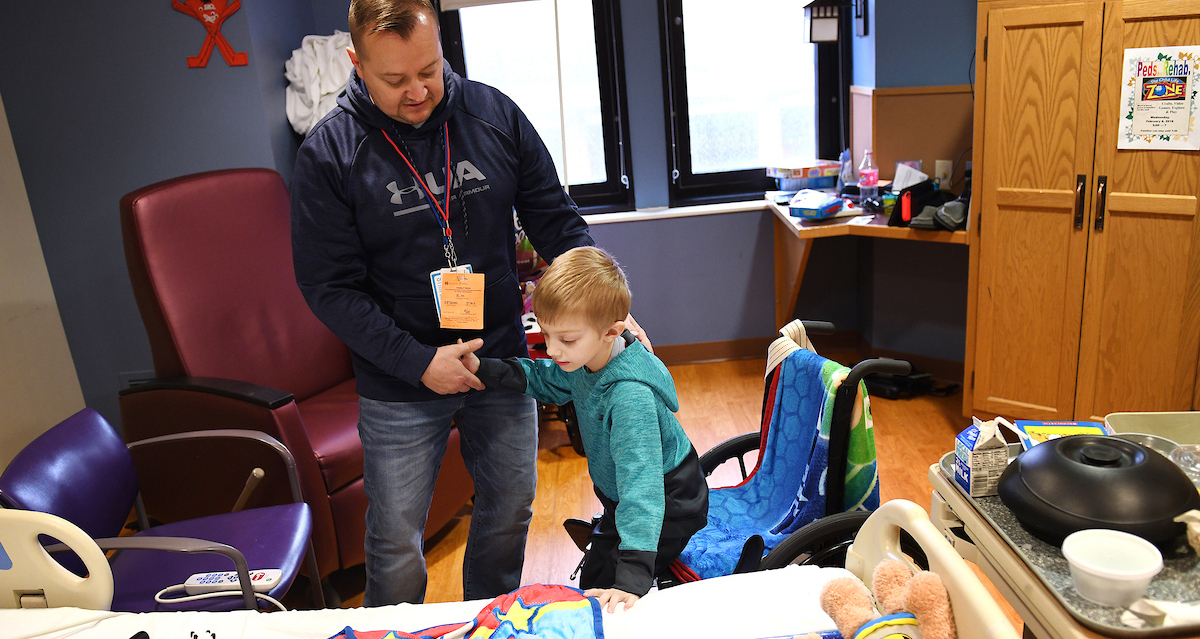 As Josh got him settled back into bed, he spoke about his son’s “warrior spirit” and the tremendous support the family has received from their community.

And then the tears started to spring from his eyes.

“These are tears of joy,” he said. “I admire his tenacity, his resilience. He’s my little warrior.”

In the same breath, he praised his wife for her calm, steady presence throughout the ordeal. “She was my rock. She is the reason I’m able to be strong for him.”

A day after their return home, Lesley Mills said their nearly two-hour car ride was joyous for all. Brysen couldn’t wait to get home and see his older brothers, she said. Because of flu restrictions, they hadn’t been able to visit Brysen in the hospital.

The reunion was emotional, Lesley said. “He didn’t want to stop hugging them. It was so nice to have all five of us under the same roof together. It had been seven months since we (were) all together.”

Brysen will continue outpatient physical therapy at home, and he will return to his kindergarten class this week.