NICU graduation day is here for one twin

Born at 24 weeks, she spent 157 days in the NICU, always with her identical twin in an adjacent room. Now one of the mono-mono twins is going home, and the other could follow by Christmas.

After five long months in the hospital, Monday was going-home day for little Lena Rae Drew. 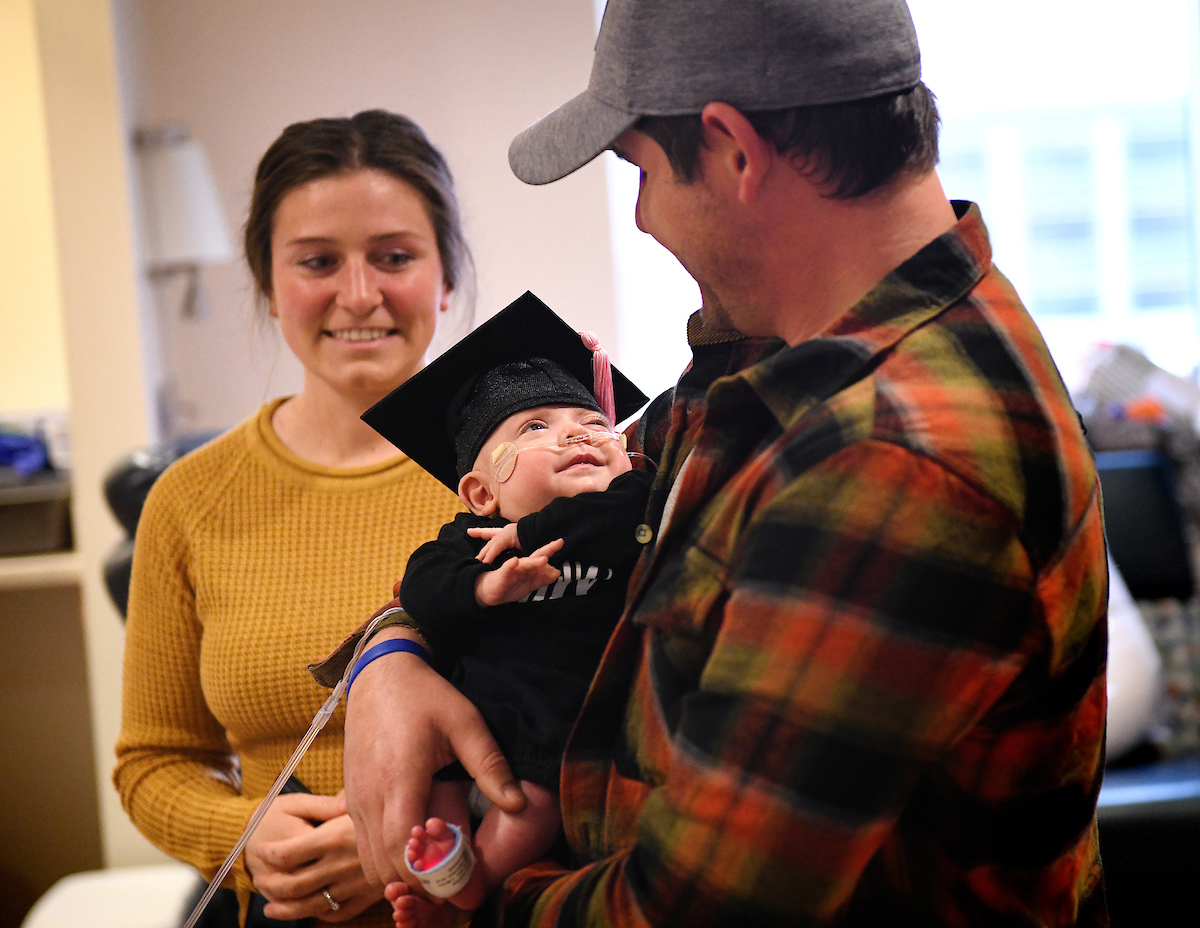 Dressed in a NICU grad outfit with a tiny matching graduation cap decorated by one of her favorite nurses, she patiently waited in her baby rocker before being bundled into a car seat for her first trip home to southern Indiana.

There was only one thing missing from this joyous moment at Riley Hospital for Children. And it was not a thing at all. It was another tiny person – Lena’s twin, Delaney.

As they have for the past five months, parents Eric and Emma Drew of Petersburg, Indiana, divided their time between their two girls in adjacent rooms at Riley. But this time was different. This time, one of the girls was going home, while the other would stay behind for further treatment.

It’s a position neither parent wanted to be in, but they are rejoicing in the fact that finally they can bring at least one of the twins home to the nursery that’s been waiting for them. 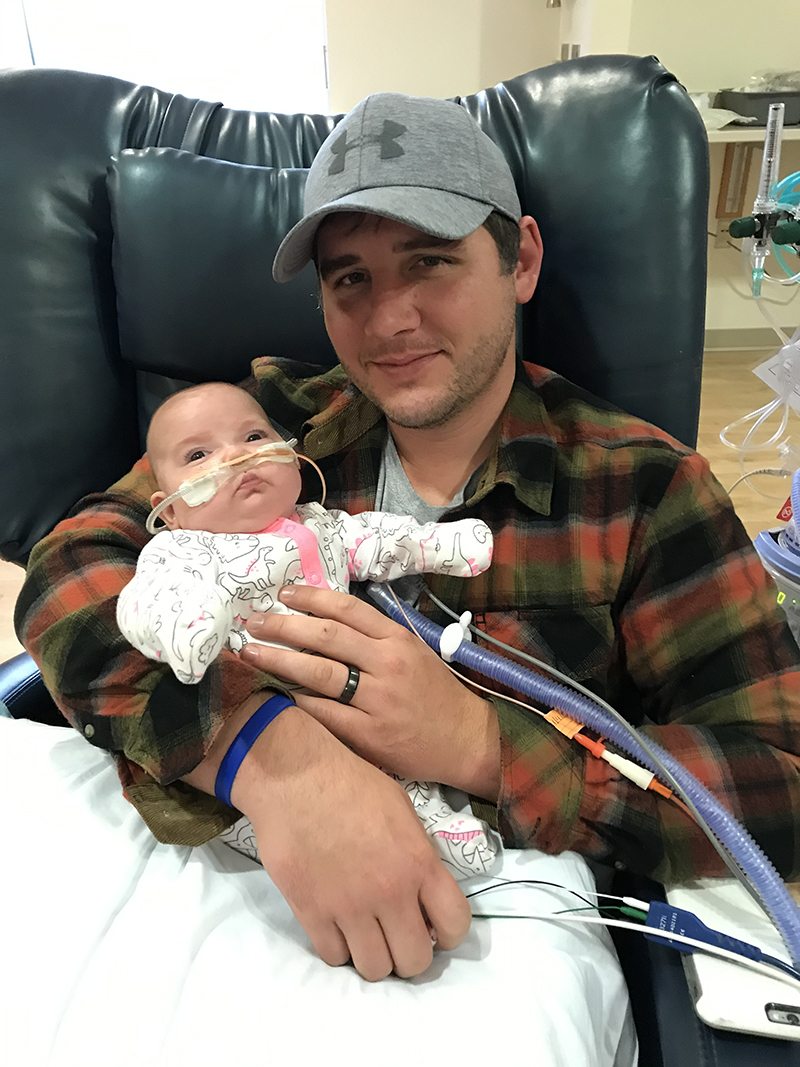 “The more we learn, the more we realize we’re lucky both of them even made it and are doing as well as they are,” Emma said, as she looked in on Delaney, who was sleeping in her father’s arms.

Both girls were rushed to Riley from an Evansville hospital shortly after their premature birth last June. Lena and Delaney were delivered by emergency C-section at 24 weeks and six days. The twins were identified as mono-mono twins early in the pregnancy.

Monoamniotic, or mono-mono, twins occur when a single fertilized egg results in identical twins sharing a common placenta and amniotic sac. It’s an anomaly that occurs in just 1% of identical twins and less than 0.1% of all pregnancies.

In early pregnancy and up to 24 weeks, mono-mono twins have a survival rate of 50%.

“We knew that there was a high chance that one or both wouldn’t make it even before birth,” Emma said. “And then after birth, with them coming so early, it’s tough.”

But that was back in July, when the girls were struggling to breathe and gain weight. At birth, each baby weighed less than 2 pounds. Now, Lena weighs 9 pounds, 8 ounces, and Delaney weighs 9 pounds, 13 ounces.

The couple found out before the birth that their babies also had twin to twin transfusion syndrome, meaning one twin – in this case Lena – was in effect stealing blood and nutrients from her sister, putting Delaney at risk. Left untreated, the survival rate for TTTS twins is 10-15%.

That’s why the girls were delivered prematurely – to save at least one if not both of their lives.

In their time at the hospital, Emma says her daughters’ personalities have flopped.

“Lena used to be the chill one, and Delaney was wild. Now it’s the opposite. Delaney has finally gotten cuddly.”

Both girls are growing. Delaney is actually a few ounces heavier than Lena, but she still is dependent on respiratory support and takes feedings through a tube. Lena is on a very small amount of oxygen but is taking a bottle like a champ. 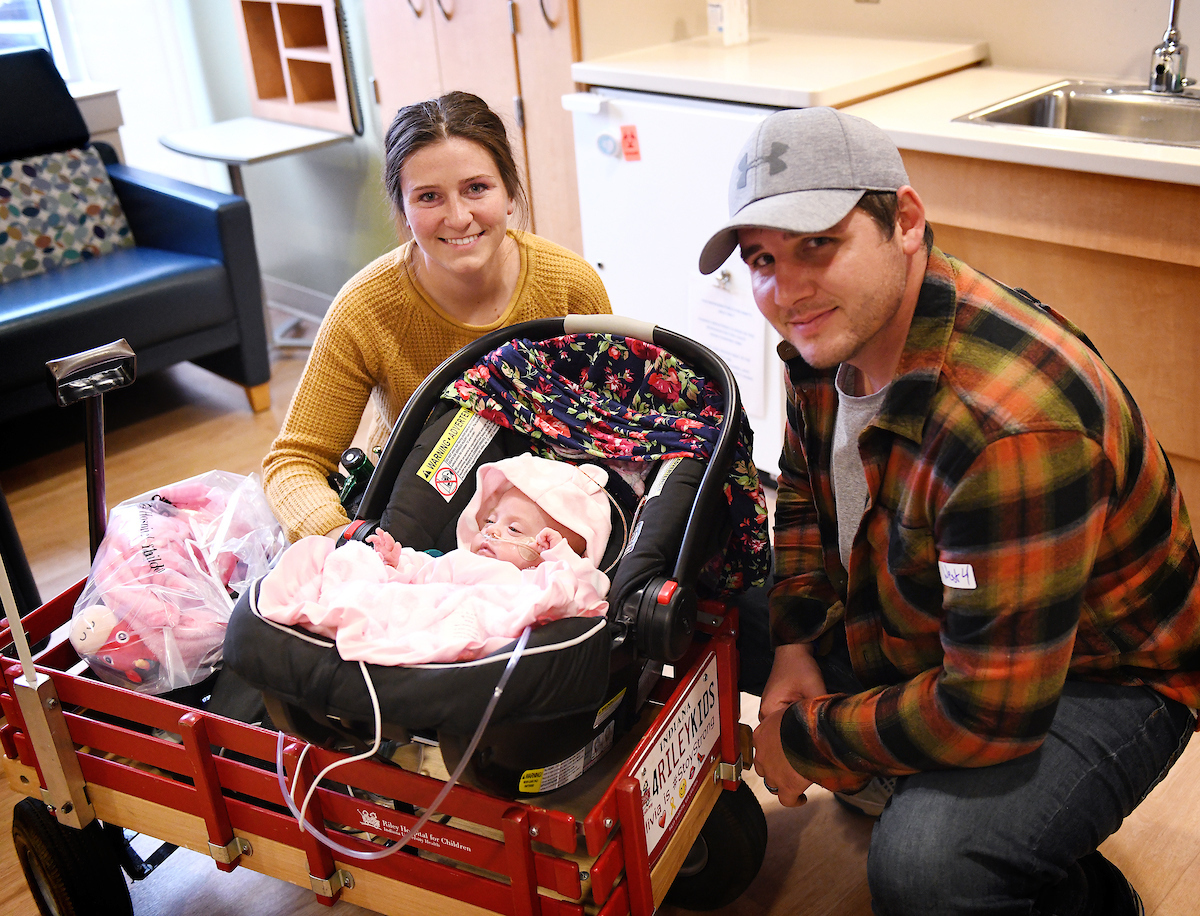 Eric and Emma are getting one baby home in time for Thanksgiving and hope to get the other home for Christmas, but they understand it might take Delaney a little longer.

Their original goal was to have both girls home by their original due date, Sept. 21. They didn’t make that milestone, but they still feel remarkably lucky.

Emma will stay home with Lena through the week, while Eric works, then both will return to Riley on the weekends to stay with Delaney. Family will fill in for them at the hospital during the week.

“She’s got five or six primary nurses, so there’s always going to be someone here that knows her,” Emma said. “She’s well-loved and will be well taken care of. It’ll be tough. We feel bad already, but hopefully she’ll be home soon.”

Dr. David Boyle, neonatologist and co-medical director for Riley Maternity Health, has cared for both babies on and off during their time at Riley. A father of now-grown premature quadruplets himself, he came by to see Lena before she was discharged.

Dr. Boyle said the Riley team, including doctors, nurses, respiratory therapists and other specialists, has done an outstanding job, as have the parents and their extended family, who have been by both girls’ sides from the beginning.

And while the twins’ condition was extremely rare, “We have experience taking care of extremely premature babies with the type of complications that Lena and Delaney have,” he said. “We have an incredible team here.”

As he prepared to take one daughter home and say goodbye to the other, Eric said both of the twins are “big miracles.”

The day before Lena went home, the parents were able to put her and Delaney into the same crib for a short time. Wearing onesies that said “Double” on one and “Trouble” on the other, they locked arms, and Lena started sucking on her sister’s head. Delaney didn’t seem to mind.

“They’re a little more embracing of each other now,” Emma said. “We finally feel like we’re getting to the end, and hopefully Delaney can come home by Christmas. That would be a great present.”