When doctors told 18-year-old Chase Smith he had just months to live, he knew what he wanted to do first – marry the love of his life. Now the couple want to inspire others with their story of faith.

When you’re young and in love, the world can be a pretty magical place. That was true for Chase Smith and Sadie Mills a few months ago when the high school sweethearts pictured their future together.

The champion swimmer (him) and diver (her) planned to continue their athletic careers in college, then eventually marry and start a family.

The magic and the miracles look different now – ever since Chase got word that the cancer he has fought for six years was back with a vengeance.

But the love is constant.

The hope is eternal.

And the faith is extraordinary.

This is a story of love, yes. But not just the love between a young man and his new bride. It’s the love they share for God and all he has given them, in spite of the cancer.

“I feel blessed 100 percent.” Chase said while on his way to a follow-up appointment at Riley Hospital for Children at IU Health this week.

“A lot of people in my situation might think they’re being cheated, but the way I look at it is if I have to go through all of this to point back to God, that’s what I have to do. For him to use me in this way is a blessing.”

His “situation” is a tough one. Doctors have given him three to five months to live. The Ewing’s sarcoma that was first diagnosed in Chase days after his 13th birthday returned for the fourth or fifth time – just weeks before he was to graduate from Indian Creek High School in Trafalgar, Indiana.

The cancer had metastasized, spreading to his brain, lung, shoulder, back, hip. There was little more that could be done medically to halt the tumors. 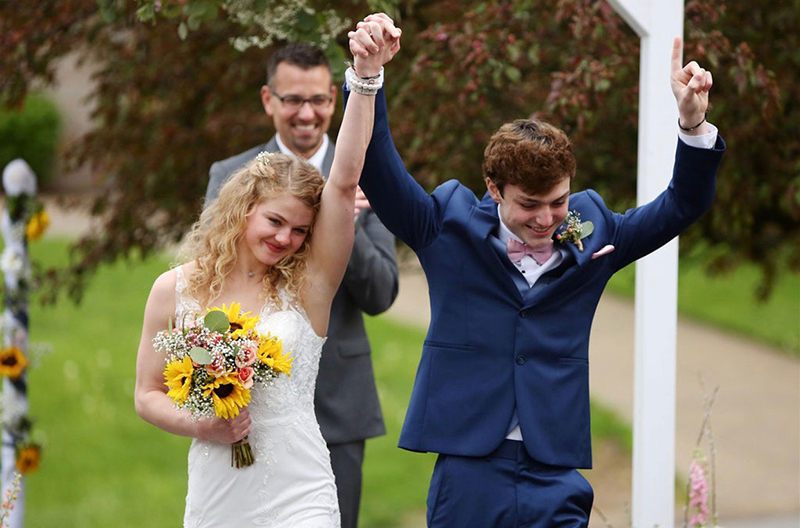 But Chase had more to do, starting with marrying the love of his young life – Sadie. On the same day he learned about his relapse, he told his mom, Kelli Smith, he wanted to marry Sadie. She and her husband, Brad, invited Sadie’s parents over to their home so Chase could ask Sadie’s dad for his daughter’s hand.

And so, with help from their families, formal wear shops, jewelers, friends and their church, the 18-year-olds pulled together a wedding in just four days – amid a pandemic.

“So many doors opened so fast and so easily for this,” Kelli Smith said. “It was beautiful.”

Sadie in her white dress, Chase in his blue tuxedo. Both positively glowing.

“Sadie means the world to me,” Chase said. “I can’t put it into words.”

With her by his side, he feels stronger. Together, they have shared their story with local and national media, not to bring attention to themselves but to be a witness to their faith, they say.

“At the start of relapse, I was hesitant to talk to a lot of people. I had to sit down and think to myself what my real message and purpose was for the rest of my life,” Chase said.

His answer was clear.

“I genuinely feel that God put me on this Earth and gave me this platform to be able to share the love that he can spread, to share what’s possible with his love.”

Sadie, though admitting the media attention is strange, is on board, saying she and Chase are on a mission to reach as many people as possible.

“We’re trusting in God through this whole process,” she said.

The Smiths are a family of educators. Kelli Smith is a literacy specialist at Indian Creek Elementary. Her husband, Brad, is the high school swim coach and teaches eighth-grade health and physical education. Their daughter, Kaitlin, is a fifth-grade teacher at Indian Creek.

Chase, however, had no plans to follow in their footsteps, though his mom believes he would be a wonderful teacher. He talked about taking business classes in school and maybe running his own company someday. More recently, he hinted at exploring ministry work, but he wants to keep those ideas to himself for now. 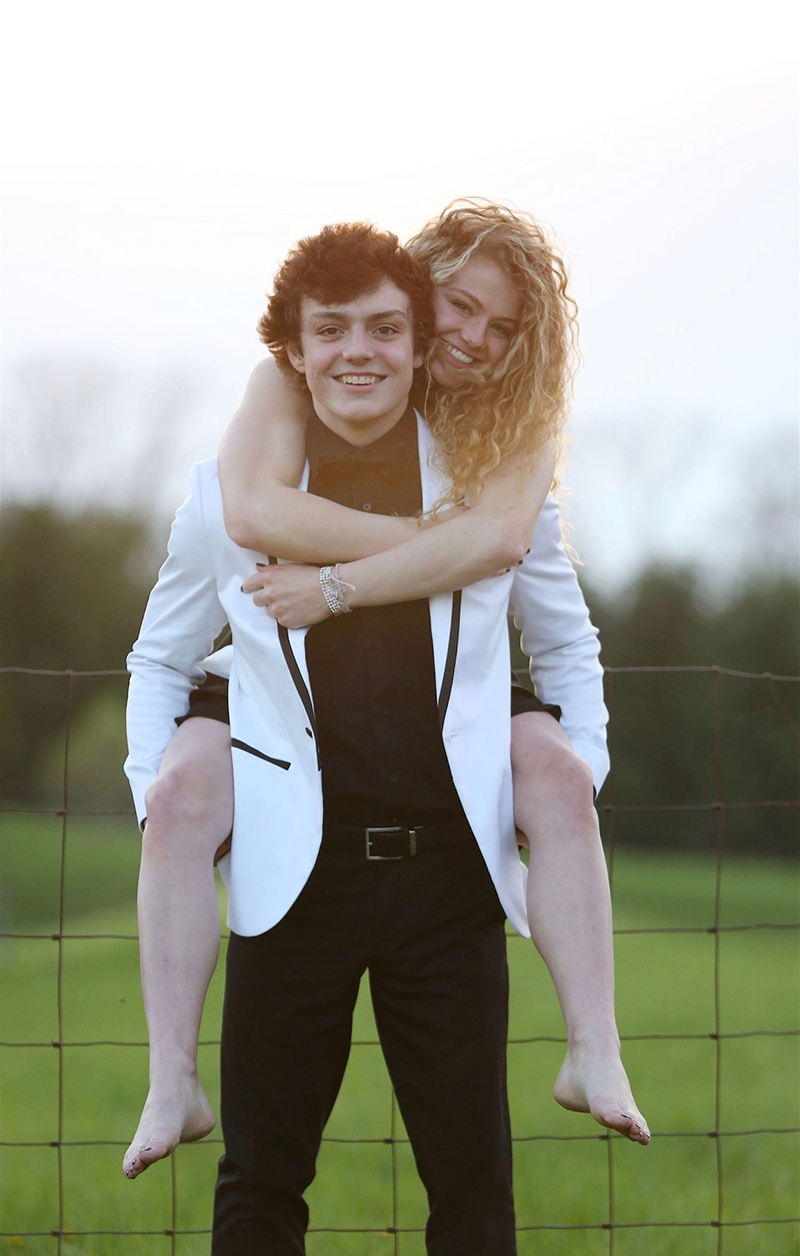 These past six years have not been easy for anyone in the family, but Chase continued to compete at a high level in swimming until the pain and the procedures got the best of him.

Kelli believes his excellent physical conditioning and mental toughness helped him beat back the cancer for as long as he could. Meanwhile, she finds peace in the many small miracles she has witnessed, all of them providing a measure of hope.

The ultimate miracle for her would be complete healing for her son, but she accepts that it might not happen. Still, her faith holds strong.

“I believe God can use Chase’s story to the fullest without having to heal him. I don’t think he wants Chase to be in pain and to die, but I also know he can take something as yucky as me losing Chase and turn it into something amazing that would bring him so much glory.”

Like mama bears everywhere, Kelli is fiercely protective of her son and makes sure he is surrounded by people who will fight for him. People like Dr. Melissa Bear, his oncologist at Riley.

“Dr. Bear has been there from the beginning … and it could not be a better fit. She is amazing with Chase. He can be a hard kid if he doesn’t trust you, but they’ve had a great bond,” Kelli said.

The family also has worked closely with Dr. Kari Kendall and the palliative care team at Riley, whose clinicians have been able to ease Chase’s fears about pain medication and living with a terminal disease.

Dr. Kendall, who said Chase has faced his illness with “extraordinary strength and grace,” understands that people often assume palliative care is all about dying. 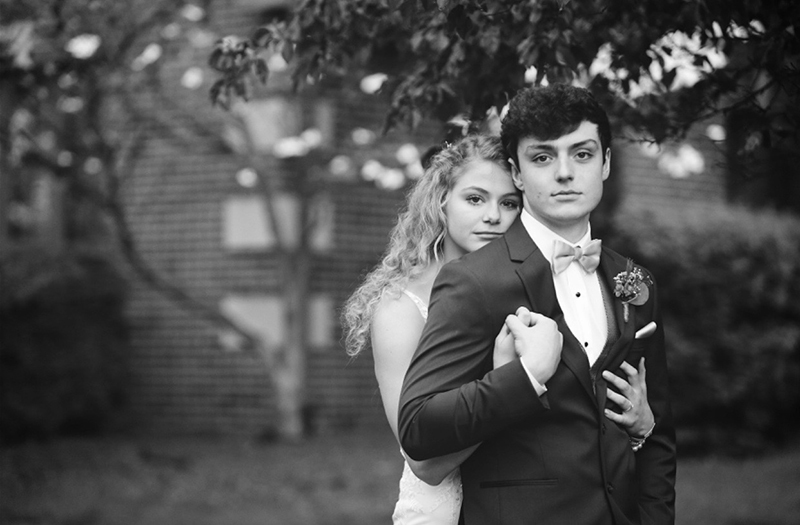 “I think what we really hope to be about is living well every single day that we are given, without reservation. I can’t think of a patient who better exemplifies this attitude than Chase,” she said. “He has floored many of us with how much life he has been able to squeeze out of even challenging times.”

Marrying the love of his life is just the latest example, Dr. Kendall said.

“His love for God, his family and his friends is truly inspirational, and such an example to those of us who are tempted to believe that our time to invest in these precious gifts is unlimited.”

Family is everything to Chase and Sadie, so it’s no surprise that the newlyweds took the whole family on their honeymoon. They called it a “family moon,” and every couple had their own private bungalow on the beach in Florida.

Chase’s older sister Kaitlin and mom Kelli, who refer to the young couple as the “babies,” worried about letting them go on a trip by themselves, especially with all of Chase’s medical needs, so the teens decided they wanted everybody to go.

“It was a way to be together but still be able to rest after the whirlwind of the wedding,” Kelli said.

The trip was a blessing, one of many that have come the family’s way thanks to the kindness of friends and strangers who have stepped up to help in any way they can.

“Our community has loved on us so hard and held us up the entire time,” Kelli said.

While she prays for this burden to be lifted from Chase, he doesn’t carry it alone. Nor does anyone who loves him, she said.

Kelli, who lost her mom – her best friend – in October, is still grieving that loss. The news of Chase’s relapse last month was a punch to the gut.

“I told Chase the day we came home from the doctor that I should be in a fetal position on the floor. I should not be able to make a complete sentence,” she told her son. “Right now it’s 100 percent God giving me the calm spirit and the words to say to you. He has carried us through the last six years.” 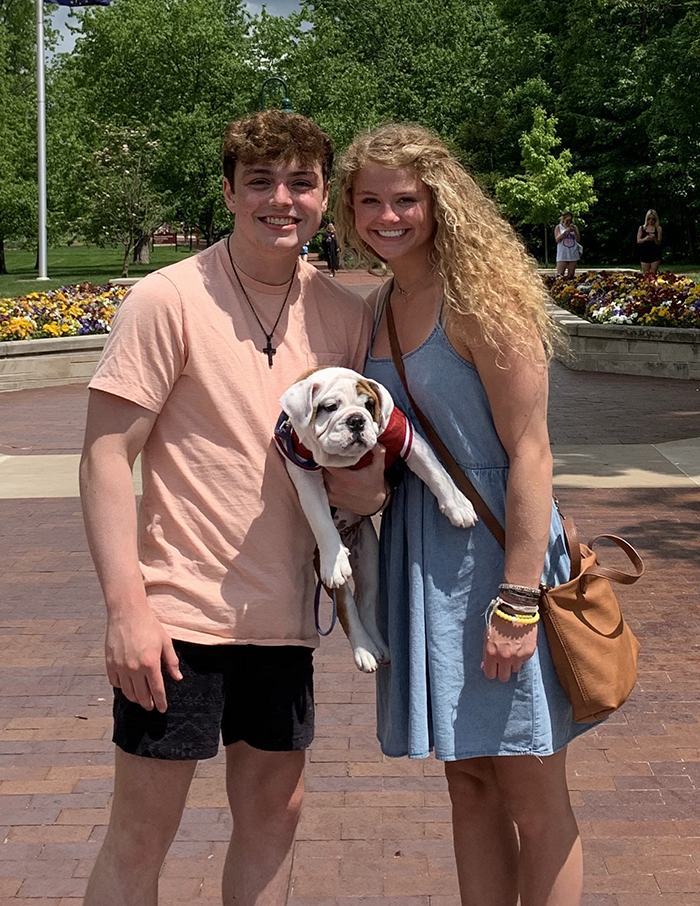 And it seems that overnight her son has grown up. While the young couple live with his parents in their Bargersville home, along with their English bulldog Dubs, they are trying to grow into their roles as husband and wife.

“Sadie gives him a sense of calm. She is always by his side and keeps him focused,” Kelli said. “And Chase loves to be with her, take care of her, help her grow in her faith. They’re just 18-year-old babies, but he is very serious about his role.”

A LIFETIME OF MIRACLES

Kelli Smith would love for one more gigantic miracle to take place and that her son would live a long and happy life with his bride, “but I’ve been at this long enough to know that it’s not necessarily what’s going to happen, and I have to trust God to carry it through to make it something beautiful.”

It’s enough right now to take note of all the smaller miracles along the way.

“Chase is our miracle,” she said. “People don’t get to experience somebody like Chase in a lifetime. We have been able to experience his beautiful soul and mind for almost 19 years now. To me, that’s a miracle. He’s such an amazing kid. Even for him to be able to live another year and seek more treatment would be a miracle.”

Chase, who turns 19 on June 4, is not so much focused on the number of days he has left on Earth.

“My biggest goal besides spreading the word of God is loving my family and my wife and my friends to the fullest and spending every moment I can with them,” he said. “No matter where I am, I just want to be happy with my people.”