When Shannon Lowe told her mom “it’s go time,” the emotional mother threw her bag in the car and started the long drive to Indy for her daughter’s heart transplant. She couldn’t believe it when she was pulled over by a police officer – and what he told her next.

This is the third in a series of stories about adult congenital heart patients being treated at Riley Hospital for Children at IU Health.

Growing up, Shannon Lowe had scoliosis so bad she had to have seven surgeries on her back. Still, she managed to be active in gymnastics, cheerleading, color guard and choir during high school.

Her weak heart was more of a nuisance at the time – it meant she couldn’t run during gym class or walk long distances without getting out of breath. But she never thought about what life might be like with a new heart. 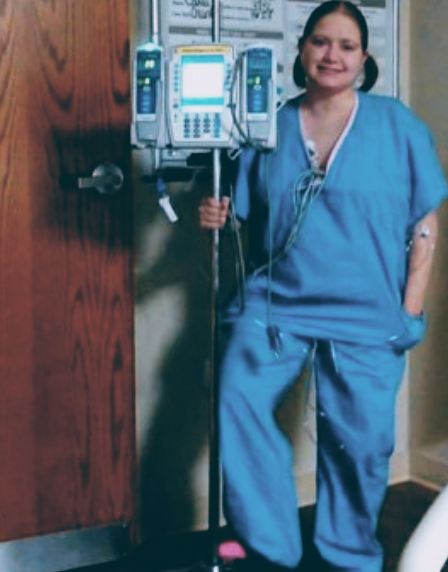 Lowe, 38, was born with transposition of the great vessels, a group of congenital heart defects that required two open-heart surgeries by Riley Hospital for Children’s Dr. John Brown – the first when she was 10 years old and another four years ago.

But it wasn’t until two years ago that IU Health cardiologist Dr. Aaron Kay began talking about the possibility of a heart transplant.

By then, Lowe had been diagnosed with congestive heart failure. She couldn’t work, couldn’t keep up with her niece and nephews and really couldn’t live independently.

It was a harsh reality for a young woman who had earned an associate’s degree to work as a medical assistant and planned to take nursing classes. Up until then, she had worked several years in a chiropractor’s office.

On April 29 of this year, the Warsaw woman was admitted to IU Health Methodist Hospital for evaluation for a transplant. In mid-May, she was transferred to Riley, where she waited another six weeks.

It was Thursday, June 27, when she got the news that a heart was a match for her. She FaceTimed her mom in Warsaw, Indiana: “It’s go time!”

When Lana Bevely got the call from her daughter, she threw her already packed bag in the car and took off for the 2 ½-hour drive to Indianapolis from Warsaw.

She was anxious, joyful, excited and fearful. And she couldn’t stop the tears as she pointed her car south. Her baby girl was getting a heart transplant.

But soon, red flashing lights interrupted her journey just outside of Warsaw. As she pulled over and the officer came to her window, she cried even harder.

“I told the officer, I’m sorry, nothing’s wrong, but my daughter just got a heart!”

When he asked what her daughter’s name was and she told him, his reply stunned her.

“I used to date Shannon. We’re following her journey on Facebook.”

He took off his sunglasses so she could better see his face, but she didn’t remember him. Her daughter had lots of friends and boyfriends back in high school, two decades ago.

He let her off with a warning and these words: “Tell Shannon we’re praying for her. And you need to slow down so you get there safely and don’t become a donor for someone else.”

Bevely thanked him and set her cruise control for the rest of the trip.

She joined a crowd of family and friends at the hospital that night. The transplant would take place early the next day, June 28.

“I didn’t sleep that night,” Lowe said, recalling how her best friend, her friend’s mom, her mom, dad (Jeff Lowe), brothers, godson and goddaughter spent the night talking and playing cards. Many arrived wearing T-shirts printed with “New heart, new start” on the front and #teamshannon on the back.

Later, as Lowe recovered in the Riley CVICU with her mom by her side, she talked about her new heart and her new purpose. 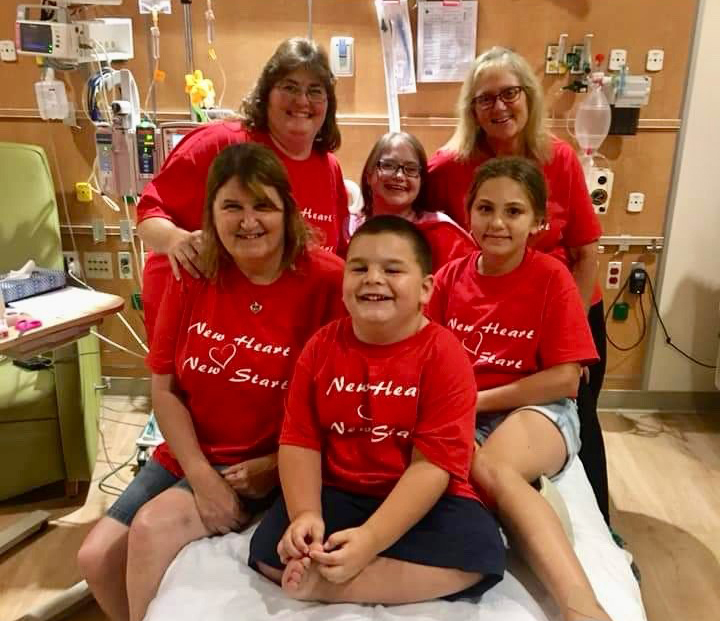 “I don’t want to squander this opportunity; I’ve been fighting for it for a while.”

She knows she faces lifestyle changes, including a regimented daily dose of medications and diet restrictions. But she wants to be strong enough to care for children again and perhaps do some volunteer work.

She found out when writing a paper in college about her heart condition that some projections had her living only until age 5. Living into her early teens would be considered a long life.

When she asked her mom about those projections, Bevely told her she never paid them much attention.

“I’ve always had a strong belief in God, and I know that she’s not going anywhere until God’s ready for her,” Bevely said. “He’s not done with you yet,” she told her daughter. 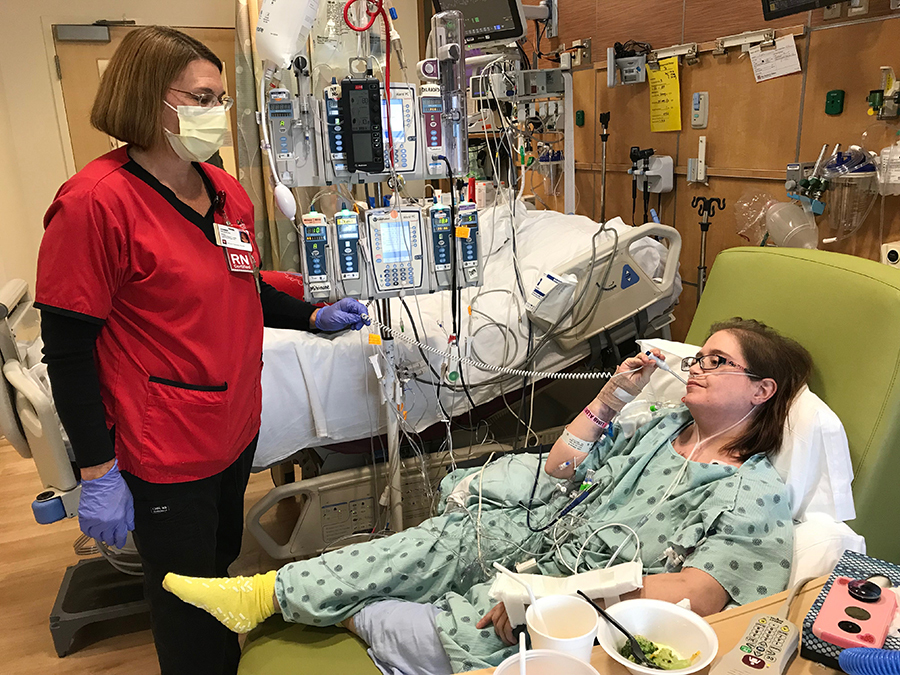 As RN Connie Neuzerling came in to check Lowe’s vitals and administer medication, she referred to her patient as a celebrity on the floor.

“She’s been through a lot, and there’s always a smile on her face. She’s ready to start a new life.”

This isn’t the first time Neuzerling has cared for adult patients in the heart unit at Riley.

“It’s nice to have patients that can tell you what they’re feeling. Babies are cute and sweet, but they can’t really talk to me and tell me what’s going on. She’s doing fabulous. She does everything we ask her to do.” 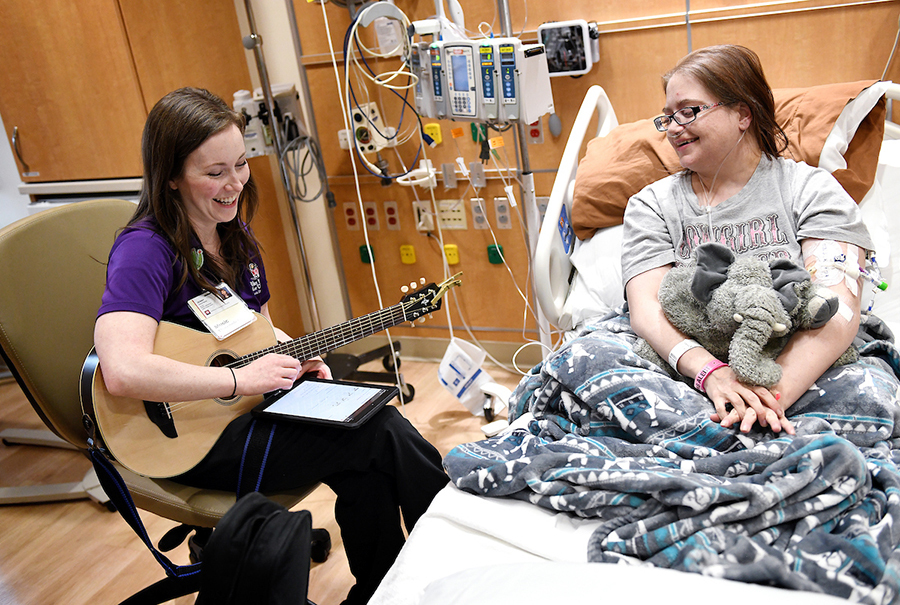 Lowe has a recording of her old heartbeat and one of her new one set to music with help from music therapist Jenny Kaufman. She’s still getting used to the idea of someone else’s heart beating in her chest.

“I have my ups and downs. Sometimes I cry on the inside.”

As per policy, she knows nothing about the donor, but in the early days after transplant, she imagined hearing crying and felt like perhaps it was a younger heart. She is small – 4 feet, 9 inches – so it could have been a child donor. Or she could have been dreaming, she acknowledged.

Regardless, the donor was loved and cherished by family, and their gift is enormous, Bevely said.

“We had three losses in the last month – my father, a friend of ours and my best friend. So when we got the call (that a heart was available), even though we were happy, we were feeling for that donor family too because it’s such a bittersweet time. We all are donors in our family so we can help give life if we can.

Lowe was released from Riley last week and is now home in Warsaw. She shares the lower level of a home with her grandma, while her mom and stepdad live on the top floor. 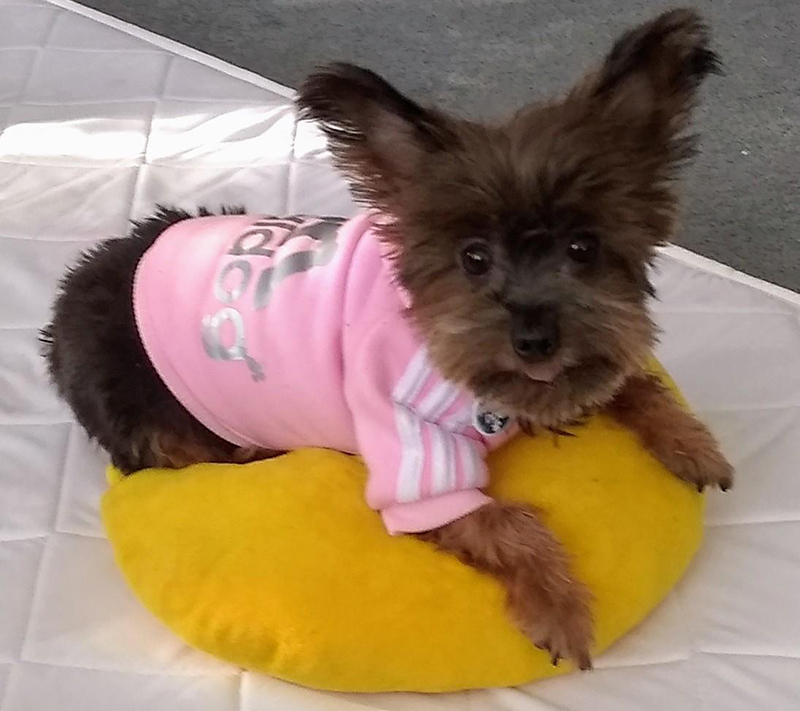 After two months away, she was eager to get back to familiar surroundings and to see her dog, Marley, whom she missed terribly.

“It’s a lot easier to heal at home without all the beeps, wires and waking up for vitals,” she said.

Eventually, she’d like to live on her own again, but for now, she’s content to have her family and her fur baby close, to be sleeping in her own bed and to enjoy the comforts of home.