This is the second in a series of stories about adult heart patients at Riley Hospital for Children. 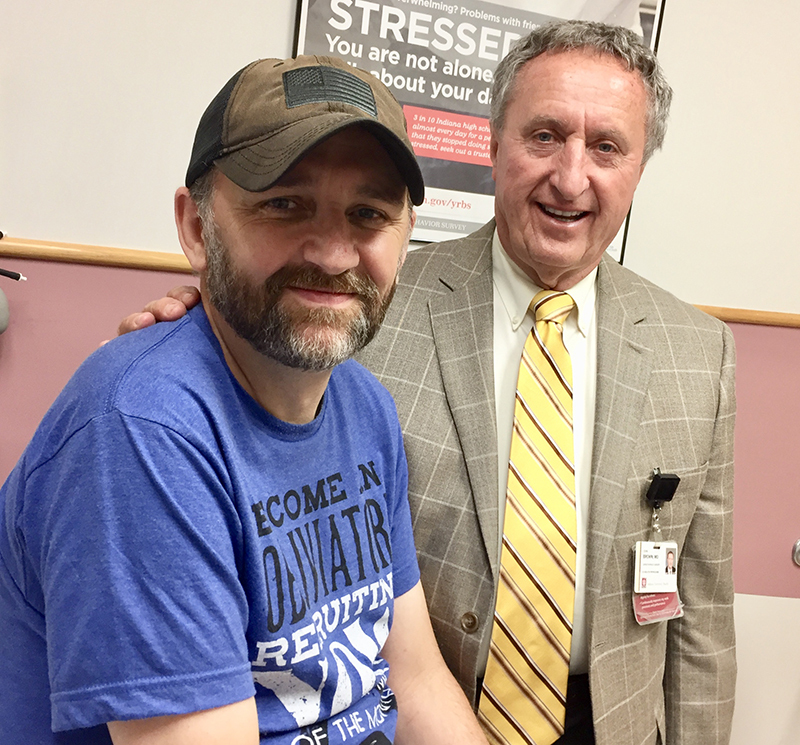 Dr. Brown was a new heart surgeon at Riley Hospital for Children in the late 1970s, and Aurs was then a 6-year-old boy who had been diagnosed at birth with Tetralogy of Fallot (TOF), a rare condition caused by a combination of four heart defects that send oxygen-poor blood flowing out of the heart and into the rest of the body.

When he was 13 months old, Aurs had his first open-heart surgery, with Dr. Harold King placing a systemic-to-pulmonary artery shunt to improve his heart function. At age 6, he returned to Riley, where Drs. King and Brown performed another surgery to remove the shunt and to further repair the TOF.

But it would be another four decades before Aurs would see Dr. Brown in the operating room again. This time, it would be for a pulmonary valve replacement and the maze procedure to treat atrial fibrillation. That surgery took place May 22 of this year at IU Health Methodist Hospital. Working with Dr. Brown this time was Dr. Jeremy Herrmann, who joined Riley’s world-renowned heart surgery team in 2016.

It was a surgery that almost didn’t happen. Aurs, who turns 48 later this month, had dreams of going into the military or becoming a police officer when he was younger, but his weak heart always held him back. He got used to living with his condition and lost touch with some of his early Riley team.

Then he suffered a series of seizures over the past few years that left him unable to continue in his job as a truck driver. He lost his apartment Downtown and eventually his independence, he said. He moved in with his sister and sold his Jeep, his vast music collection and his gun to keep afloat.

His health problems were getting worse. After his last seizure in February of this year, he was admitted to Methodist for three days. That’s when Dr. Georges Ephrem took a closer look at his heart. The cardiologist found Aurs’ heart was enlarged and a hole between the chambers was growing.

At the same time, Aurs’ anxiety and depression over his circumstances left him ambivalent about the future.

“When I didn’t think I would get the surgery, I was like, ‘I’m 47, that’s long enough. I’ve had a good life,’ ” he said with a twinge of fatalism. But Dr. Brown would hear none of that, telling Aurs the surgery could give him back his life, extending it for another 20-plus years.

It was the wake-up call Aurs needed. He never married and has no children, but he has plenty of family – his mom and dad, brother and sisters, nieces and nephews, great nieces. Many of them were at the hospital in May to support him.

“I’m just thankful,” he said later. “I feel blessed beyond belief and am hoping to get back to a somewhat normal life. I feel pretty dang good, just wish I could go back to work.”

Aurs found himself back at Riley last month for a follow-up appointment with Dr. Brown. He laughed when he heard he was going to Riley.

“When I got sent to Riley to get my chest X-ray (before surgery), I thought why are they sending a 47-year-old guy to Riley?” 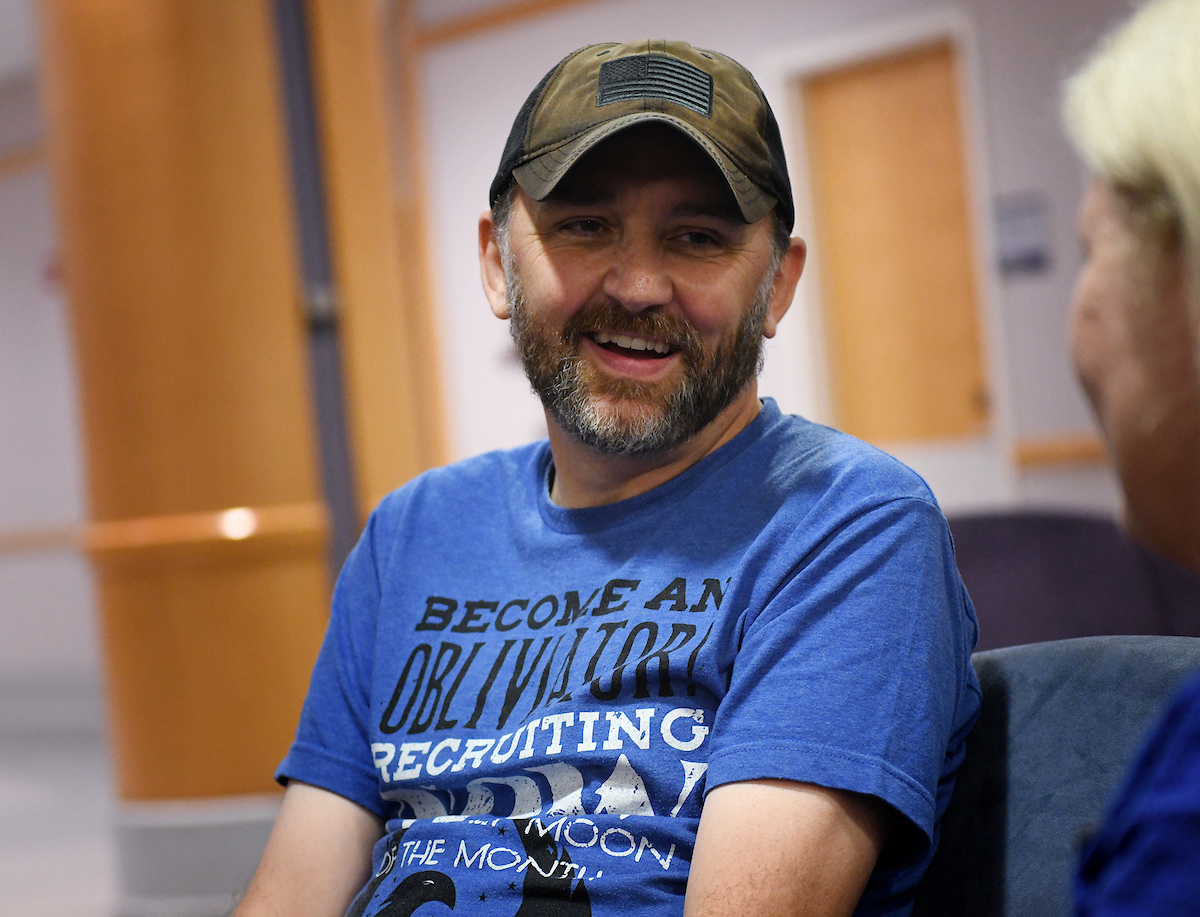 He’s not alone. Adults continue to be seen at the children’s hospital for many heart and other congenital conditions. Most are outpatient, but some stay inpatient.

“Some heart patients do stay at Riley,” Dr. Brown said. “It depends on how complicated their heart condition is and what all we need to do. I’m comfortable operating in both places (Methodist and Riley). Dr. Herrmann and I operate both places, we’re used to it. I’m over there once or twice a week doing a case. I’m familiar with the operating room, with all the personnel, the nursing staff in the ICU.”

It’s not that unusual for adults to be at Riley, especially if you consider an adult 18 or older, Dr. Brown said. “We probably operate on 30 or 40 patients a year over age 18 here at Riley. I’ve been here 41 years, so I’m seeing some of the patients I operated on way back then.”

Patients like Aurs, who was driven to Riley by his mother, Pam Turner, from the south side of Indianapolis for his follow-up. She has her own health challenges, but “Richie” is her baby, the youngest of four.

She remembers sleeping in the lounge near the old carousel at Riley with her other three kids when her youngest was hospitalized for long stretches as a baby and later as a little boy.

“I wasn’t going to leave him,” she said.

Her memory of those days has faded, but she remembers feeling that her son was in good hands.

“I remember Dr. Brown, Dr. King and Dr. Girod (Donald). The care was awesome. I would not go anywhere else.”

As Turner waited in the lobby of the Riley Outpatient Clinic, her son fidgeted in a small exam room, anxious for Dr. Brown to arrive after coming out of another surgery at Methodist. When he walked into the room, he greeted Aurs warmly, then listened to his heart.

“You look great. Sounds like a new heart,” he told Aurs. “Now that we’ve replaced your valve and done the maze procedure, you’re likely to stay in a normal rhythm.”

When Aurs tells him stories of seeing stars before passing out on the job in the past, Dr. Brown said it’s possible that Aurs’ disrupted heart rhythm caused the seizures because his brain wasn’t getting enough blood supply.

“I’d love to get you back your commercial driver’s license, but I’m not the guy that would be able to do that,” the doctor said. “You won’t need to see me again unless a problem arises, and I’m not counting on that.” 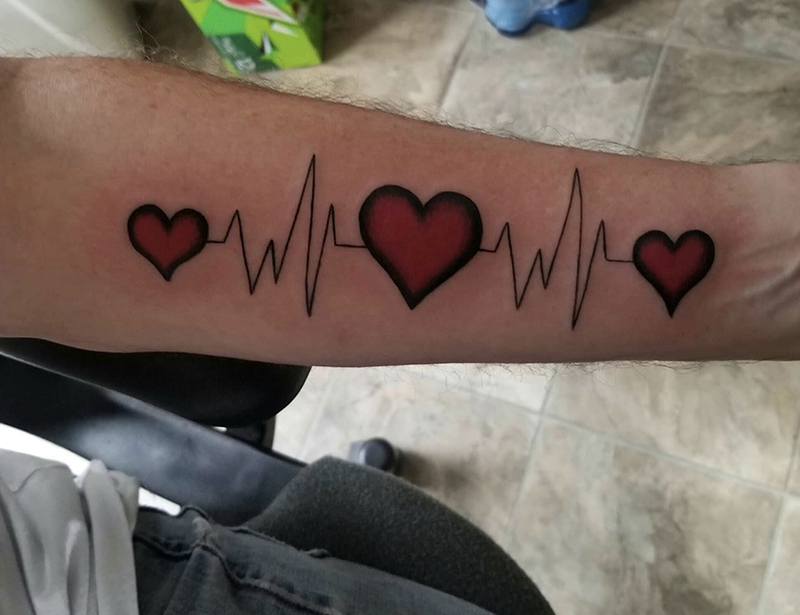 For now, Aurs is applying for disability and hoping to live independently again. He recently got his first tattoo to represent the three heart surgeries he’s had.

“It might seem silly to some, but it means a lot to me,” he said.

His mom tries to keep him positive amid the ups and downs of his health journey. He calls her an angel, she calls him an awesome kid. Together, they leave Riley once again after his recent appointment, the son pushing his mom in a wheelchair.

Walking down the hallways brings the memories back,” Aurs said, calling them “warm fuzzies.”

“Despite being sick, I have good memories. Riley was good to me.”