“My son was lying on the floor; he was dying”

Hero mom gives her 15-year-old CPR, then lets the doctors, nurses and therapists at Riley take the wheel after an accidental shooting. After six weeks in the hospital, the teen is learning how to be independent again.

The bullet that entered just to the left of his spine in his lower back disintegrated inside his body, damaging multiple organs.

Yet here he is, smiling, and yes, occasionally growling at her as he learns to adapt to a new way of life during physical therapy at Riley Hospital for Children. She’ll take it all – his joy, his fear, his anger – because it means she has her Dylan back. 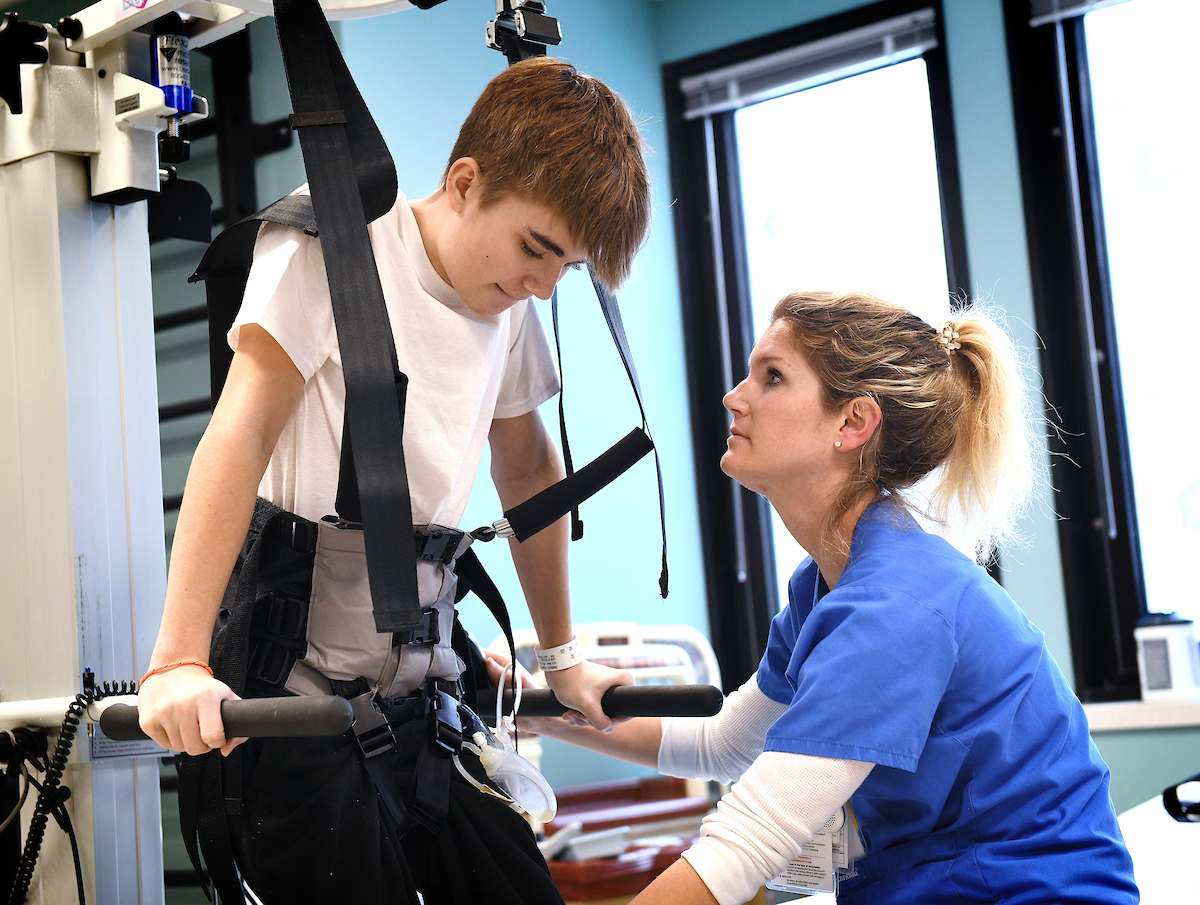 Fifteen-year-old Dylan Matkins is missing a kidney and part of his pancreas, and he suffered a lacerated spleen, liver, small intestine and bowel in the accidental shooting that happened in the family’s Southside home on Jan. 2. And there’s something else. A spinal cord injury.

“His goal is to walk again, and I believe that he will,” Welch said as she watched her son pull his body up out of his wheelchair with help from an overhead bar, a harness and support from physical therapist Lindsay Schaefer. “He’s very independent,” Welch said. “He has made a miraculous recovery; it blows our minds.”

Dylan was moved to inpatient rehab at Riley after two weeks in intensive care. In rehab, he endured four therapy sessions daily to get him ready to go home. On this day, he was using a machine called a LiteGait, which supports him in a standing position and assists as he moves his feet forward.

Welch is watching intently, quietly cheering as her son slowly moves first one foot, then the other. Schaefer explained that the machine measures the amount of weight being put through a harness Dylan wears so they can watch the progression of weight bearing through his lower extremities.

The therapist and patient have an easy-going relationship. She promises not to give him a wedgie with the harness, and he jokes about getting their dogs together to breed. They’ve bonded over their love of canines. She has a rescue Boxer named Harley, and he has a Boxer named Bella and a German Shepherd puppy named Rico.

That puppy is probably what Dylan missed most during the nearly six weeks he was hospitalized. He got the dog for Christmas and worried that Rico would think he had abandoned him. But before his release from the hospital, Dylan was already planning their reunion, which would involve lots of wet kisses and rough-housing on the floor.

“I might cry when I see him,” Dylan said. 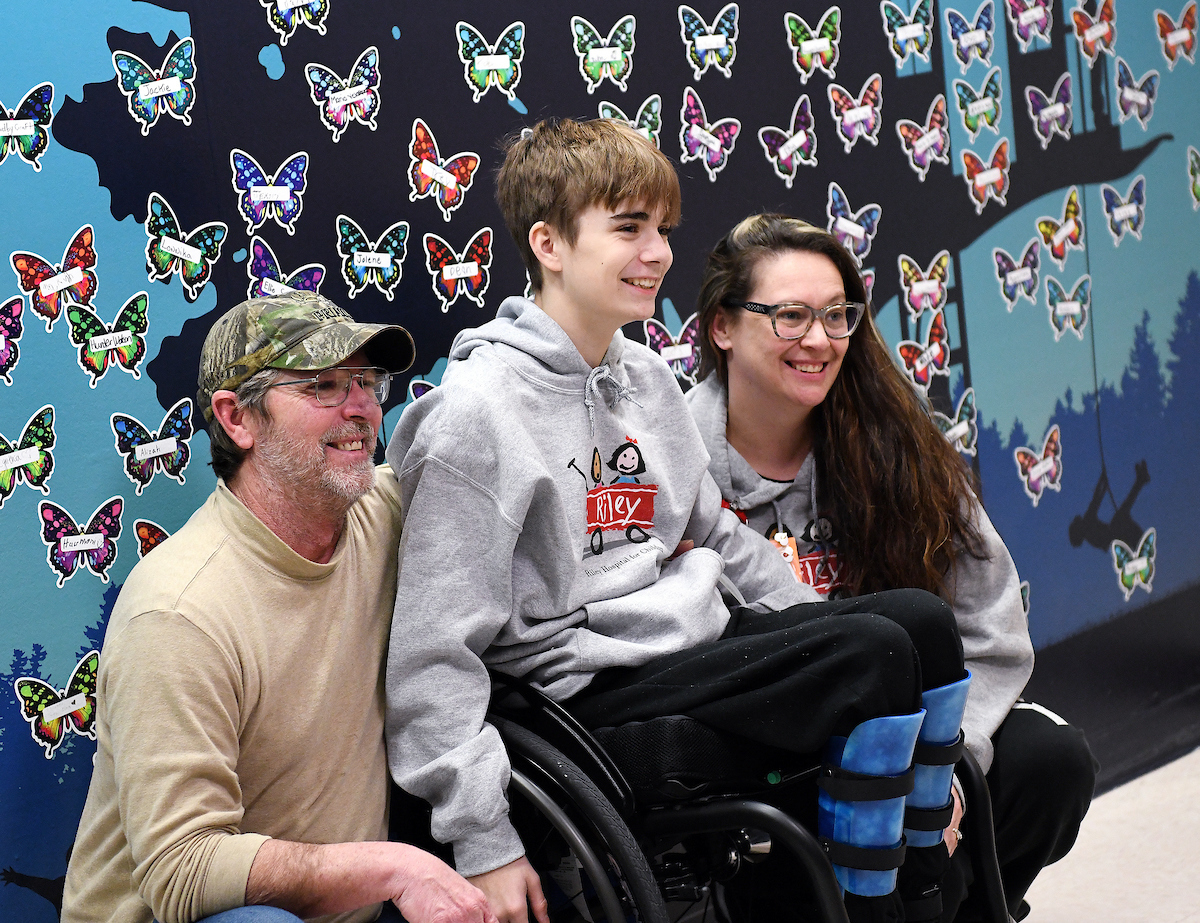 Welch was a single mom, raising Dylan with her father’s help, until she married Bill Welch almost nine years ago. Mother and son are tight. Best buds, she said.

She had expected to spend the day after New Year’s planning his birthday celebration the next day. Instead he would spend his 15th birthday in the hospital, fighting for his life.

But he was alive. And for that, he has his mom to thank. Welch is a technical donor specialist for Versiti Blood Center of Indiana. She is trained in CPR and knew what to do that fateful morning when another family member told her Dylan was injured in the basement of their home. Welch is afraid of guns. Her husband is a gun safety advocate. Neither knew there was a loaded gun in the house, she said.

As she headed for the basement, she called 911 on her cellphone. What she saw horrified her.

“My son was lying on the floor. He was dying.”

She put the 911 operator on speaker, checked for a pulse, then began CPR, willing her son to breathe. Within minutes, EMTs and police arrived and took over, loading Dylan into an ambulance. They were headed to Riley Hospital for Children, and she was right behind them.

It wasn’t Welch’s first trip to Riley. Three years ago, her 1-month-old son Dalton died after suffering complications of prematurity. Still, she loves the hospital for the care her son received. Every year, she hosts a blood drive at Versiti’s Greenwood center in Dalton’s memory.

Now she was in the Emergency Department, where her oldest child was clinging to life. She was told she had 15 seconds to see him before he underwent emergency surgery.

“There was a chaplain right by my side holding my hand. I took a deep breath and walked up to Dylan. His eyes were open. I said, ‘Son, I love you so much, you’re going to get through this. I’ll be right here when you get out of surgery.’ ”

Welch said she had peace in that moment. “I owe that to my faith. I felt confident that my son had a chance.”

She credits God and the doctors, nurses and therapists at Riley for giving him that chance. Dylan would receive multiple units of blood during his surgery, a fact that has inspired Welch to be even more of an advocate for blood donation.

Dylan doesn’t remember much about the incident or the first couple of weeks when he was hospitalized, and that’s a blessing, his mom says. 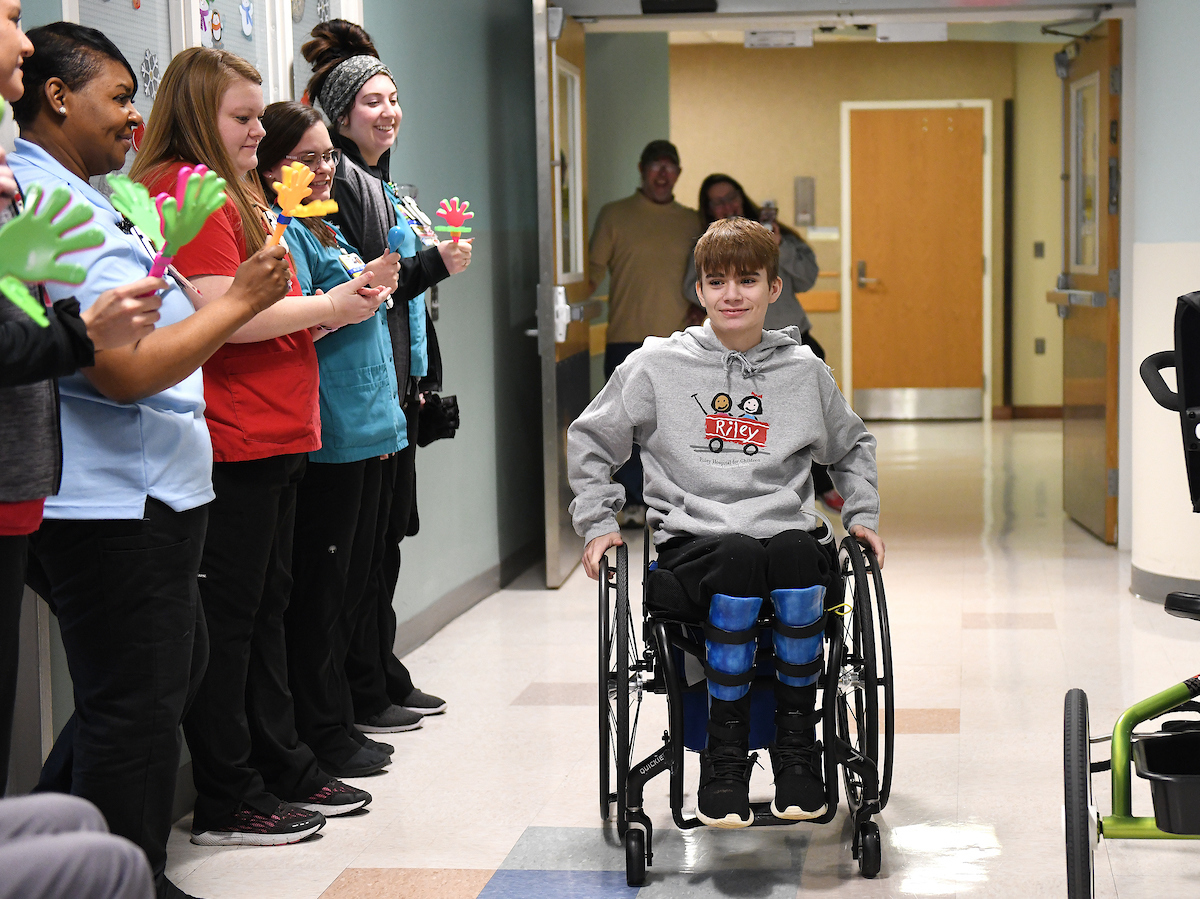 As he comes into rehab just days before his release, Dylan is fresh from a shower and in a good mood. He shoots a couple of baskets in the portable goal and shows off his latest trick – a wheelie in his chair. He’s not supposed to do that, but he’s a teenager, so …

During the hour-long session, Dylan’s mood won’t always be this chipper.

As he struggles to transfer himself from a mat on the floor to his wheelchair and back down again, he grunts loudly in frustration.

“Punch and go, punch and go,” Schaefer tells him. “The faster you do it, the easier it will be.”

She understands the challenges he faces.

“Dylan is a very hard worker, but frustration does set in when things that once were easy now are not. But then he realizes ‘I can do these things and I’m going to work through it,’ ” she said. He uses his anger to power him forward.

“These are very hard tasks, and what he’s accomplished in a couple of weeks can take some people double that time.” 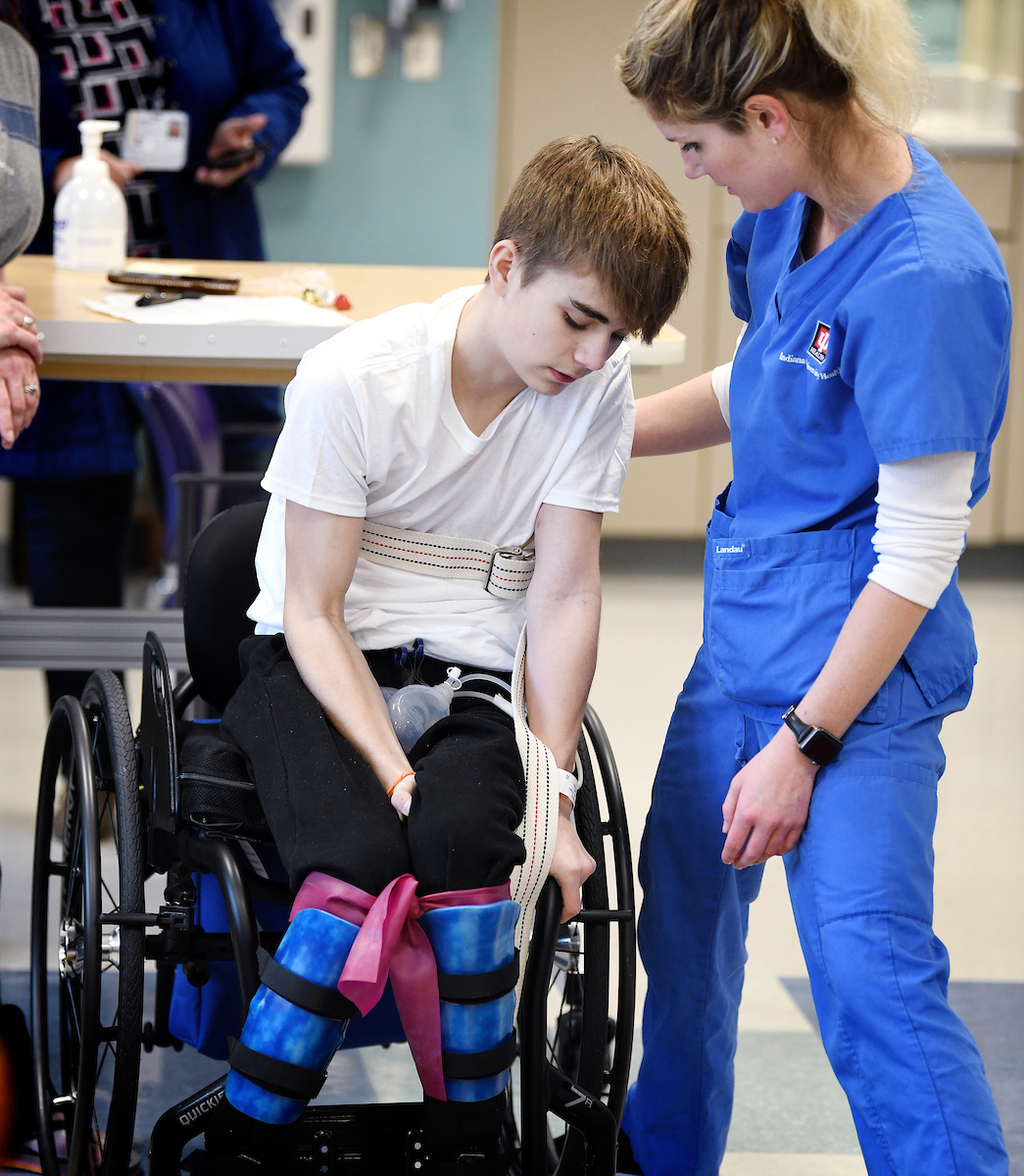 At home, Dylan will wear leg braces to stabilize him and continue with outpatient therapy at the IU Health Neuroscience Center four days a week.

“I don’t want him to be less active,” his mom said. “I want him to continue to progress and not go backward.”

Dylan is an outdoorsman to his core. He loves fishing, hunting, camping and playing basketball.

“It’s in his blood because of my dad,” Welch said. “He wants to learn how to work on dirt bikes and go-carts, and he’s looking forward to working on trucks with his stepdad.”

Welch has said she wants to use Dylan’s story to raise awareness of gun safety and the need for blood donations. That blood, some of it likely donated at the blood center where she works, is what helped save her son’s life.

“Our focus and our hope and our faith is in Dylan because we know he’s going to make it,” she said. “We remind Dylan that we are so sorry this happened to him, but there is so much good coming out of it already. What greater purpose could there be?”