Music and art calm mother and child in NICU

After five miscarriages, she delivered a baby girl three months early. Now, her daughter is 17 pounds of cuteness.

“We anticipated problems; I really didn’t think I’d be able to carry her,” the 38-year-old South Bend woman said.

Her previous pregnancies had ended at around two months, so when the two-month mark came and went with this latest pregnancy, she was more than a little shocked.

But Miyah Cunningham did indeed arrive early – three months early. Born in a South Bend hospital May 26, 2018, she weighed 1 pound, 10 ounces. She was delivered by C-section after Miranda’s obstetrician became concerned about mom’s blood pressure and the baby’s heart rate. 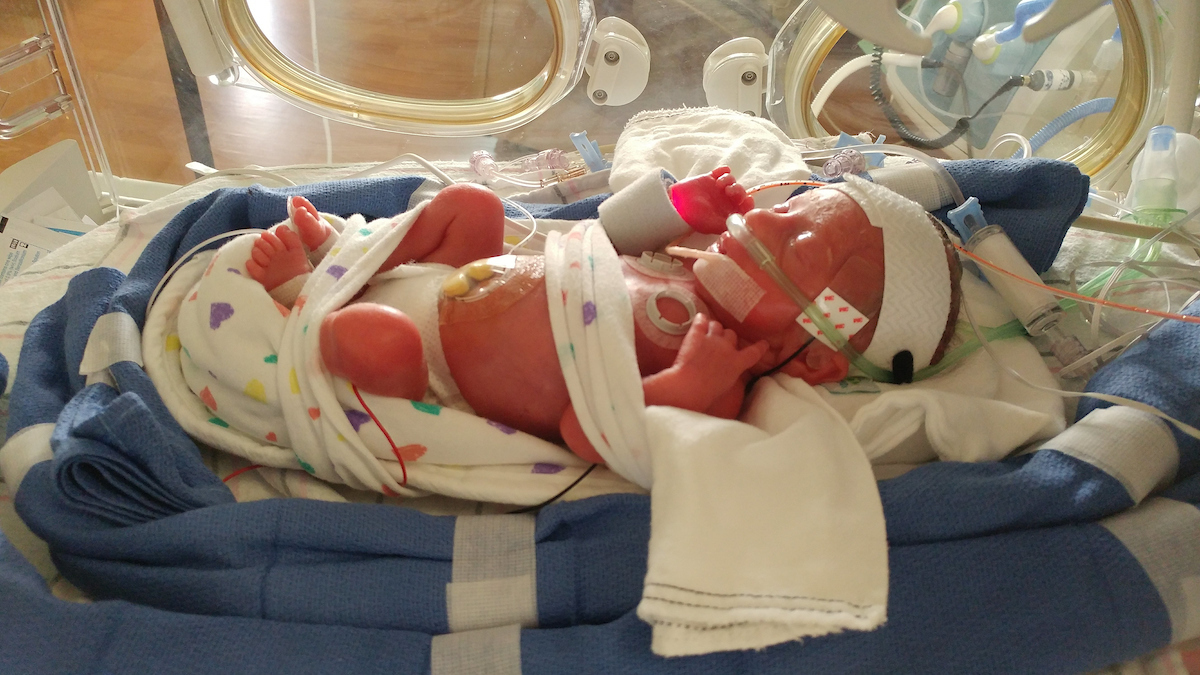 Doctors warned her and her husband, Anthony, that the baby likely would not cry or open her eyes, she wouldn’t be breathing on her own and she wouldn’t look the way the parents might expect their newborn to look.

Miranda, who had planned for a natural delivery, said she was “terrified” about having a C-section, but the surgery went off relatively smoothly. She felt a tug, then she heard what she described as a squawk.

“Is that her?” she asked her husband. As nurses were cleaning the baby, the child let out a little cry. They brought her over to see Miranda, “and she opened her eyes and looked at me,” the new mom said.

Between that and the mass of dark hair her daughter had, Miranda was over the moon with love and hope.

But 14 hours after her birth, Miyah had to be air-lifted to Riley Hospital for Children at IU Health, with her dad following by car and Miranda stuck in the hospital for three more days.

Once she was reunited with her daughter in Indianapolis, however, she wouldn’t leave. She spent days at the hospital and nights in the Ronald McDonald House, though occasionally she and Miyah had “slumber parties” in her NICU room.

This was her life for five months. But during that time, she got to know many Riley team members who not only took care of her baby, they cared for her, too, when they noticed she was becoming more anxious. 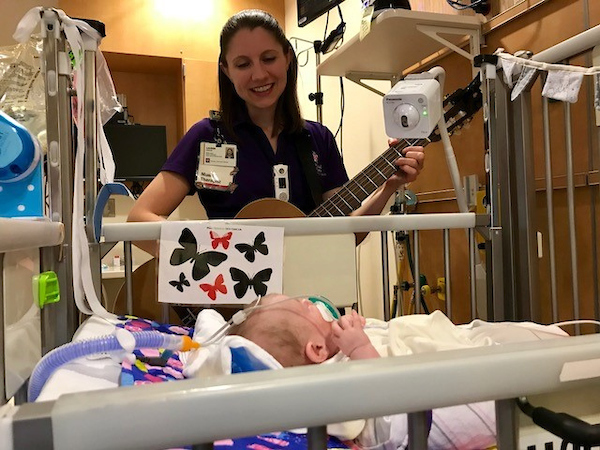 “We are so thankful to Riley on every front,” Miranda said. “The doctors really listen to you, the nurses are extremely supportive, and the arts and music therapy team hung out with me a lot. It was more than singing songs and doing art. We talked a lot, and it was really therapeutic.”

Riley art therapist Cassie Dobbs and music therapist Lauren Servos met with Miranda at least weekly, sometimes more often. They’d work in Miyah’s room or in the art room on the eighth floor. They made a shirt, worked on pottery and recorded lullabies to put on a music recorder that Miyah could listen to.

“Lauren would play guitar and sing, I would sing. It was nice, it gave me something to do for Miyah,” Miranda said. “And we had fun.”

Servos recalls that her time with Miranda began with the therapist singing to Miyah. Slowly, Miranda began to sing along, and eventually they began making music together. 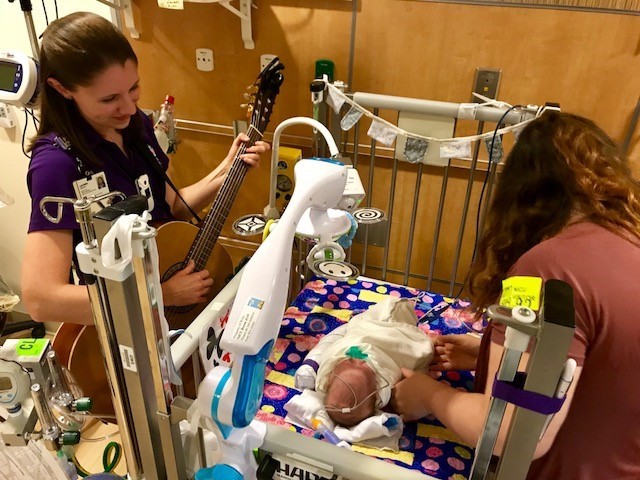 “We had some awesome conversations,” Servos said. “And Miyah had a personality from the beginning. Even when she was teeny tiny, she was feisty.”

Miranda would eventually help Servos by recording a video talking about her experience at Riley and how important music was to her and Miyah. That video helped Servos win a $10,000 grant to buy 105 music players and voice recorders for the current NICU and the mother-baby tower when it opens.

As an art therapist, Dobbs is also a master-level counselor. Her job and that of her peers is to support patients and caregivers outside the medical realm 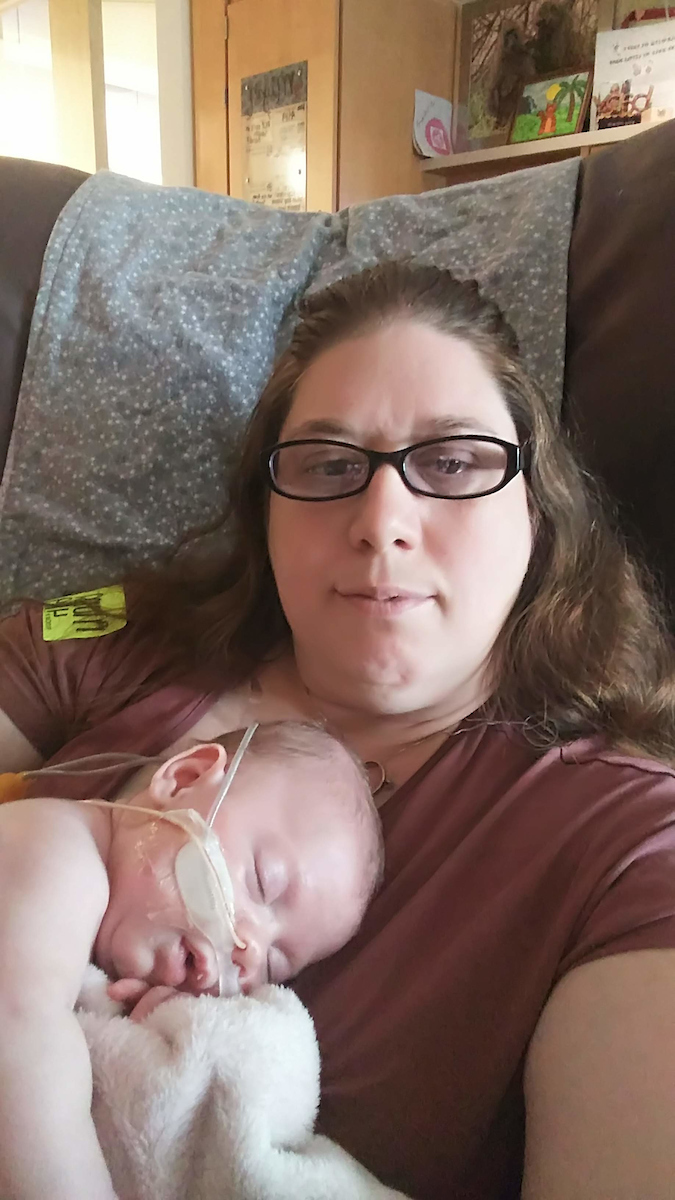 “With some of the parents and kids, we might not make art at all, we might just sit and talk,” she said. “The art makes it a little more of a unique experience; sometimes it’s a nonverbal way of processing something or a totally different way of expressing yourself.”

For stressed caregivers, particularly in the NICU, “this is their time,” Dobbs said. “It speaks highly to the beauty of Riley’s mission of family-centered care. Everybody’s affected when someone in the family is in the hospital.”

Miranda and Anthony brought Miyah home in October. Today, although she’s hooked up to oxygen and a heart-rate monitor and she still has a feeding tube, she’s a sturdy 17 pounds and is, her mom said, a “breast junkie.”

“I don’t produce much, but she seems to get a lot of comfort from it,” Miranda said.

Miyah, who had to have surgery to repair a bowel perforation shortly after birth, might face more surgery in the future to close a hole in her heart, her mom said, but for now she’s a champion cuddler with a sense of humor.

After all the stress of the hospital, she said, “she goes really easy on me at home.”