“Actually getting to hold my daughter and have her here at home is just amazing.”

Brittany Wahr is celebrating Mother’s Day in the most wonderful way possible – with her premature daughter finally at home.

It’s been a tumultuous year for Brittany and her husband, Rob, who lost one baby three days after birth last year and spent the next 11 ½ months standing vigil over her twin at Riley Hospital for Children.

Kinsley and Kennedy Wahr were born 15 weeks early on May 15, 2018. Each weighed 1 pound, 8 ounces. Kinsley did not survive. Kennedy suffered a multitude of health problems, including respiratory distress, an intestinal disease called NEC (necrotizing enterocolitis), fluid accumulation in her brain and various infections.

After setting several goals for getting their little girl home – Thanksgiving, Christmas, Valentine’s Day – and watching those days come and go from Kennedy’s hospital room, Brittany had her sights set on one more – May 15 – Kennedy’s first birthday. 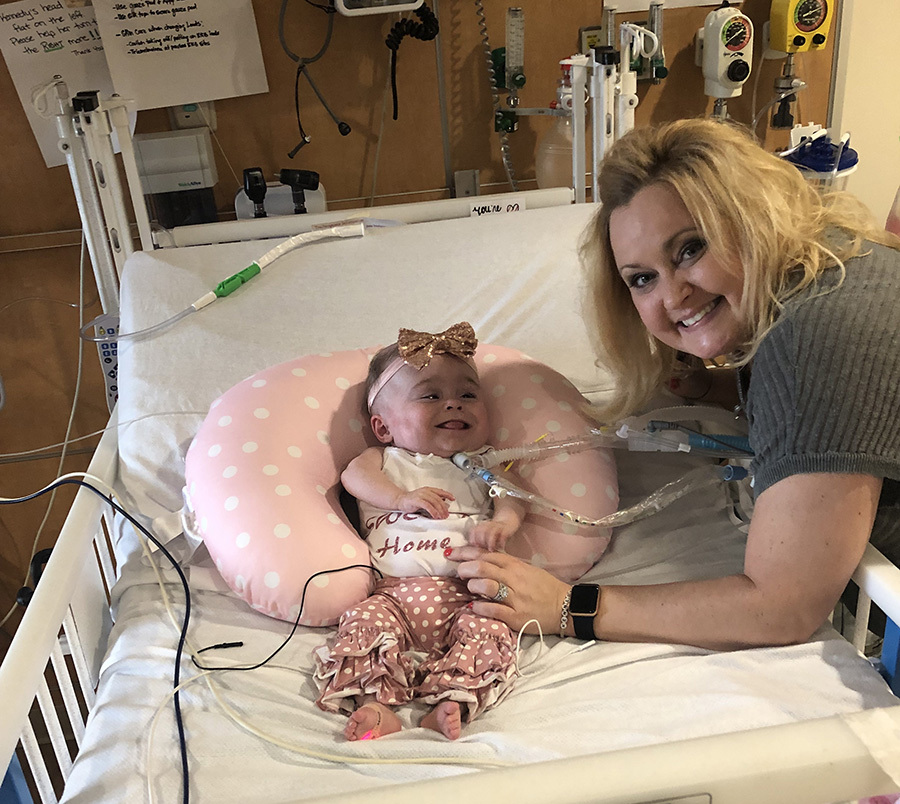 In the meantime, she tried to keep in mind what so many people told her: Breathe and take one day at a time.

“That’s what I had to do. I had to look at what accomplishments we made today, and I don’t want to say enjoy the journey because it’s a hospital and that’s hard to do, but at the same time it’s what we had to do because that was her first year of life. We didn’t want to miss out on anything just because she was in the hospital, so we tried to go one day at a time and breathe.”

Finally, on April 25, 345 days after she was born, Kennedy came home. For the first time ever, she left the confines of the hospital and rode in a car with her parents to their Fishers home, where her nursery had been set up months earlier, awaiting her arrival.

The trip itself was surreal, Brittany said. 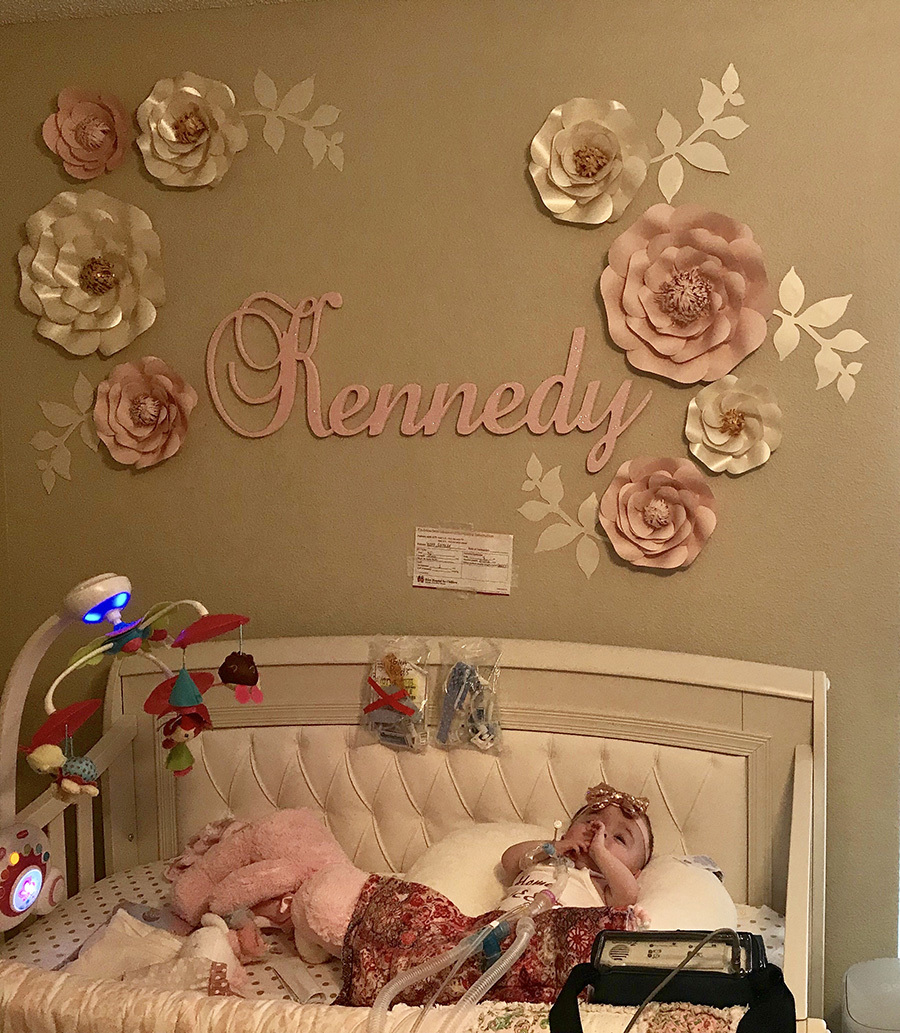 “We’d never been in a car with her. We’d never taken her anywhere. She’s always been in the hospital. I was a ball of emotions – nervous, excited, anxious. I can’t even explain.”

Luckily, Kennedy seemed to know she was headed home because she slept pretty much the entire 45-minute trip.

Once home though, the chaos began. That’s because Kennedy required lots of medical support equipment, including a home ventilator. She has a trach tube for breathing and a G-tube for nutrition. It’s a lot for any parent to absorb, but the Wahrs had spent the previous several weeks preparing for this, undergoing training at Riley on how to care for their daughter at home.

As much as they wanted to get out of the hospital, the couple admits to being equal parts terrified and excited at the prospect of being responsible for Kennedy’s care.

“We’re not going to have all these nurses at our fingertips,” Brittany remembers saying. “This is scary, it’s just me and my husband and we’re supposed to take care of this medically fragile child and respond to any emergency or situation.”

Kennedy does have nursing support most weekdays, but Brittany said the anxiety she felt on that first day was severe. “I felt sick to my stomach, like what’s going to happen, what do I need to do? There’s a million questions going through your head.”

Earlier this week, she talked about celebrating her first Mother’s Day with her husband and daughter. Because of Kennedy’s fragile condition, they don’t want to take her out anywhere, so they planned to enjoy a quiet day at home. 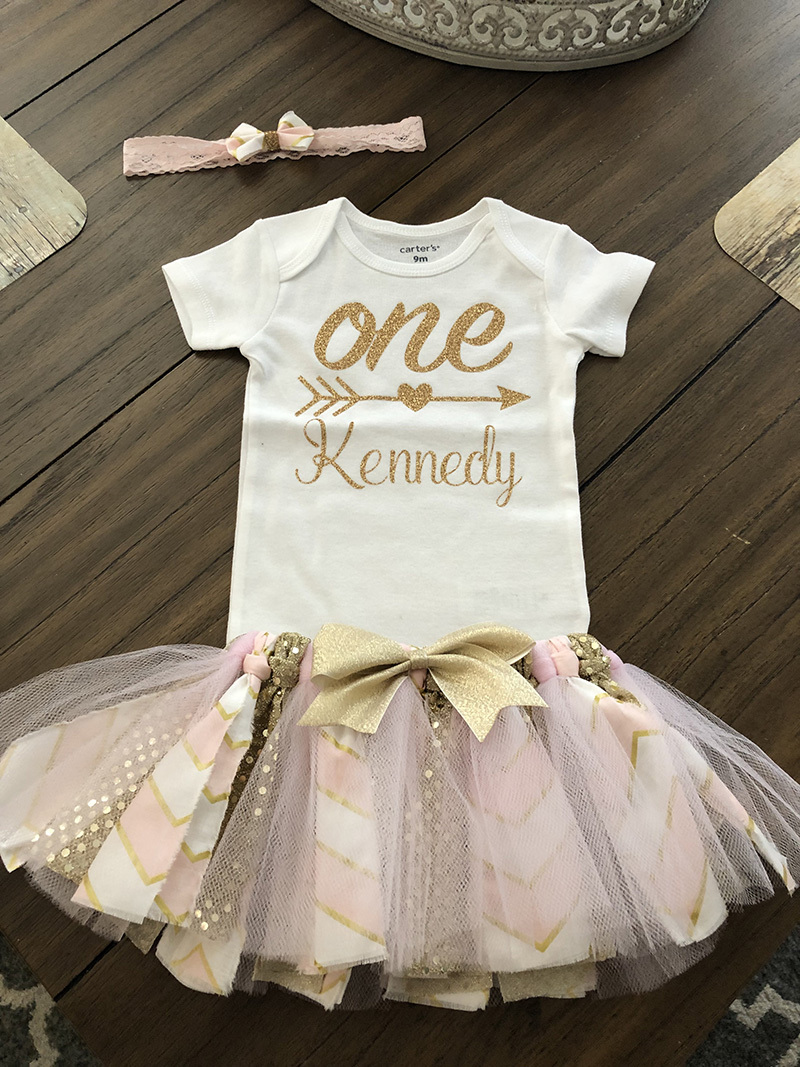 But next weekend is a different story. The couple is planning a three-pronged celebration with family converging from out of town. They’ll mark Kennedy’s arrival home, her first birthday and her baptism with one big party.

“I’m looking forward to giving her a cupcake and seeing what she does with it,” Brittany said.

She can’t eat it, but even if she just plays with it and ends up with smashed cake on her face, it will be fun to watch, she said.

Last year at this time, Brittany was carrying twins in her stomach. She couldn’t know what the next year would look like – the roller coaster of emotions she and Rob would go through as they grieved one baby and watched their other fight to survive.

This year is different.

“This year, Mother’s Day is going to be amazing,” she said. “Actually getting to hold my daughter and have her here at home is just amazing.”

At the same time, she and Rob will remember Kinsley, with whom they had so little time. “She’s missed every day.”

Kennedy is settling into a routine at home, sleeping well throughout the night. Her personality is still a bit hard to gauge at this point, but Brittany said she seems more relaxed.

“I can’t really explain it. She just seems at ease, like I’m home, this is where I’m supposed to be.”